Our last destination in Spain was Montserrat (saw tooth mountain) and the famous abbey  that sat on it. It was a short drive from Barcelona to the mountain. We stayed for a night in a hotel next to the monastery this enable us to view sunset from Montserrat. The sunset was not as stunning as we hoped because the weather was rainy and the sky was gloomy, nevertheless the scenery was still beautiful. 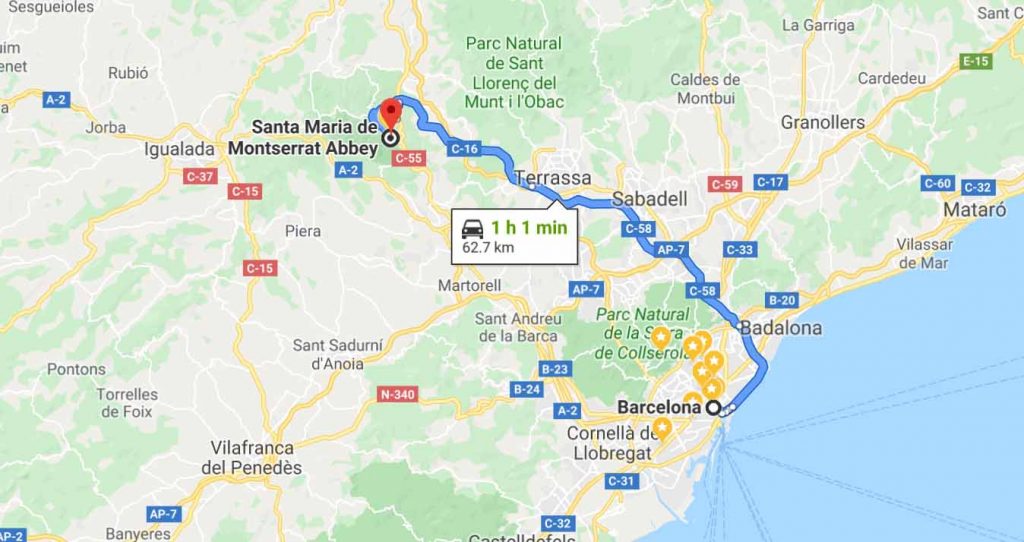 On hour drive from Barcelona to Montserrat

The drive to Montserrat was pretty uneventful until we were near to our destination when the landscape became fascination and captivating. The “saw tooth mountain” looked like a row of  weathered “column” rocks stacked standing up. 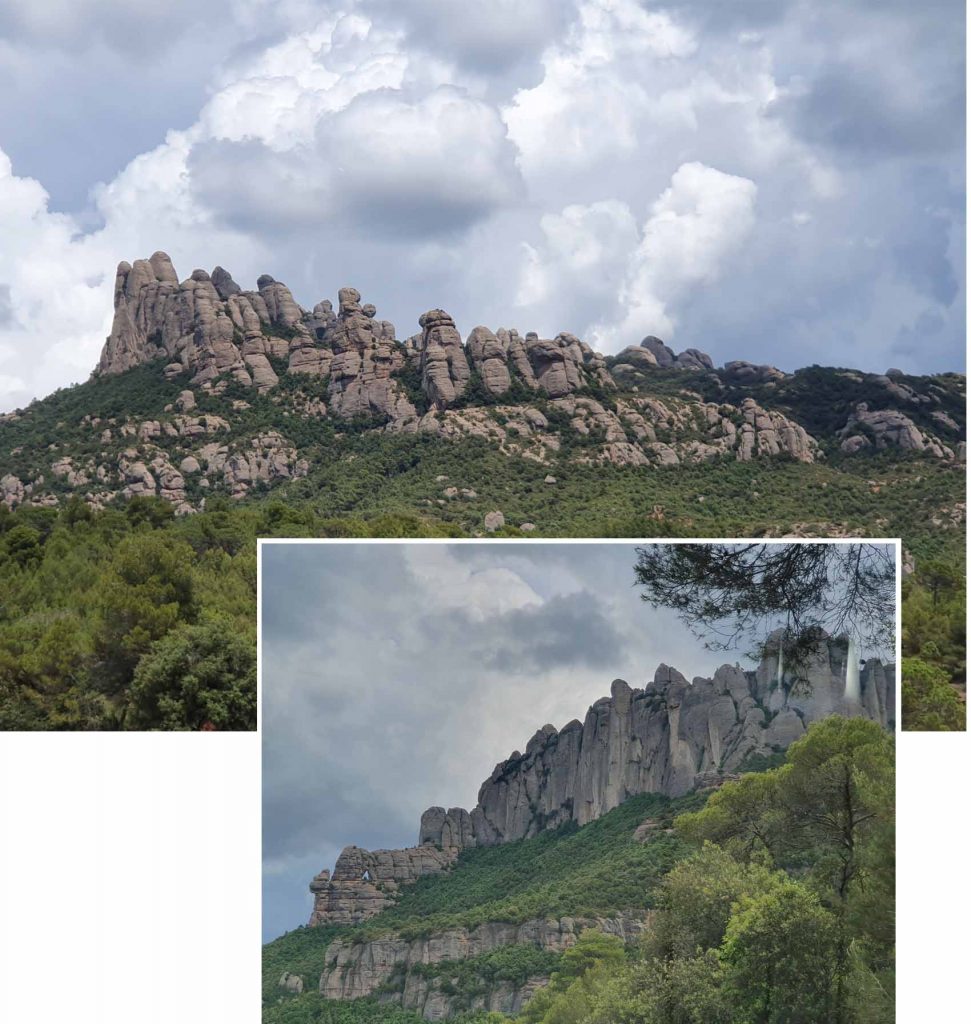 Montserrat was a multi-peaked mountain range north of Barcelona. The mountain was composed of a form of sedimentary rock which had a “tint” of pink color. The main attraction at Montserrat was a Benedictine abbey, Santa Maria de Montserrat. Around the abbey were two hotels, several restaurants and viewing decks that overlooked a “gigantic valley and faraway mountains”. 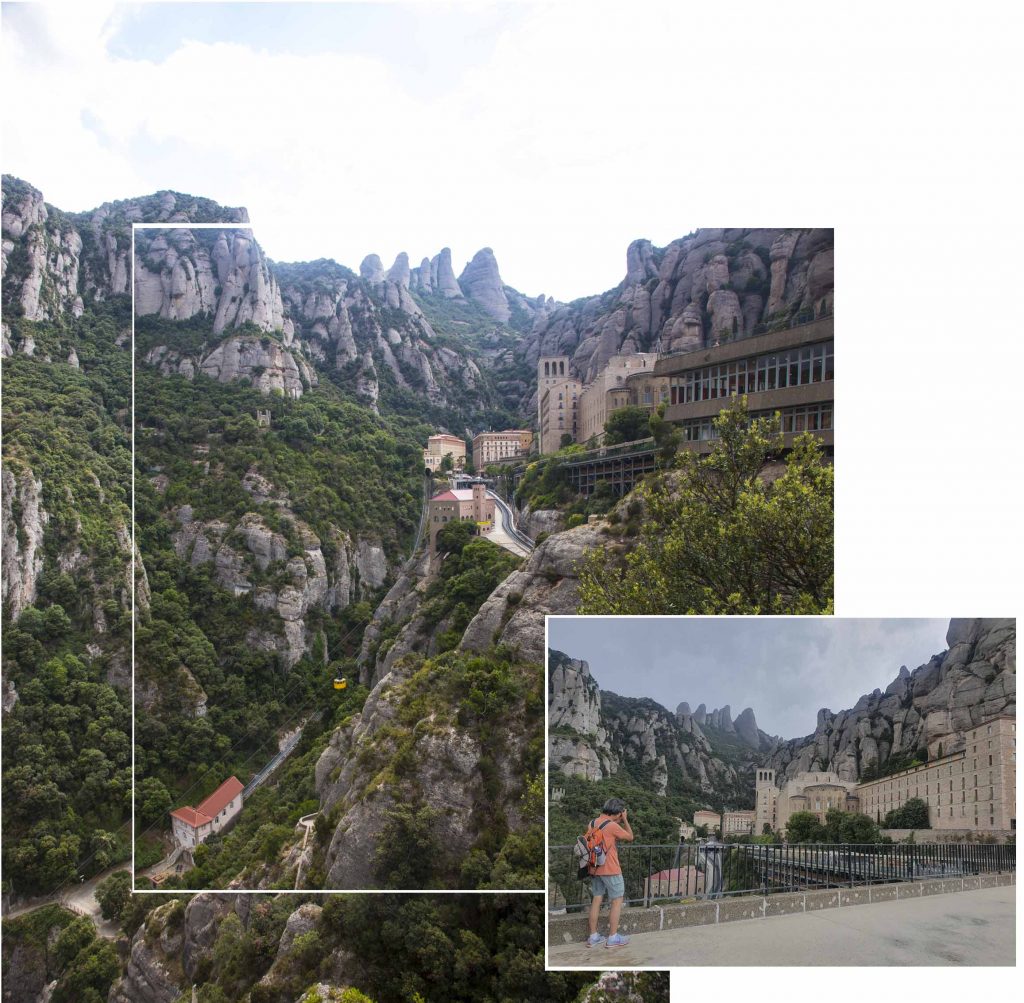 There were two ways to arrive at Montserrat, by rack railway or by car/coach. At Monserrat were three mountain train stations, two were funicular and one was a rack train. The rack train started from the foot of Montserrat mountain in a small town “Monistrol del Montserrat” bringing up visitors to the heart of Montserrat. At Montserrat was the lower station of Funicular San Joan which brought visitors up to the upper station. There was also another Funicular station that brought visitor to another lower station where visitors could start their trekking. 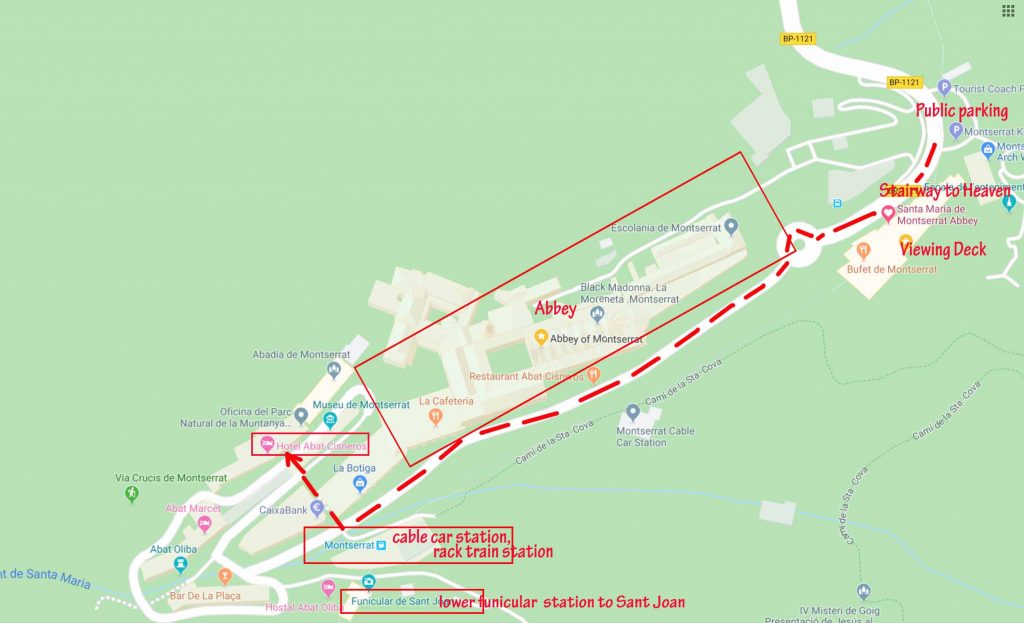 We managed to drove all the way to our “stay” which was directly beside the abbey to off load our bags and complete our check-in. Unfortunately we were not allowed to park at our stay or anywhere in the immediately vicinity. We had to leave our car at a public parking just before the “central of attractions”. 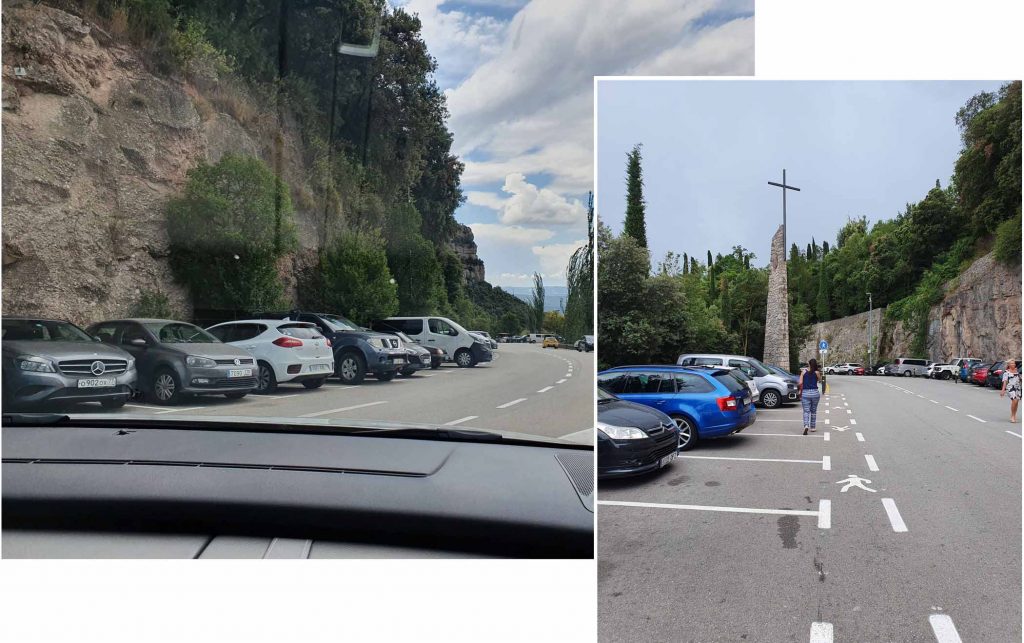 The day was gloomy and rainy so the sight at the viewing deck was not at its best. At the deck was a large structure consisting of several huge square and rectangular blocks irregularly stacked up. The structure was called the “Stairway to Heaven” and we had seen photographs of people climbing up to the top for a view. Unfortunately it was barricaded so we could not go up to the top.

There was a huge cafe/restaurant nearby so we went there to relax and have our coffee break. We stayed till about 5 pm before seeking out another restaurant for our dinner, then returning to our “stay” for a rest. 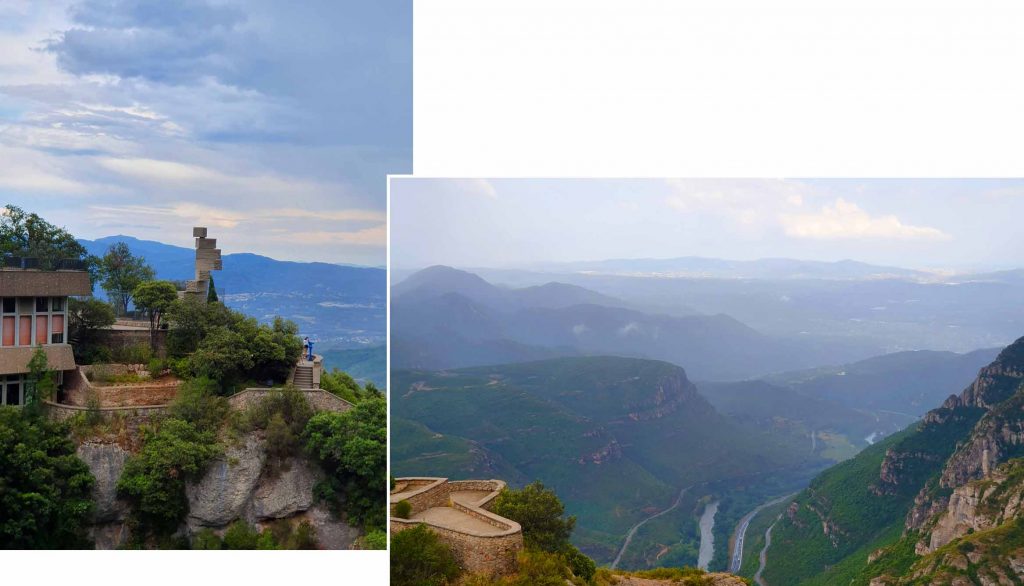 We were back at the viewing deck again at 8.45 pm. By now the whole place was deserted and the cafe/restaurant where we had our coffee break in the afternoon was closed. Most visitors had already left the mountain as Montserrat was a popular day-visit place. We were hoping to catch a good sunset view. The view was slightly better than the afternoon view but it was still “blurred” out by the gloomy sky/mist. 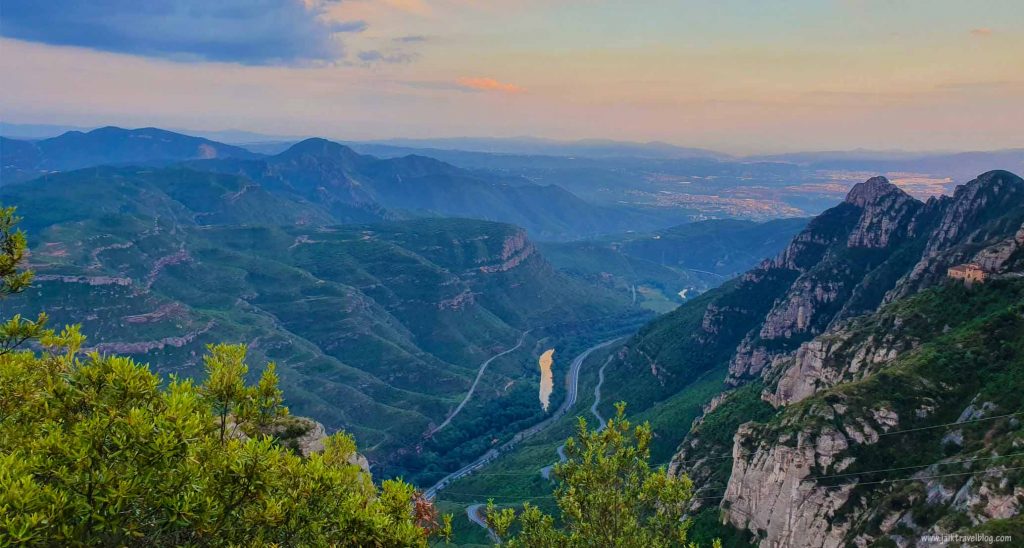 The abbey was just beside our stay. The monastery was founded in the 11th century and rebuilt between the 19th and the 20th centuries and we understood that till today there were alway roughly 80 monks in residence. 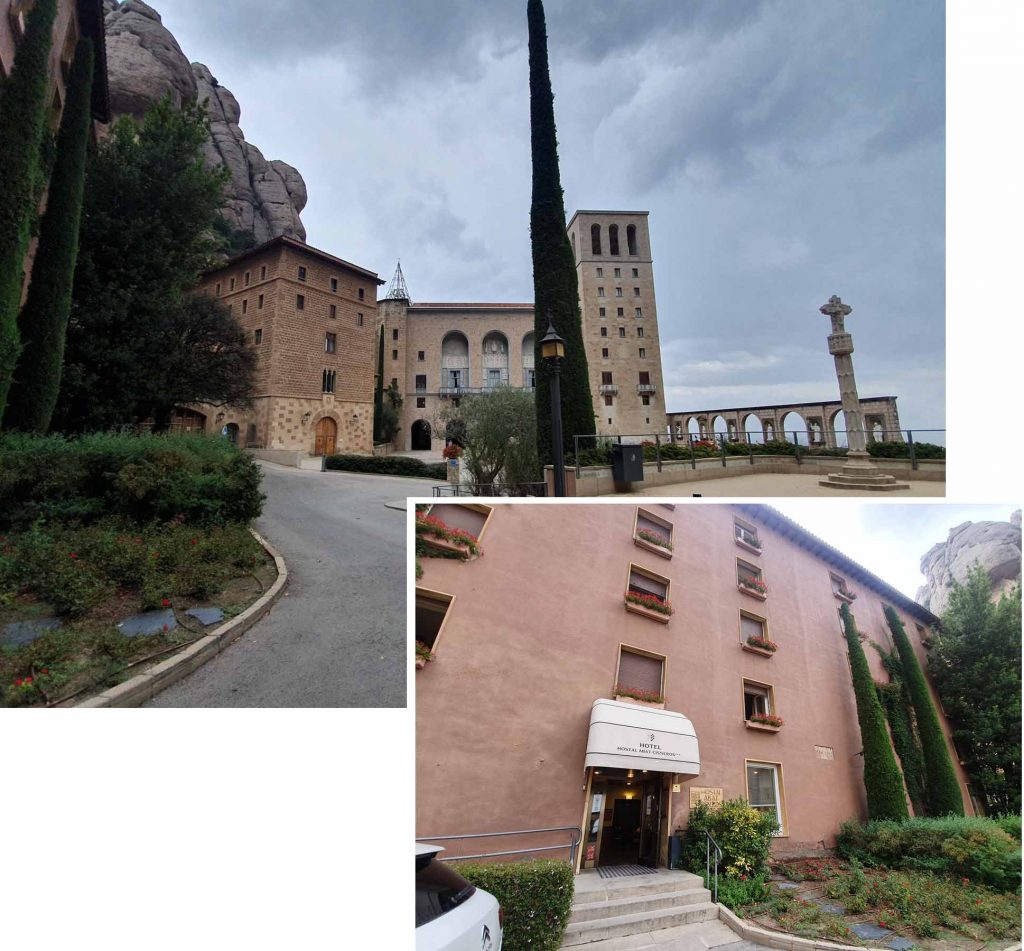 Our stay was just beside the Monastery

From our stay we walked into the Abbey entrance. It led to a huge courtyard with a huge “wire” head sitting in the center of the courtyard. 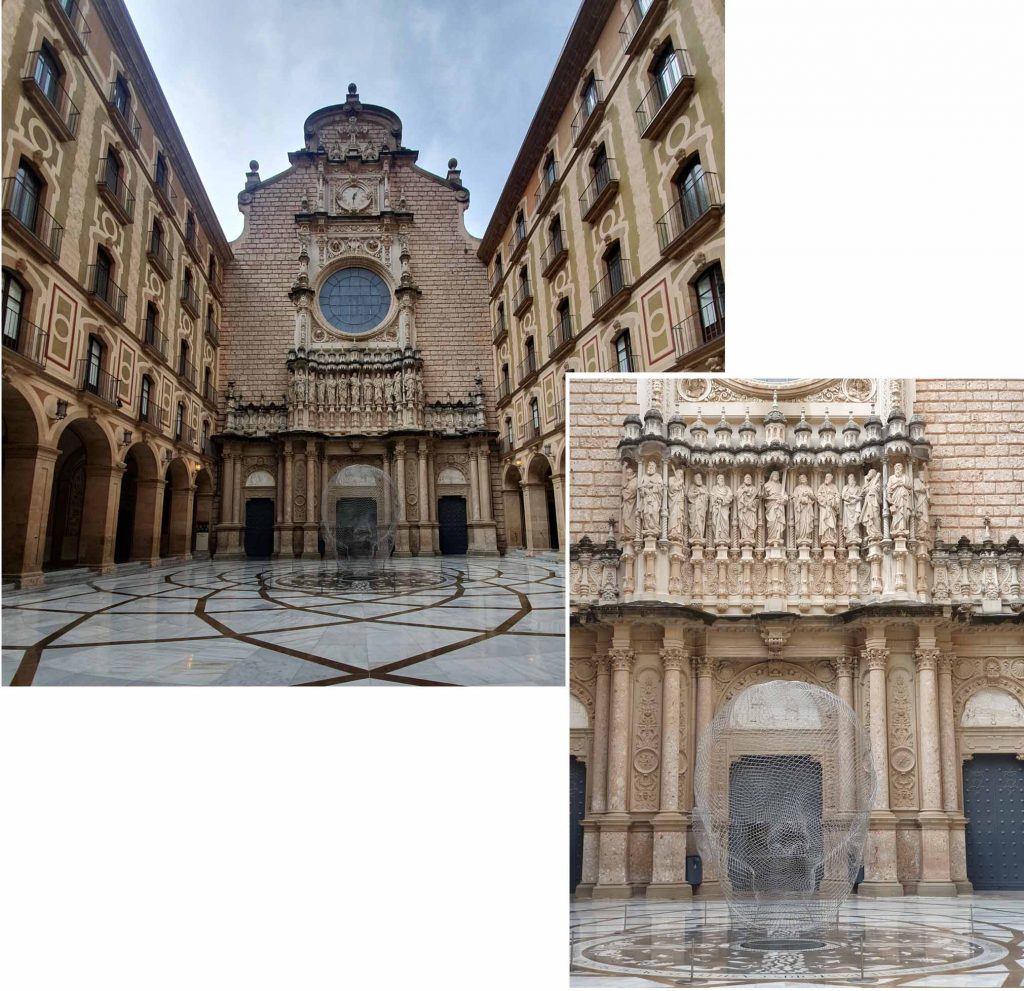 Courtyard in the Abbey

Walking further into the compound we came to the “church/basilica” part of the abbey. The basilica began construction in the 16th century and after being destroyed in the Peninsular War it was rebuilt in the year 1811. In 1881 the pope granted it the status of minor basilica. 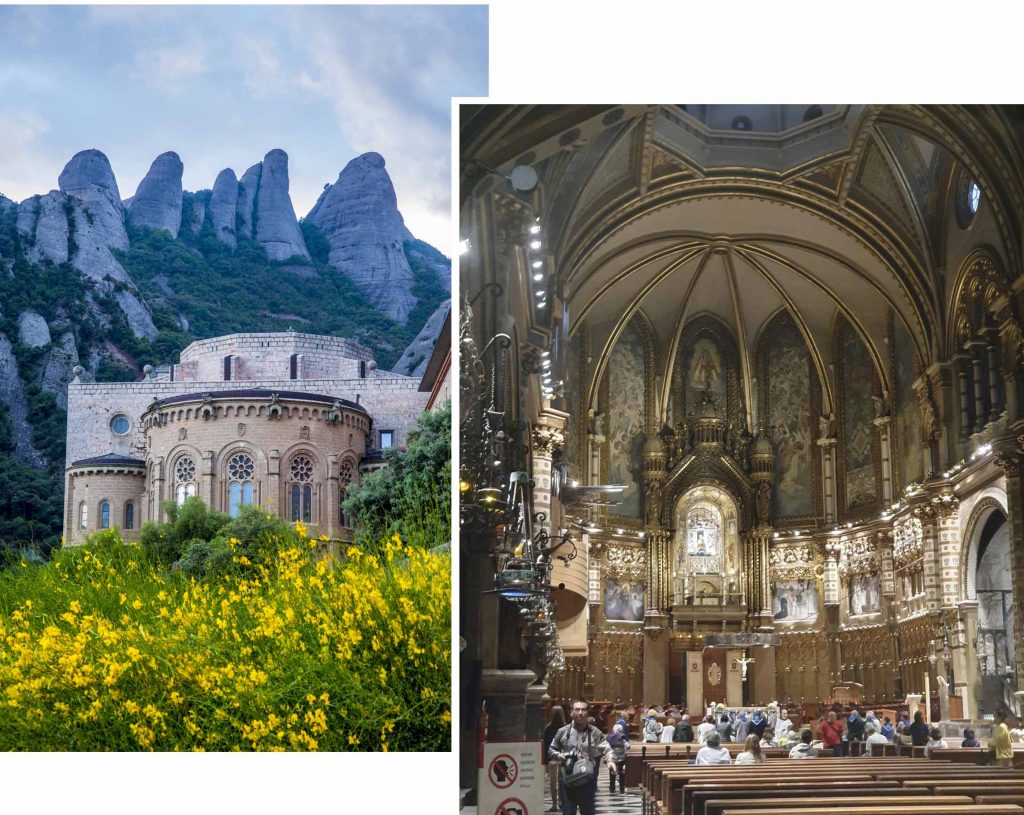 Our stay was a twin room at Hotel Abat Cisneros Montserrat  which we had booked on booking.com. The cost for a night €106 for a night with breakfast the next morning. There was no parking onsite and we had to leave our car at a public (free) parking some 300 m away. 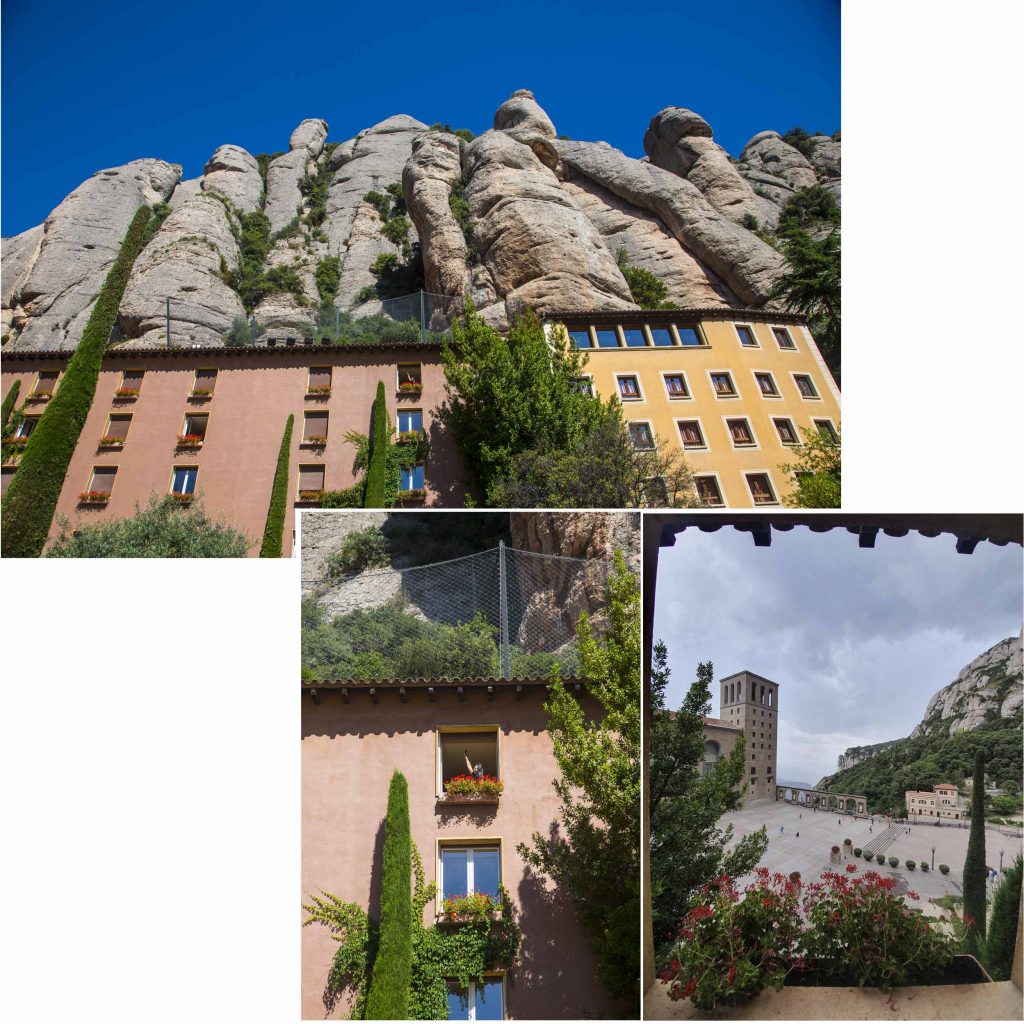 The room cost was very expensive but we had no choice as there were only two hotels at Montserrat and the other hotel cost even more. Our room was on the four level, it was a large and clean room with ensuite toilet. From our window we could see the big square just outside the abbey. 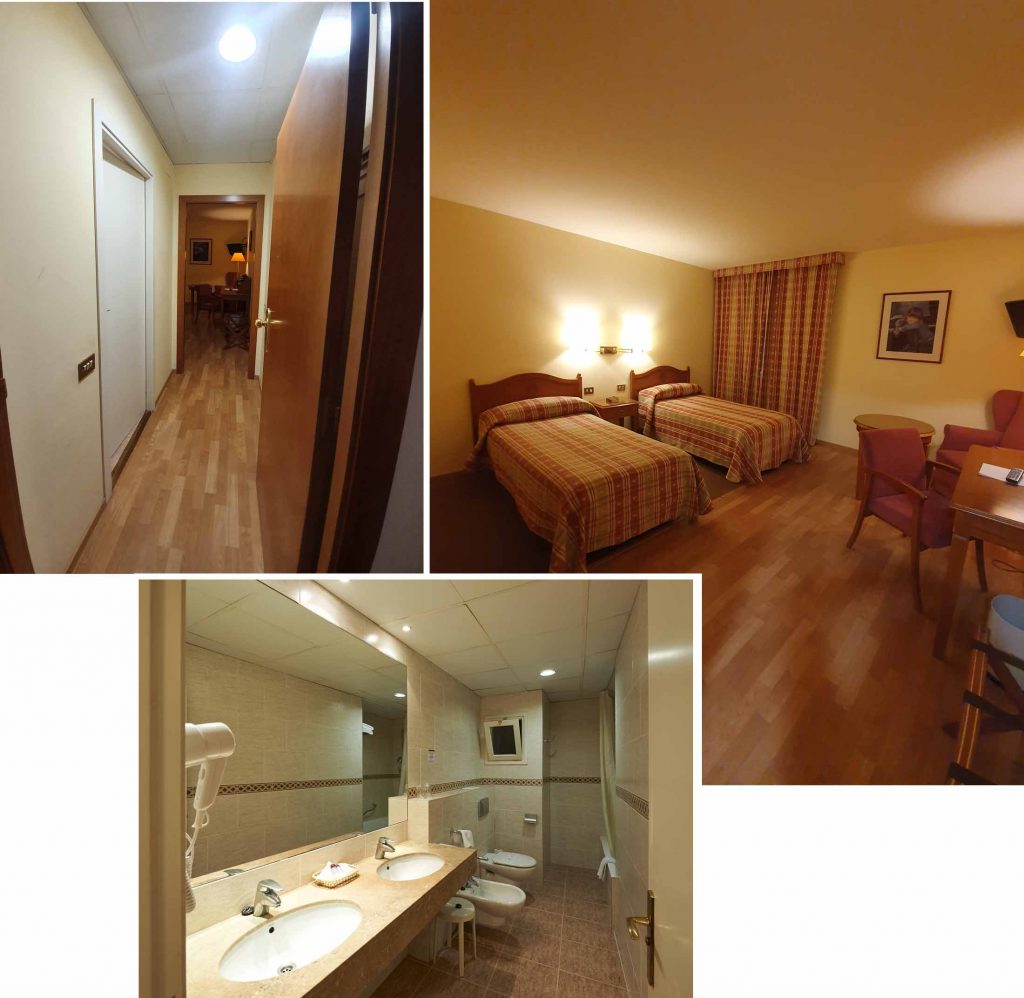 Breakfast at the hotel “breakfast” hall the next morning was very good. It was standard Spanish breakfast comprising of cheese, bacon, sausages, bread, crossiants and beverages. 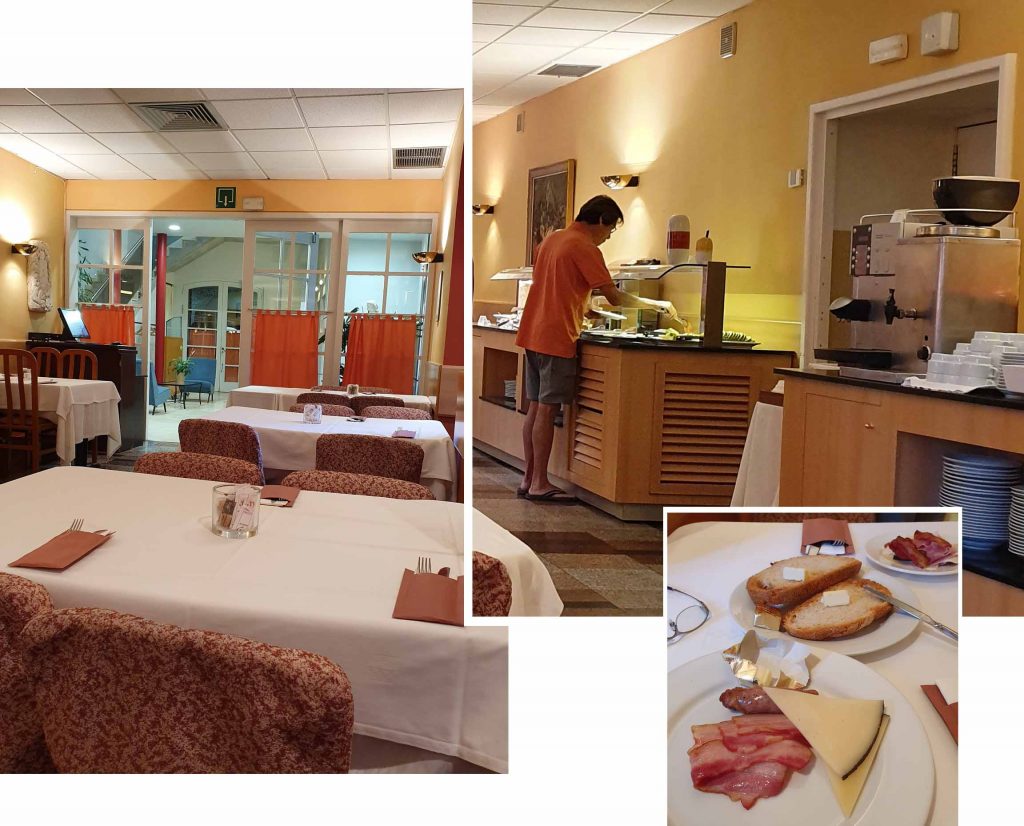 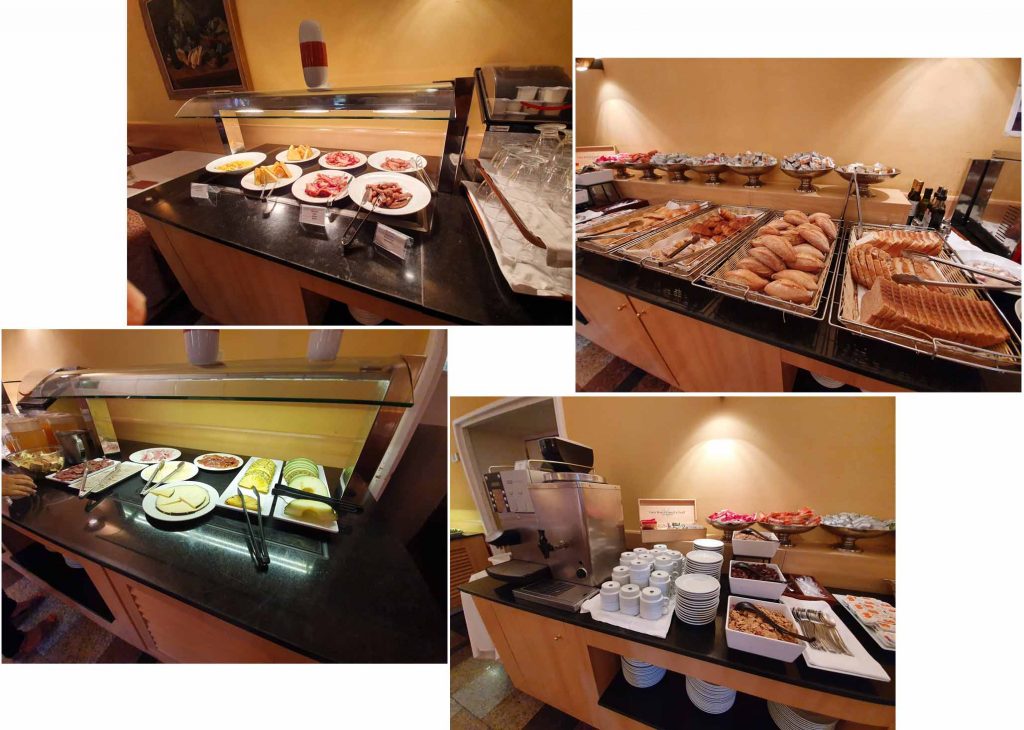