The Hawaii  Archipelago had 137 islands stretching over 2400km. At the southern end of the archipelago were eight main islands known the Main Hawaiian Islands. Six were habitable (visitable), one was a private island for farming and another has no people living on the island and was off-limit to public. 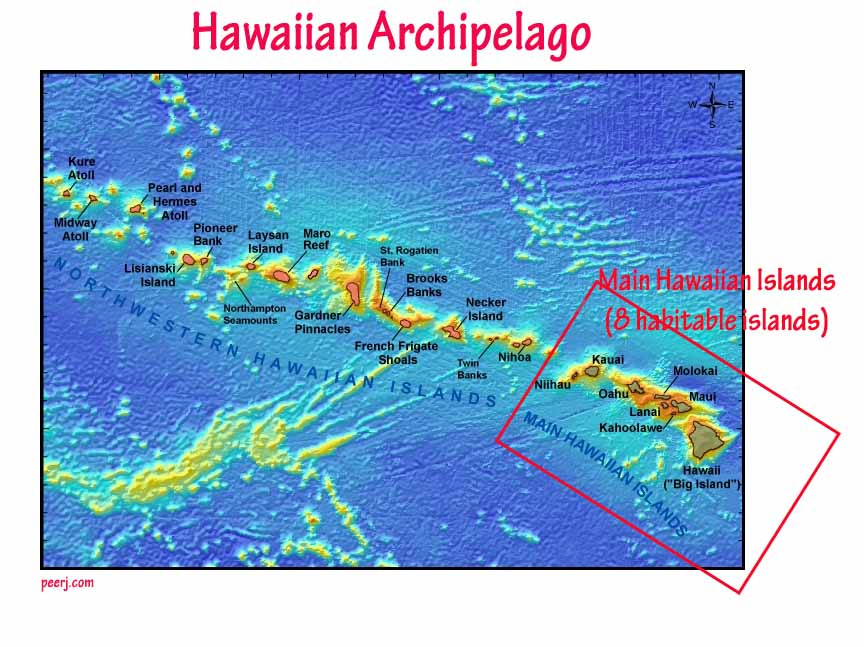 We visited four of the six habitable islands, definitely the more popular ones. We had a week each for Oahu, Kauai, Maui and Big Island. These four islands had very different characteristics and each showed very unique sides of Hawaii. A week on each of them allowed us to explore them well and to have time to relax on beautiful beaches and soaked in the “Hawaiian” ambience.

Two years ago there was a plan to visit Hawaii but was dropped because we thought Hawaii seemed too similar to Singapore, hot and green so we rather visited Europe that year. If we had visited Hawaii two years ago we would have been able to see active lava flow on Big Island, we would be able to walk on the cooled lava and catch glimpse of red hot lava through the cracks of the lava rocks below our feet. Unfortunately a year ago in 2018 there was a volcanic erruption on Big Island. That eruption was the LAST! So forever on Big Island after a million year since the first erruption the “active lava flow” moved off. 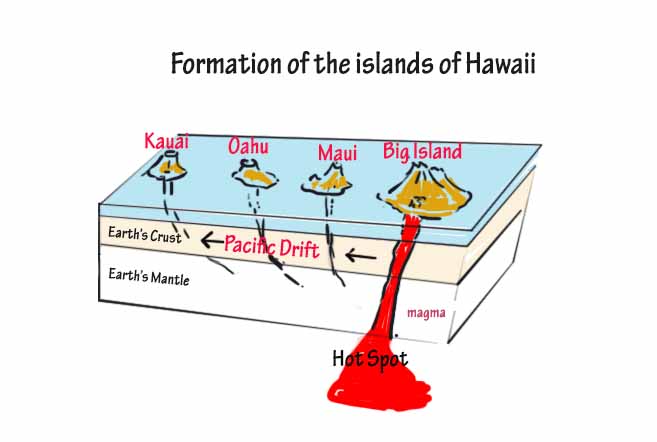 The islands of the Hawaiian Archipelago were created from “hotspot” deep below the crust in the Earth’s Mantle. The magma burst out of the hotspot creating volcanoes under the ocean. After many rounds of eruption the volcanoes rised above water level creating islands. These volcanoes remained active as long as the hotspot continued sending up magma. While the hotspot remained fix in position the volcanoes on the Pacific plate moved along with the plate. In time the volcanoes/islands moved past the hotspot and magma no longer flow up the volcano. 2018 was the final last erruption on Big Island as the island drifted away from the hotspot cutting off the flow of magma into its volcanoes. Forever the “active lava” sighting left Big Island. A new island  forever.

The hotspot was already creating a new island under the water. This island was 20 miles (32 km) off the south coast of Big Island and was named Lö’ihi Seamount. As of now the island was about 1010 feet (308 m)  above the ocean floor and would need to grow another 3100 feet (945m) before it surfaced out of the water. That would need about a few tens of thousands of years.

Expenditure for the four weeks in hawaii

The total cost of our four week trip for two of us added up to SGD$10,000 or about USD$7300. We managed to save on one week of accommodation by staying at my brother’s place on Oahu/Waikiki.

On the the whole, accommodation cost was expensive. Luckily we only paid for three out of the four weeks of stay. As for food the cost was pretty reasonable and affordable. The cost breakdown was as below

We only had a week on each island, so we could only pick the more unique and popular attractions to visit. There were many hiking tails but we took on only those that were “doable” for us. Hawaii was indeed more beautiful than our expectations.  Both Hawaii and Singapore were located near the equator and had similar not climate, yet Hawaii was so different from Singapore. Singapore was a tiny island surrounded by huge neighbouring countries, Hawaii was a group of tiny islands in the middle of a huge Pacific ocean. That probably accounted for its huge waves and breezy nature. Its greenery was so much more vividly greener than the greenery in Singapore. Its ocean color had these mixtures of mesmerising blue, green and turquoise shades. It had volcanoes and unspoilt landscapes that were formed tens of millions of years ago.

There were too many beautiful places on each of the four islands and many had to be forgo. For those places that we had managed to explore, the most memorable one for of the four islands were view of Wakiki at Diamond Head Summit for Oahu, ?? for Kauai, Haleakala Summit for Maui and volcano crater .. for Big Island.

Would we visit Hawaii Again?

Yes we would definitely visit Hawaii again. We would want to be back when the whales were there in Maui, we would want to see Napali Coast from the coastal side on Kauai, we would want to visit Mauna Kea Summit for sunset on Big Island. On Oahu we wanted to enjoy more of Wakiki holiday lifestyle and hike up “Stairway to Heaven” (hopefully it would be open to visitors then).

Hawaii we will be back!