The plan for today was to spend most of the day at the Hamamatsu kite festival. Sometimes in the mid afternoon we would drive north to Lake Motosu (one of the five lakes at the base on Mt Fuji). For the night we would stay at a lodging at Lake Motosu. 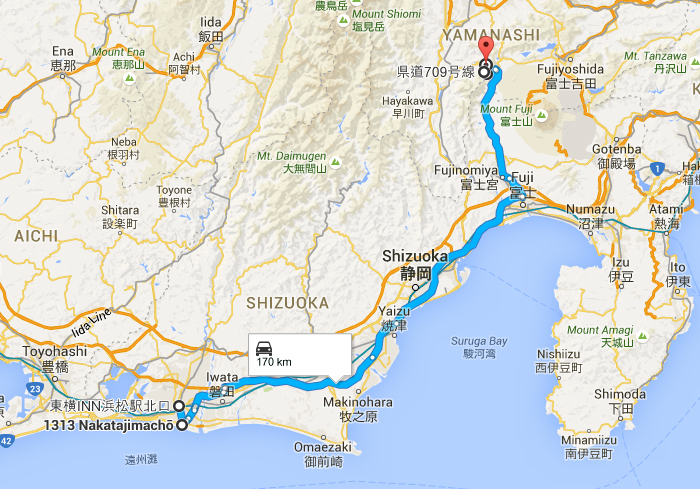 We at a great day at the Kite-War event, it was an interesting cultural experience and we had fun. At later part of the day on our way to Lake Motosu we were caught in our first major traffic jam. We reached Lake Motosu late but still not too late to enjoy the mysterious and beautiful view of  Mt Fuji from the lake.

This was our third breakfast at a Toyoko Inn. The breakfast items were pretty standard even though we were in a different Toyoko Inn hotel. Our only  regret was that the coffee was very bland and tasteless. How I wished for a good cup of aromatic cafe latte. 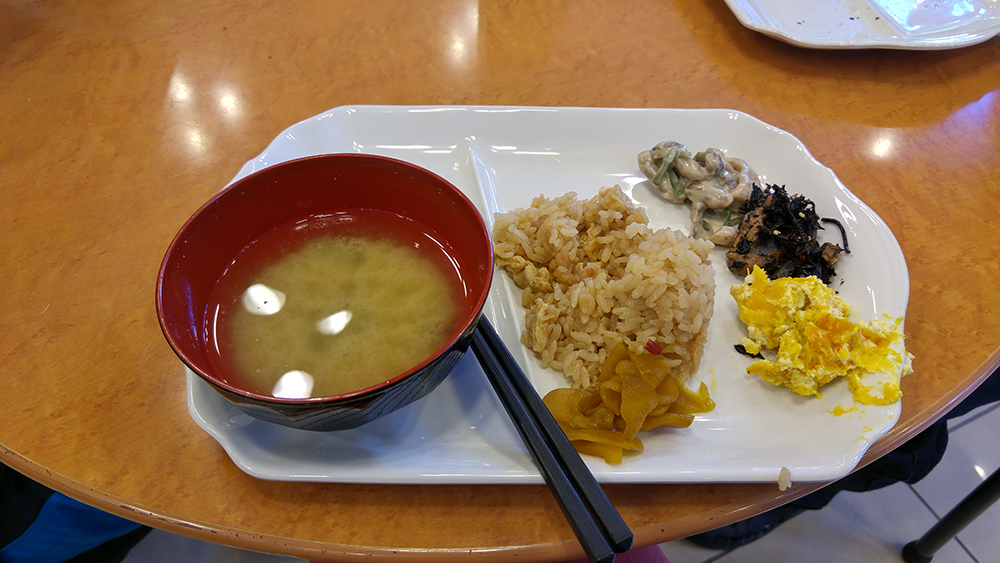 On our way to the festival site

During my research on Hamamata Kite Festival, I found out that the city counsel advised visitors to park their cars at some designated train stations and to use free public transport to get to the site. We decided to take a risk and drive our car to the car park at the festival site and if not possible to park in a nearby neighbourhood and in the worst case to heed the city’s advise and park at the designated stations and take transport to the festival site.

I had looked at the map around the festival site and there was a huge car park near the site. From our hotel to the car park was about 5.5 km, but less than 1 km from the car park, just after the Expressway 1, the road was barricaded! We detoured and slipped past the another barricade and drove into the estate near the festival site, unfortunately there were no suitable place to park our car and it was not possible to park by the roadside of the estate. 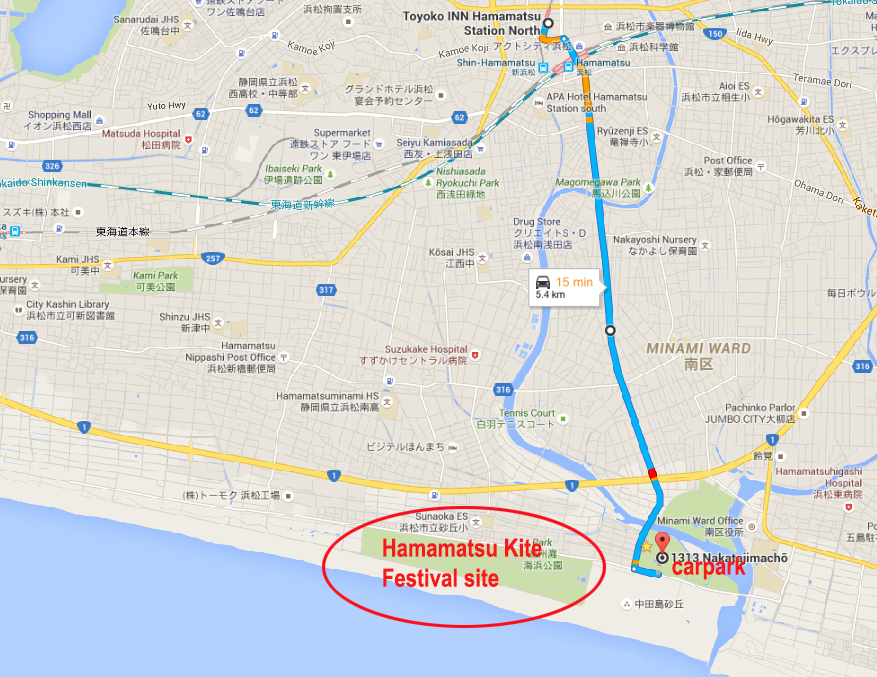 Route from hotel to carpark near the Kite Festival Site

As we searched for a car park we drove further and further away from the festival site. There were some car parks on the other side of the Expressway 1, we tried parking in one of them and were told to leave as it was meant for cars with official labels. We finally parked at another car park that seemed unattended, but on our way out a security guard appeared out of nowhere and communicated with us through all sort of gestures that the car park was meant for patrons of a game arcade. We were so disappointed and looked so lost that he took pity on us and let us parked. What a great guy!

The walked to the festival site was about 1 km, on the way we saw many people walking along the same direction. It was about 10 am and the visitors and participants were coming in fast and furious. 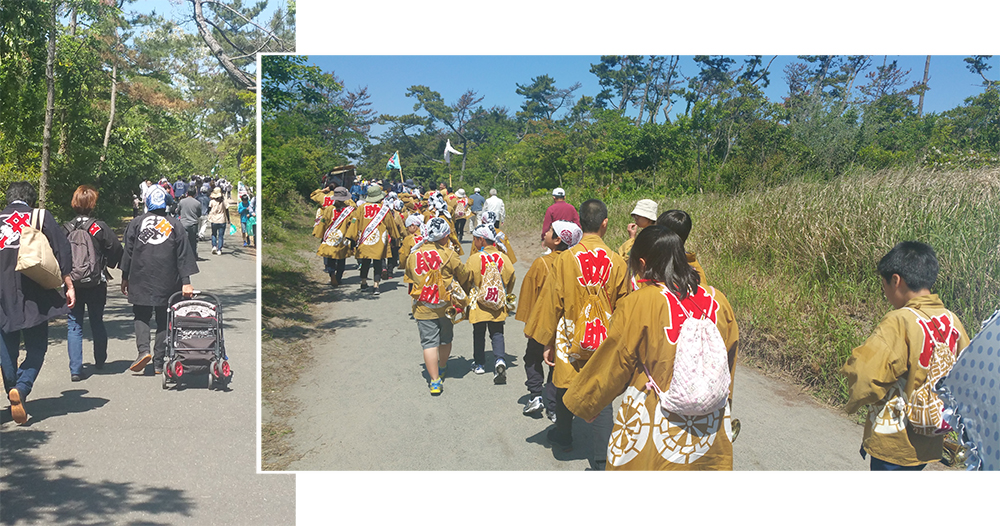 Walking to the Kite festival site 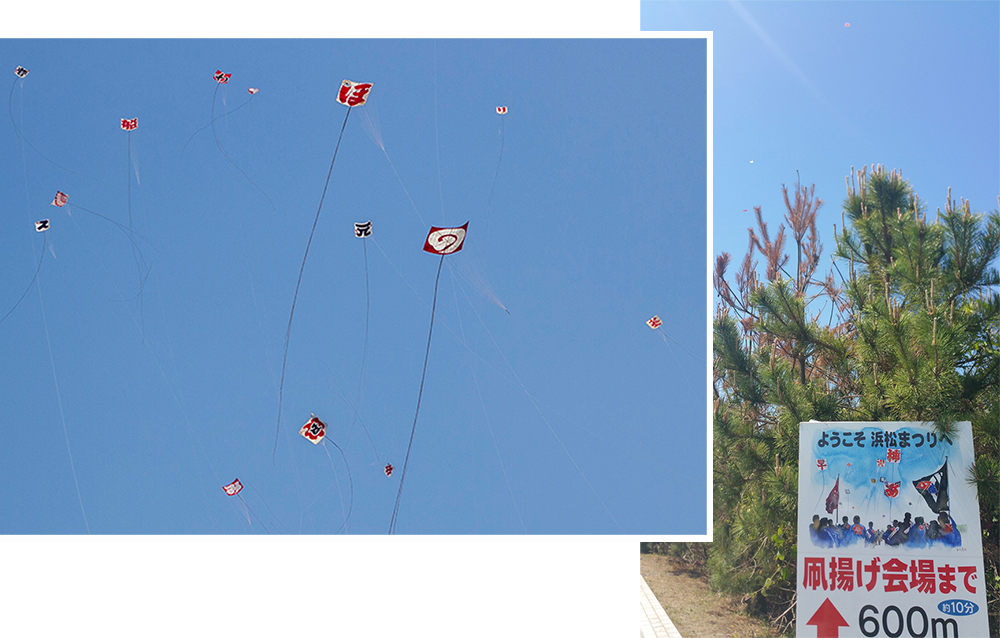 On our way to the Kite Festival Site

Wow the kites were much larger than our expectation. All the kites were rectangle in shape but each had their own logo. They were so huge and had as many as 10 to 20 handlers per kite. 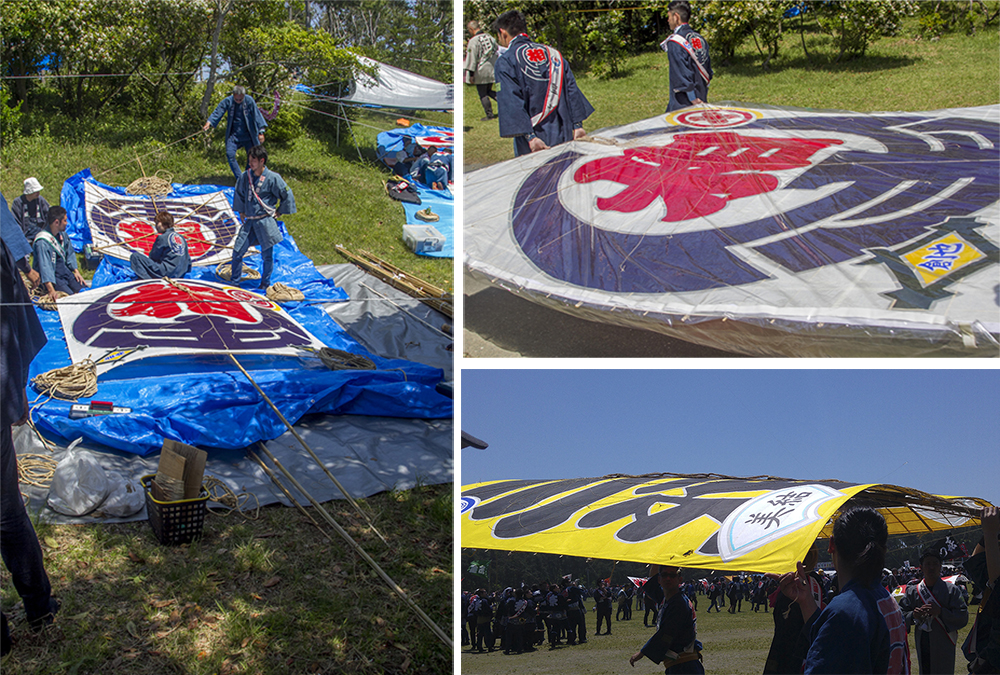 Participants getting their kites ready

The kite festival site was packed with people. Participants and spectators. The team participants wore similar getup and there were so many teams. At the far end of the field were rows of food stalls and on another end were row of tents used as resting place for the participants. The whole place was very rowdy and festive. The sky was cloudless which was just great as the kites flying high up in the sky could be easily spotted.

We stuck close to a few teams to see them launching the kites into the sky. Before the kite flew up the team spent a lot of time laying it out on the ground and making sure that the ropes that were tied to the kite were fully untangled. Once ready the kite took off very fast. In fact so fast that we had to jump out of the way of its rope tail that swung like a whip lashing out wildly as the kite took off. 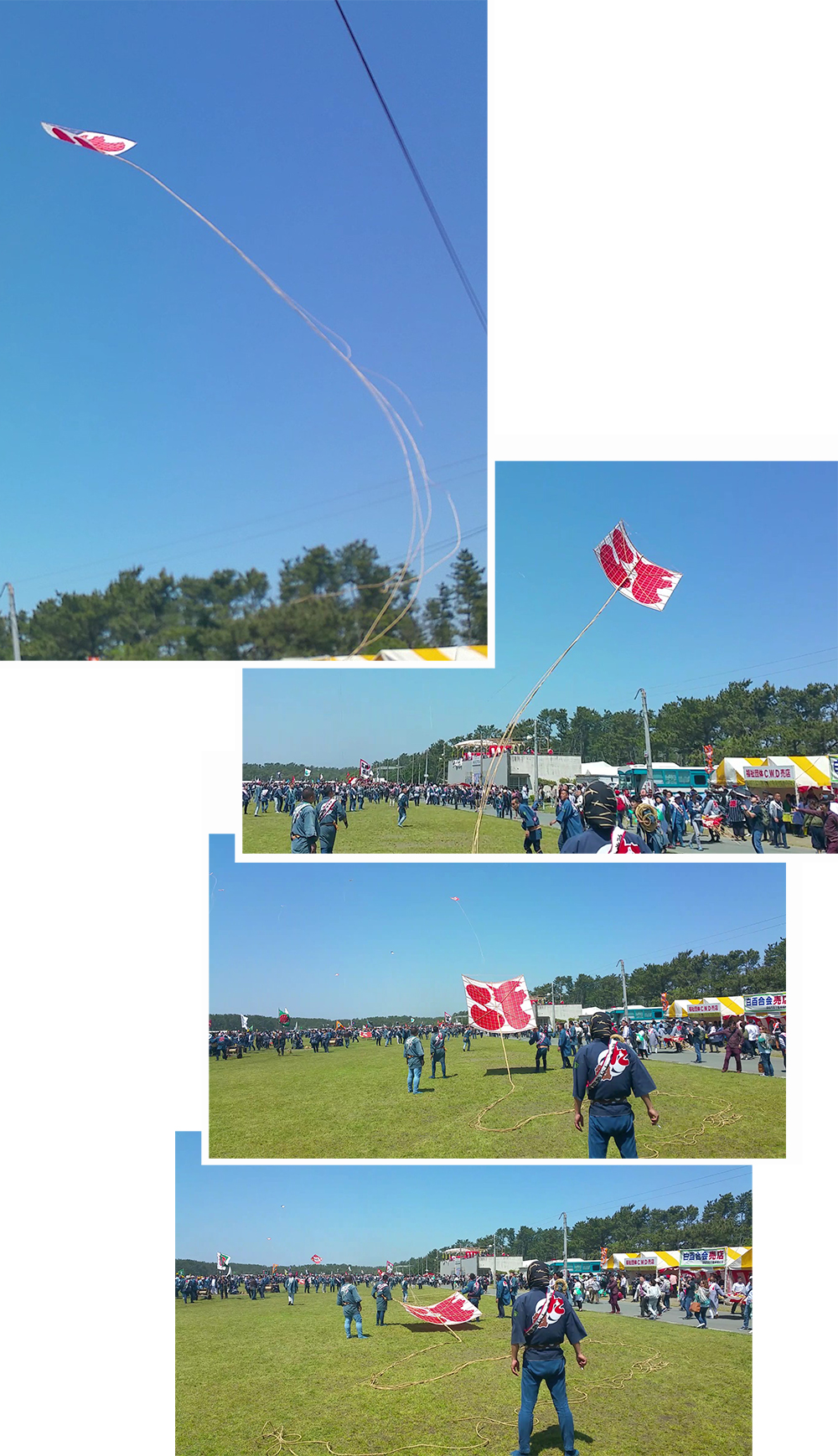 Another kite taking off

After the kites were up in the sky, the participants had to fought hard to keep them up in the air. A lot of skill, technique and energy was needed to keep the kites from falling. It was a kite war, attack and defend.

Teams of kite handlers dashed back and forth, pulling and releasing the ropes. Up in the sky some kites were engaging each other, their ropes crossed and uncrossed, some twirled out of control, some flew higher away from the war zone. Below on the ground the handlers seemed to be having another kind of war, a war with the ropes that seem to have a life of their own, wanting only to break free. 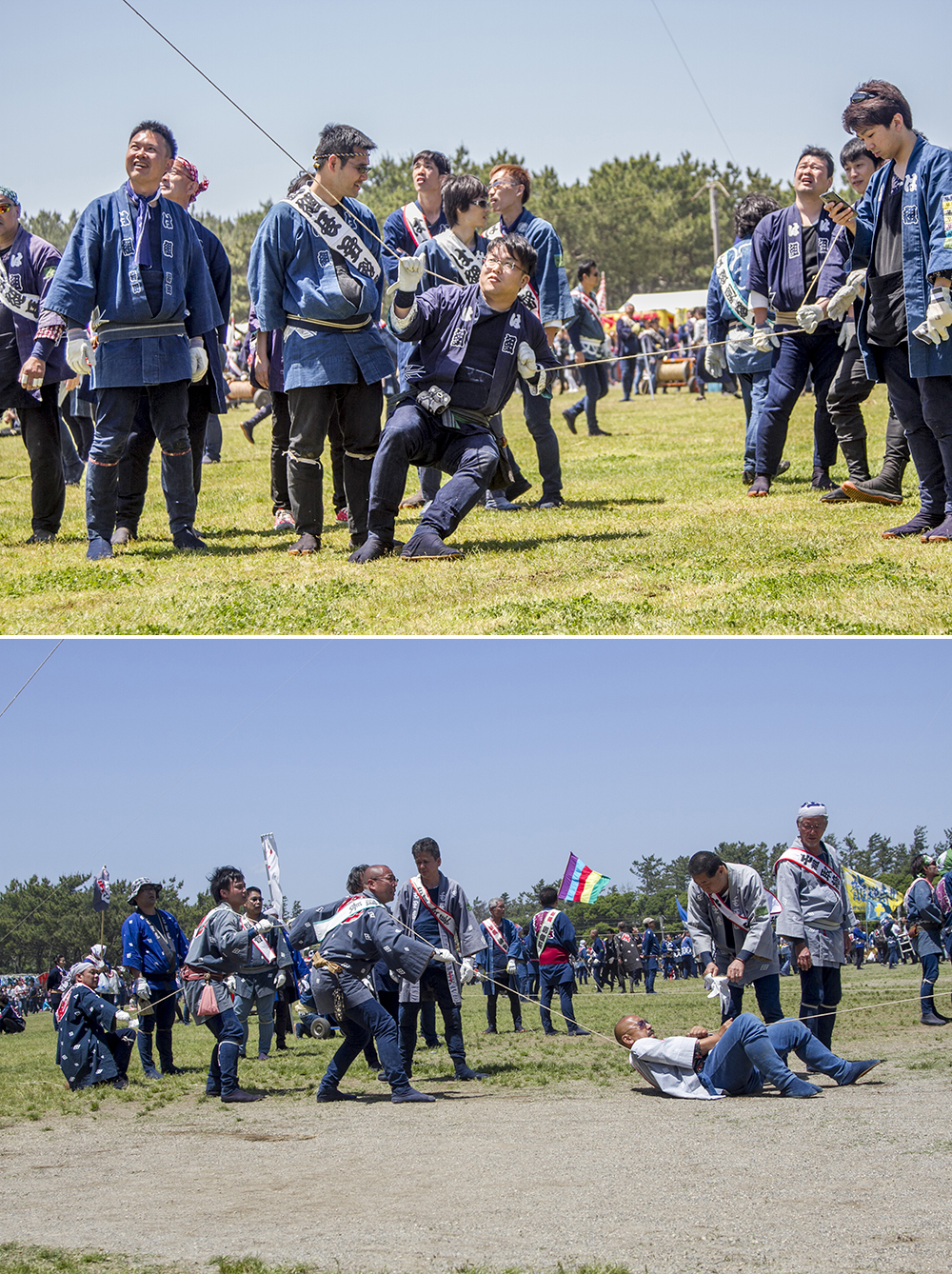 Participants fighting hard to keep the Kite Up in the sky

Not all kites had a good ending, it was after all a battle and casualties were expected. When a kite fell it could get pretty dangerous for those people on the ground if they did not get out of the path of the kite. We had to constantly look up and take cover when we heard shouts and be ready to jump out of the way of crashing kites. 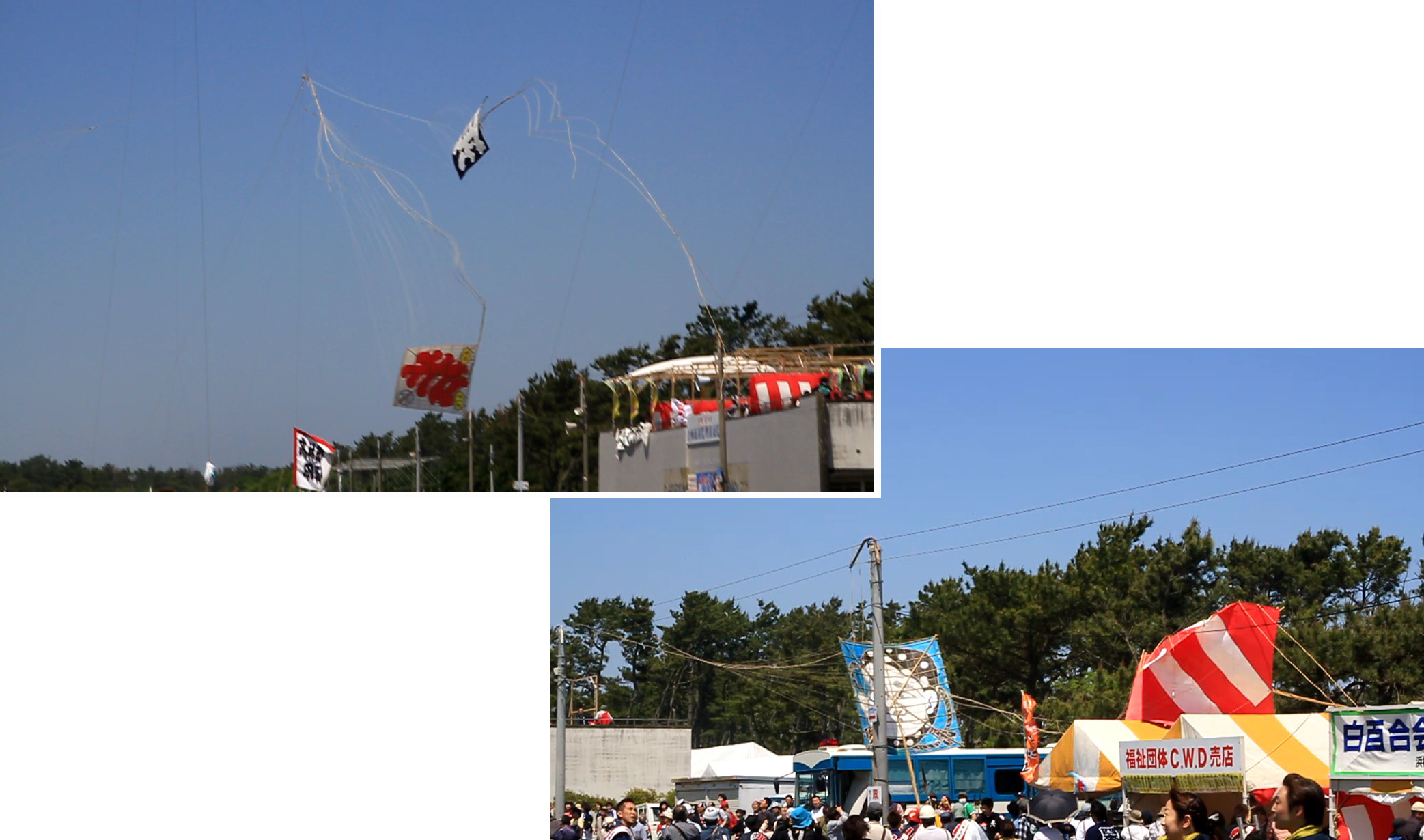 The crowd grew bigger at the day proceeded. This once a year event started in the 16th Century when large kites were flown to celebrate the birth of a baby son to the Lord of Hamamatsu Castle.

By 2 pm we were off to the food tents at the end of the large field. We bought some food and found a shaded place under some trees to eat our lunch. It was cooler and  safer to stay under trees, they provided shade from the hot sun and shielded us from falling kites. 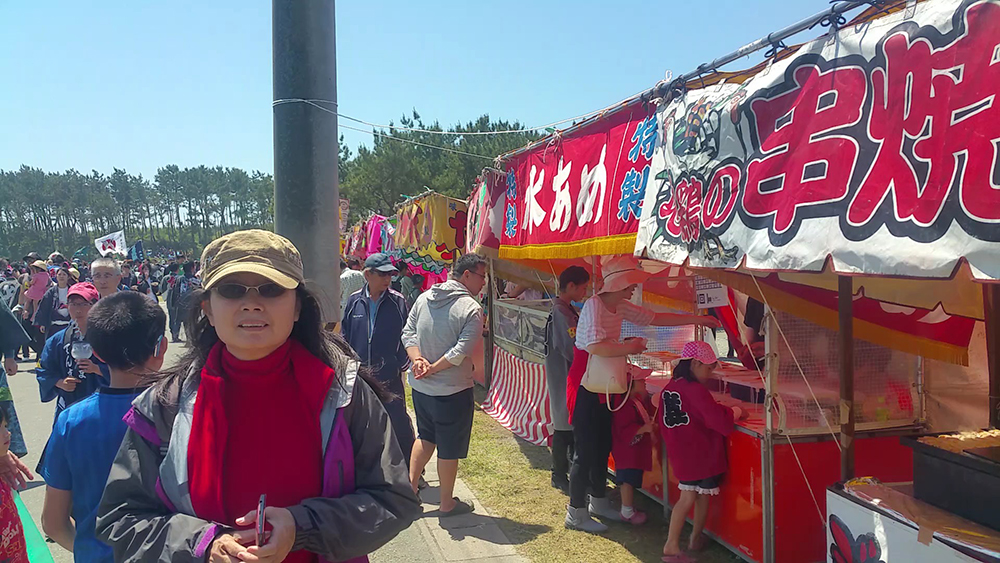 At about 3 pm we left the festival feeling very happy as we had again experience another Japanese cultural tradition.

On our way to Lake Motosu

The drive to Lake Motosu was about 165 km. Our car GPS systems stated that we needed 4 hours whereas our  google map stated 3.5 hour. From these few days of driving experience we learned that the car GPS system estimated the driving duration based on road speed limit, it did not take into consideration of real time car driving speed. Google map gave better estimates.

Our google map showed a bad traffic congestion about 10 km from our destination. We were not too worry about it as we thought that we would need about two hours to reach the congested section and by then the vehicle congestion would have cleared.

Midway we stopped at a expressway rest stop, Neopasa. This place was huge, it was bursting with shops, cafes, restaurants and people. It was supposed to be a “pee” stop for us but we were so captivated by all the activities that we stopped for ice cream and cafe latte. 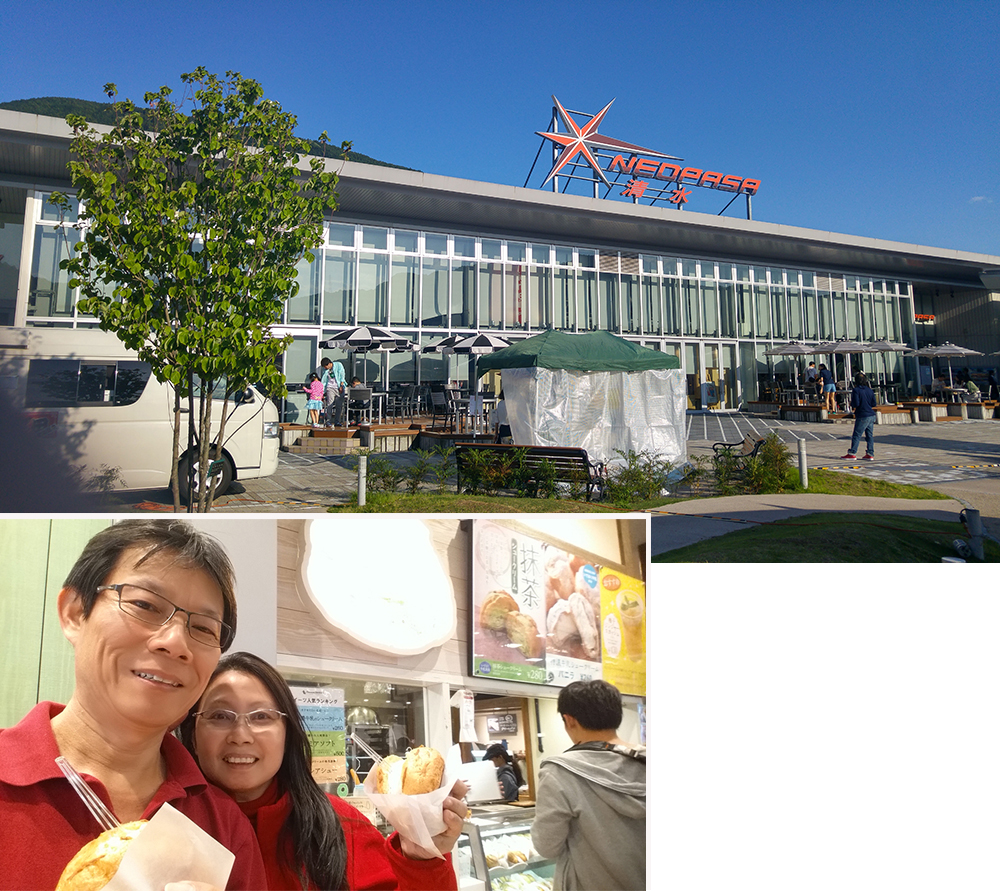 After a nice break we were back on the road driving towards Lake Motosu. Soon Mt Fuji came into our view, it was a nice clear day and we could see the snow capped top of Mt Fuji clearly. We were glad to be able to see Mt Fuji so clearly, we heard of tales from friends who told us that they had to leave Japan without catching sight of Mt Fuji because of the gloomy weather. 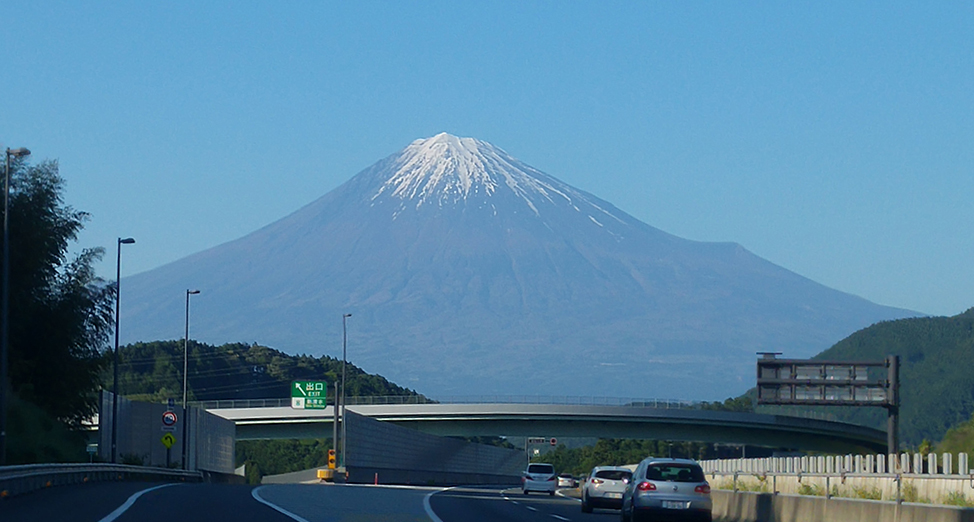 At about 5.00 pm we reached the section of the road, where there was an earlier vehicle congestion, thinking that the congestion would have cleared up. Well we were definitely wrong, the situation had worsen. It took us more than an hour just to clear that 1 km stretch. 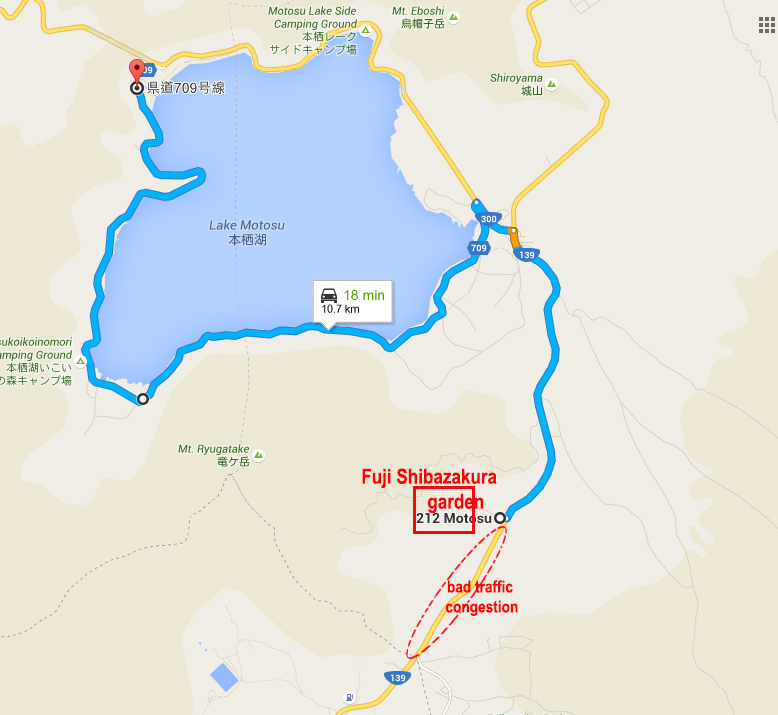 Bad Traffic Congestion at Turn off to Fuji Shibuzakura Garden

The congestion was due to the two turn offs to the Fuji Shibazakura Garden. I knew that Fuji Shibazakura flowers were in their full blooms during the Japanese Golden Week and many visitors would come to the garden. But I did not expect the visitors would cause such a huge scale traffic congestion. Regretfully there was only one road leading to the garden and that road was also the only road for us to get to Lake Motosu.

5 pm was also the closing time of the garden and the traffic wardens of the garden were stopping cars along the main road to make way for cars that were driving out of the garden carpark. This was a very badly managed situation as their actions had caused a huge long congestion on the main road.

We finally arrived at Lake Motosu near to 7 pm, we were hoping to reach the lake at about 5 pm as we would like to drive round the lake and explore good view points beside those that I had identified. 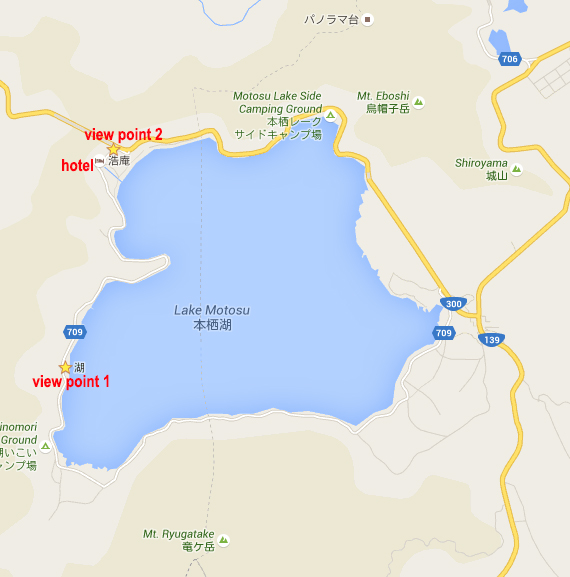 We drove by view point 1 but did not come down to explore as the view did not seem very impressive and we drove straight to our hotel for the night.

View point 2 was just a few steps from our hotel, so I quickly went into the hotel to do a quick checked in and was out walking directly to view point 2. It was past 7 pm and the sun had just set. The sky had turned a beautifully blue and we had to capture the beautiful scene before the sky turned dark. The scene before us was breathtaking.

The cost of our room which included dinner and breakfast was ¥18000 for two of us. It was pretty expensive for a room with no ensuite toilet or bathroom. But considering its premier location we had no other better choice. 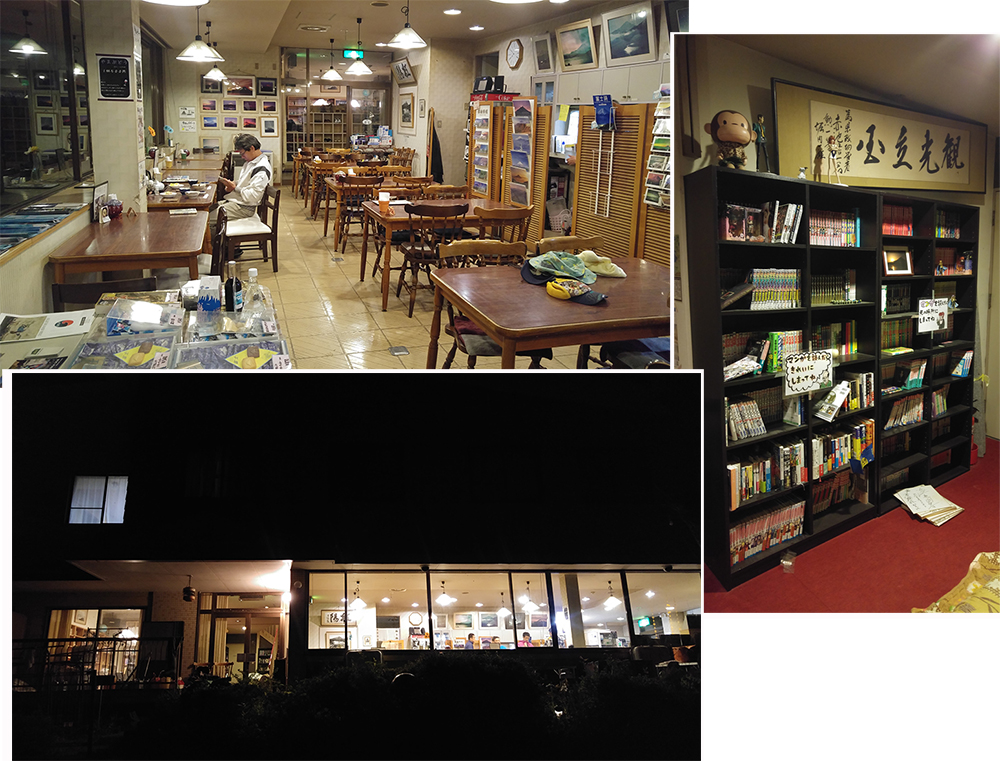 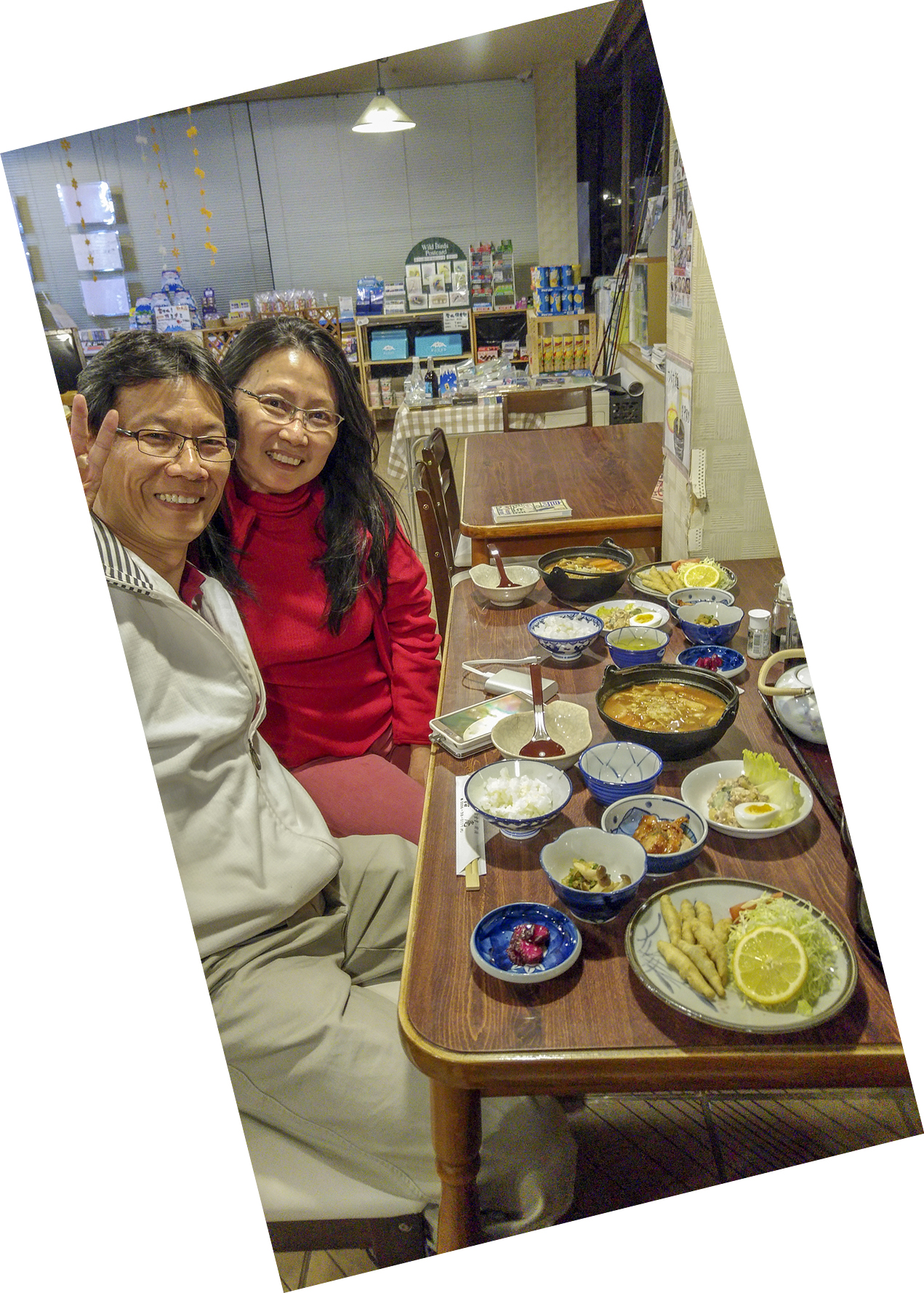 Our hotel was 浩庵(Motosu  Central Lodge Koan) situated just beside the best viewpoint of Lake Motosu. I had chosen to stay at this lake because its water was the calmest, deepest and most transparent of the five lakes of Mt Fuji. We had seen stunning photos of Lake Motosu-Mt Fuji and we wanted to be here, at this lake in the evening and early in the morning. So staying at 浩庵 was inevitable.

Around the immediate vicinity of the hotel there was no shops or restaurants so it was a good thing that our room package covered meals.

Dinner turned out to be very delicious. I especially enjoyed the the hearty stew, it was called hoto a famous soup in the region.

Our room was a very simple and basic, a typical Japanese style room for two. The room itself was clean but elsewhere like the corridors, the stairs, the windows etc there were plenty of cobwebs. This place needed a spring cleaning. 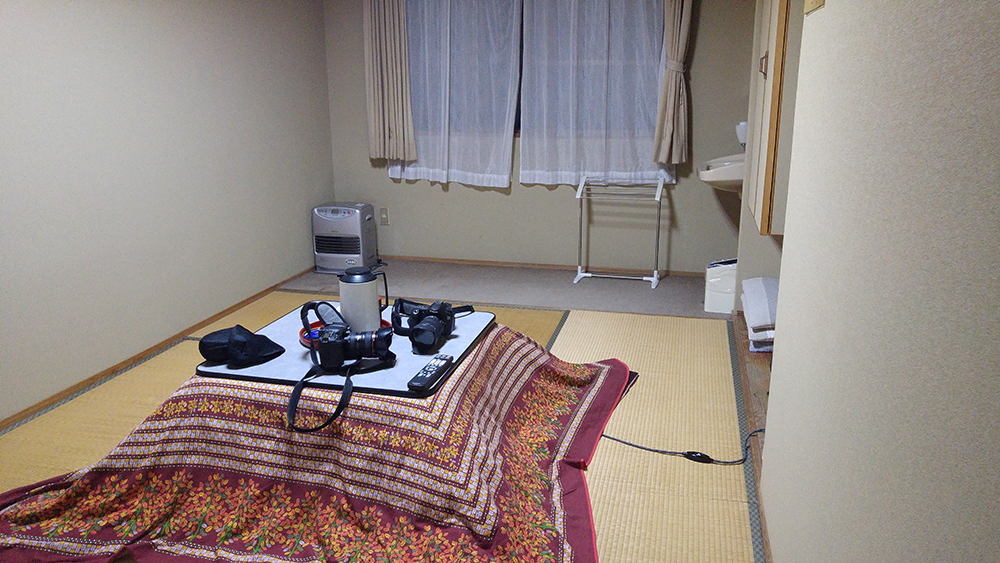