Our plan was to see sun rise over Mt Fuji and Lake Motosu.  For the later part of the morning we would drive south to Fuji Shibuzakura garden (yes the same place we passed the day before). By mid or late afternoon we would drive northeast to Omachi where we would stay for the night. If time permit we might stop at Matsumoto. 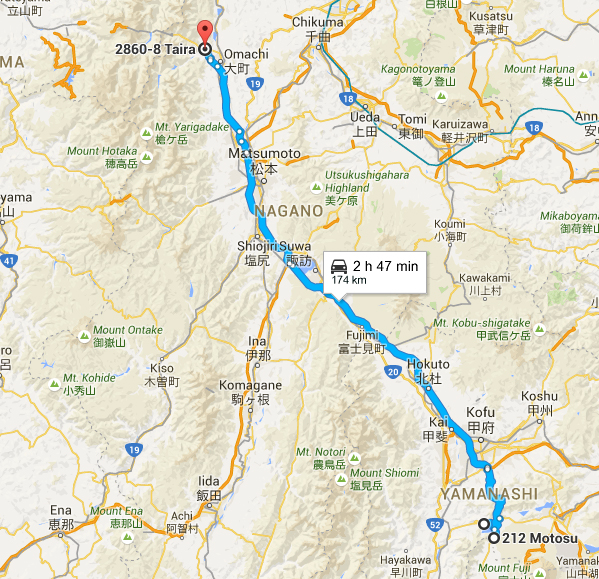 We arrived at Lake Motosu view point just 10 minutes before sun rise which realised that our timing was a bit late, nevertheless the view was still awesome. Fuji Shibuzakura garden was absolutely lovely and our visit was definitely at the right time of the season. The view of Castle Matsumoto was as stunning as it was two years ago when we visited it.

We woke up at 4.20 am in the morning as we wanted to be at view-point-2 before sunrise at 4.50 am. But surprising at 4.20 am the sky had already brightened up, it was light blue in color. We got out of the hotel and quickly walked to view-point-2. We saw a couple of cars parked near view-point-2 and there were people sleeping in the car!

We were at view point 2 at 4.30 am and there were already a few photographers stationed there with their huge cameras on tripods pointing at Mt Fuji. 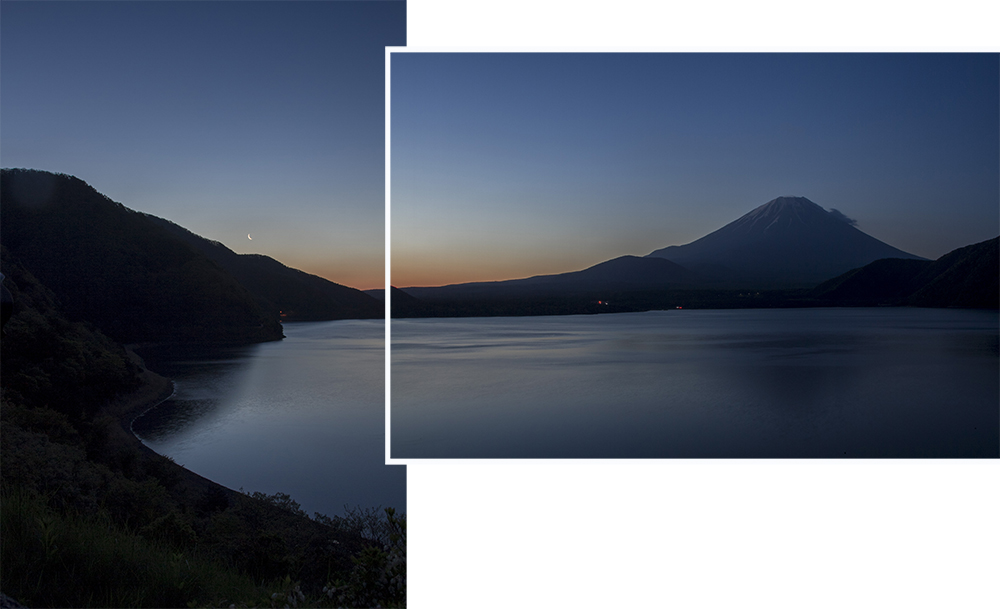 The morning air was very cold, I had to put on my gloves to keep my hand warm. We waited patiently for the sun to rise. While waiting we kept hearing this buzzing sound and later realized that some one at the lower ground nearer to the water was flying a drone, taking mid air photography. It was pretty annoying to have the drone flying into the frame of our picture shots as it looked like a big ugly housefly and spoiled our shots. 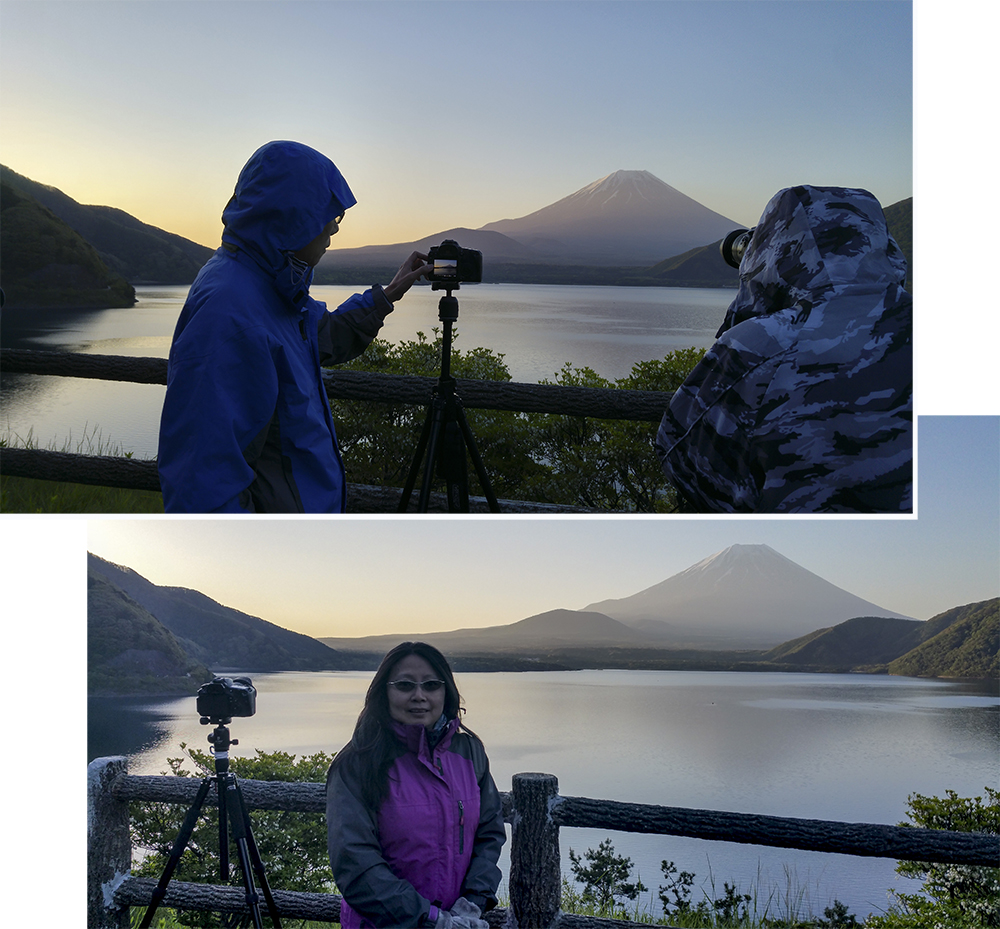 Waiting for the sun to rise

The breakfast table was set facing the huge window such that all diners would sit facing out. Breakfast came with a view of the lake and Mt Fuji. The location of this hotel was just perfect so it was not surprising that the management was taking full advantage of the surrounding scenery. 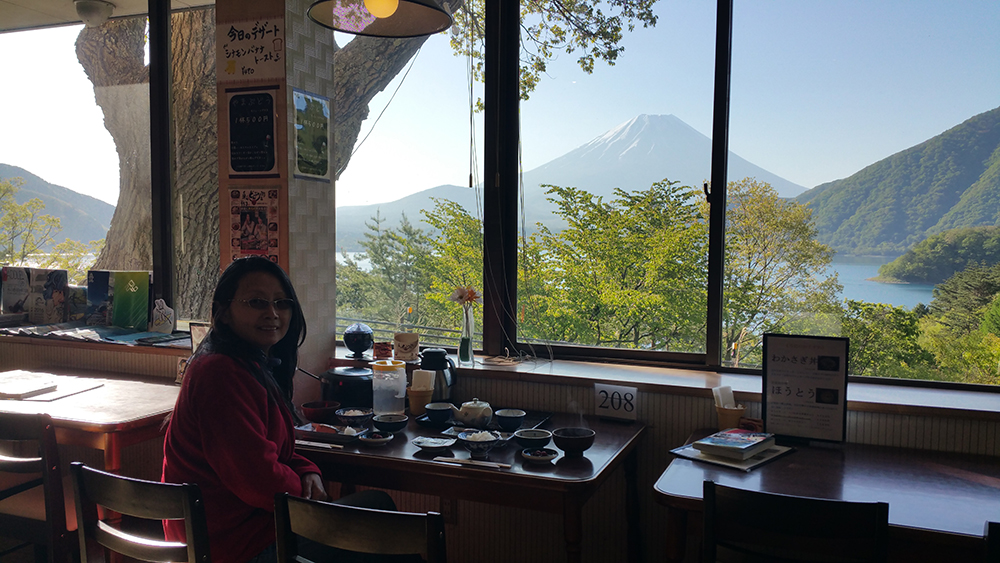 Breakfast with a stunning view

The beautiful view in front of us did entice us to drag out our breakfast, even after all the food was gone we still sat there sipping cups and cups of green tea staring at Mt Fuji. Reluctantly we still had to get up and leave for our next destination.

Hotel 浩庵 and a view from our room

The festival was held at Fuji Shibuzakura garden just 10 km south of Lake Motosu. Just when we were near the garden the only road that led to the garden was congested with vehicles. It was only 8.30 am in the morning and the garden opened 30 minutes ago and yet its whole vicinity was packed with human and traffic. We parked our car (parking fee ¥500) and walked to the entrance to buy our admission tickets at ¥600 per person. 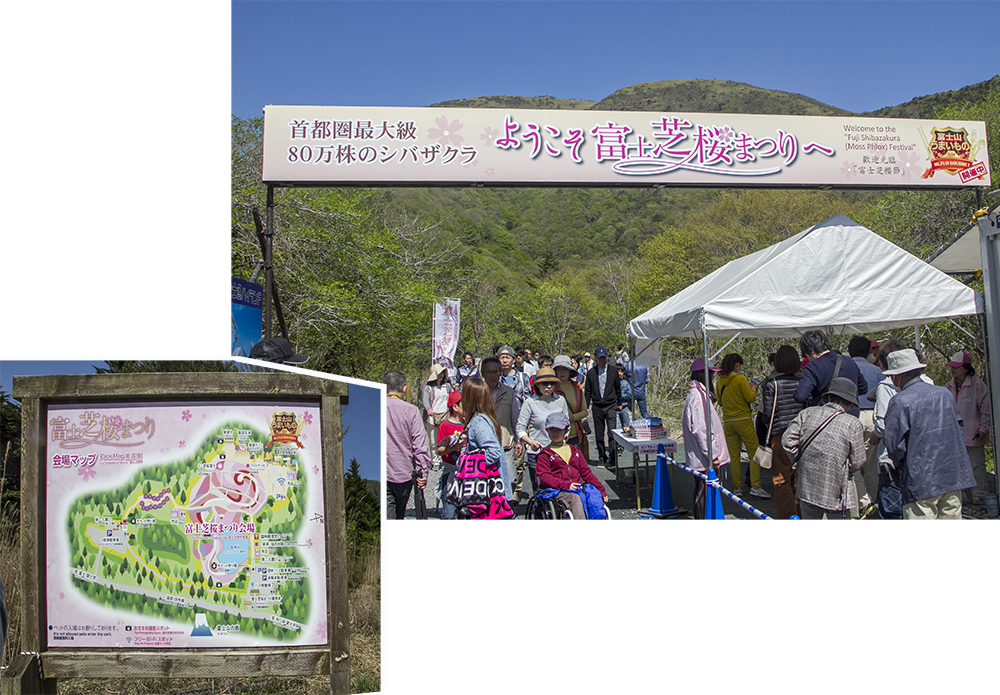 The garden was very beautiful with its massive flower fields and ponds. The flowers were phlox moss and they came in different colors like pink, white, and purple. 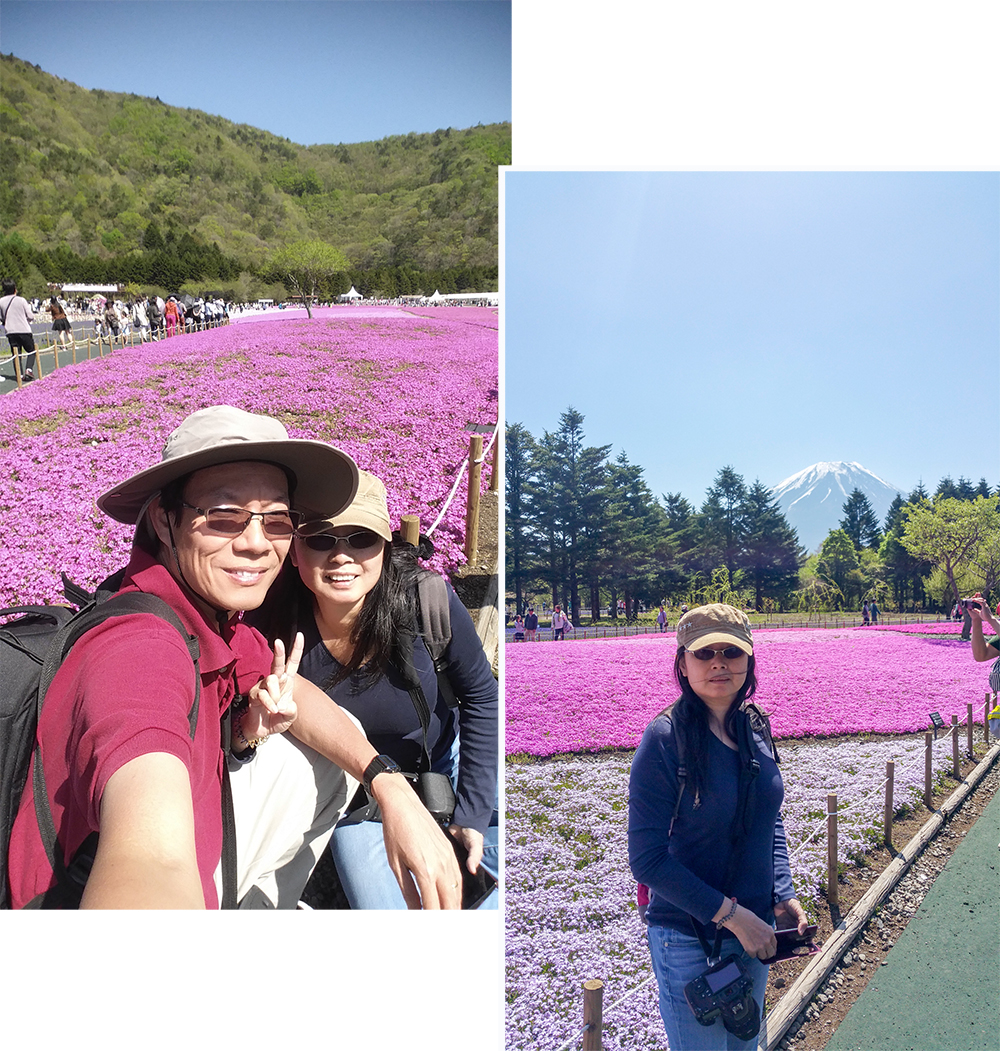 This garden had more than 800,000 shibazakura (moss phlox) blooming in an extensive site at the base of Mt Fuji. The phlox moss blossoms were around 1.5 cm in diameter and resembled cherry blossoms. Since it was a creeper plant it was also called “lawn cherry” which was shiba-zakura in Japanese. 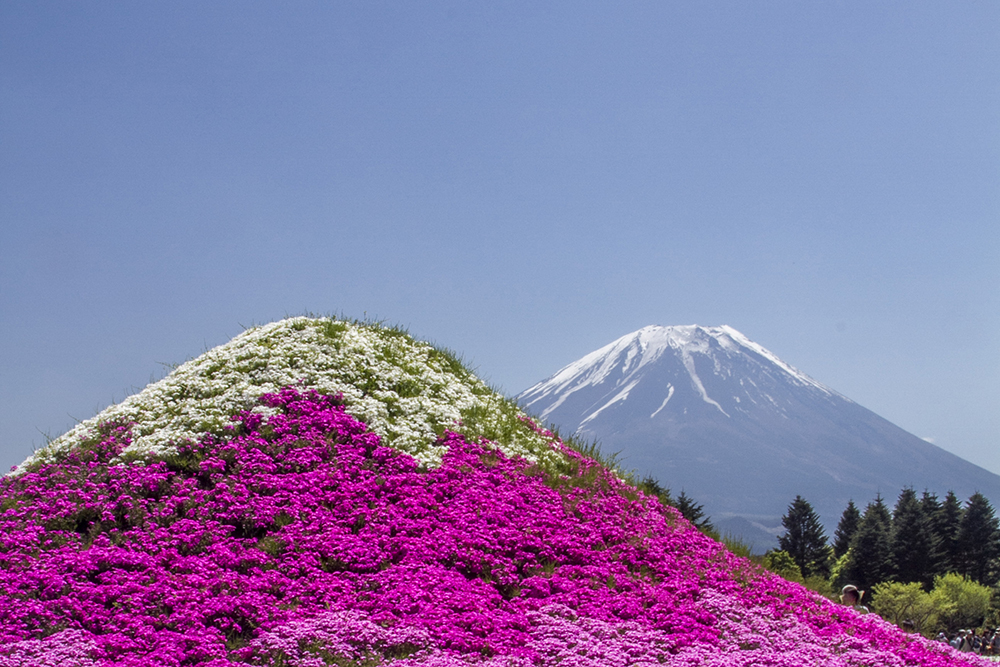 Mt Fuji and its double

There were several famous Phlox Moss (Shibuzakura) gardens in Japan but for our trip we selected to visit this particular garden because we felt that it would be the most beautiful as it had Mt Fuji as its backdrop. The blue sky and the white snow capped Mt Fuji contrasted beautifully with the massive flower fields, forming a very awesome scene. 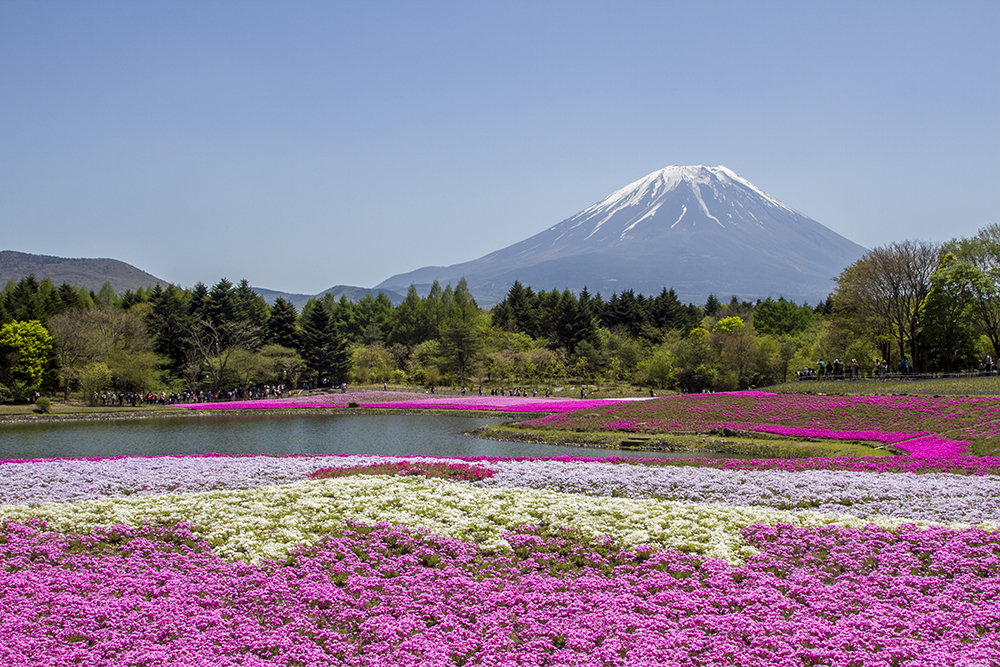 On our way to Omachi town (one of the two gateway to Mt Tateyama-Kuroble Alpine route) we would to have drive near Matsumoto City and since we had the time we made a small detour to visit Matusmoto Castle. We had visited Matsumoto Castle in the autumn of 2013 and loved the scenery so we were back again for a second visit.

It seemed that Matsumoto Castle looked great regardless of season. Even though there were no cherry blossoms or autumn leaves the castle and its moat looked beautiful against the blue sky. 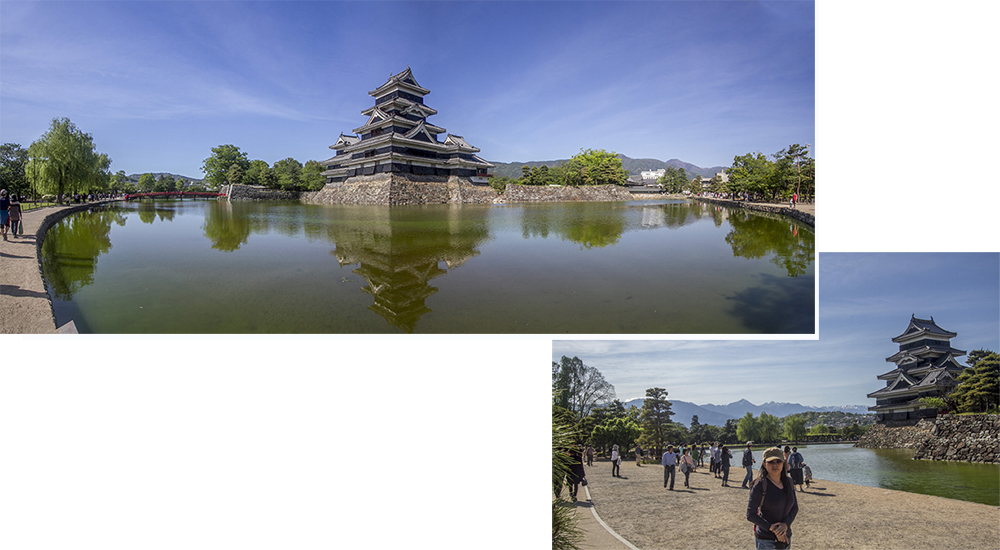 Matsumoto Castle was considered as one of the most complete and beautiful Japan’s original castles. Unlike Himeji Castle that was mostly white in appearance, Matsumoto castle was black. It gave an air of coolness, aloofness and power.

We arrived at Omachi  at about 5 pm and drove directly to our hotel, Hotel New Kawachiya. It was a rather pleasant hotel facing a river. 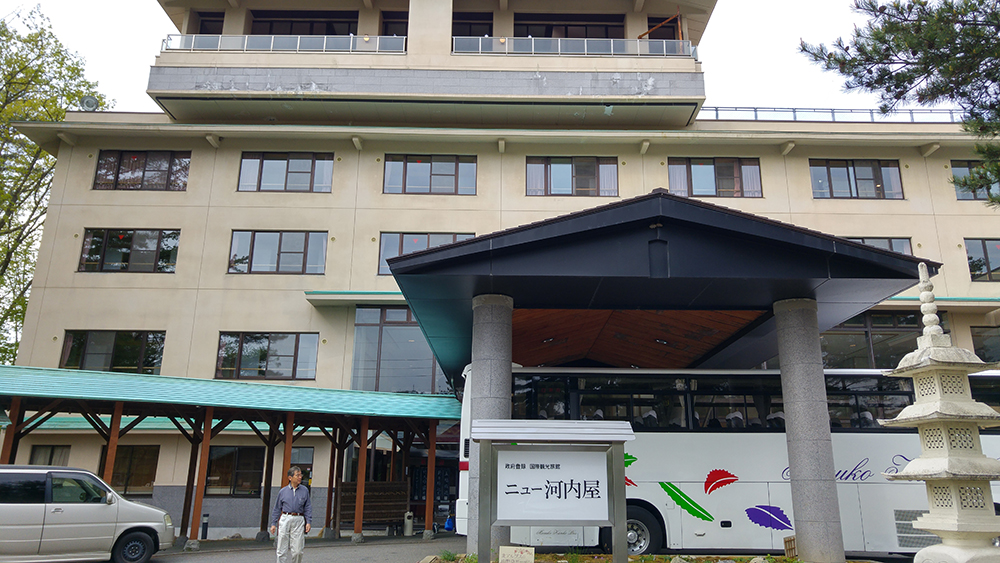 Our room came with ensuite bathroom/toilet and included dinner and breakfast for two. The total cost of our stay ¥17580 which was rather expensive but still cheaper than the other hotels in the vicinity. Our room was on the higher floor, it was large and comfortable. It had separate bathroom and toilet. 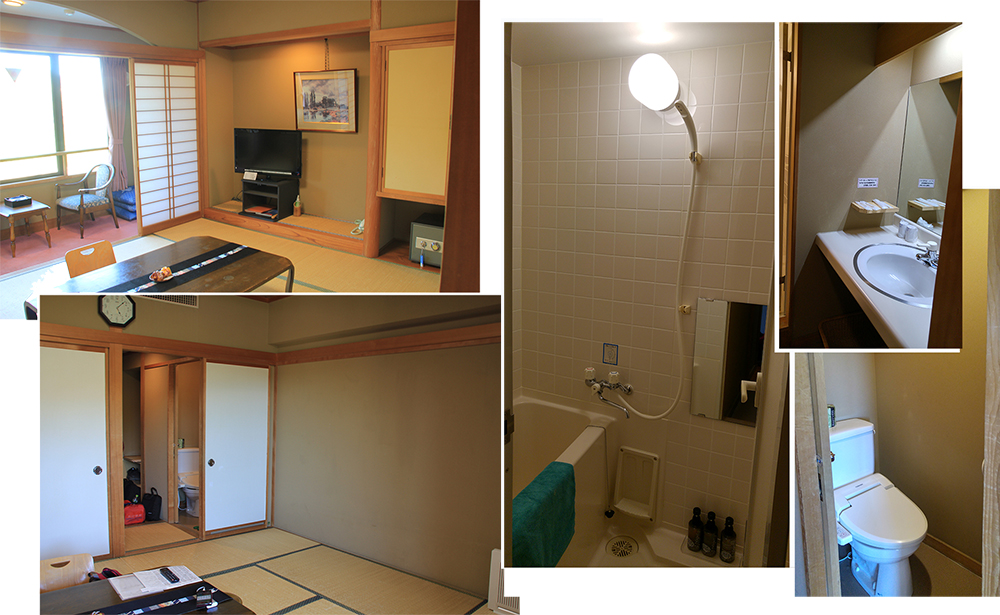 We were in the dining room by 7 pm for our dinner. Dinner was very delicious and we had a great meal. 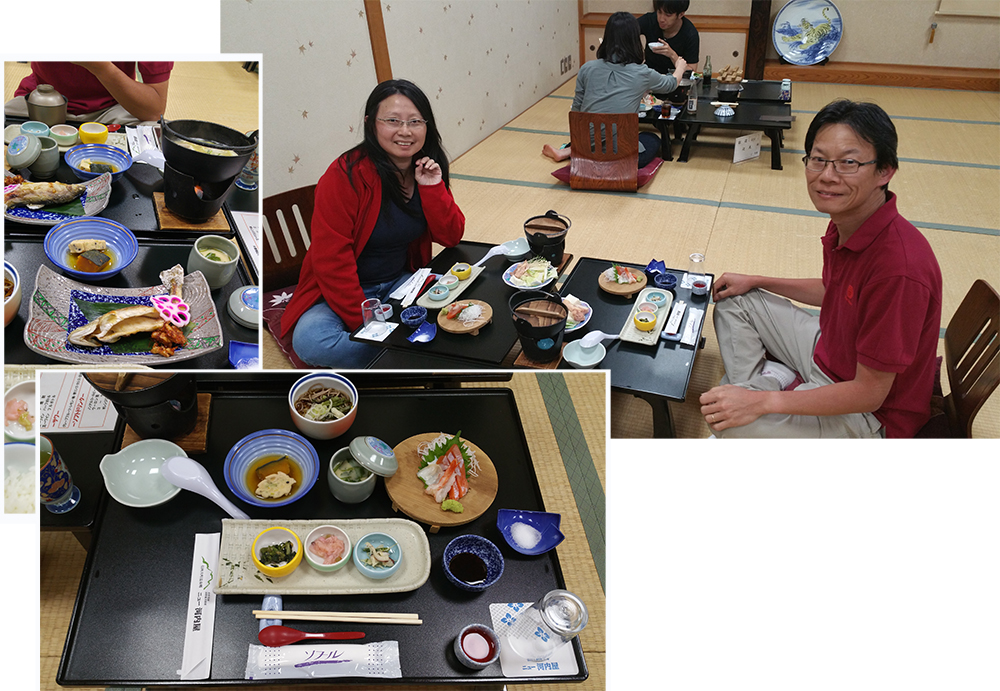