In the morning we would be visiting Kayabuki no Sato (thatched roof village), in the afternoon we would drive to Amanohashidate and visit one of Japanese top three sights. For the night we would be staying at Miyazu city near to the northern end of Amanhashidate.

The Kayabuki no Sato was as picturesque as the photos I had seen. A loving and charming village that brought us back in time. Amanohashidate certainly deserved to be named as one of the top three sights in Japan.

From our hotel we drove to Miyama (美山), a remote rural area in the mountains 30 km  north of central Kyoto. This area was famous of its traditional thatched roof farmhouses. Our destination was a thatched roof village, Kayabuki no Sato.

The journey was 93 km and took about one and a half hour. Near the village there was a row of shops and restaurants and car park lots. We parked our car (no charges) and crossed the road to the village. 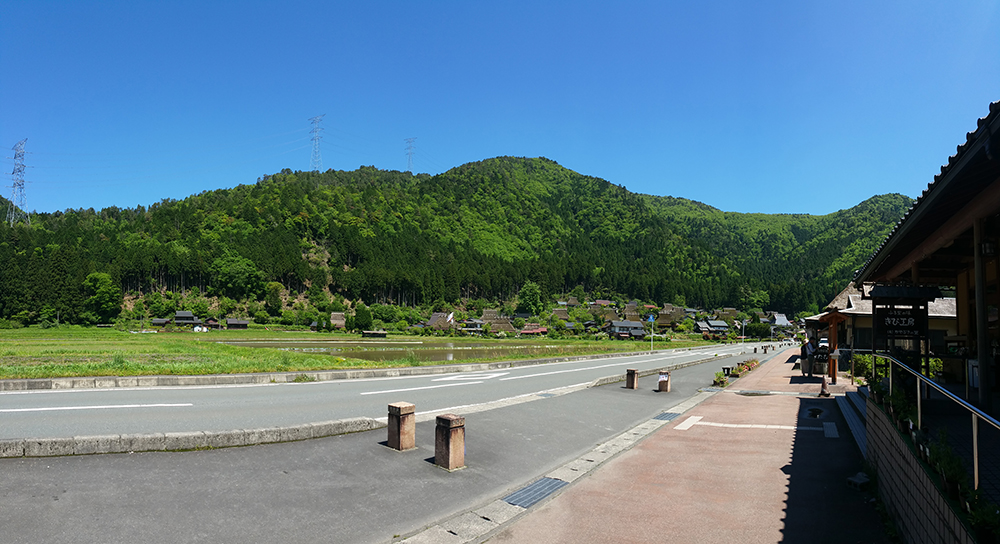 Along our drive to the village we saw several thatched roof houses, most the time it was just one or two isolated houses amount more modern structures. It was only at this village (Kayabuki no Sato) that we saw the highest concentration of thatched roof houses. 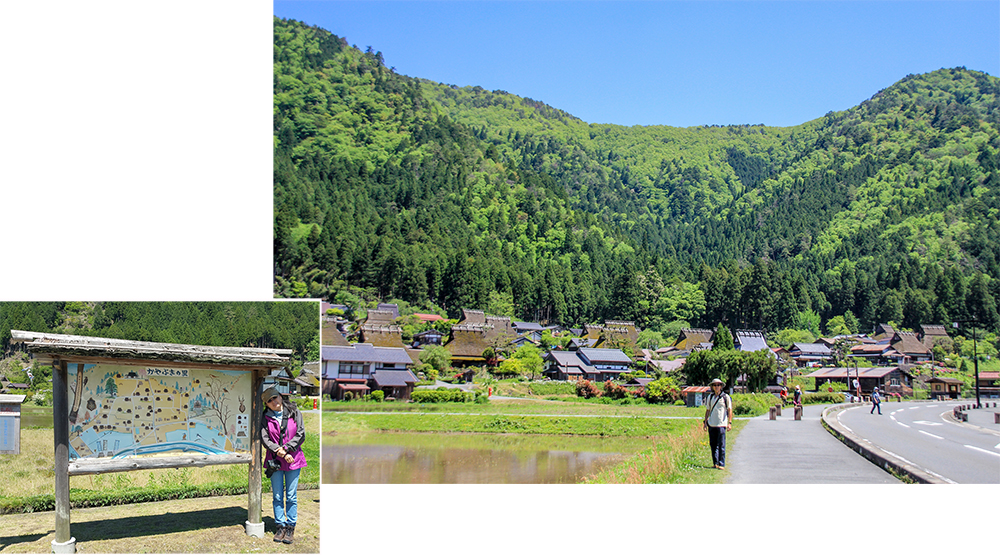 There were not many visitors so the whole place was  very peaceful and pleasant. We were able to wander slowly through the village lanes moving from one house to another, peeking into the houses enjoying the nostalgic feeling that this quaint traditional village invoked. 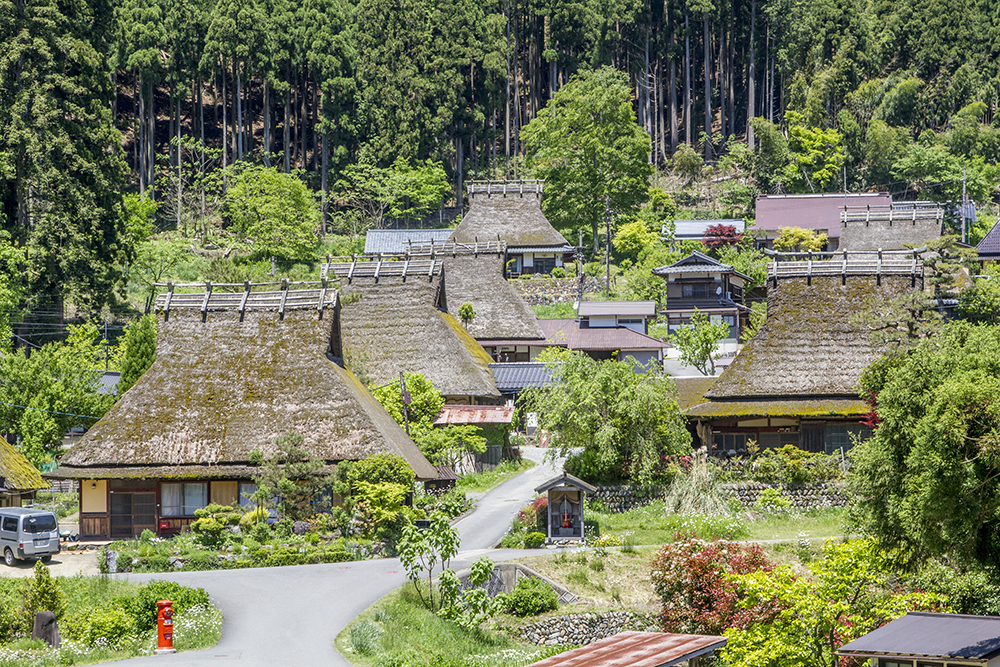 Road leading to the village

This was living village, there were about 40 thatched roof houses and each one had occupants living in it. Some of these traditional dwellings were more than 150 years old. I liked this village very much, though it was old it was beautifully maintained, I felt like I had traveled back a century. 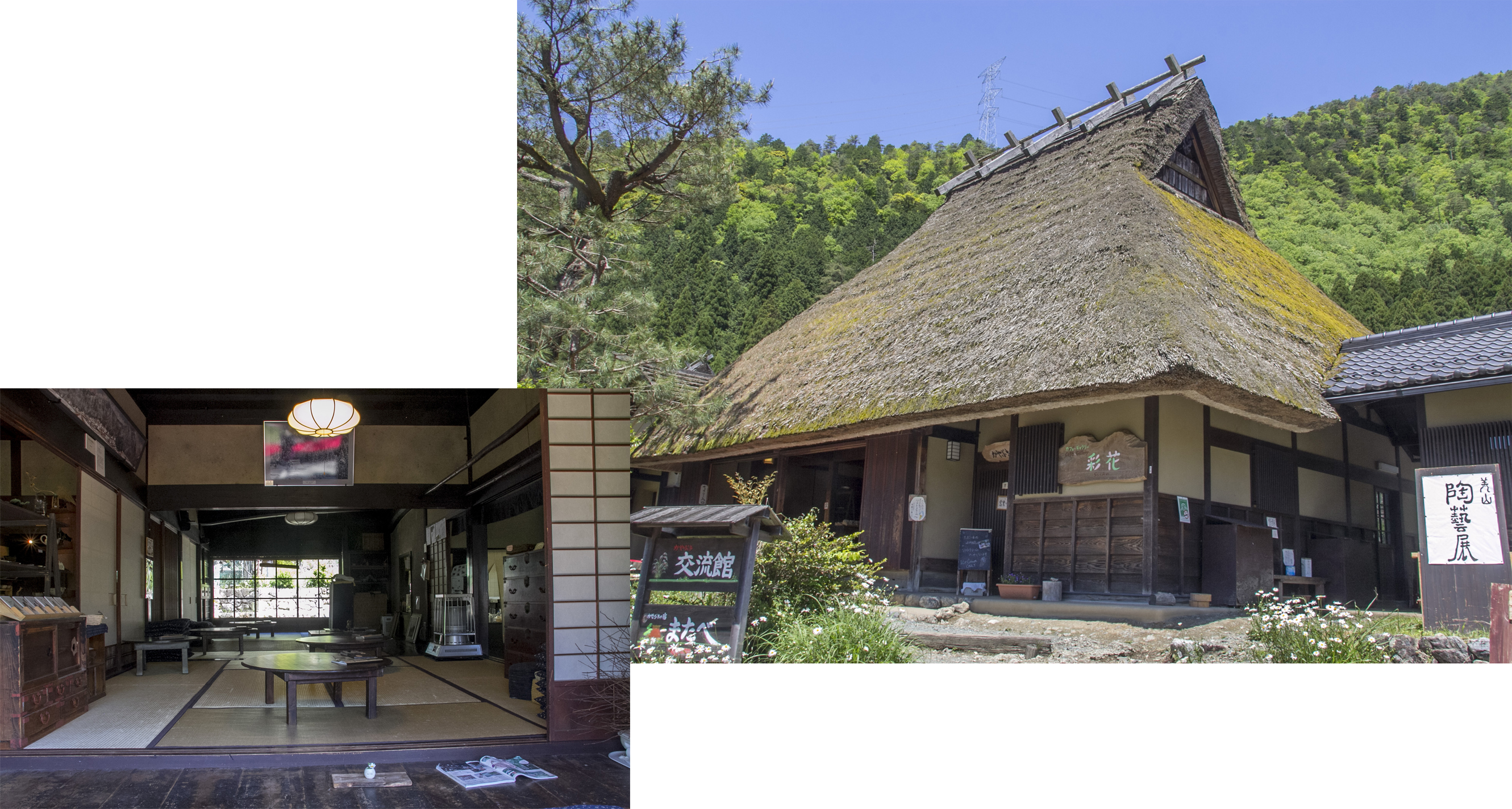 Pottery place in the village

I came to a sign board that gave more details about the thatched roof houses. The distinct thatched roof houses found in this area were known as the the Kitayama – North Mountain style. In the ancient time each roof was replaced every 40-50 years, the thatched roof lasted that long because the smoke rising from the indoor cooking hearth preserved it. But since the adoption of gas cooking stoves (no smoke) the roof must be re-thatched every 20-25 years.

Replacing the roof was a communal project.  Each November, thatch was collected  and checked for quality, bundled, stacked and set in the field to dry. A single roof required more thatch than can be harvested from the fields of three villages. To preserve this traditional architecture more grassland were needed for harvesting thatch. 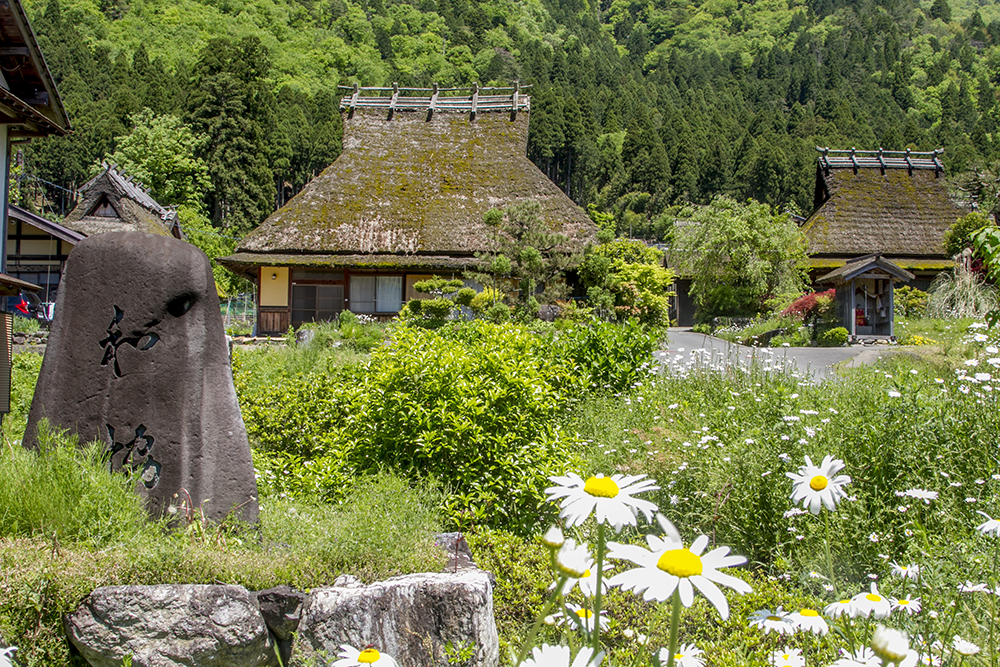 On our way to Amanohashidate

From the thatched roof village we drove about 76 km for about 1 hour 30 minutes to Amanohashidate. This was a pine covered sandbar that spanned the mouth Miyazu Bay, it was considered one of Japan’s three most scenic views. 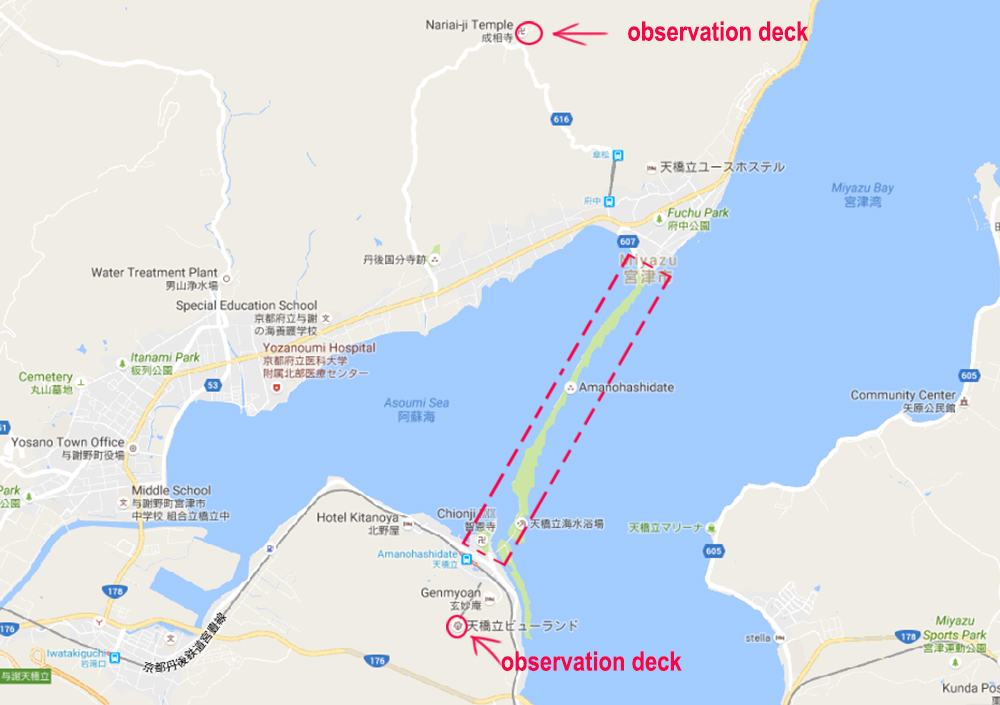 When we arrived at the southern side, we parked our car in a carpark next to Chionji temple (智恩寺 ) which was just beside the sand bank. After collecting ¥600 from us as parking charge, the attendant gave us some slips of papers. Based on my limited Japanese knowledge I kind of figured out that these papers were discount vouchers. We left the car park and took a short cut by walking through Chionji temple. 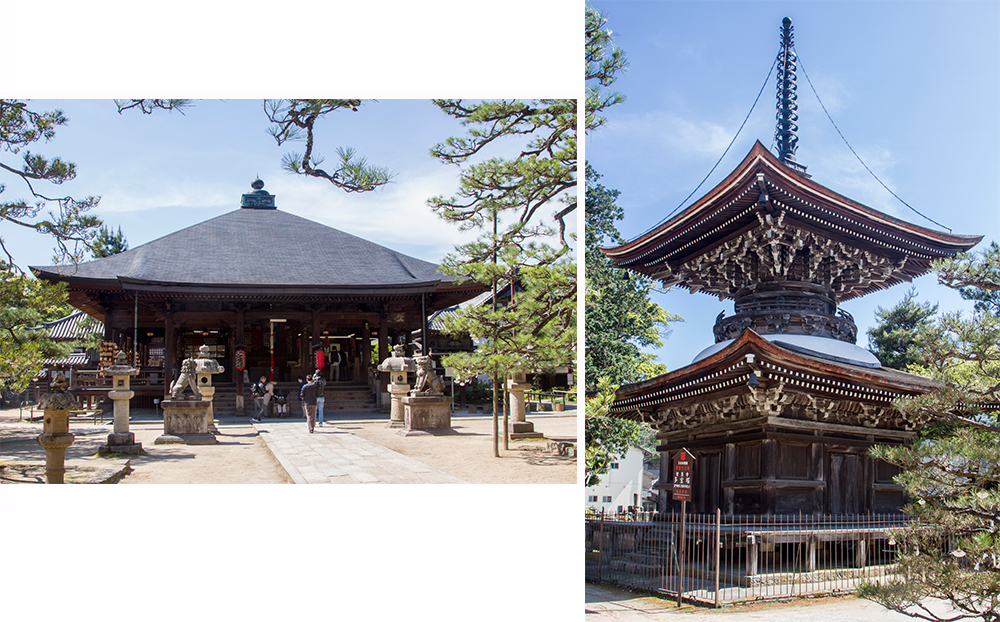 We walked by the main hall and a two-storied pagoda. The pagoda was about 600 years old, it was classified as an important cultural property and was the oldest of its kind in Japan. 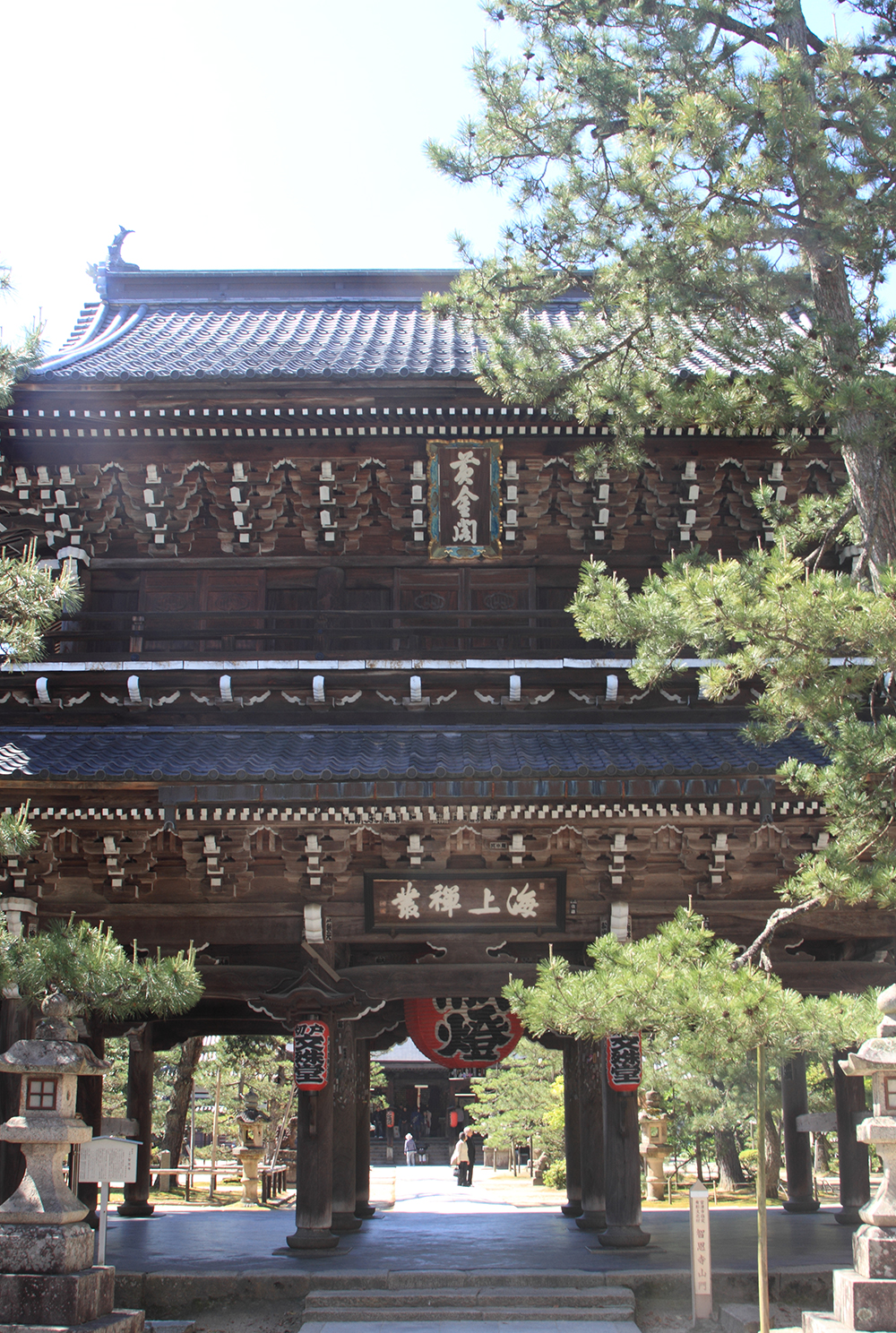 After exiting Chion-ji Temple we came to a paved road that had restaurants and cafes on both sides. It was about 2.30 pm, we were hungry and the cafes looked so cosy and inviting that we decided to stop at Cafe du Pin for lunch. 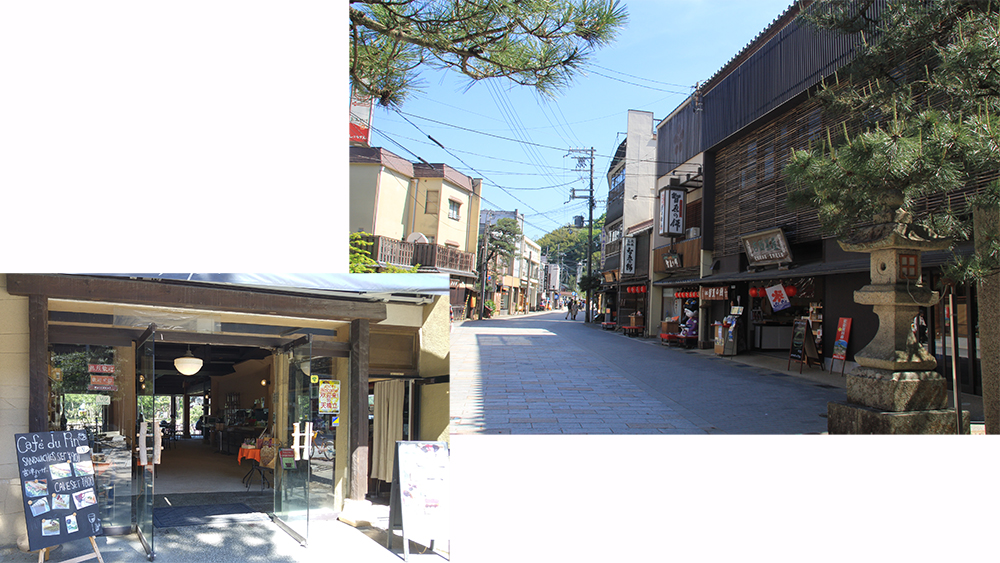 Freshly made sandwiches with roast chicken meat and lots of veggie, cheese cakes and two cups of aromatic cafe latte! Yummy. Not only was the food delicious, lunch came with a special view. 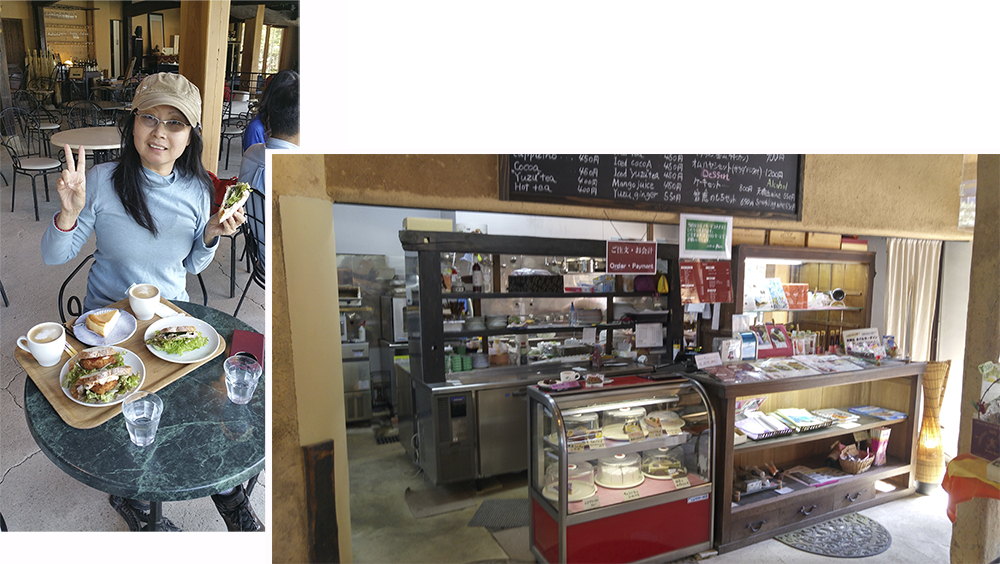 One end of the Cafe du Pin was paneled  with ceiling to floor windows facing the bay. Many chairs and tables were positioned by these windows to give customer a great view. From our table we could see a red bridge connecting the mainland to the sand bar (Amanohashidate) and on the right side we saw the waterway of the bay with sightseeing boats parked at its bank. 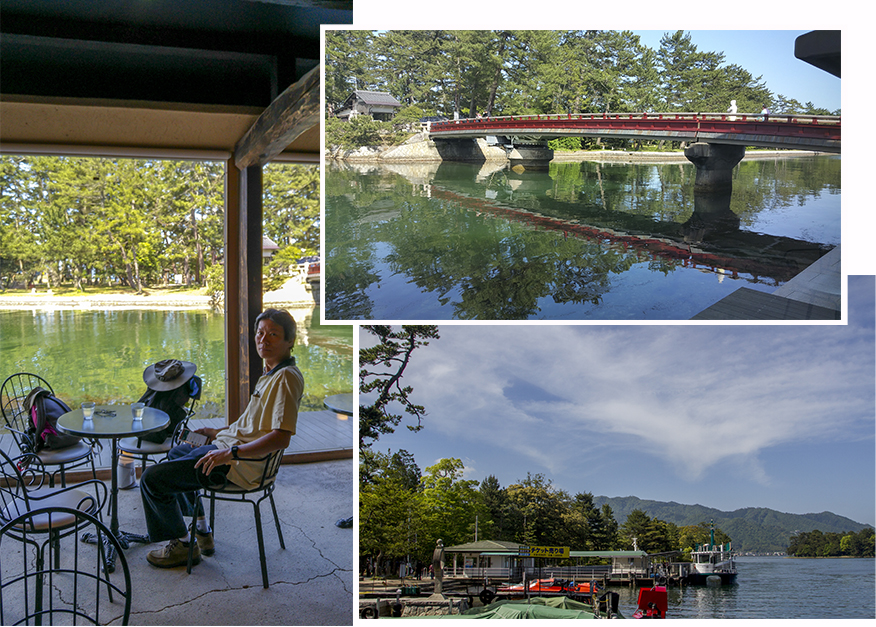 Lunch with a great view

In between sipping our cafe lattes, I realised that some of the ceiling-to-floor windows were actually doors. So we wandered out of the glass door onto a deck along the windows. We were surprised when we looked into the water. There were hundred of jelly fishes, some red and some white drifting in the water practically within touching distance of my hands. This was the first time I saw jelly fishes outside an aquarium.

Jelly fishes in the Bay of Miyazu Bay

The observation deck (Amanohashidate View Land) on the southern side of Amanohashidate was located in the compound of an amusement park up the hill. From our lunch place we walked about 250 metres to the ticketing counter of the amusement park which was at the base of the hill. The admission ticket to the amusement park was ¥850 per person. I remembered the discount vouchers that were given to me earlier by the car park attendant but could not find them. I told the ticketing staff about my lost vouchers and she was so kind to still gave us the discount. So we paid ¥50 less per ticket.

The admission tickets included a return ride up the hill. There were two options either a monorail or a chairlift. We opted for the chairlift.

This amusement park was a “mundane” park, not those that had exciting and gravity defying rides. It had rides like ferry wheel and midair bicycles which were more suited for young kids. The admission tickets did not cover these rides. 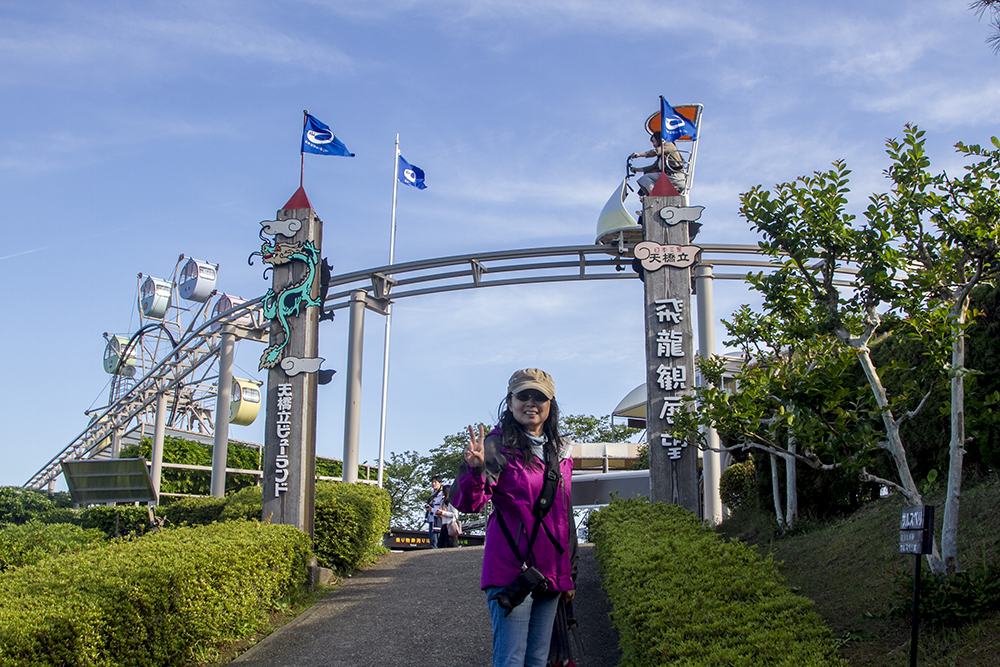 At the park there were several visitors and most like us were up there for the observation deck. I wondered why did the town build an amusement park at this strategic place and forced everybody to buy admission tickets to the amusement park just to get to the observation deck. They could have just built the chairlift and the monorail and charged cheaper for the rides. 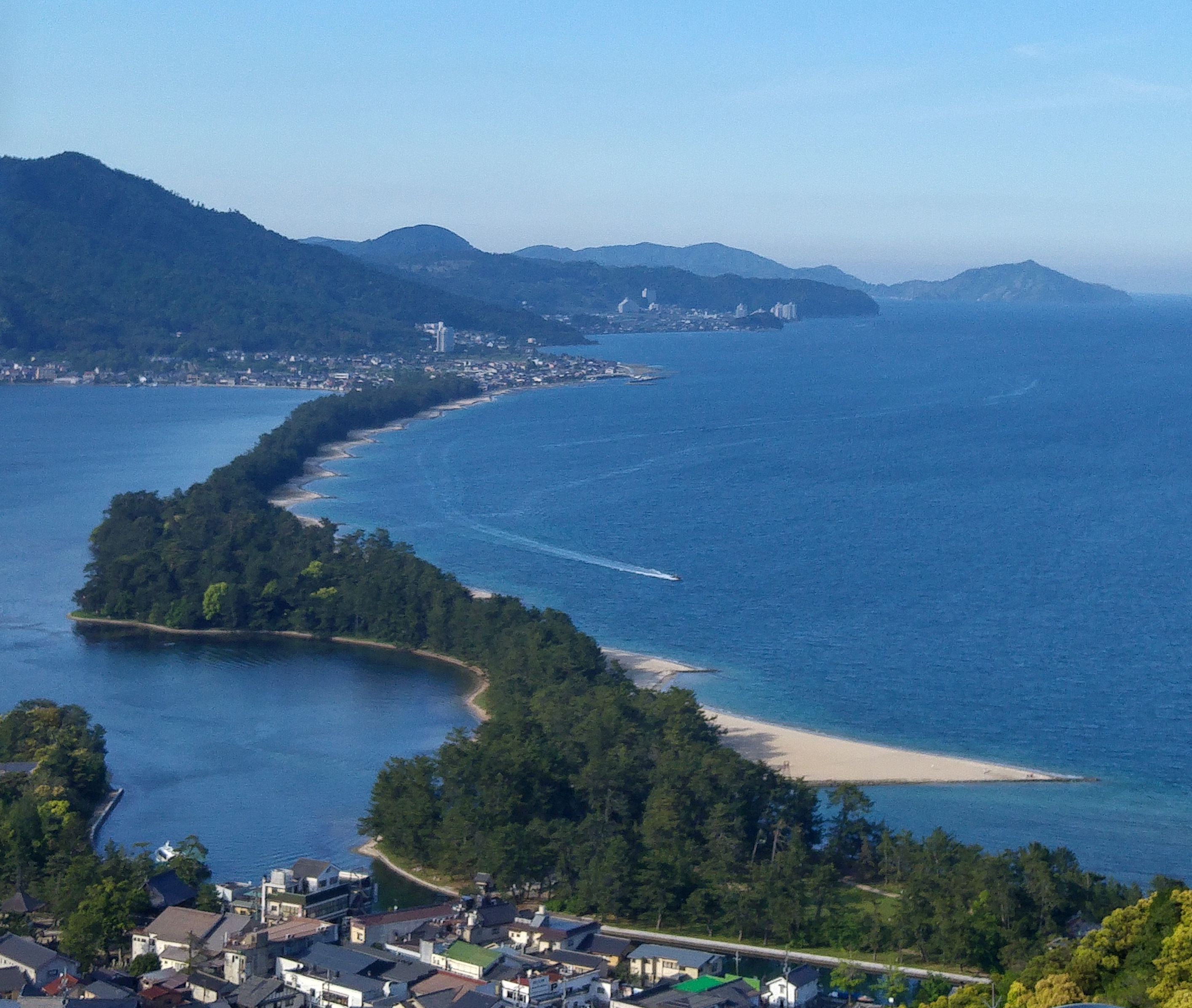 Amanohashidate (view from the southern side)

Apparently there was a recommended way of viewing Amanohashidate. That would be to stand on top of a low concrete bench that was placed at a strategic spot. With the back facing Amanohashidate bend forward and looked at it through spread legs. We both tried the “recommended” technique but did not feel that the view was any different from viewing it standing upright. 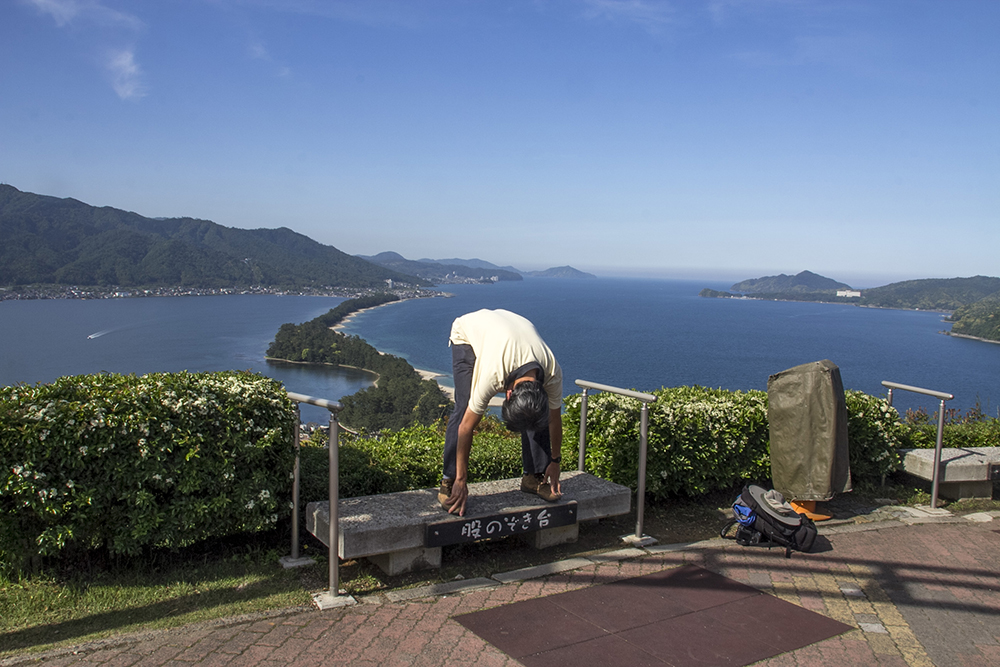 The recommended way of view Amanohashidate

When viewed from the southern side, Amanohashidate was described as looking like a dragon flying up to heaven. It did looked some sort like a Chinese dragon, with spikes on its back. The weather was good, the sky was clear and Amanohashidate looked magnificent spanning across Miyazu Bay. It was a pity we could not stay here till sun down as I would love to view Amanohashidate under the ray of the setting sun. The amusement park closed at 5.30 pm and there was no way to go down the hill other than taking the monorail and chairlift operated by the park.

We left Amanohashidate southern side at about 5 pm and drove around the bay to the northern side. On the northern side there were several view points on the hill. The lower viewing deck (Kasamatsu park) could be reached by taking a monorail or chairlift which again closed between 4.00 pm to 5.00 pm depending on the seasons.

We drove uphill to the Narai-ji Temple, just before the temple there was a small wooden ticketing-guard house. At 5.10 pm it was already closed and there was no staff in the house. We parked our car before the guard house and walked toward it. Just when we were near the house, a voice came over a loudspeaker speaking in Japanese. I had no idea what it meant so we could only assume that we were told not to proceed further.

The guard house was at the intersection of several roads and two paths. One of the paths was steps going uphill and there was a signboard indicating an observation deck above. After about 10 minutes walk uphill we reached a tall two levels observation deck. At the higher level we had a clear view of Amanohashidate. 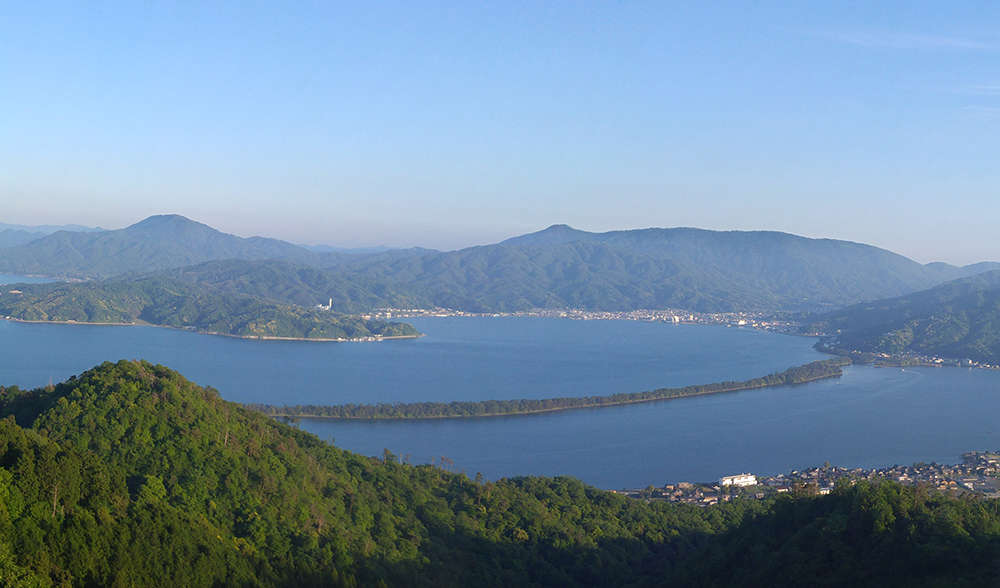 Amanohashidate view from the northern side

Amanohashidate did not looked as beautiful from the north side as compared to the view from the south side. At this side the sand bank looked like the kanji for “one” (一).

I came up to the deck expecting just to see only Amanohashidate but got more than I bargained for. As the sun began to set, the mountain ranges in the distance began to change their colors. Somehow the evening rays brought out the different layers of mountain ranges. A very stunning ethereal sight.

At about 6 pm we left the deck and walked down to the guard-ticket house again. Again when I walked near it, a voice speaking Japanese was broadcasted over the loudspeaker. For a while I thought that if we were to proceed beyond the guard house, we would soon encounter a Japanese man running down the road to stop us. Soon we realised that it was just a motion triggered taped message so we ignored the “voice” and walked down another path to see the 5 storied Pagoda of Narai-ji temple. 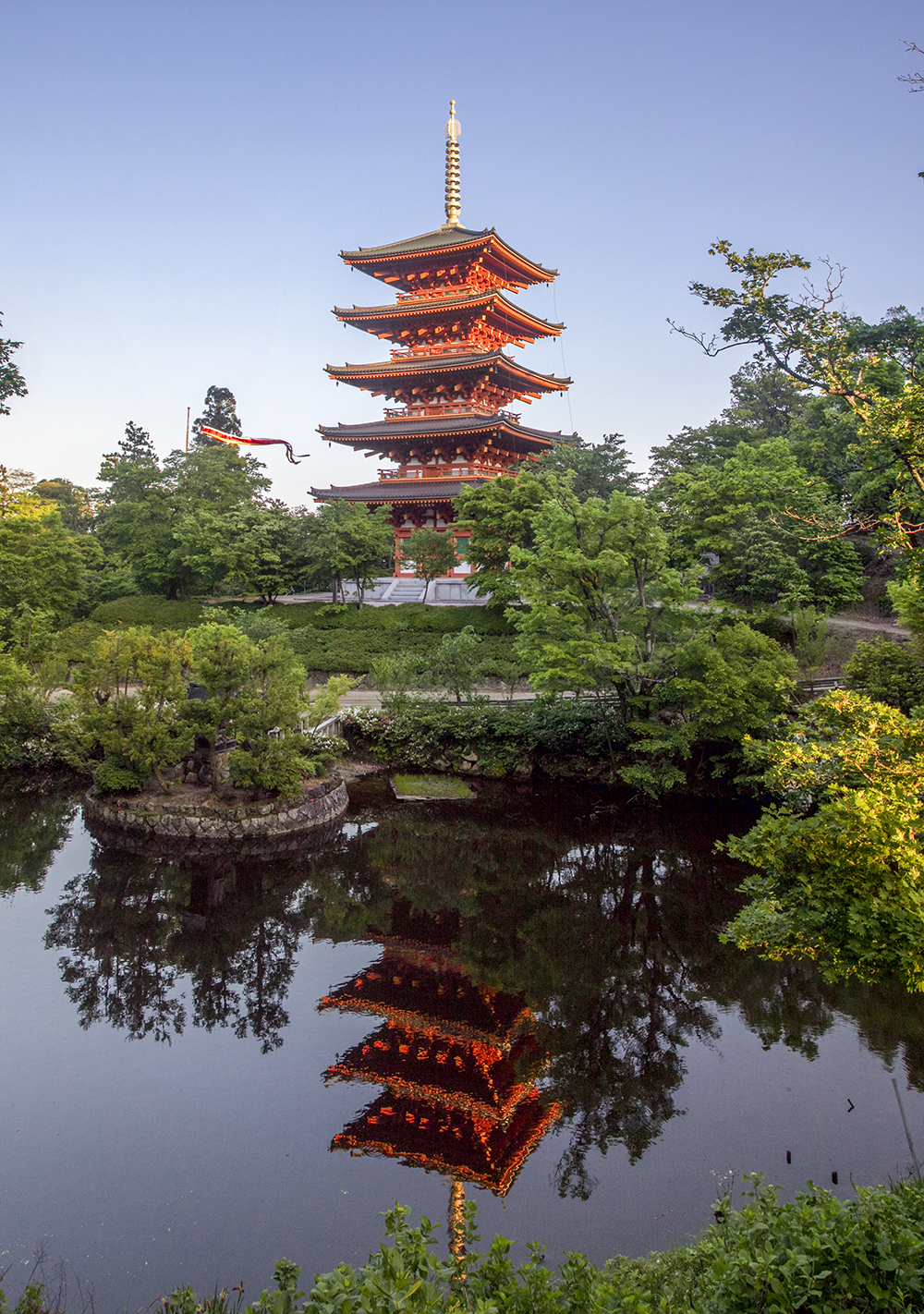 By about 6.30 pm we started walking back to our car, we wanted to drive off the mountain before day light disappeared. On the way up to Narai-ji temple, the road was pretty steep at some stretches which would make going down dangerous in the dark as there were no road side lamps at all. It would be safer to leave when the place was still bright. I would love to stay till the sun gone down and the sky turned dusky blue but that was not the case. We  took a few last shots of the beautiful mountain ranges before driving to our hotel for the night.

Sunset as view near Nachi-ji Temple

Tonight was the first night we were staying at a Youth Hostel for this trip. It was the Amanohashidate Youth Hostel on the northern side of Amanohashidate. We had booked a room for two and the cost came up to ¥8100. The room did not have ensuite toilet/bathroom and for that price no meals were included.

We had to resort to staying at a Youth Hostel because the other accommodations around Amanohashidate were just two expensive, the rates were easily three or four times that of the Youth Hostel. 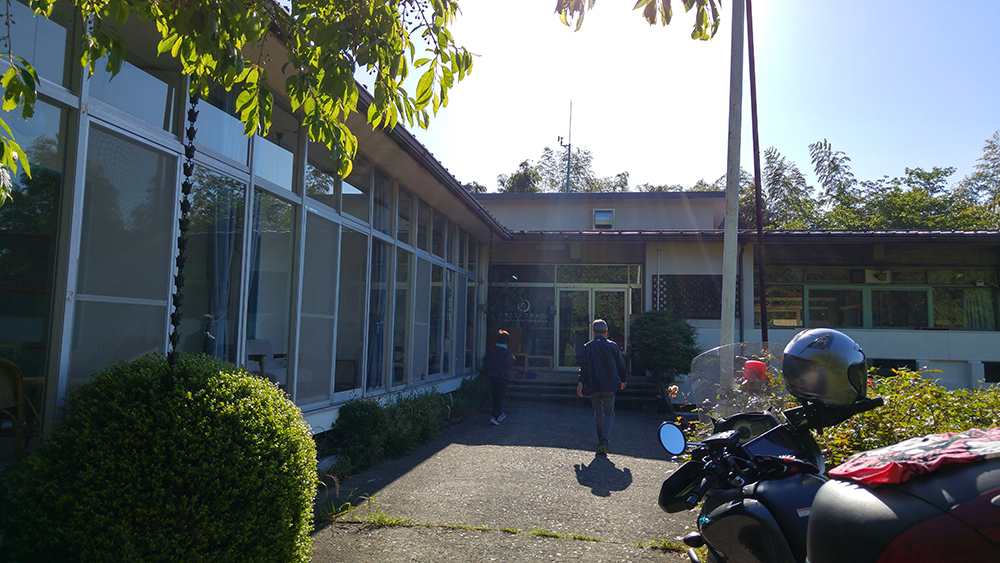 It was a very short drive from Narai-ji Temple to the hostel (only 5 km). After checking in we were given clean sleeping sheets and pillow cases and told to return them after use the next day. Coffee and tea at the Canteen/Kitchen were free and we were welcome to use the plates, cups, utensils and appliance. Toilets and shower rooms were shared facilities.

It was a simple dinner for us this evening. We cooked two cup noodles and ate them leisurely in the huge empty canteen. 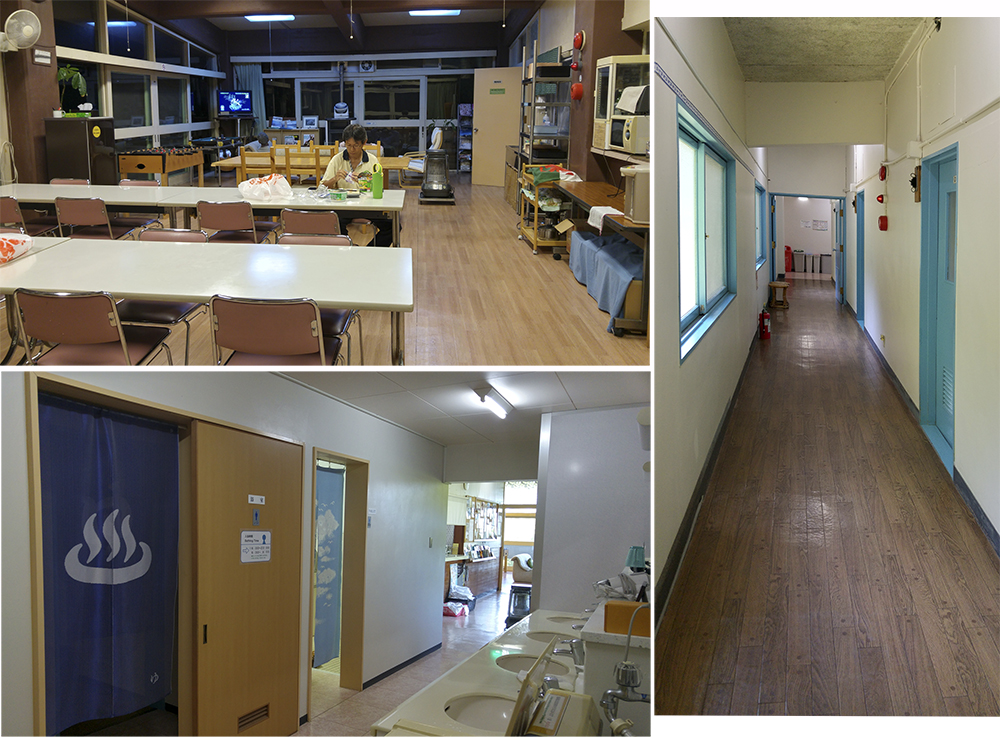 After dinner we were back to our room. Our room had four bunk beds but since we had booked a room the entire room was ours. The room was very basic, just 4 beds, one table, an aircon and a small balcony. Nothing luxurious but clean enough to be comfortable.

Our Room at Amanohashidate Youth Hostel