In the morning we would drive up to Tottori, in Tottori we had two sightseeing destinations the Uradome Coast and the sand dunes. Sometimes in the late afternoon we would move forward to Lake Shinji (at Matsue) for its beautiful sunset.

Uradome coast was very lovely, this “relatively tourist unknown” place was definitely lovelier than my expectation. Tottori sand dune was gigantic and Lake Shinji sunset was gorgeous beyond words.

We drove for about two hours westward covering about 107 km before we were near to Uradome Coast. It was hard to miss Uradome Coast as along the road there were already road signs pointing to Uradome Coast ahead. We were not too sure what to expect. Some pictures that I had seen showed white beach, blue sky, turquoise sea and interesting rock formations while others showed downcast sky and greyish dull blue sea. I just hoped that we had come at the right time of the year.

The Uradome Coast stretched for 15 km from Cape Kugami in the east  to Shichi-yama (Shichi-san) in the west. We had chosen to explore only a short section of the coast on the western side. I had located six positions on the road where we could access walking paths that led down to the coast.

Western Section of the Uradome Coast

At location “1” we saw steep steps leading down the coast. Unfortunately along the road near the steps there was no suitable place to safely park the car. We drove on forward, at location “2” we saw a viewing deck and a set-in to park our car. A few steps down the road was a sign board show a map of the coast and near it was the start of a boardwalk leading down to the coast. 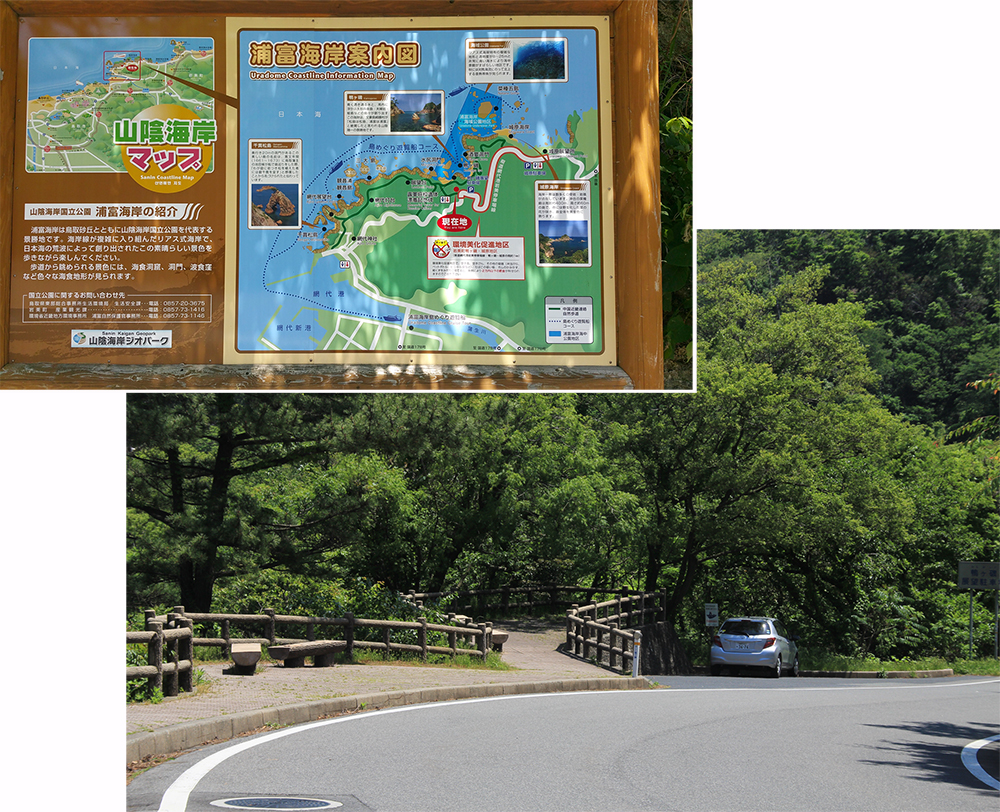 There was not a single soul beside us and we got the whole beautiful place to ourselves. The path down the coast was a combination of paved walk, stone steps, wooden board and natural ground. It was not difficult to navigate our way down to the beach. 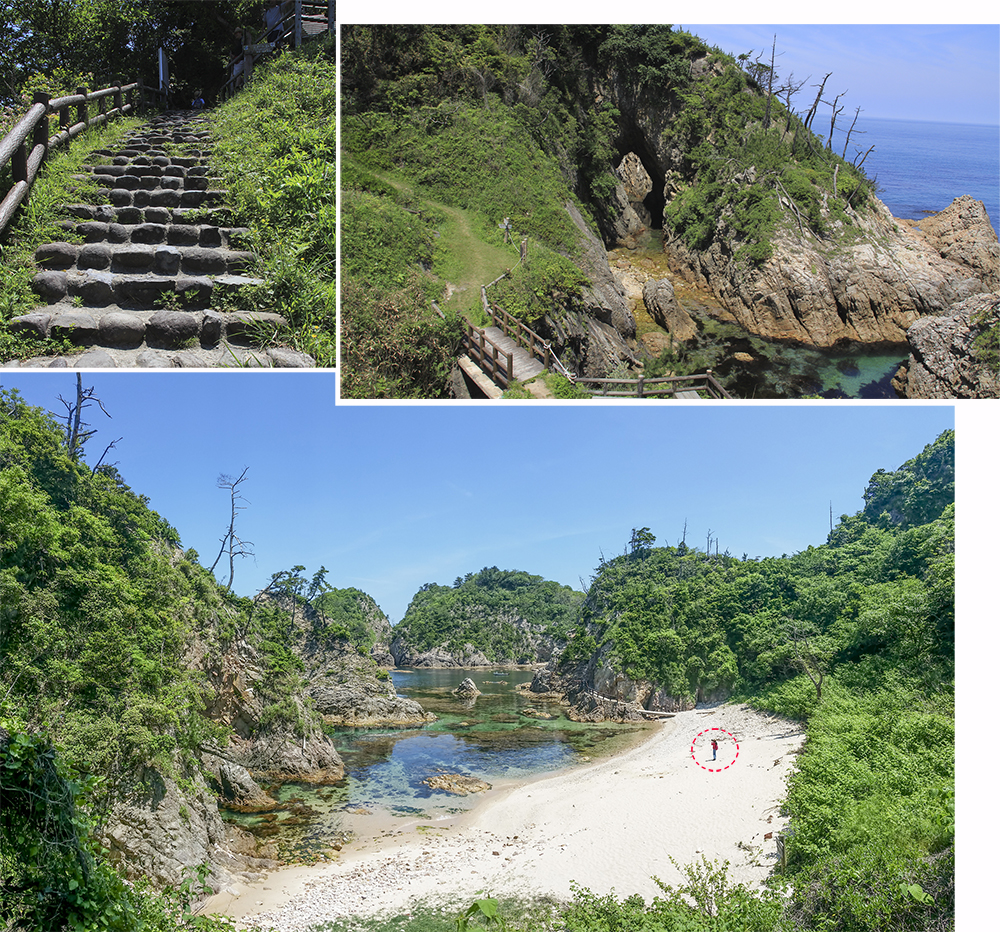 Going down to the coast of Uradome

Uradome coast was more beautiful than our expectation. The sky was so prettily blue and the sea so transparent and turquoise. The rock formations (little granite islands) that jugged out of the water topped with trees and foliage added so much character to the place. The scenery we saw were so un-Japan-like. 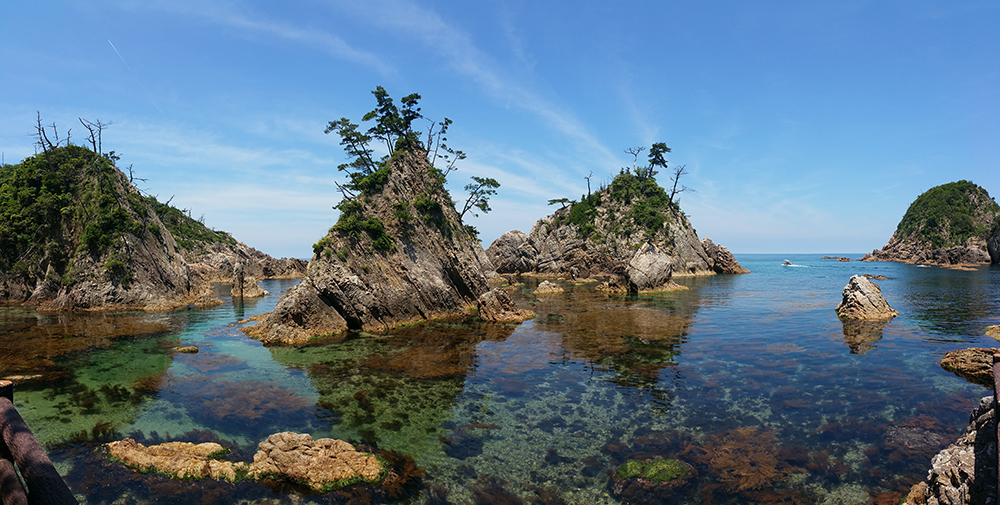 We saw a small empty boat in the water and wondered how it got marooned out there. After a while we saw a person in diving suit surfaced from the water. He did not seemed like a fisherman more like a tourist scuba diving. Then a boat arrived with some people on board. It stopped and each person except the boatman took out this cone like apparatus and looked through it into the water. They did not looked like fishermen either so I guessed there must be plentiful of corals or sea flora and fauna under the water. 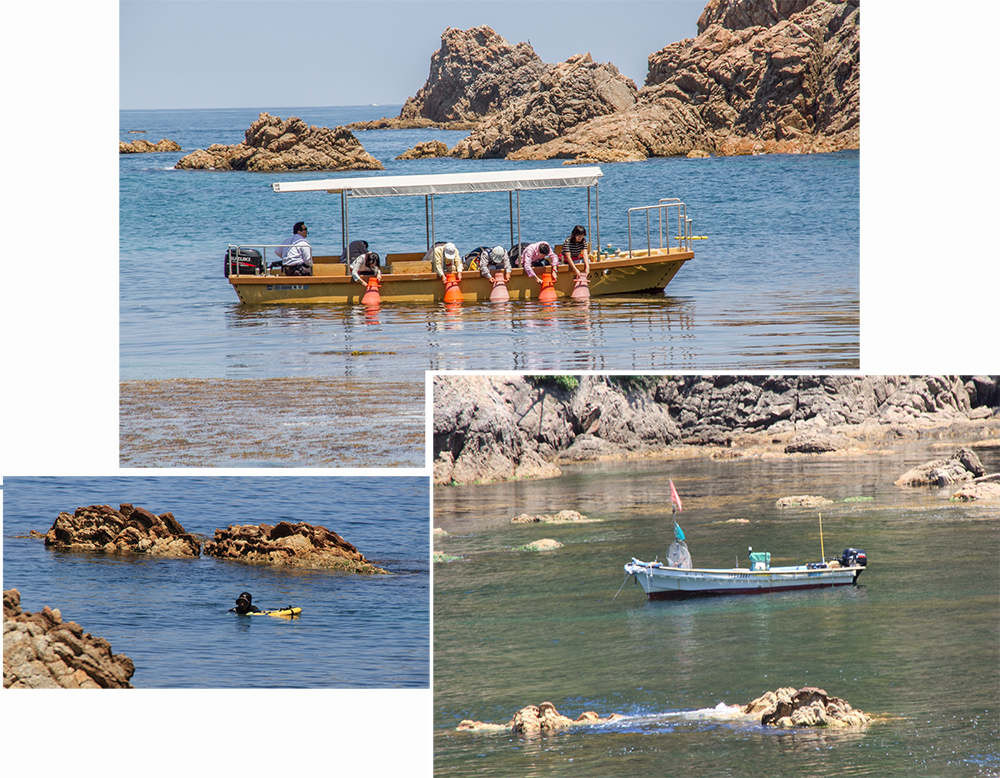 Tourist boat and a lone visitor on a small boat

Beside the numerous granite islets that peppered the coast the beach line was also very corrugated with many in and out curves and coves. Luckily there was a stretch of proper walking path so we were able to get round each outer bend without stepping into the water. 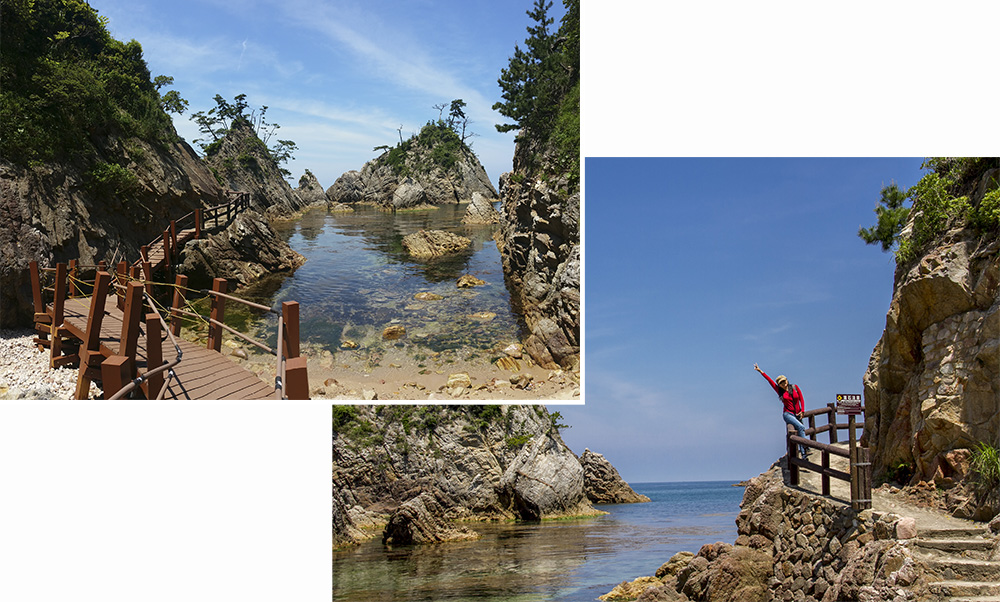 From a higher ground we saw a interesting hole in a huge rock by the sea, “a cathedral cave”? Unfortunately there was no steps or walking path to that huge rock. We searched around and found a thick rope tied to a tree beside an uneven slope. It looked like a possible way down. So down we went! Grabbing the rope we descended slowly and had fun exploring the “cathedral cave”. 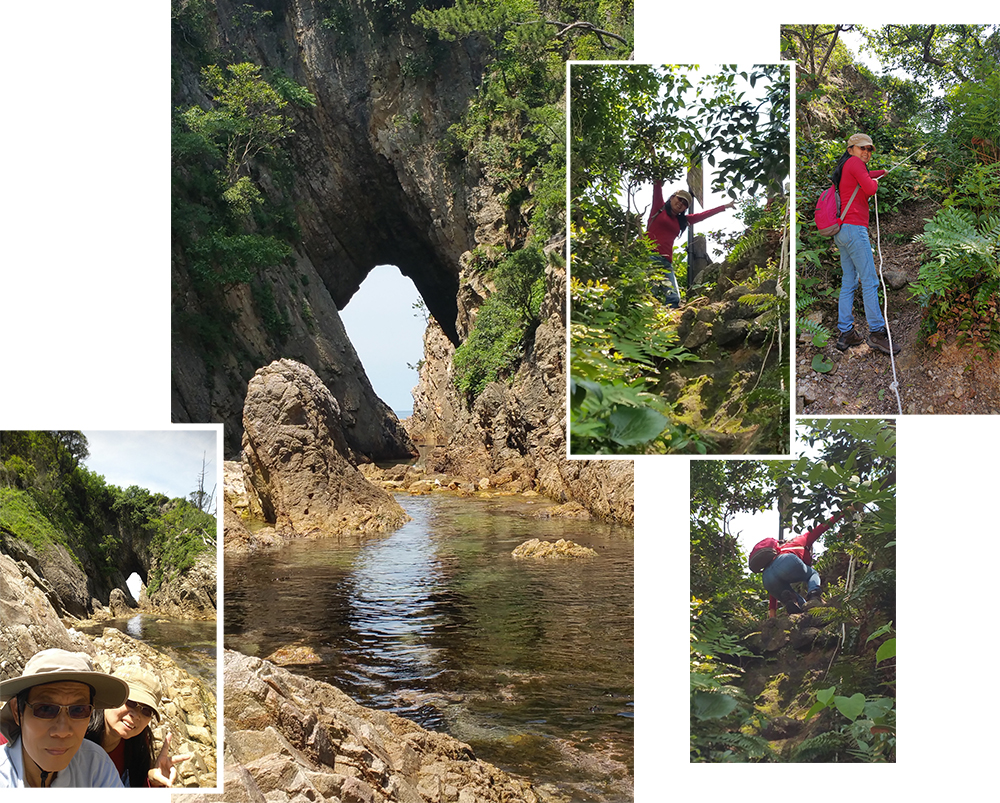 After about one and a half hour we were back to our car and drove down the road to “location 6” which was near the jetty. Beside the jetty there were proper parking lots so we left our car there.

Park our car at the jetty

We were not done with Uradome coast yet. We were searching for another path to go to another section of the beach/coast. There was a path just beside the parking lot, unfortunately it was roped off for maintenance. So we took another path that went uphill, after a short walk we reached the back of several houses, apparently the path went round the outer rim of a village. Then the path turned toward the sea and went down slope. 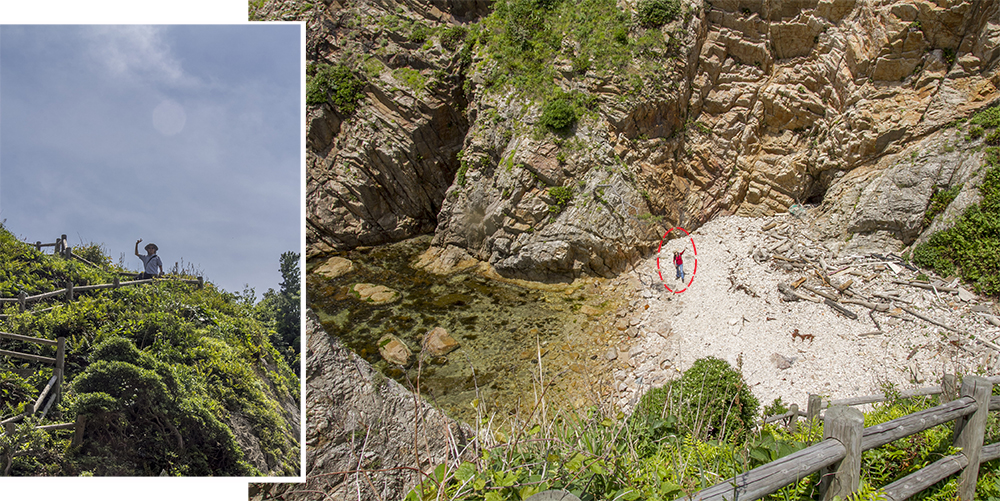 Walking down to the beach

This section of the coast had a famous rock island. It was named Sengan Matsushima, this triangular granite rock island of 25 metre high had a solo pine tree at its peak and a hole/cave in its middle created by years of pounding waves. Again we saw a tourist boat ferrying many tourists moving along the coast. It was not in our plan to view the coast on a boat, so I did not know where were the ferry operators. On hindsight viewing the coast on a tour boat could be better as it would definitely cover more of the coast line. 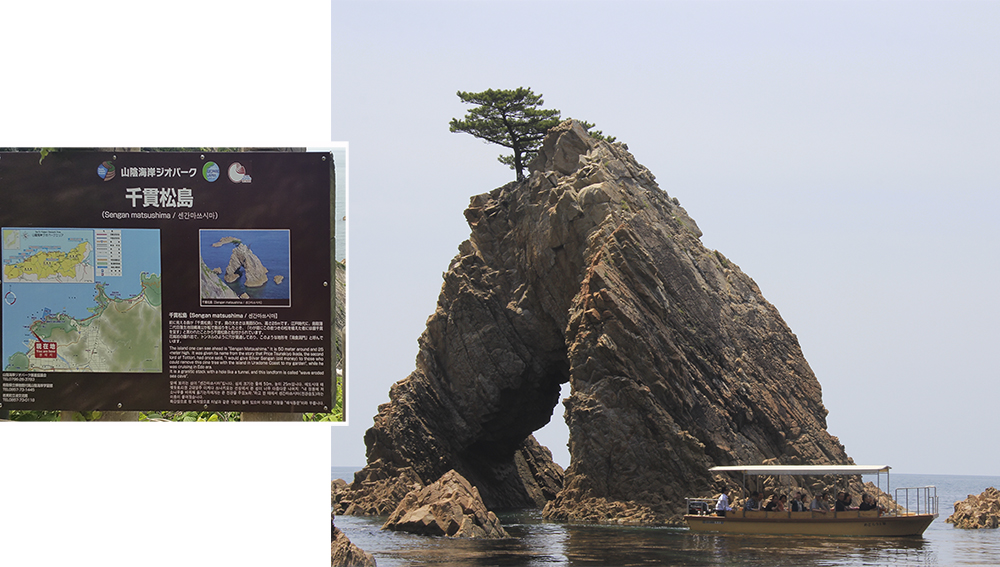 We left Uradome coast for Tottori sand dune at about 2 pm. The drive was only 17 km and took 15 minutes. The car park at the dunes was huge with many shops and restaurants. Unlike Uradome coast this place had many visitors. This car park like the previous car park was free. 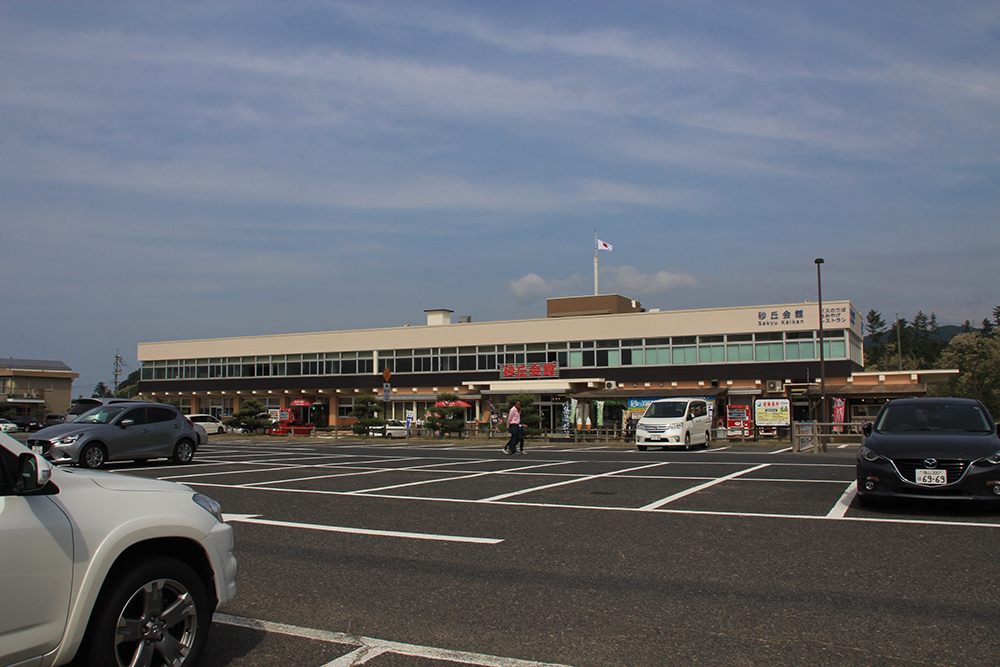 From the car park we had to walk up a short flight of steps to the beach. As we go up we saw many people shaking sand off their shoes as they came down the steps. I could only hope that my high ankle trekking boots would not allow in too much sand.

Finally we were at the longest and largest sand dunes in Japan. Tottori beach was 16 km long stretching east to west and 2 km wide. 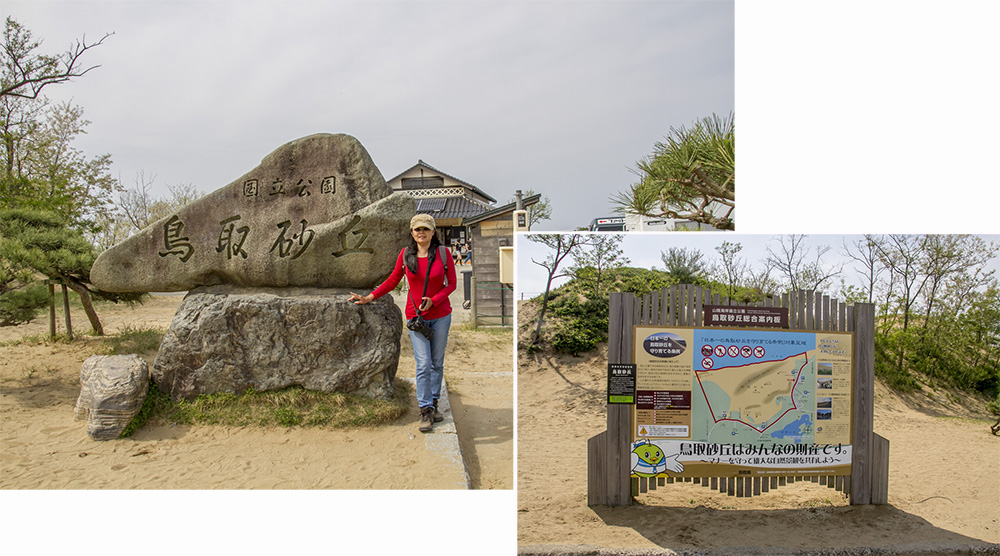 Wow the sand dunes were immensely huge. The humans up the sand hill looked like tiny specks. I was all excited about walking to the end unfortunately Yat Thong did not want to proceed. Our compromise was for him to stay put and wait. I would go on my adventure and return later.

I set off and walked and walked, occasionally I would turn back and wave at Yat Thong. The further I got the smaller Yat Thong looked, soon I he too became a speck. 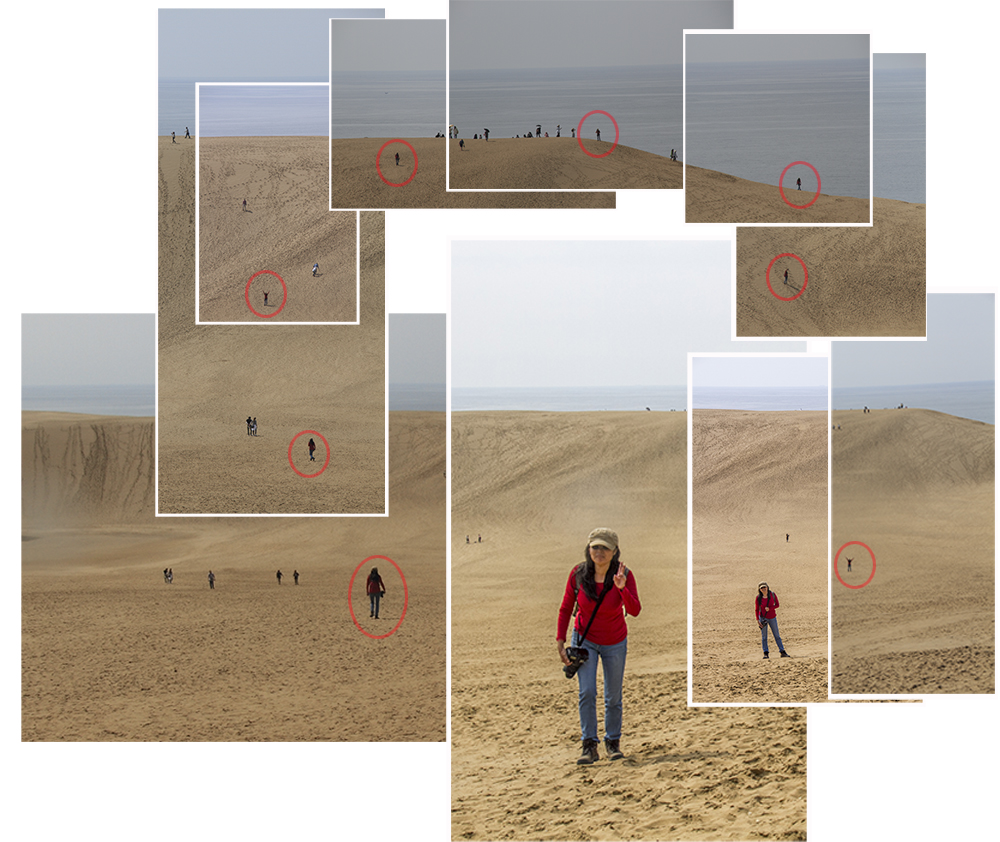 As I walked I could not  help being impressed by this breathtaking and beautiful natural phenomena around me. This place was the result of volcanic ash from Mt Daisen settling in Sendaigawa river. The sand was washed out to sea and eventually redeposited along the coast by ocean currents. The dunes were formed over a period of almost 100,000 years.

I reached the base of the hill and looked up. It was going to be a long way up and there were no steps! 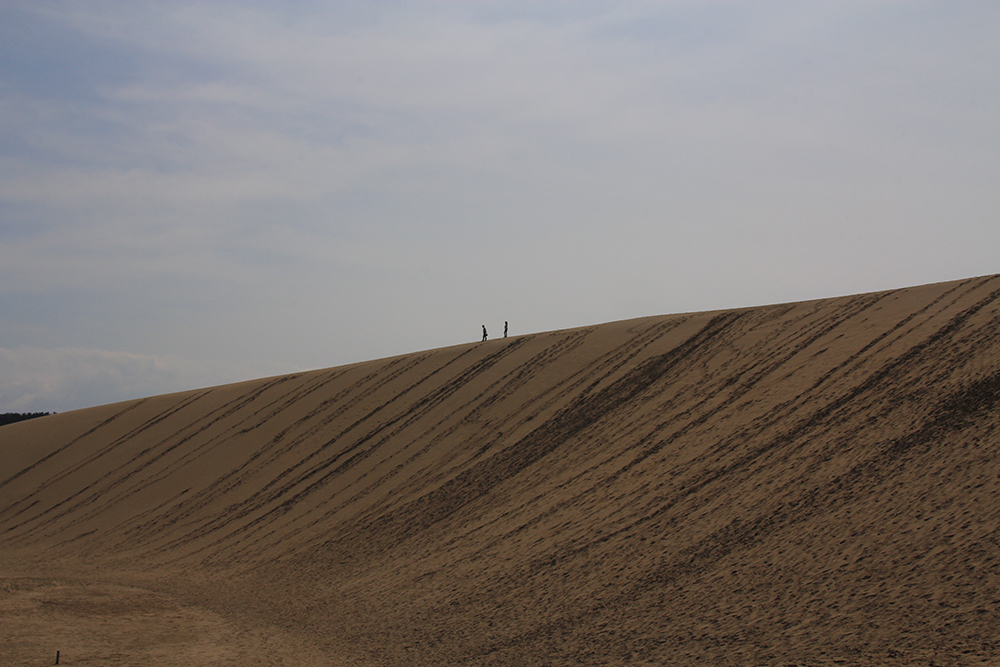 At the base of the hill

On the slope of the hill, the sand under my feet was more fluid. For each step I took up the slope, I could feel my foot sinking inches into the sand. Going up was not as easy as I thought as the sand under my feet slipped backward as I walked. When I reached the top I was a bit out of breath. I stood for a while on the ridge of the hill staring at the sea in front of me. Over the ridge was a gentle drop of 40-50 metres to the sea. Not many people went down to the water line. Most of people, like me just stood at the top of the hill enjoying the cool ocean breeze before turning back.

My round trip to the top of the sand dunes and back took about 1 hour. It did not have to take so long if I had not stopped frequently to take photos and selfies. It was near to 3.30 pm and all the walking made me very hungry and we went into the restaurant by the car park to had a seafood lunch set. It had fish roe, crab meat, sea urchin, fresh prawn etc. We ordered only one set to share between two of us, we did not want to be too full as we had a long drive ahead. 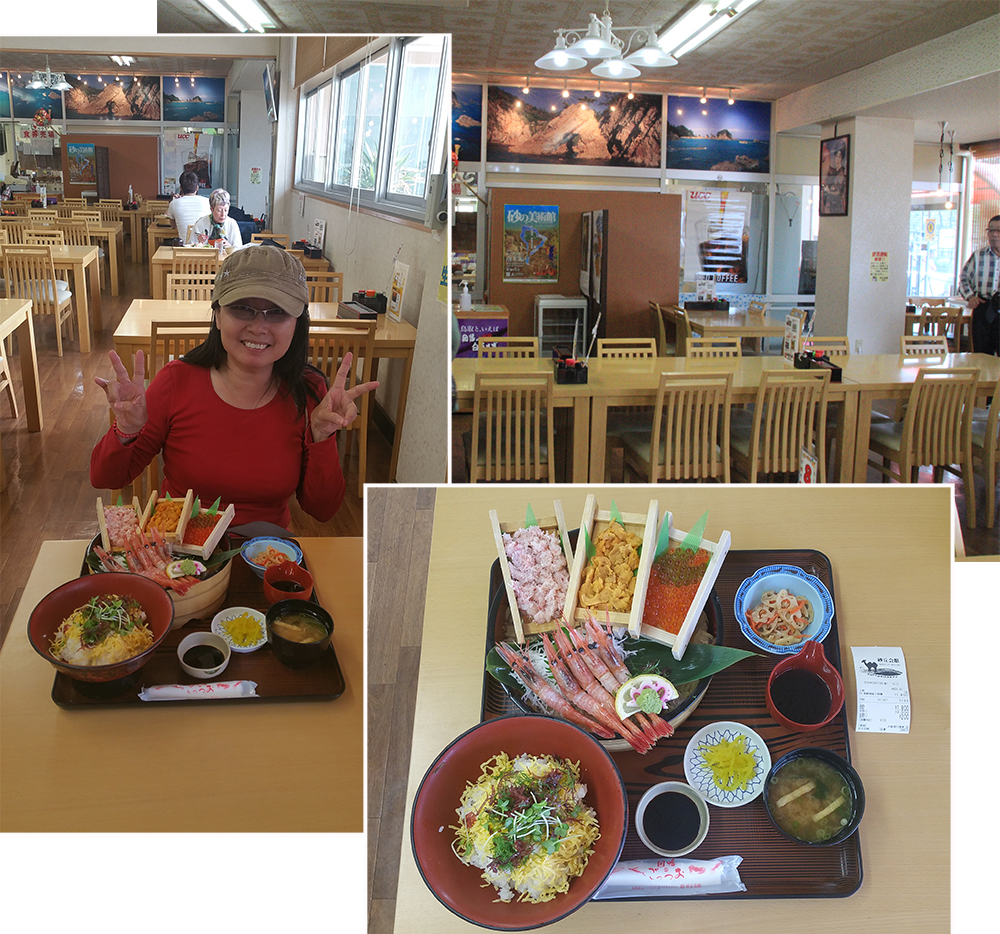 The drive to Lake Shinji at Matsue took longer than expected. The distance from Tottori sand dunes to the sunset observation deck of Lake Shinji was about 123 km and the journey should take about 2 hours. Unfortunately when we reached Matsue there was heavy traffic on the road and the congestion added another 30 minutes to our travelling time. The delay might cause us to miss the sun setting. Sunset for the day was at 7.03 pm and we had to be at the observation deck by about 6.00 pm so as to catch the view of the setting sun.

I had already checked out the vicinity around the sunset observation deck. The deck was on one side of a highway and the nearest parking lot was on the other side of the highway. Our car was driving down the highway on the same side as the deck so we would need to look for a U-turn to go over to the opposite side for the car park. Just about 500 metres before the deck we saw a set in by the road and it was a small car park with empty lots. We quickly parked our car, took out our cameras and tripods and walked forward to the observation deck. 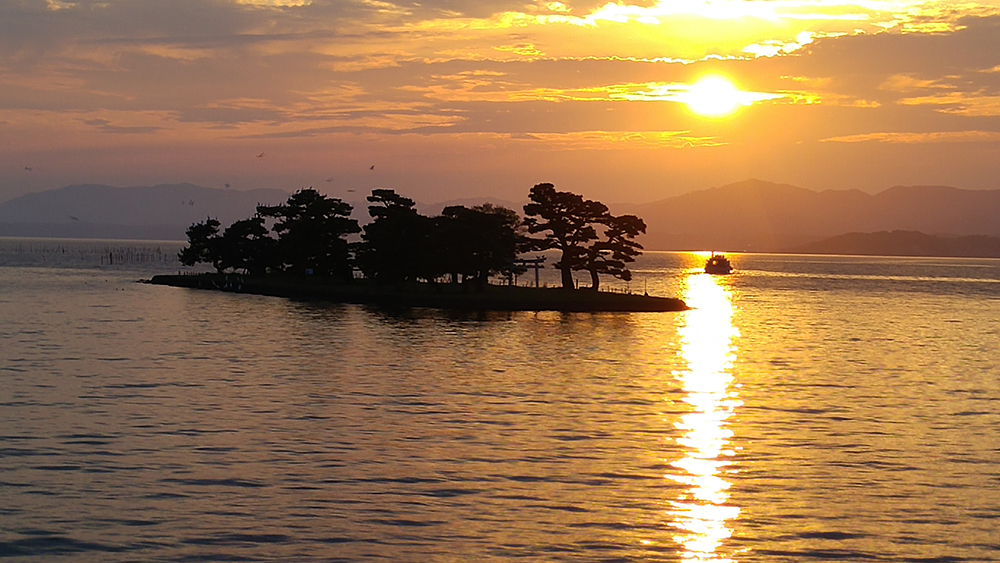 By the time we set up our cameras on the tripods it was already 6.30 pm. The sun had already begun setting. Gradually the entire scene in front of us turned golden. The sky and the sea were golden, the sun was a bright golden ball, its reflection in the water was a long strip of shimmering glowing liquid gold. It was so beautiful, unbelievably beautiful.

There was an island, Yomegashim Island, at about 200 metres from the lakeshore. This tiny island with its torri gate and pines trees that looked very normal before the sun set became a stunning silhouette that intensified the golden hue of every things around it. 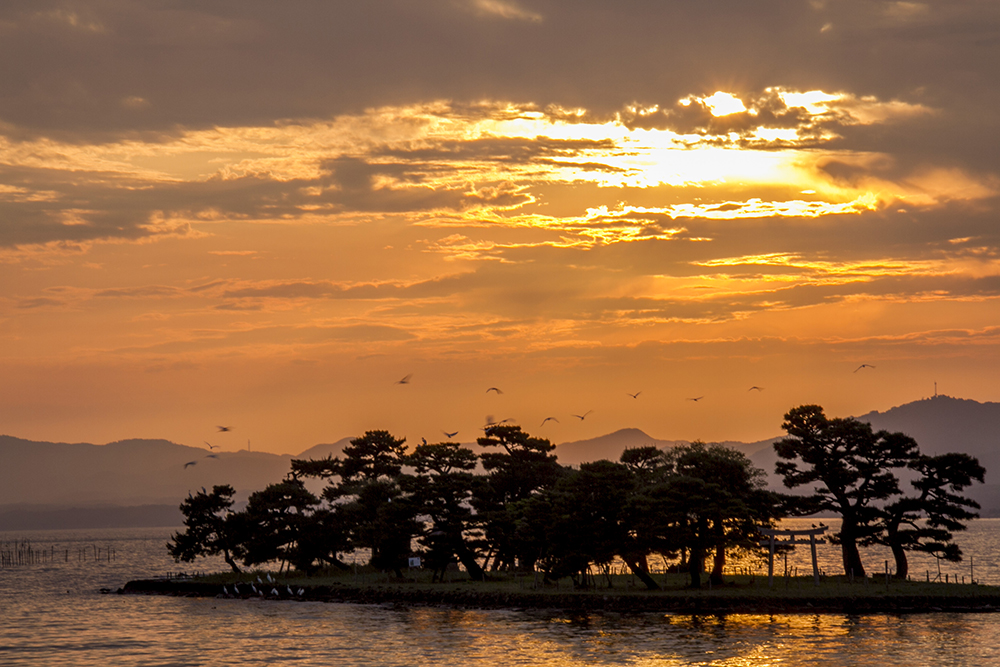 There was a Japanese folklore about this island, the island name also meant “Bride island”. This island was raised from the lake by gods who took pity on a young homesick Japanese bride who when crossing the frozen lake fell and drowned. The island was at the exact location where she died. 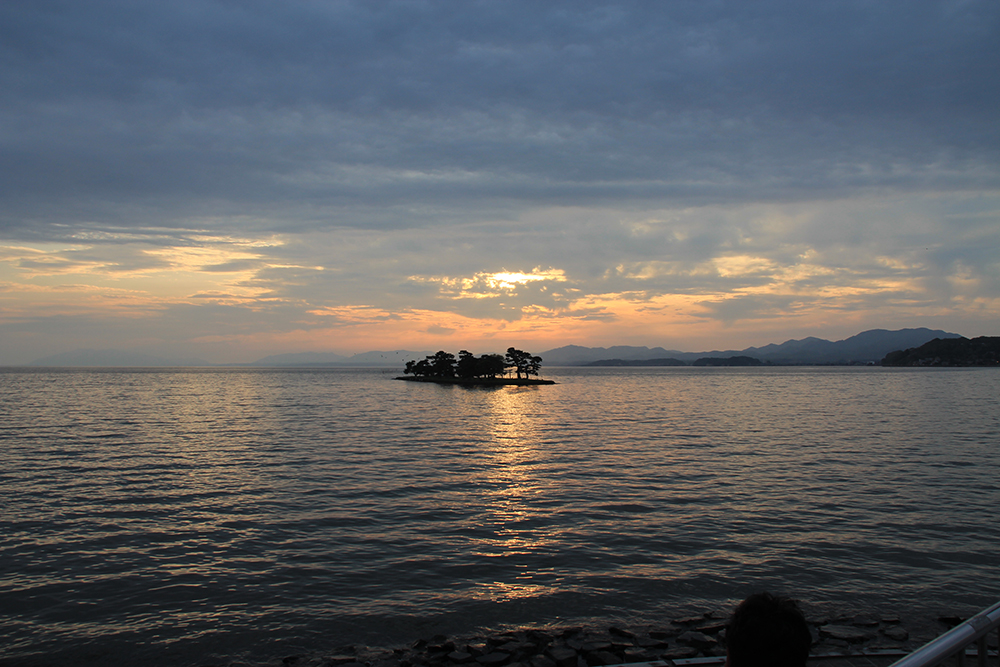 We had our dinner at a ramen place at Matsue Station which was just short distance from our hotel for the night. The ramen was very nice and the store attendant was very helpful. When she found out that we were from Singapore she took the time tovexplain to us in English the many variety of ramen available on the menu and helped us with our selection. 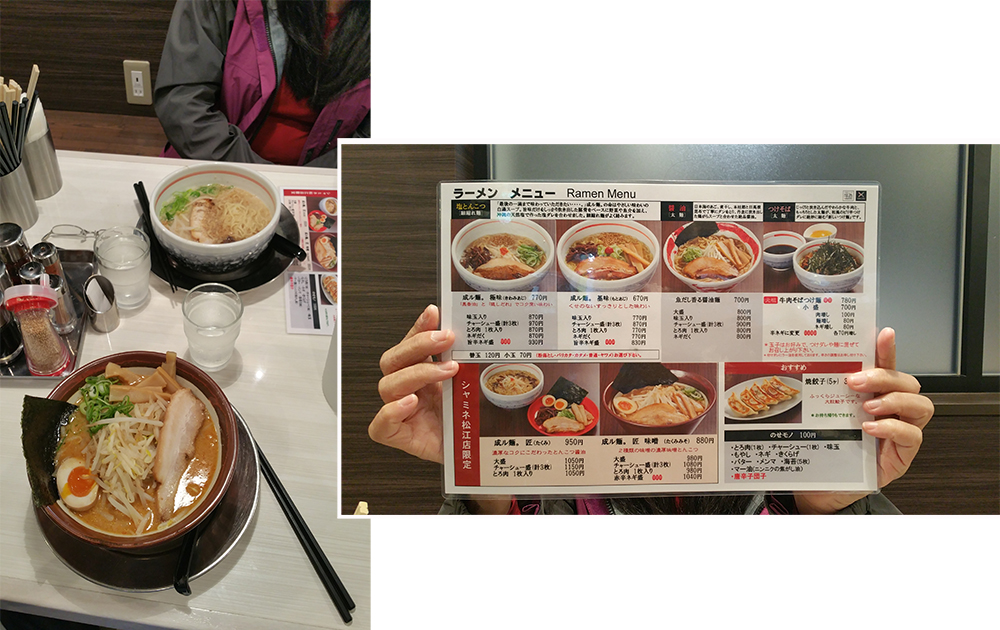 Accomodation for the night

Our hotel was Toyoko Inn Matsue Ekimae. It was located about 1.5 km from Shinji Lake. This hotel was just a short walked from Matsue Station where there were plentiful of eating places. The cost of the double room was ¥8926 and parking was ¥800. This hotel was more expensive than other Toyoko Inns. 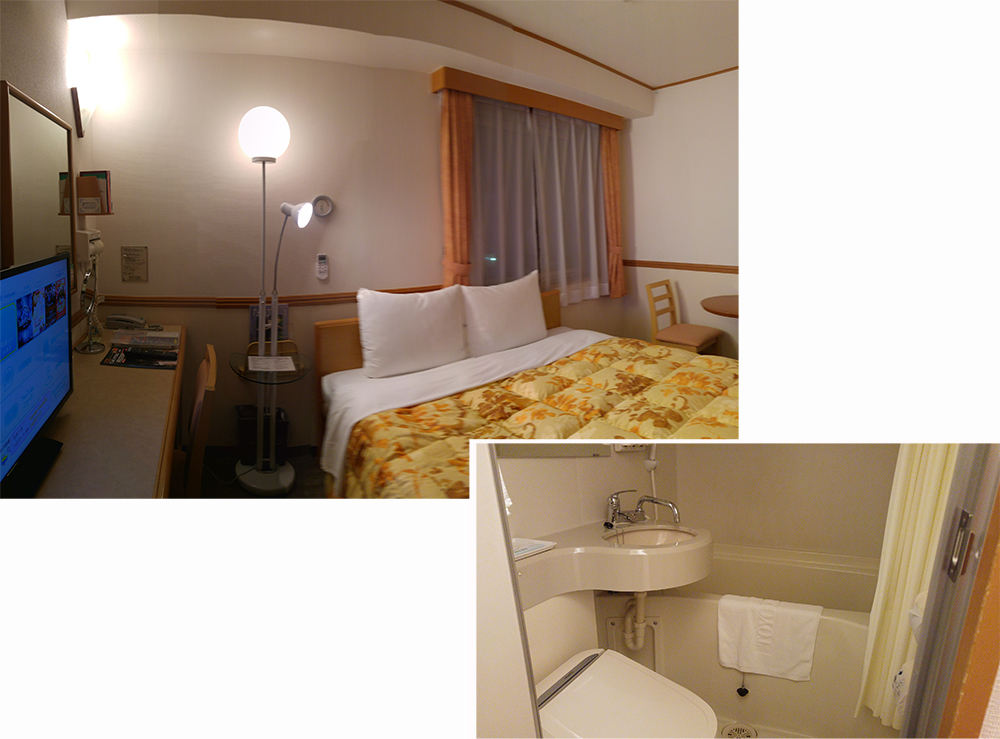