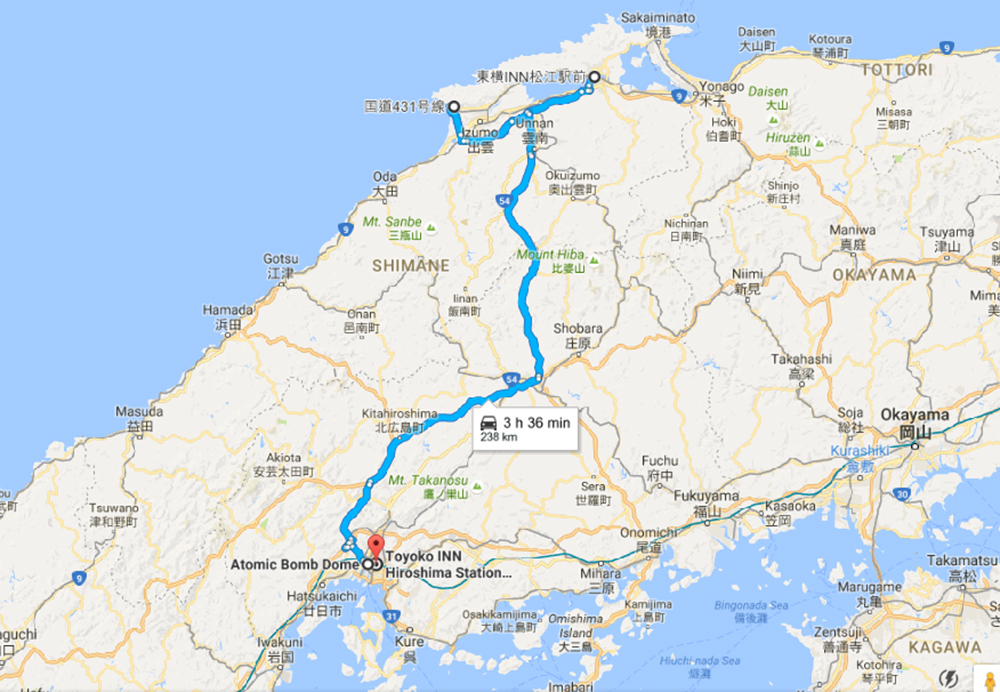 It was a relaxing day and we achieved all our sightseeing destinations.

From our hotel we drove about 40 km to reach Izumo Taisha which took about 40 minutes. We drove passed the south entrance of Izumo Taisha and found a car park quite easily round the corner. 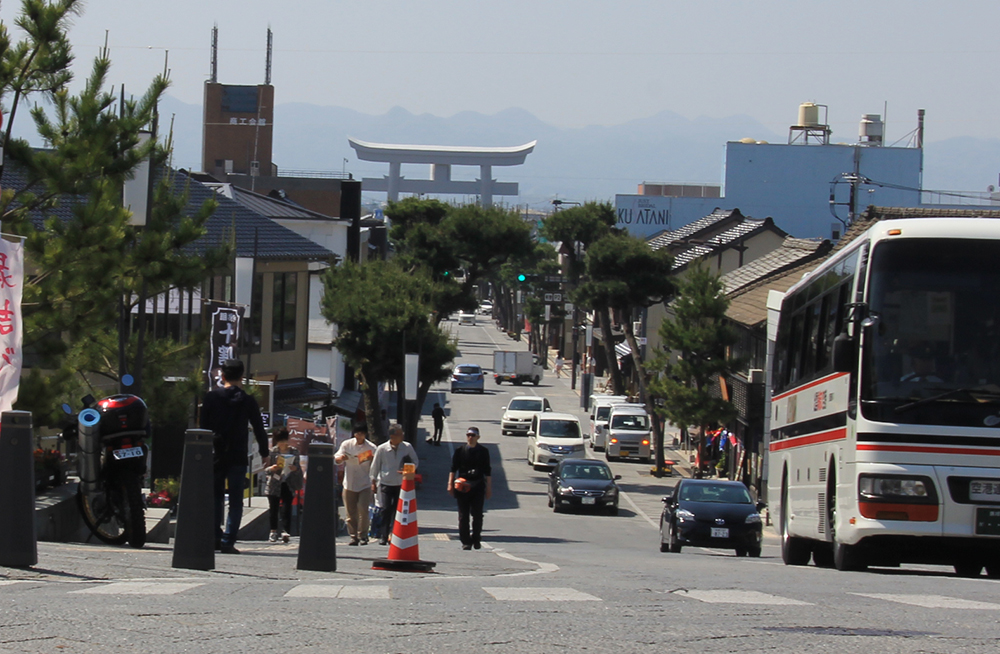 At the south entrance looking away from the shrine toward the south we saw an enormous Torii gate half a kilometer away. It was so huge, towering over the rows of shop houses on both sides of the road leading directly to the south entrance of Izumo Taisha. This torii gate was said to be the largest in Japan.

The second torii gate, a smaller one, stood just at the south entrance before the compound of the shrine.  Beside the gate was a stone pillar with the name of shrine (出雲大社) carved in Kanji. 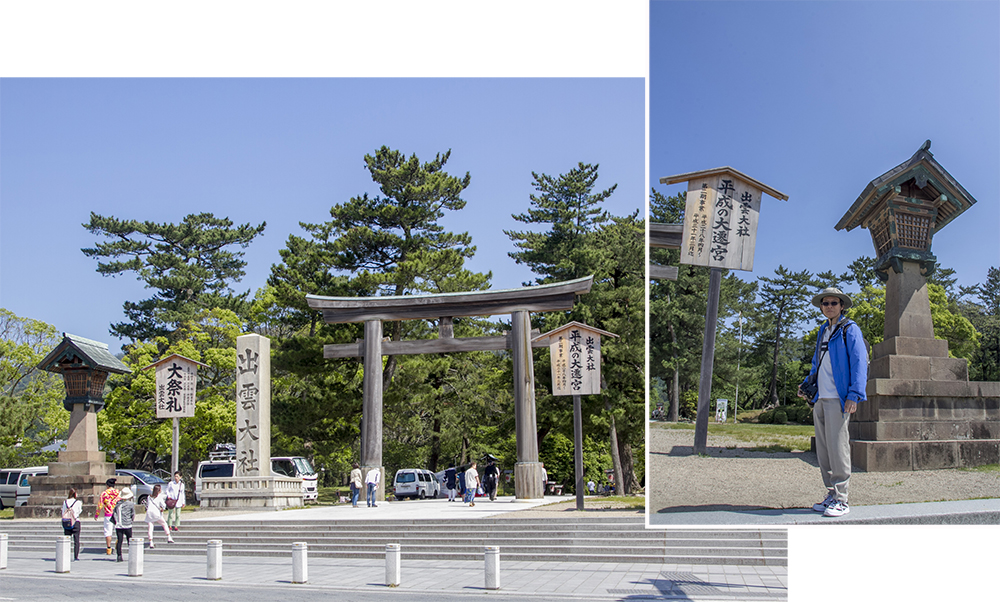 After the entrance was a broad paved walkway with tall trees lining both sides. Beautiful lanterns decorated the entire length of the path. It would surely be very beautiful at night when all these lanterns were lighted up. 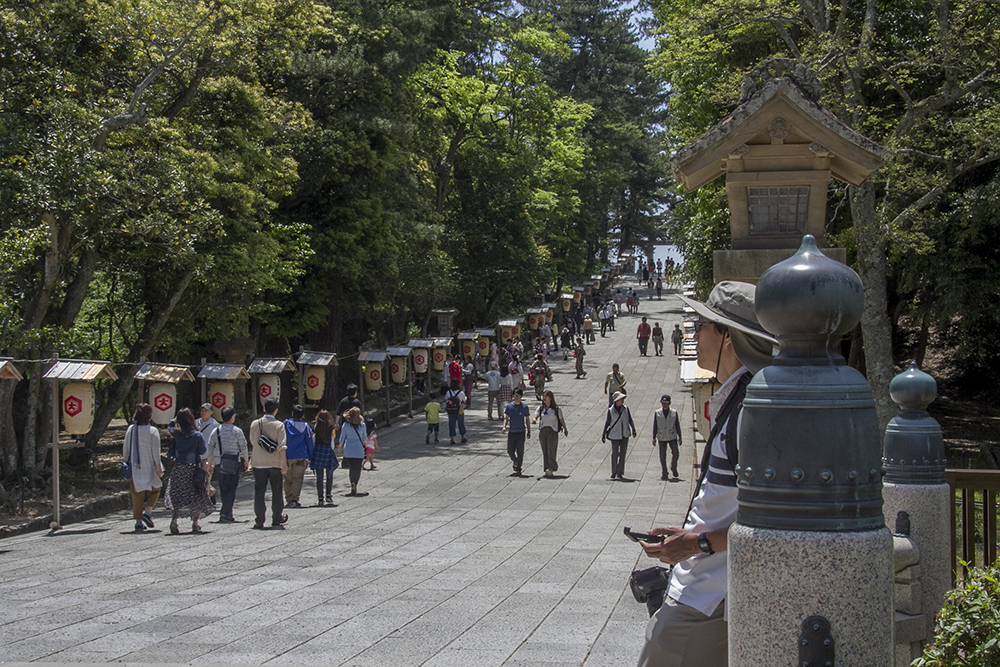 After walking a short distance we came to the start of an arch bridge. At the end of the bridge was another torii gate marking the start of another walkway. This walkway was divided into three lanes. Tall and old pine trees lined all three lanes giving cool shades to the visitor. I wondered why nobody walked on the center lane and found out from a signboard that stated that the center lane was intended for deities. Only Shinto priests and the  Imperial family could walk in the center lane. 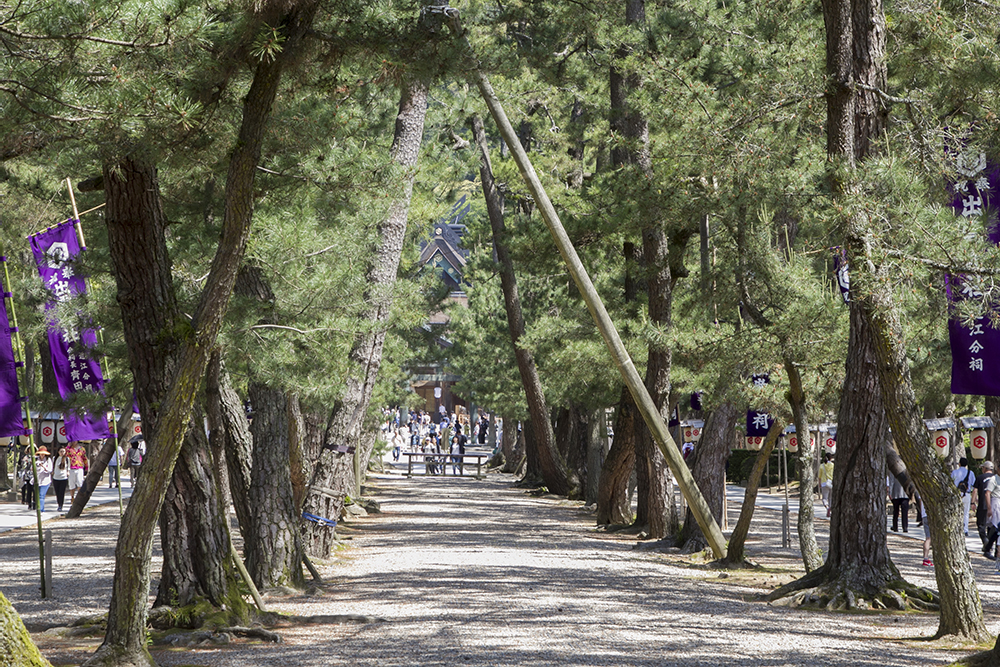 At the end of “Matsu no Sando” we crossed another torii gate we could finally see the Haiden (prayer hall). But before we approached the Haiden we walked to the right to a huge pavillion (chozuya) with a purification trough in its center. We queued for our turn and went through the “cleaning” ritual. 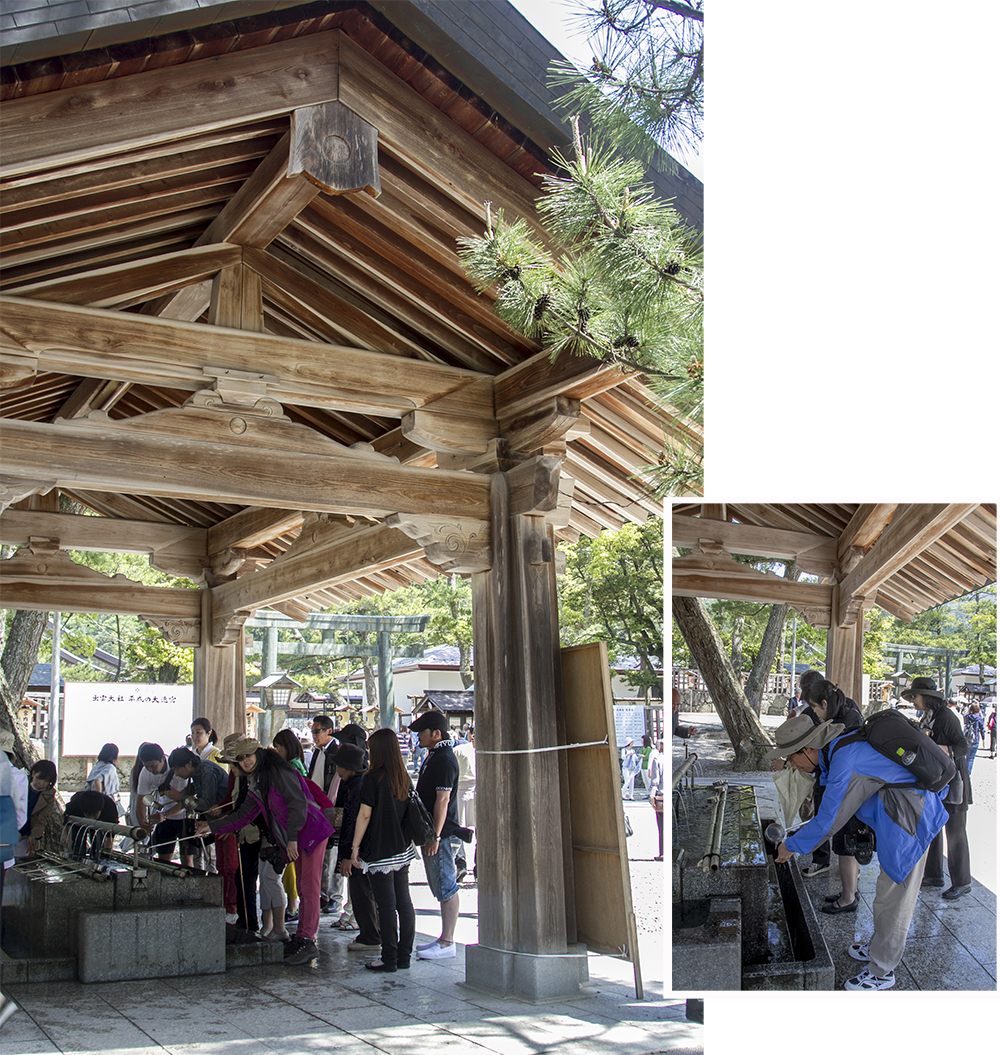 The Haiden Hall had a huge straw rope (Shimenawa) tied to its top beam. This rope was 6.5 metres long and weighed 1 ton. The Shimenawa divided the space between the scared area where gods were enshrined and the outside world. I had seen shimenawa in other shrines before but this one in Izumo Taisha was much bigger, thicker and longer. I especially liked how the two ends of the rope tapered off neatly very artistic. 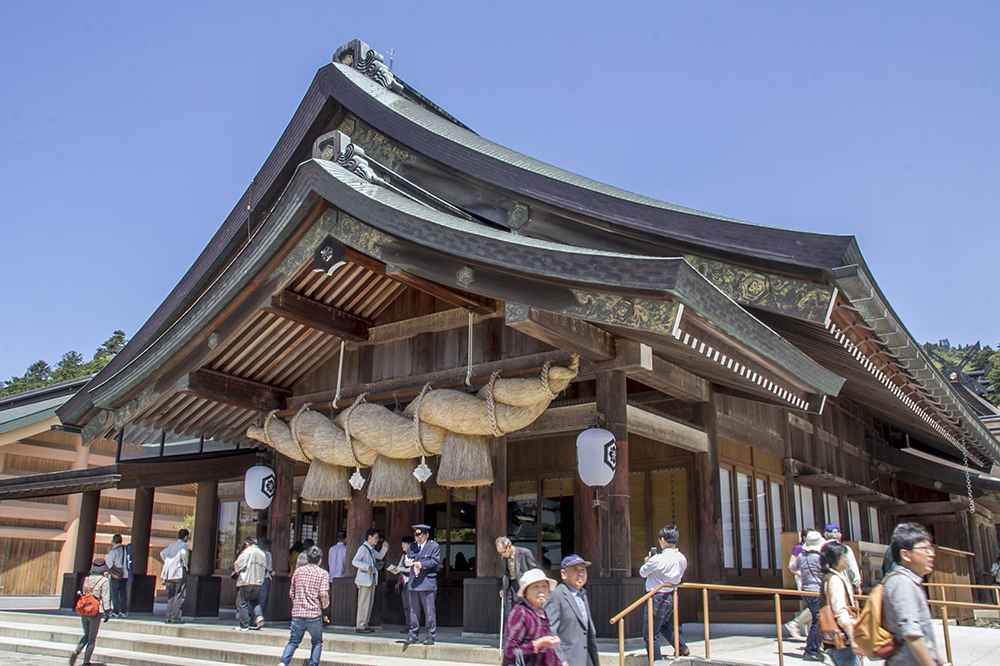 We heard a commotion and saw a group of priests walking out from behind the Haiden, their faces looked very serious and they marched out through the torii gate. I tried asking the other visitors if there was a event going on but nobody could tell me anything. After some times we saw the priests came back and two of them were carrying a box covered in green cloth. 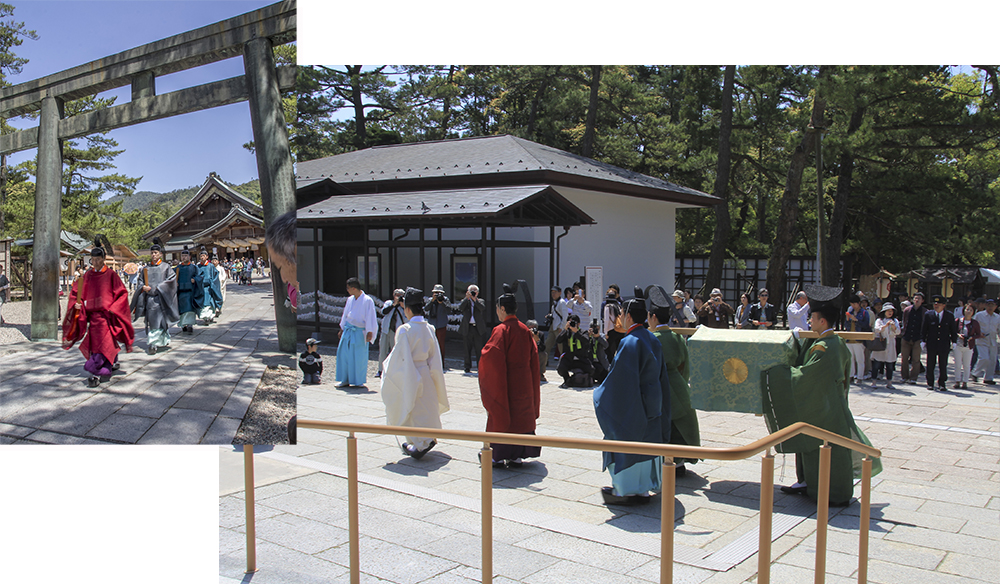 We followed the priests to the back of Haiden. Behind the Haiden was  the main hall (Honden). The main hall was surrounded by a boundary wall. The priests went through the Yatsuashimon-gate and disappeared behind the white curtains. Some religious event was going on in the Honden and only specially invited guests were allowed in. 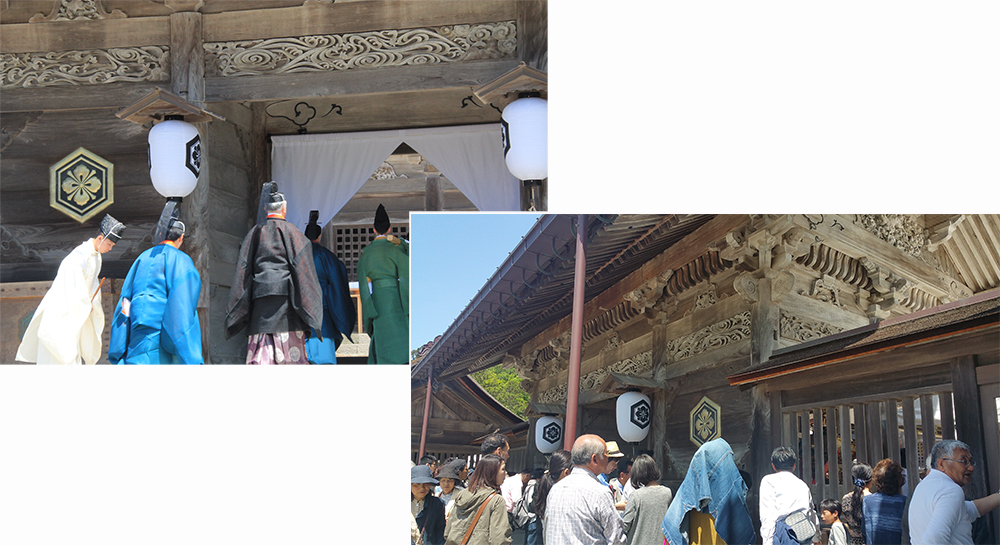 Since we could not go into the Honden we did a loop and walked round the outer wall of the Honden. 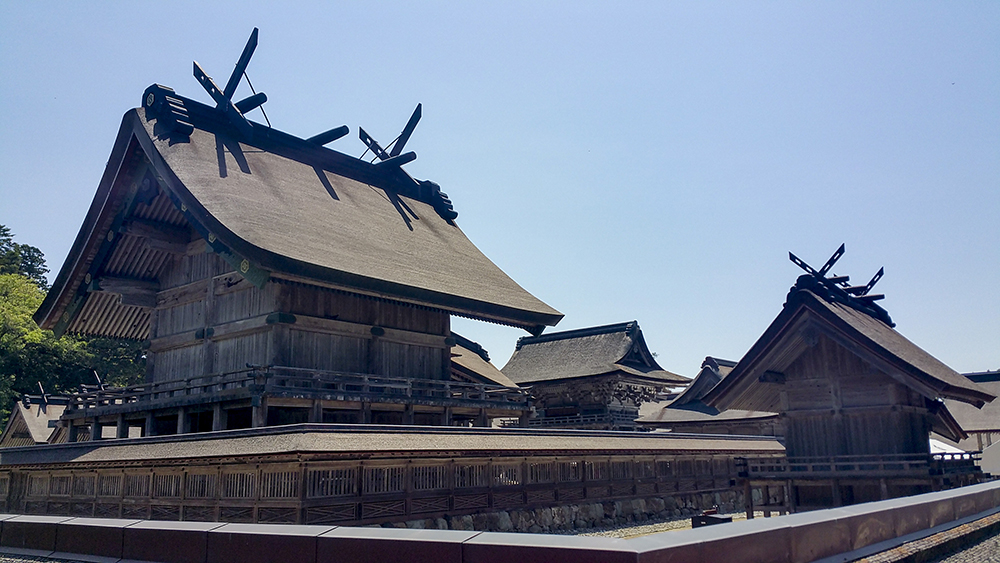 The main hall (Honden) was fenced off

After two hours we were done with Izumo Taisha. I remembered seeing a Starbuck near the south entrance so we were off to Starbuck for our tea break. It was cheese cake, chocolate cake and cafe latte for us. Yummy and happy. 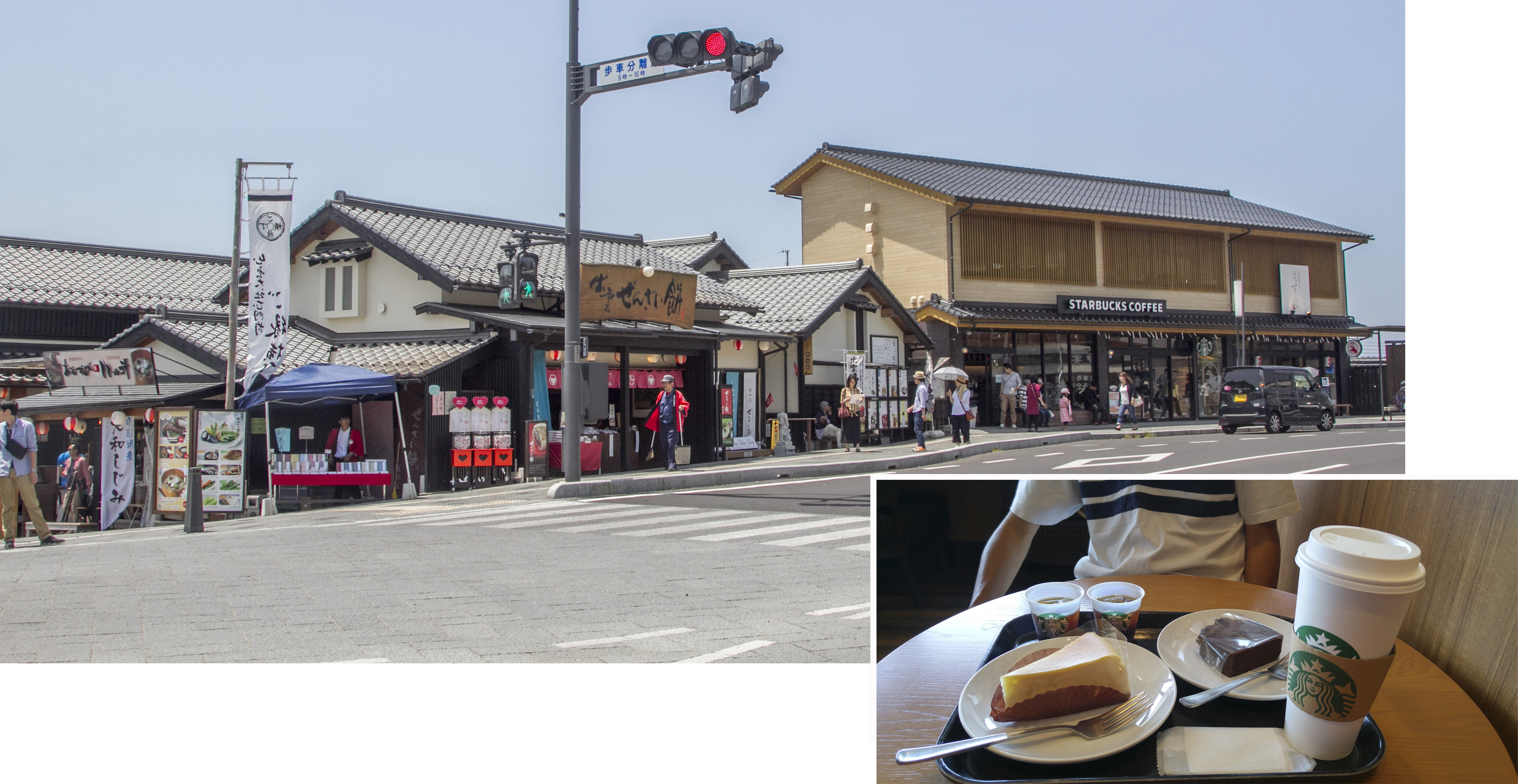 There were many shops beside Starbuck selling all sorts of stuffs and food. The back lanes were prettier than the main road. From the front I did not expect to see such a cosy and colorful back lanes, it was just luck that brought me to these pretty backlanes. 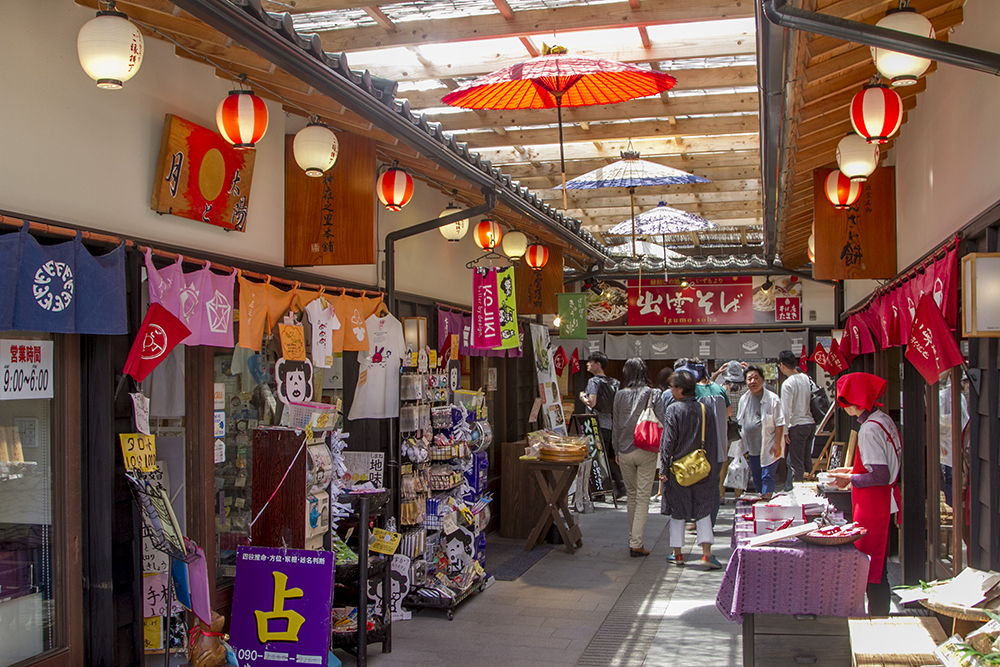 Pretty and cosy back lanes

It was a long long drive to Hiroshima, about 180 km and it took us about 3 hours to reach Hiroshima. Our first destination in Hiroshima was the A-Bomb Dome. Unfortunately it was not easy to find a cheap parking lot that would be as near to the dome as possible. After 30 minutes of looping around the A-Bomb Dome vicinity we parked at a car park that charged ¥400 an hour. Though it was expensive it was only 250 metres to the dome 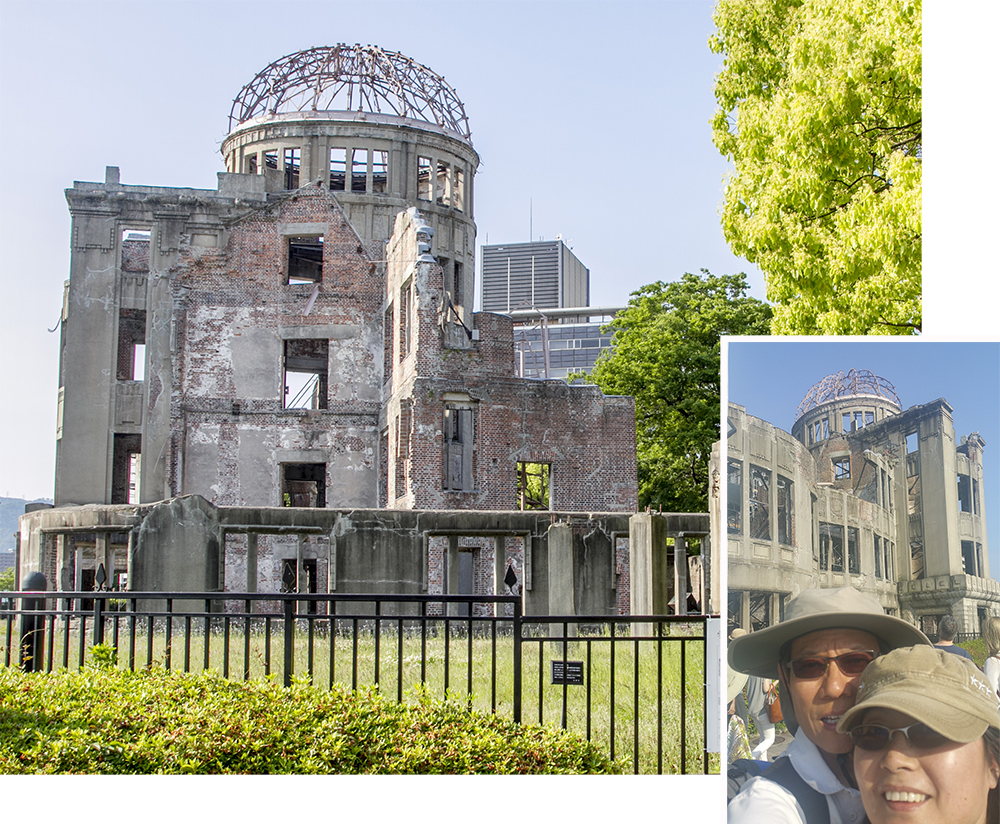 The A-Bomb Dome used to be Hiroshima Prefectural Industrial Promotion Hall and was called the Genbaku Dome. It was designed by a Czech architect in 1915. The A-bomb exploded almost directly overhead of the dome. The dome was 160 meters from the hypocenter of the atomic blast. Today the A-Bomb Dome was a UNESCO World Heritage site.

We were not really keen to visit A-Bomb Dome but still came along because of its great significant in history.

From our hotel to Hiroshima Castle was about 2 km, the distance did not seem long so we decided to walk to the castle. We left our car at the hotel car park and started our walk to Hiroshima Castle. Upon reaching the castle we walked round its perimeter outside the moat looking for a good location to photograph the castle. 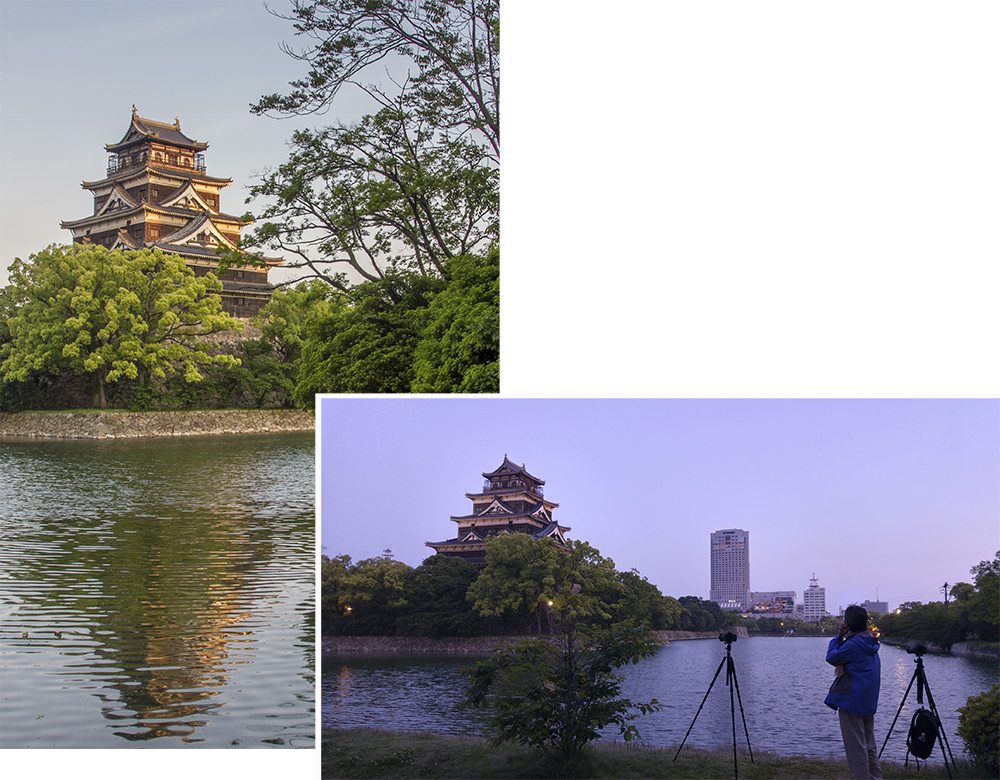 Hiroshima Castle just as the sun was setting

The castle was five stories tall. It was first built in 1589 but like the entire city it was destroyed by the Atomic bomb during the WWII. It was rebuilt some thirteen years later. The lighted castle looked very majestic in the evening. 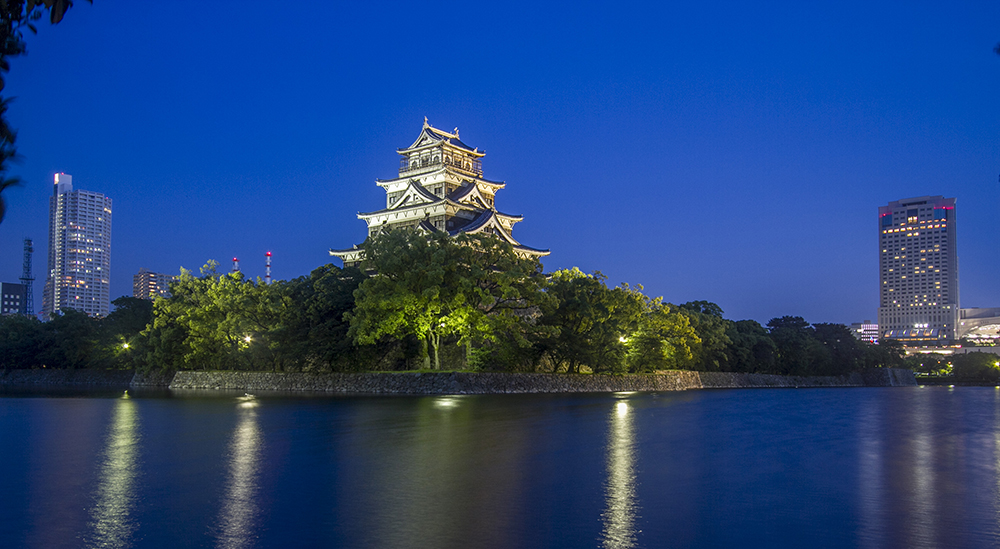 Hiroshima Castle at 7.30 pm (after the sun set)

Even when the sky turned from blue to grey/black the castle still looked beautiful. This was a castle in the middle of a modern city, it was a great thing that the castle was rebuilt and preserved till now, I was sure the Japanese were very proud of their heritage. 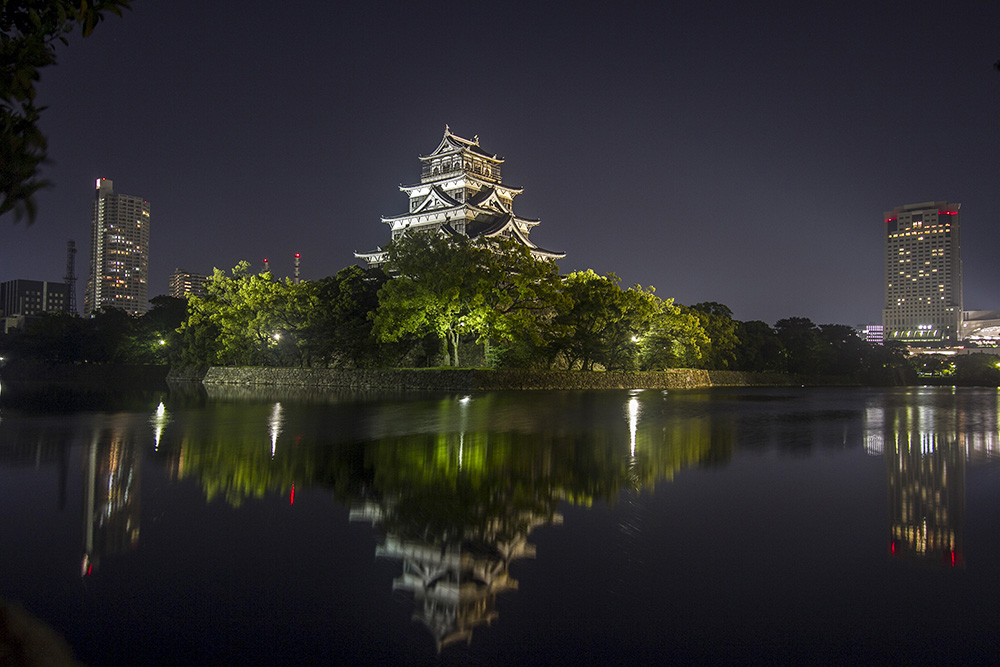 On our way back to our hotel we stopped at Sukiya to have our dinner. Sukiya was some sort of a Japanese fast food restaurant that served beef and rice. During our 2013 trip we ate at Sukiya several times, for this trip this was our first Sukiya dinner. Somehow during this trip we just did not come across Sukiya restaurant outlets as often as would like.

The total cost of our meal was ¥1650 pretty nice and reasonable. 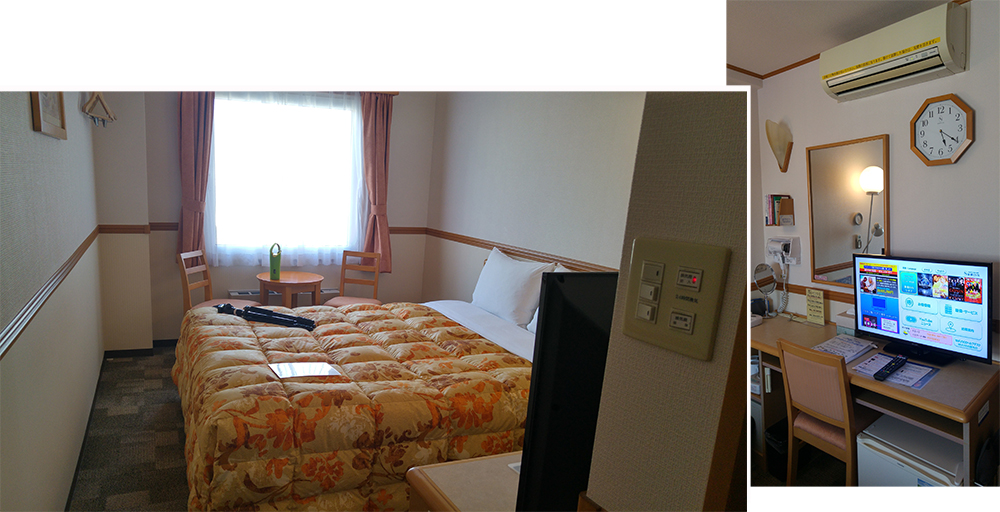