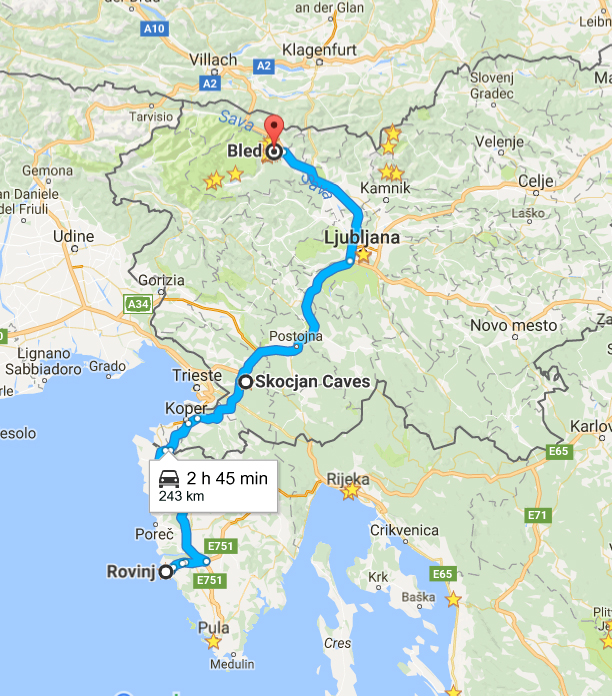 We and our rental car crossed the border without any issue and arrived at Skocjan Caves just in time for the guided tour. Skocjan Caves visit took about 3 hours which left us no time to visit Predjama Castle. So after the caves we drove directly northward to Bled town, checked in to our accommodation before going round the Bled lake for sights and dinner.

Rovinj In the Morning

We left our accommodation just after 9am. It was not our intention to leave so early but we left because of a power trip in the apartment! I was preparing breakfast, I boiled water using the electric kettle and turned on the oven to preheat it. And then the power trip! I went down the stair to look for a circuit board where I could power up the apartment again. I found two circuit boards but they looked fine, their master switches were in the “on” position, so I figured they were for the apartments on the 1st and 2nd level. There was also no point calling Diana to send somebody to solve the issue we would probably have to wait for hours. We just forgo cooking breakfast and left once we cleaned up and packed up. Just as we locked the door, I sent a message to Diana to let her know about the the power trip and that we were leaving. 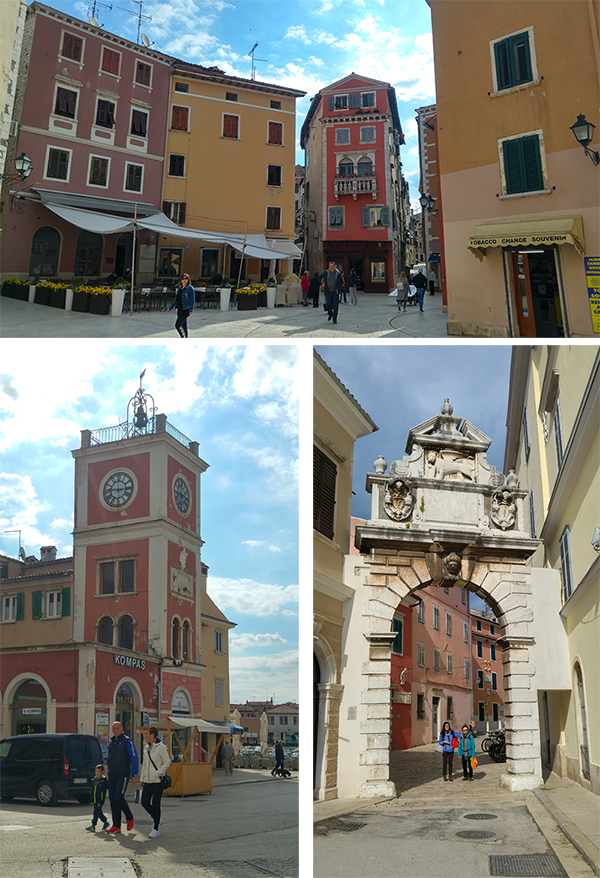 The took a leisure walk to the public carpark where we had parked our car overnight. It was early and the town was pretty quiet. Some stores were already opened for business.

Rovinj old town though was old was very clean. The houses and streets were well maintained. When I mentioned to friends that I was visiting Croatia, most would conjure up images of a poor country with falling-apart infrastructure, with potholes on the roads and beggars round every corners etc. But Croatia was nothing like that! It was a country with historical depth that had came a long way. It was a civilization that had gone on improving.

Croatia was actually a resort-style get away for its “richer” western European neighbours. Just before arriving at Croatia we stopped over at Paris for three days. Though Paris had the Lourve and Eiffel Tower, I found Croatia more cheerful and brighter, less crowded and safer and so much less expensive.

We found a nice cafe, Katarina that was opened for breakfast. It was its colourful frontage and outdoor seats that attracted us and suddenly we were all hungry for breakfast. We sat down to study its menu and found the pricing reasonable. 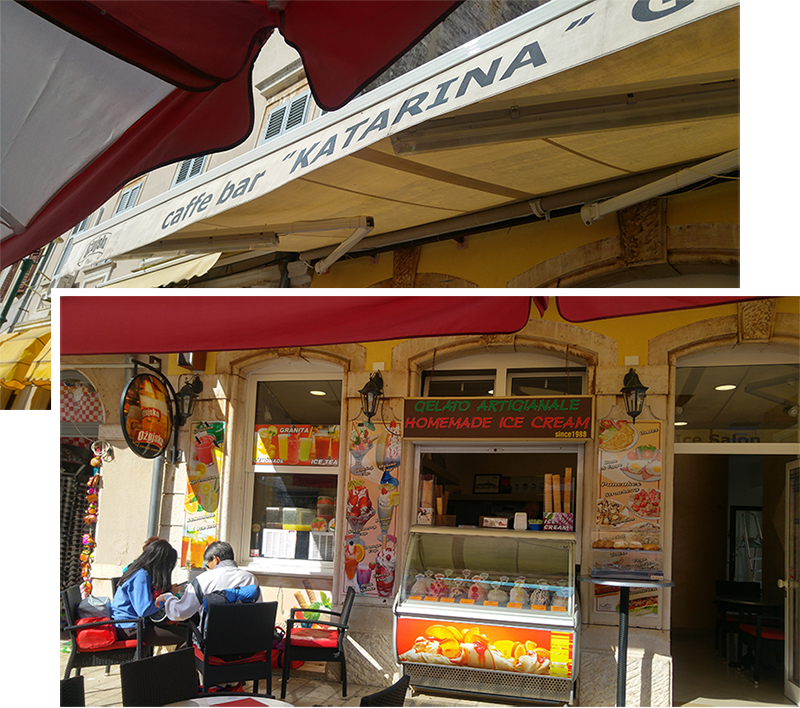 We ordered 4 breakfast plates and 4 cafe lattes. The breakfast was delicious and the entire bill came up to only 169kuna (SGD34 or €23 ). Loved the nice hot meals and drinks and the best part was no washing and cleaning up of plates and cups later! 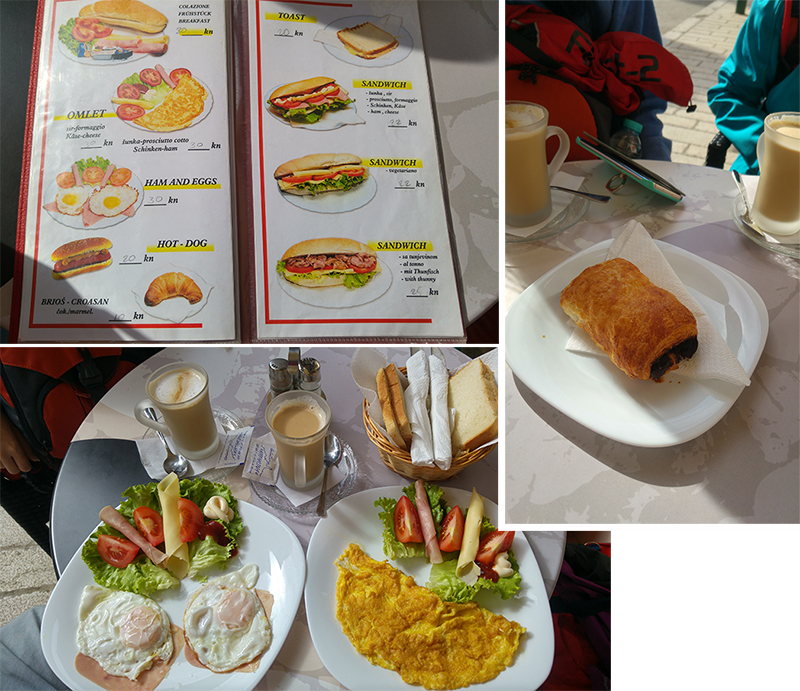 After breakfast we continued in the direction of the carpark and saw a market. This was Rovinj Green Market. At the market we found fruits, vegetables, cheese, mushroom, liquer and honey. One particular goods caught our interest. Truffle!! 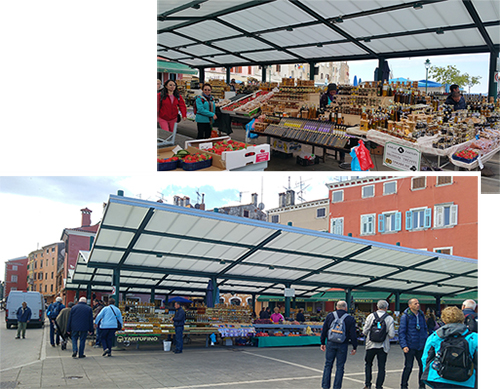 Apparently beside Italy, France and Spain which were the traditional truffle production countries. Croatia’s Istrian forests boasted three sorts of black truffles as well as the big white truffle (one of the most prized in the world, at 34,000 kuna per kilo). After much deliberation we opted for a small bottle of olive oil with two small black truffles (size of grape) in its. It costed 150 kuna (SGD$30 or €20). 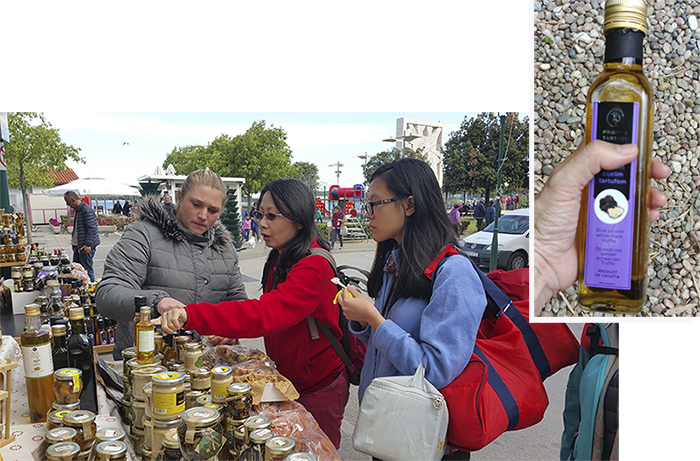 Time passed so fast, as soon as we had arrived yesterday we were leaving today. Rovinj old town was indeed beautiful and its best view was from the wharf near the public car park. The sight was beautiful whether day of night. From there we could see that the town houses were built all the way to the edge of a small hilly peninsula. These colourful houses looked as through they had risen from the sea, so picturesque. 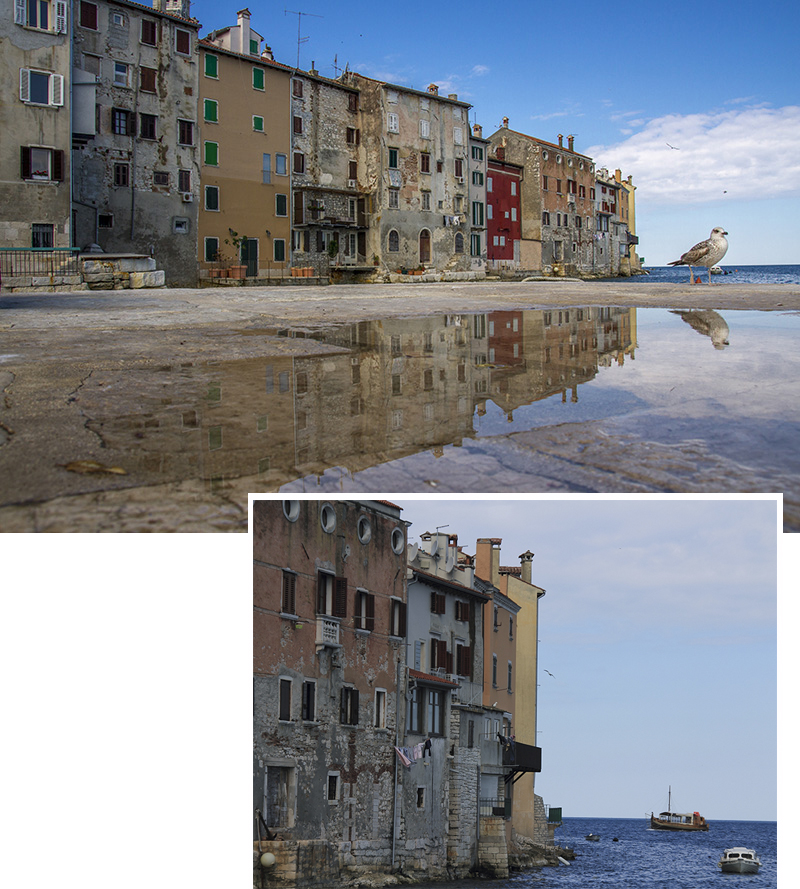 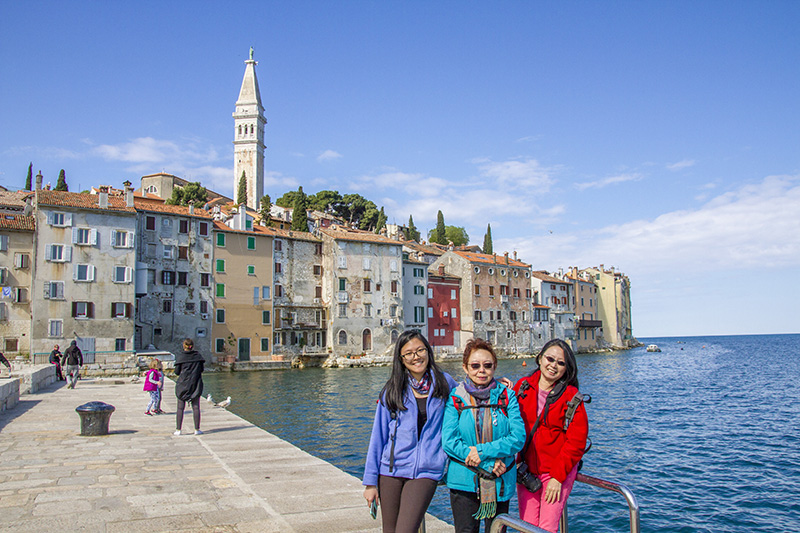 From Rovinj to the border of Slovenia was about 67 km and it took us just 50 minutes to arrive at the border. The crossing was very smooth, we got our passports stamped when exiting Croatia and in less than another 100 metres our passports were stamped for entering Slovenia. The queues of cars getting into Slovenia were short but those going the opposite way were very long. I tried to show our car-border-crossing-permit to the Slovenia customer officer but he just waved us through, not interested to inspect the permit.

Just after the border we stopped at the first petrol kiosk to buy a vignette (a valid sticker) which would allow our car on Slovenia motorway. One vignette was for 7 consecutive days and costed €15. There was no 1-day – vignette. If a motorist was caught driving without a valid sticker or without paying toll there would be a hefty fine of  EUR 300 to 800. Since we would be in Slovenia for three days we thought it would be more convenient to get a vignette. 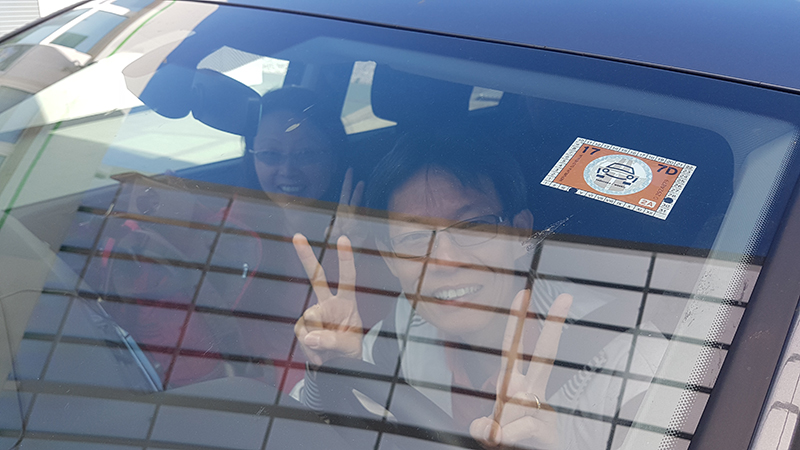 From the Slovenia border to Skocjan Caves was about 48 km which took about 45 minutes of driving. We parked our car at a huge carpark and walked over to a one storey building to buy our entry tickets into the caves. Skocjan caves could be explored via two routes. One route was mainly in the cave area whereas the other route started from an outdoor path following the Reka river before ending into the cave. This second route was not available due to some on going maintenance work. Both these two routes were guided routes. 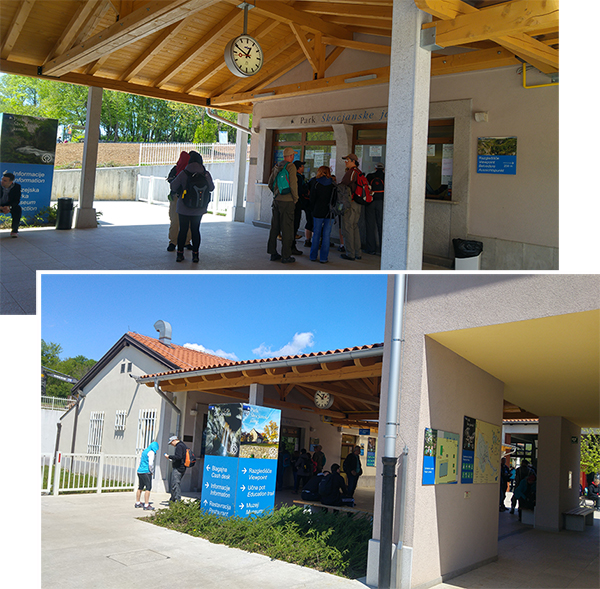 The guided tour ran at interval of 1 to 2 hours depending on the season. We arrived just in time for the 1 pm guided tour. In my planning I did not take into consideration any delay at the custom. It was lucky that we were not caught in any traffic jam when crossing the border, if we had missed the 1 pm guided tour we would have to wait till 3.30 pm for the next guided tour.

At exactly 1 pm, two female guides gathered all the visitors and walked us across the car park, along a road, through a field to another building. This building housed the entrance to the cave. The group was divided into two groups as one guide briefed in English the other in Slovenian. 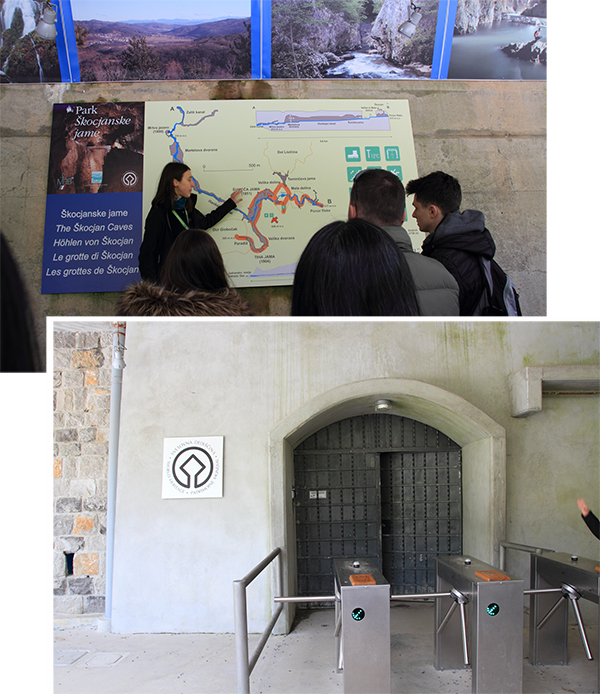 The  Skocjan caves were limestone caves and like many limestone caves they were full of stalactites, stalagmites, columns, helictites, flowstones etc. I visited Skocjan caves not for any of these but for their deep gorges/canyons and a thunderous river that flowed through them. I was certainly not disappointed. 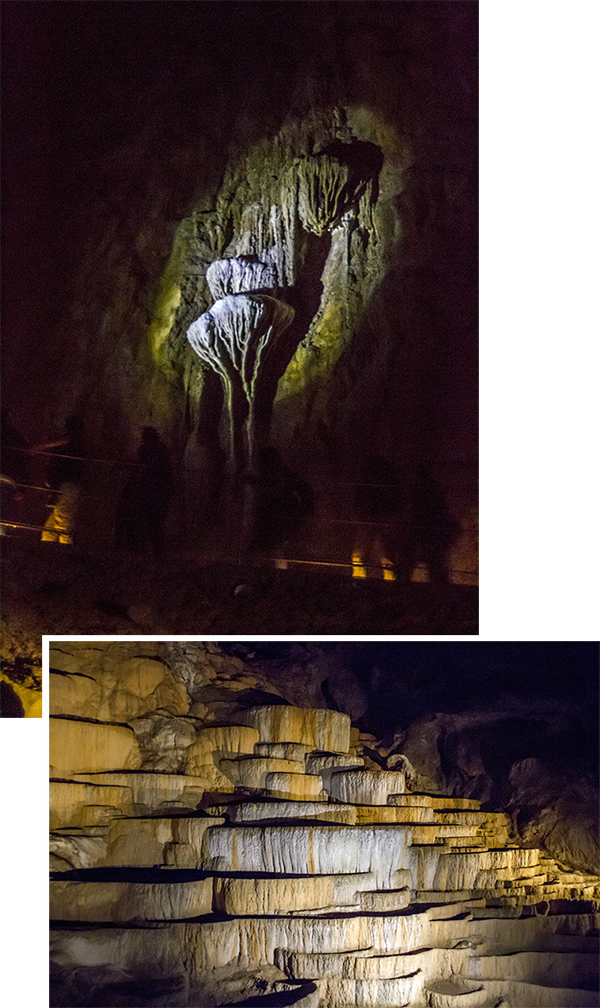 The gorges in the cave were a gigantic wonder. The cave river was huge and forceful and a massive volume of water rushed through the caves at the bottom of the gorges. I felt so minute and insignificant as I walked carefully along a man-made, long, curvy and continuous path that was carved into the steep sides of the enormous gorges in the opposite direction of the water flow. It felt as though we on a “Journey to the center of the Earth”. 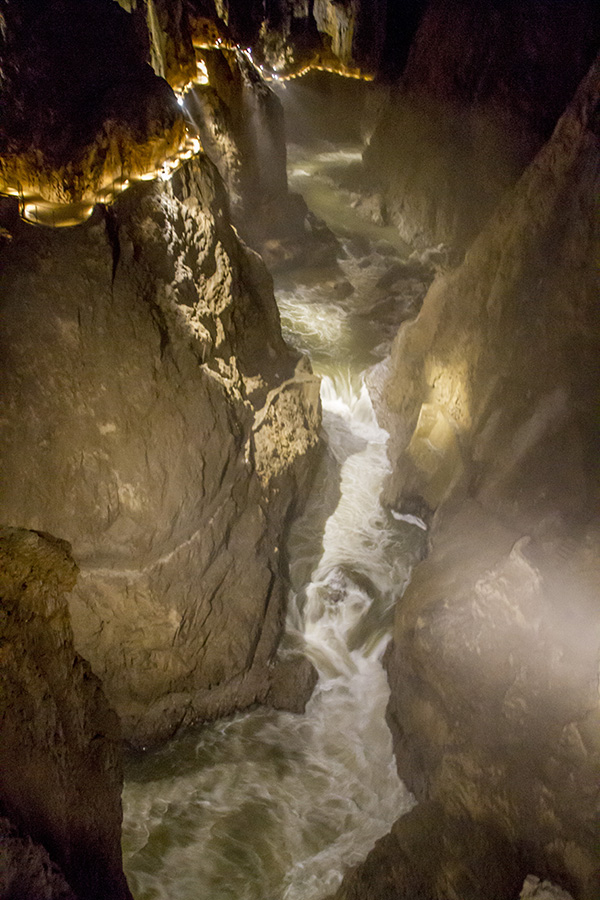 Our guide told us that Reka river, a 54 km long river, started in Croatia and flowed through western Slovenia. At Skocjan, Reka river disappeared underground flowing through Skocjan Caves. For the next 38 km it flowed underneath the ground of the Slovenian Karst before it appeared as part to Timavo river in Italy. 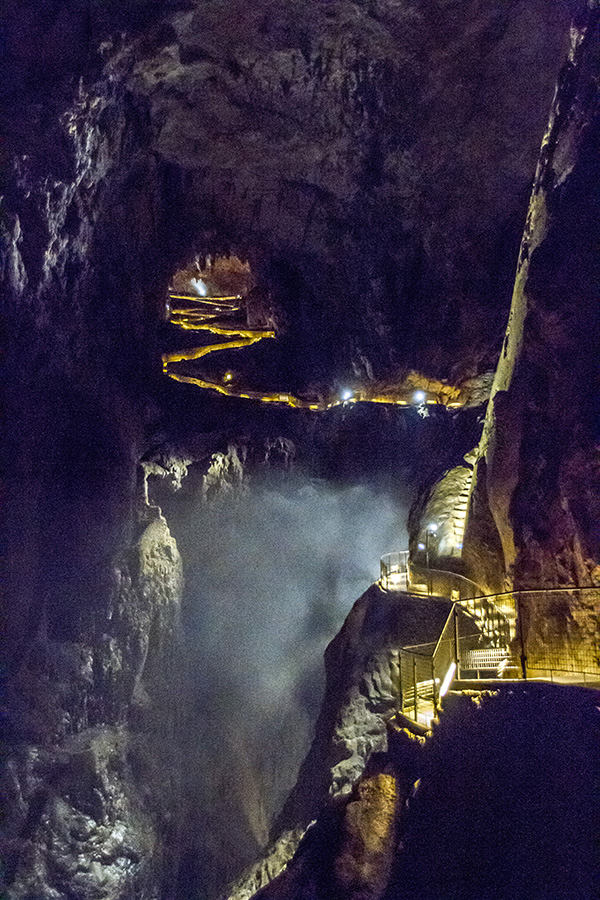 The paths in the Skocjan caves were very well maintained. Our guide would switch on the light that lit up our path ahead as we entered one cavern and would switch off the light once we moved on. So it was essential that we did not fall too far off behind her. We entered one particular cavern with a deep gorge and a bridge that spanned across it. Standing at midsection of the bridge and looking down to its black depth was an amazing experience. 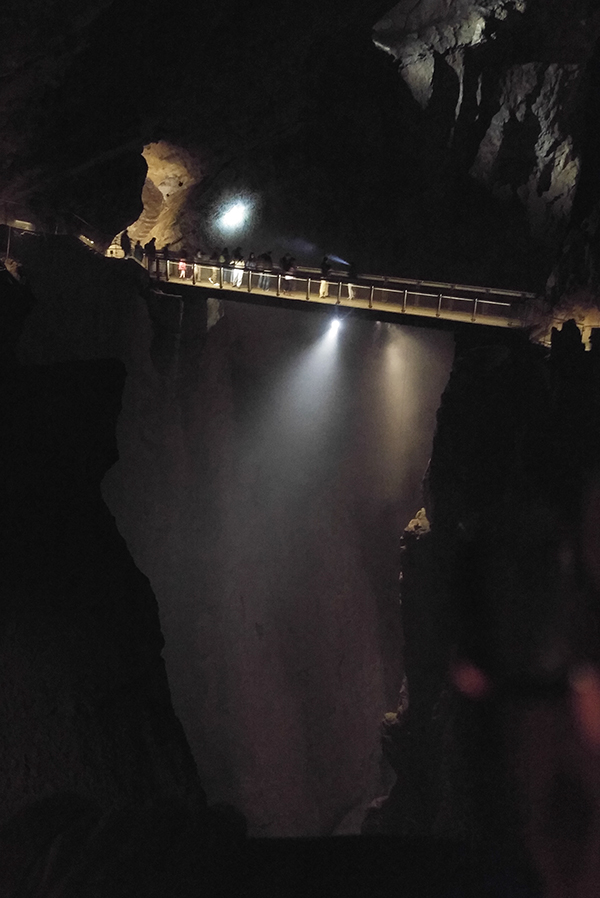 Finally after about one and the half hour we reached a huge opening. We had arrived at the caves entrance or exit! It was huge, sunlight was streaming in and we could see a green dense “forest” just outside the entrance. 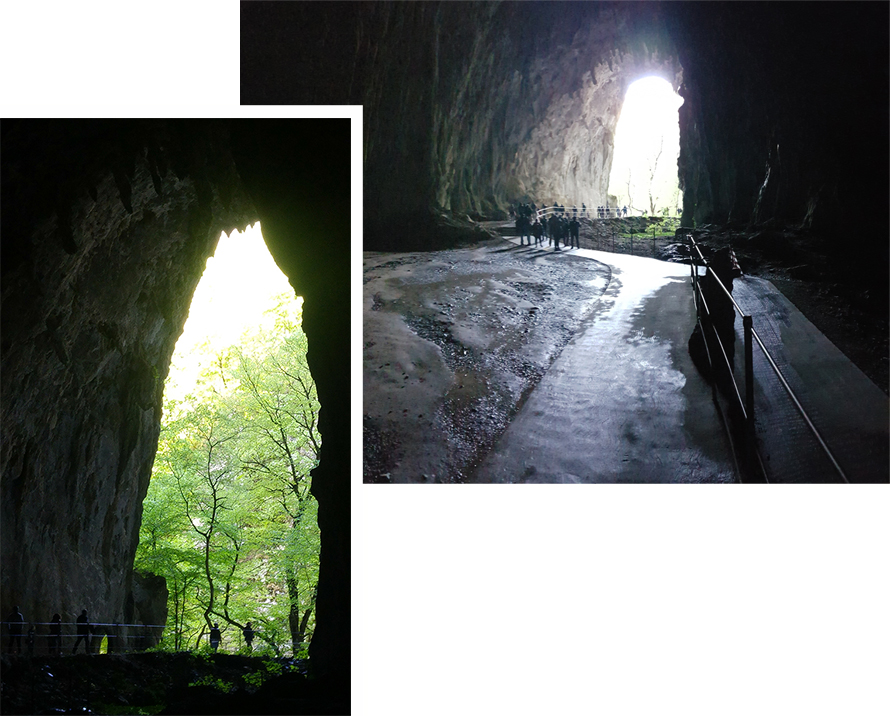 The cave entrance was at the base of a humongous gorge/hole. This hole was the Big Collapse Doline which was a gigantic collapse of the ground. When did the collapse happened we did not managed to find out from the guides. It probably took place centuries ago and its present look probably evolved through the years. 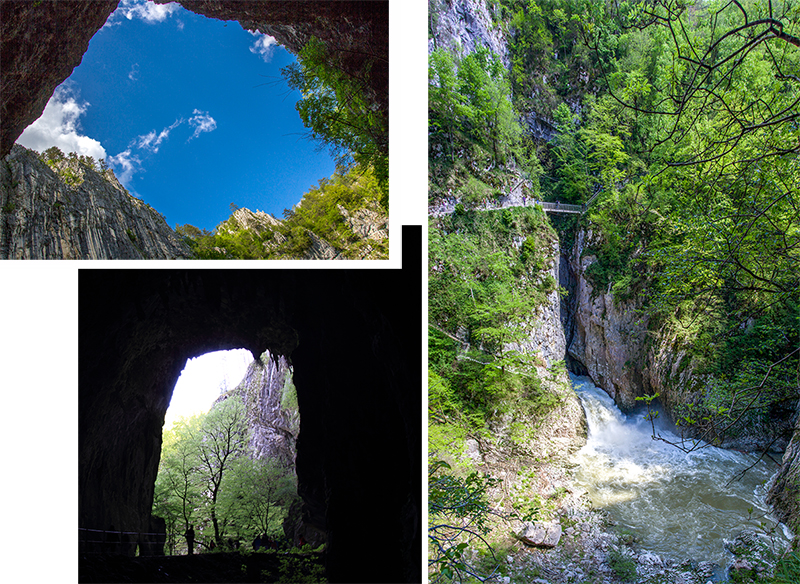 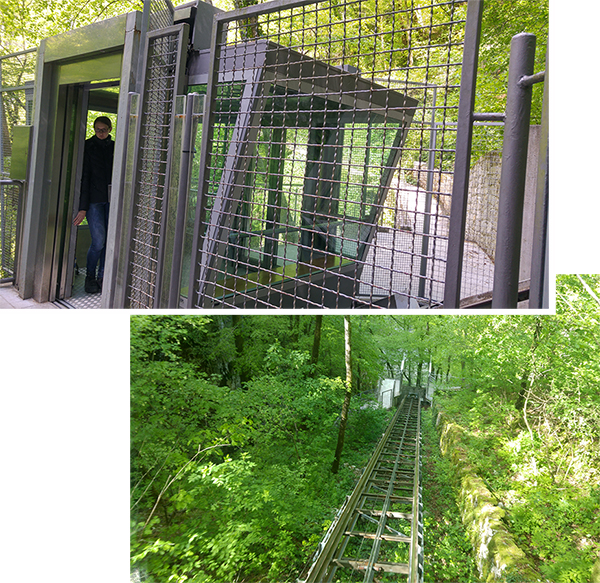 From the top of the lift we made our way to our car. It was about 2.40 pm when we drove out of Skocjan Caves carpark and continued our journey north to Bled Lake.

I enjoyed the walk though the Skocjan caves but Yat Thong and Lin Ying did not find it enjoyable, I believed they did not enjoy it because they  did not take as many photos as I did. At the start of the walk our guide told us that photography was not allowed in the caves so I hung back and like many people at the end of the queue we were taking photo discreetly.

Skocjan Caves to Bled Lake was about 126 km and took about 1.5 hour. We arrived at Bled town at about 4.10 pm and drove straight to our accommodation, an AirBnB place. Once we settled our bags we drove down to the lake which was only 700 metres away. Wow, the lake certainly looked romantic. In the middle of the Bled Lake was a beautiful castle. Actually the building was not a castle but a church dedicated to the Assumption of Mary. 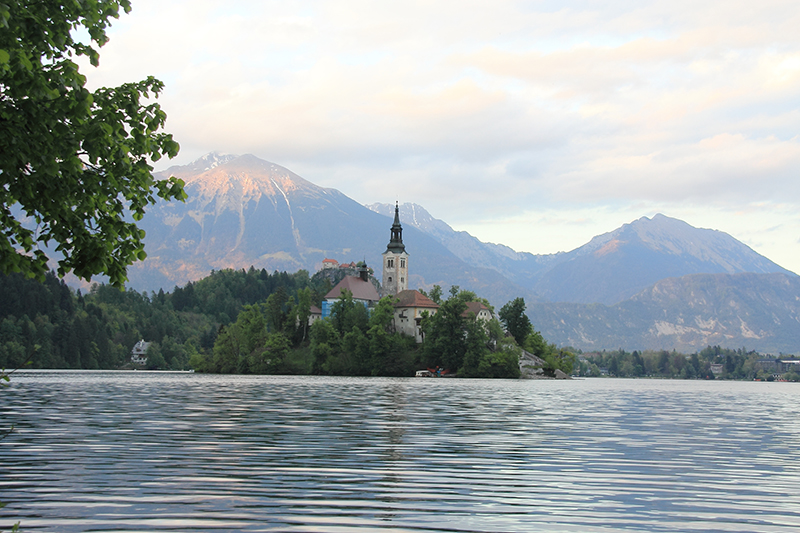 Church on an island in the middle of the lake

From the lake we could also see a castle, Bled castle (Blejski Grad). It was seated on high ground on the north side of the lake, perched atop a steep cliff rising 130 metres above the beautiful Lake Bled. 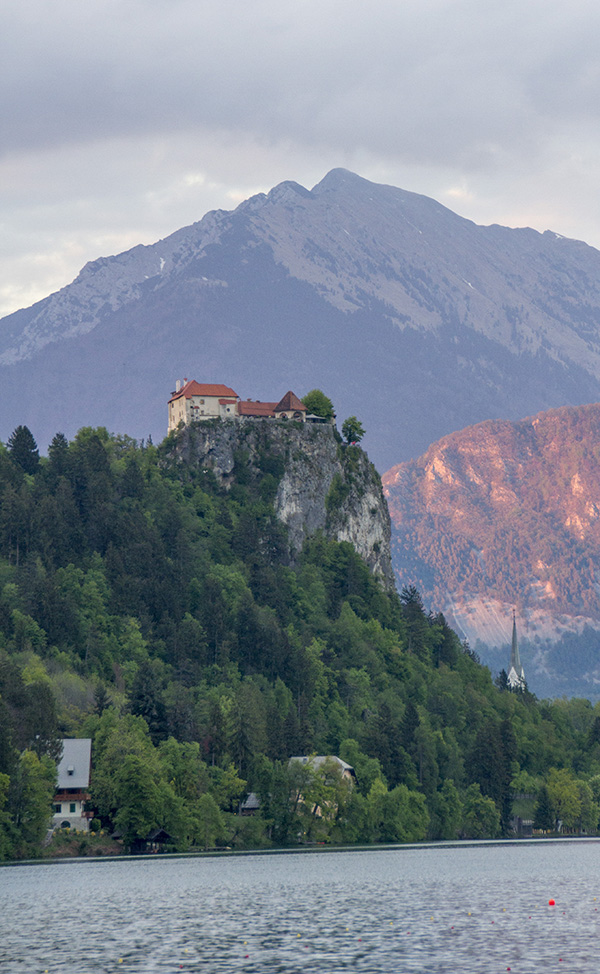 We drove to the north east side of the lake and found a restaurant by the lake and went in for dinner. We ordered four meals and four cafe lattes and the total bill came up to €34 (SGD$51). It was an Italian style meals with Croatian Cheese. 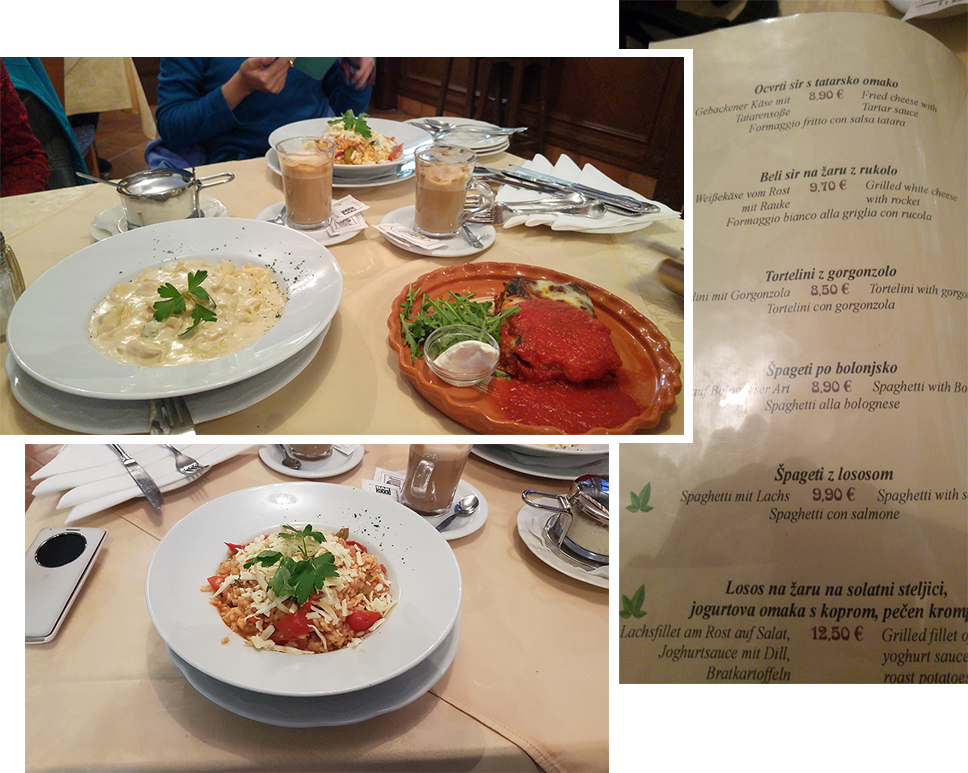 Our accommodation at Apartments Krivec consisted of two bedrooms each with its own attached toilet. In between the two bedrooms was a walkway that also served as a small private kitchen. Our accommodation was on the ground level of a three storey white house. The owner was Stane a 60+ years old Slovenia man. Stane had a very lovely house. 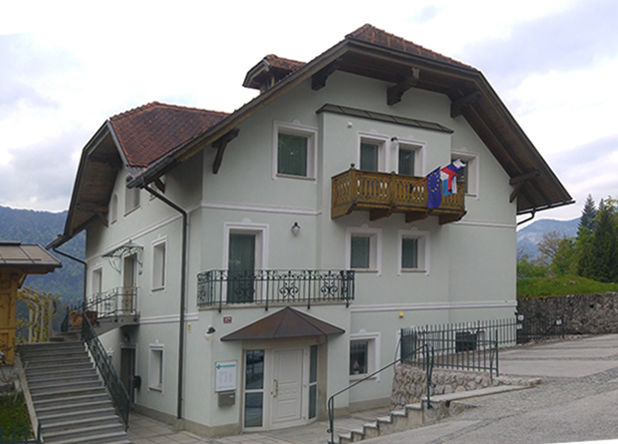 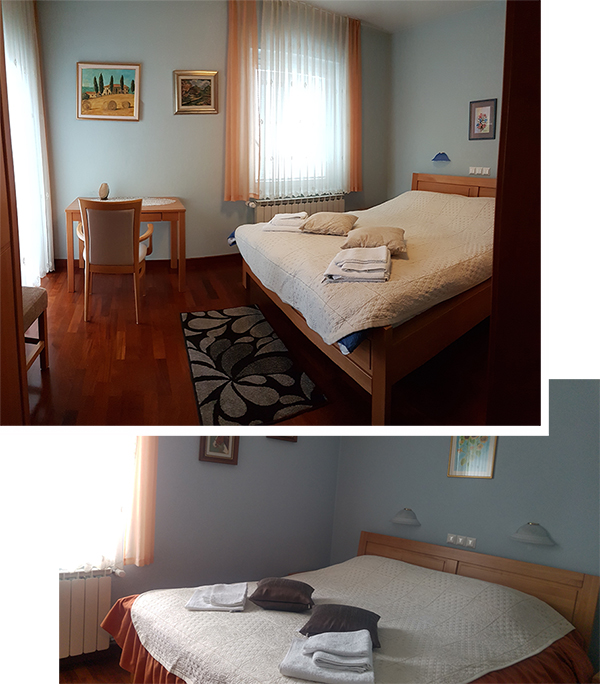 Our two bedrooms at Lake Bled

I had chosen Apartments Krivec because of its proximity to Lake Bled, though it was expensive it seemed to be more value for money as compared to the other accommodations in the vicinity.  I booked Stane’s house through Airbnb and lucky for us we were able to get a Airbnb referral discount of SGD$50 (€35 ) by using my daughter’s newly created Airbnb account.  So for two nights at Stane’s house the cost came up to SGD$350 (€225) minus SGD$50 (€35). 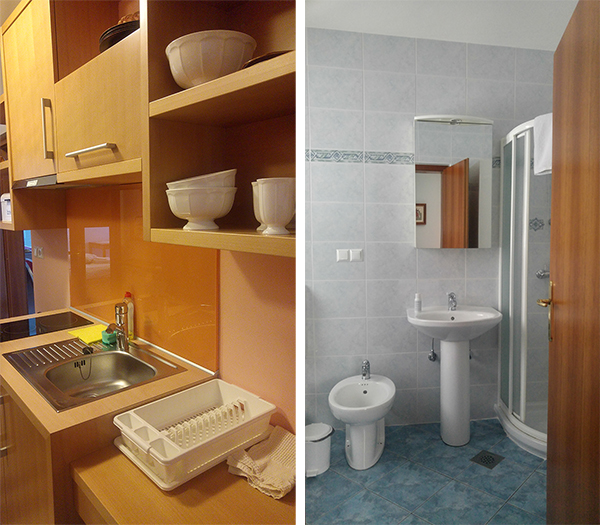 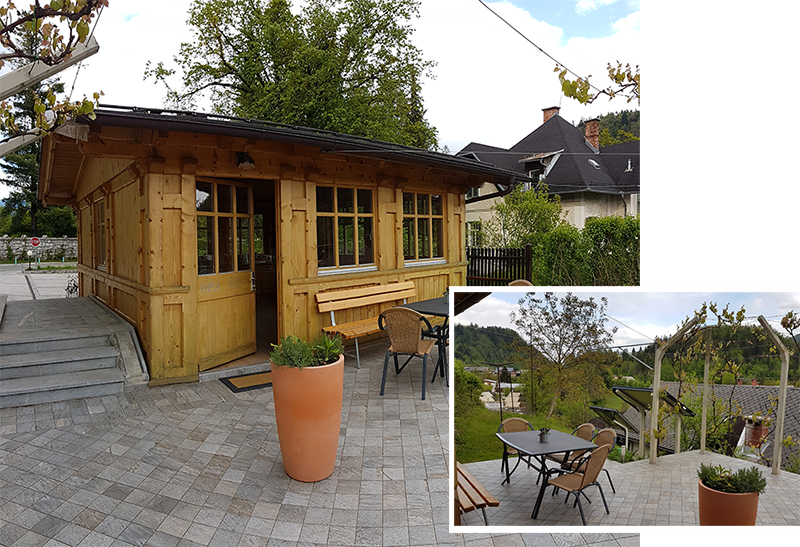 The common kitchen (for guests only) was large and lovely. It was a full size kitchen with everything. It had stove, sink, dish washer, dining table with a chandelier, sofa, fire place and its own toilet. What a lovely place. I was definitely going to cook some meals in this kitchen. 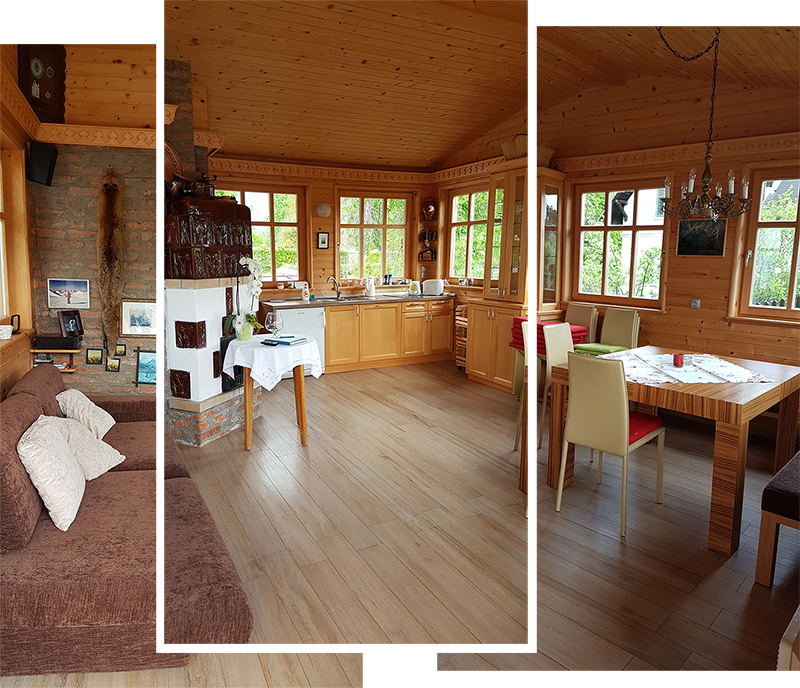