We intended to be down at shore of Lake Bled before sunrise. At about 10 am we would move on to visit Vintgar gorge which was about 6 km from Bled and in the afternoon we would drive west to Bohinj Lake before returning to Bled for the night. 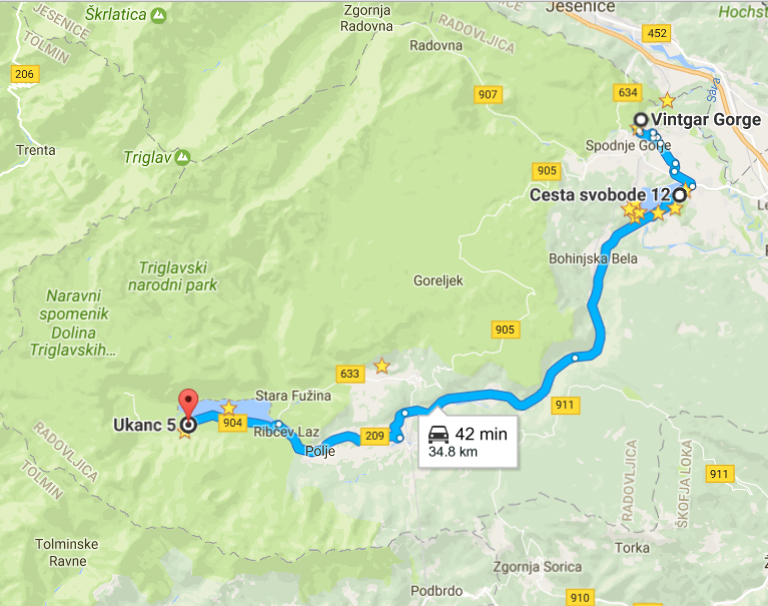 We caught the stunning sunrise over Lake Bled on the shore of the lake. It was magical unfortunately if was over in too short a time. We wanted more so we trekked up to a high observatory deck to view Lake Bled from the top. As for Vintgar Gorge we arrived at the gorge at noon, two hours later than planned. We cut short our stay at the gorge so that we would have more time at Lake Bohinj. Regretfully,  lake Bohinj was a huge a disappointment.

We woke up at 5.30 am and reached the lake by 6.00 am. The sky had already brightened up but the sun was still behind the mountain ranges. We waited and finally the sun made an appearance. It was very lovely and it took my breath away. 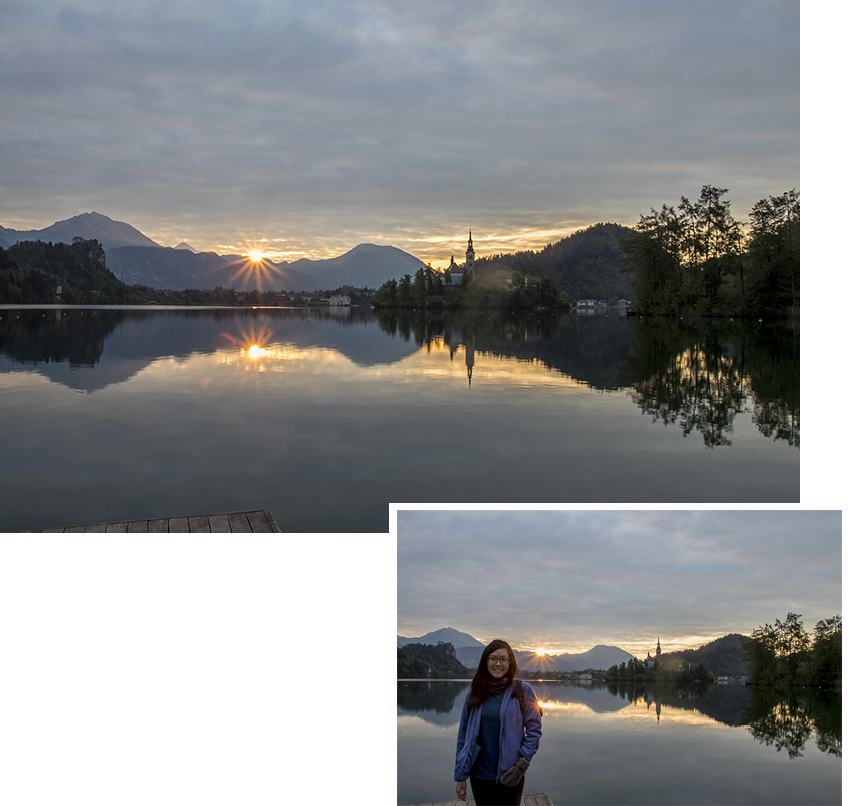 Last night and this morning we had viewed Lake Bled from the water level height and the sight was very stunning. This morning we intended to trek up to the observatory deck somewhere up the hill to view the lake from top down. 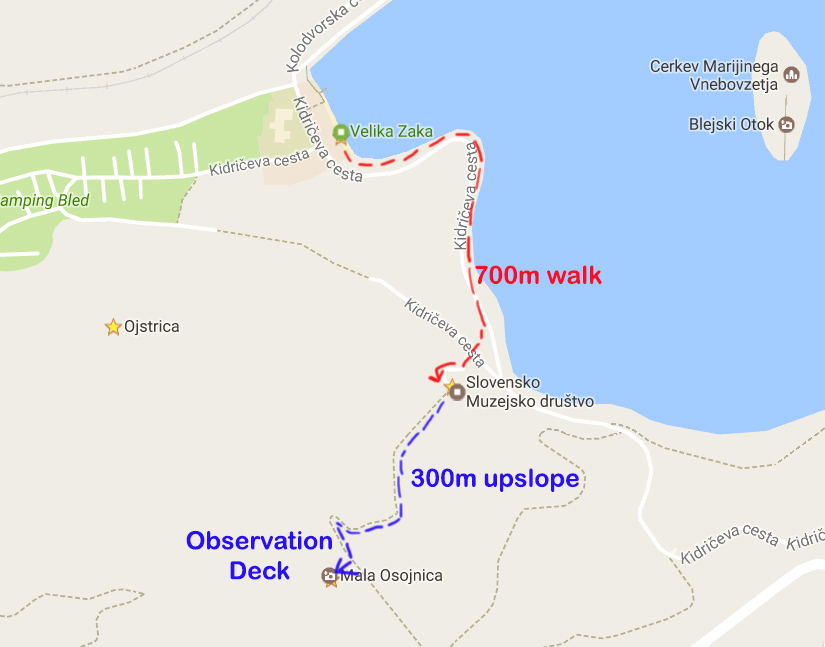 Route to the observatory deck

From the map the distance to the observatory did not seem too long, 700 metres on flat land and another 300 metres up the slope.

Stane had told us that we would need good trekking shoes to go up the slope. Little did I know the implication of such a statement until we were trekking uphill.

The path was very uneven, full of exposed roots, at times the inclination was very steep and full of obstacles. To walk this path a good pair of trekking shoes was not the only thing that was needed. It needed a lot of energy! It was a good thing that my 77 years old mum had stayed behind at the lake shore. 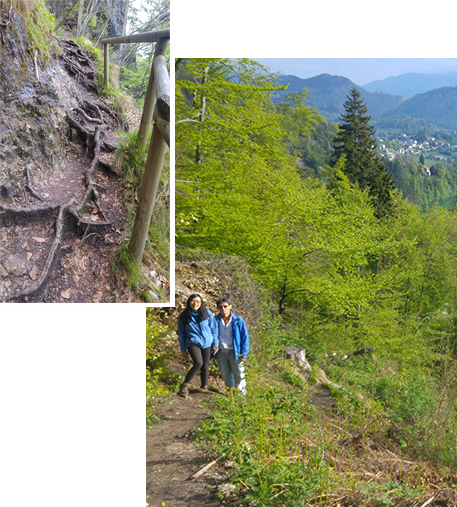 Trekking up the uneven path to the observation deck

The uphill path on the map looked so straight forward, but we seemed to be walking “forever” zigzagging up the slope. After 20 minutes of slope trekking we still had yet to reach the top. By then the trees had spaced out and we were high enough to see the Bled Lake and its island. We stopped to enjoy the view, it was very lovely. We could see the Bled island in the middle of the lake. At this high view point we could see the entire Bled island and the water body that encircled it. The scene was so romantic… so beautiful. 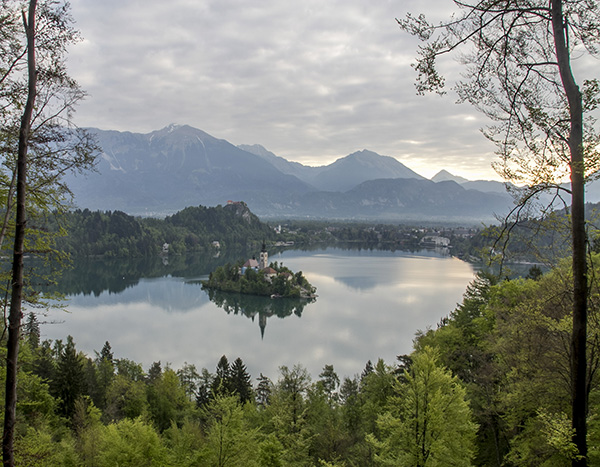 After a short break we continued our journey up to the observatory deck. It was a shame that along this trail there was no direction indicators or “distance” signboards. We could only assume that we were still on the right track but for how long more we did not know. 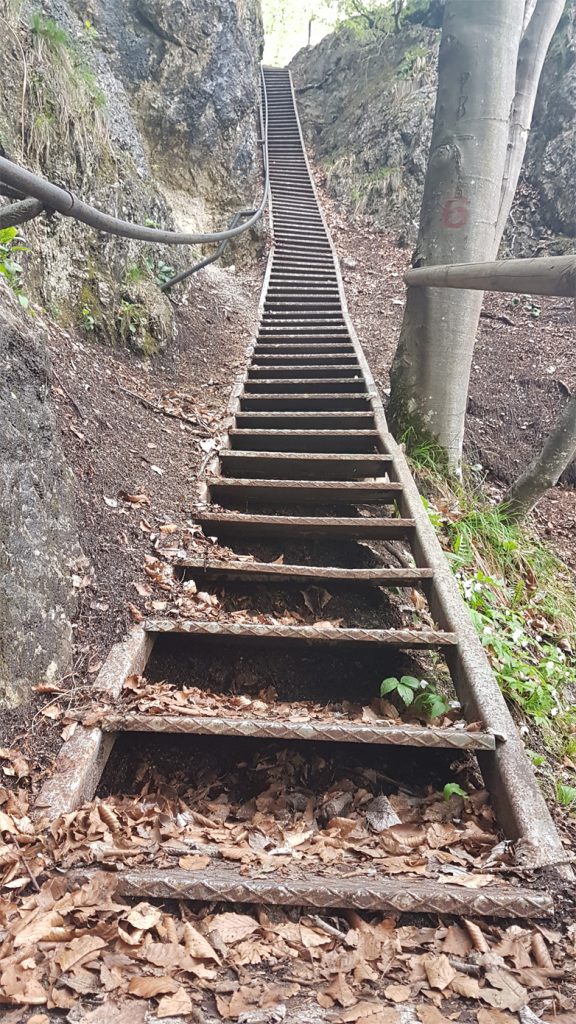 Though we were hot, tired and felt like stopping our upward trekking, but there was still this nagging feeling that we must go all the way up to the observatory!!

A 300 m trek should take only 20 minutes and we had already trekked for more than 20 minutes, so we should be very near the observatory deck. That was the thought that drove us onward. It was disappointing to turn the corner or trek up to a high landing and found that the observatory deck was still out of sight!

We met a young couple from Hong Kong, they too were hot and were drenched with perspiration. We stopped to exchange greeting and complaints about this long endless trek to the observatory deck. They soon overtook us. After another 10 minutes we came to this crazily long wooden staircase and could only hope that the observatory was somewhere just at the top of stair.

Yes! Finally we reached the observatory deck and flumped our weary bodies on a long chair, propped up our tired legs and stared at the Bled island for a long long time. Though the sky was not fabulously blue the view in front was worth all our efforts getting here. 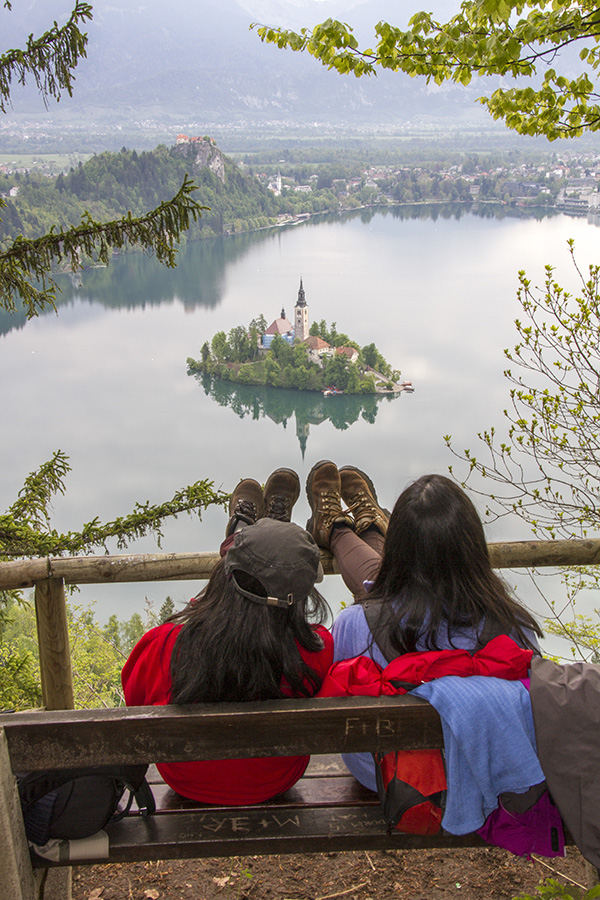 From the observatory deck, there were still steps that led further up slope.  The Hong Kong couple proceeded up the stair as they thought it might led up to a road that went into town. After half an hour they came back down and told us that they could not find the road. We had not move much from our position since half an hour ago. We were fully satisfy with this high view point of Lake Bled and did not have the urge to seek out another high view point. 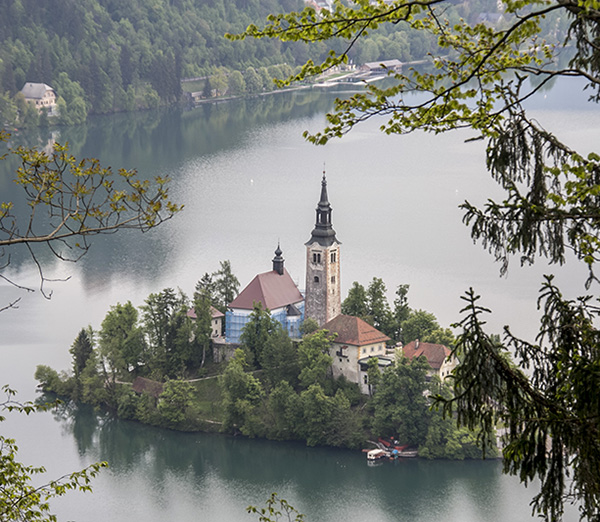 A zoom in to Bled island from the observatory deck

By 9.30 am we were back at our Airbnb stay, Stane’s house. We were back at his guest-shared kitchen. Since we were his only guests, we got the whole kitchen to ourselves. It was a pleasure to cook breakfast in such a lovely kitchen. For breakfast we had fried eggs with fresh mushrooms and cheese, bacon, lettuce, strawberry, wraps and bread. 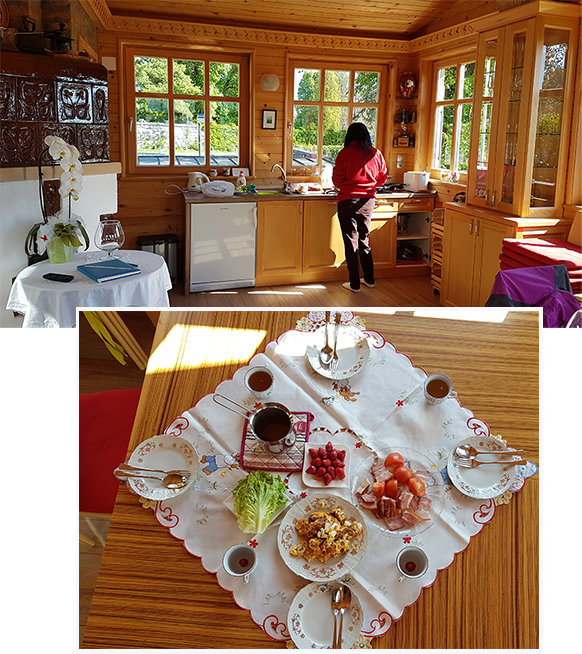 From our Airbnb Stay to Vintgar Gorge was 6 km. W reached Vintgar Gorge near to noon and was very surprised that the roads leading to the gorge entrance were packed with cars. 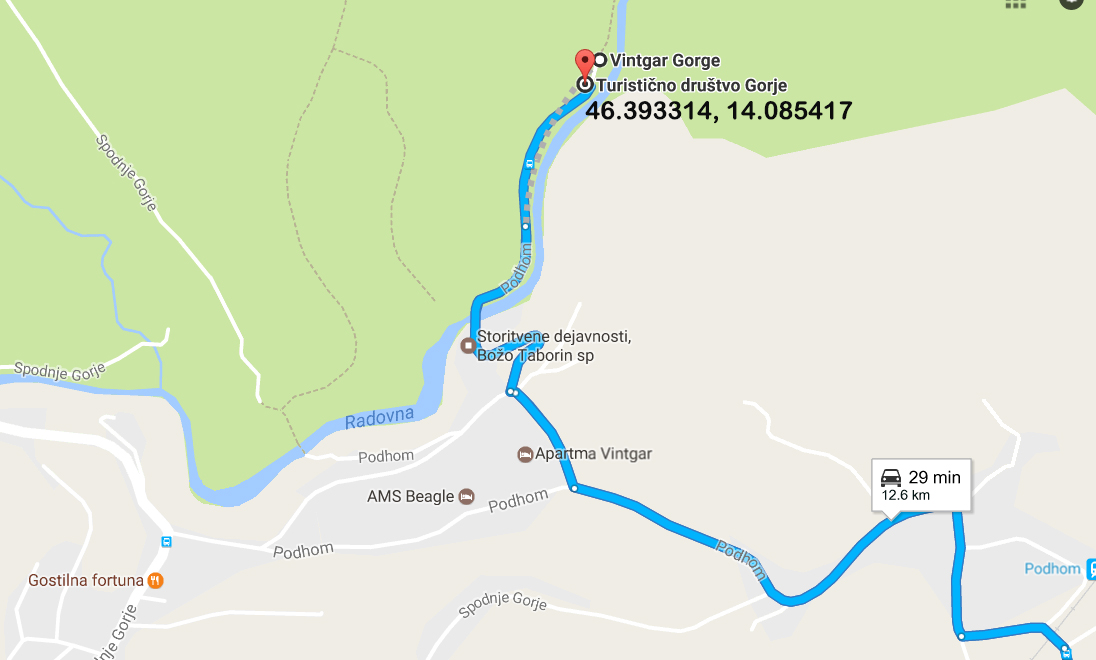 As we drove nearer to the entrance we found cars parked indiscriminately along the two sides of the road. We were worried that if we drove inner into the road we might not find any more empty lots. Luckily the road ended at a huge car park and there were still several empty lots.

From the carpark we walked toward the direction of the entrance but long before we reached it we saw a long queue of visitors! We had to queue for more than 30 minutes before we reached the ticketing counter and bought our admission tickets into the gorge. The tickets costed €19 (€5 for adult and €4 for university student) for four of us. 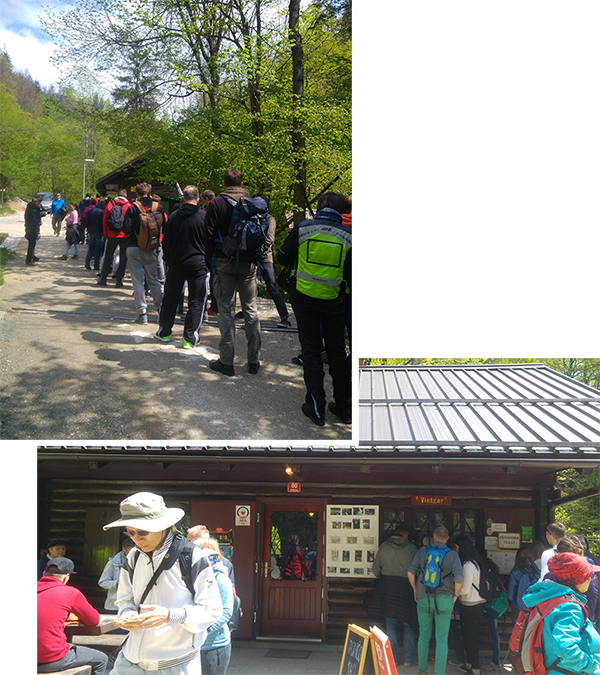 Long queue to the entrance of Vintgar Gorge

Along the gorge was a 1.6 km long wooden boardwalk. It was built into the sides of the gorge near to the water level. It followed the Vintgar gorge and crisscrossed the Radovna River several times over rapids, waterfalls and pools. 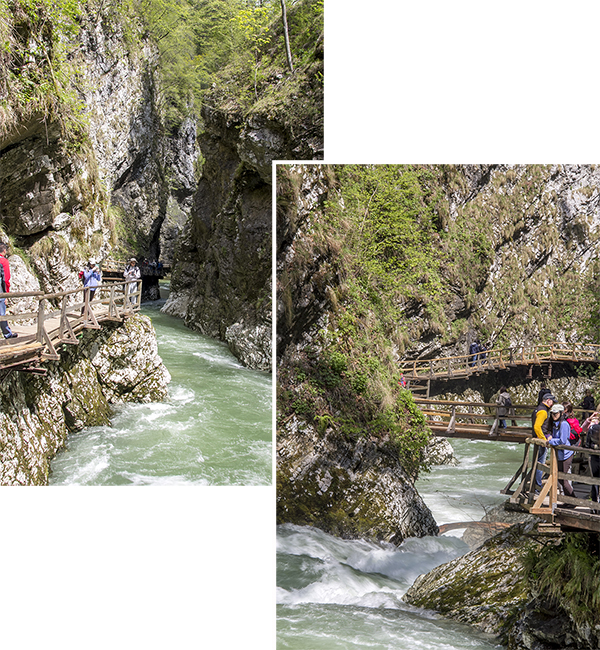 Vintgar Gorge was very beautiful. The gorge curved in and out and the rushing water was very mesmerising. There were many people at this time of the day and it was not easy to take photos with so many people around. I loved the considerations that went into the design and construction of the boardwalk which allowed visitors to “trek” safely into the valley of the gorge. The boardwalk followed the zig zag curve of the gorge, at times the gorge was pretty wide and yet other times it narrowed down to less than 10 meter wide. 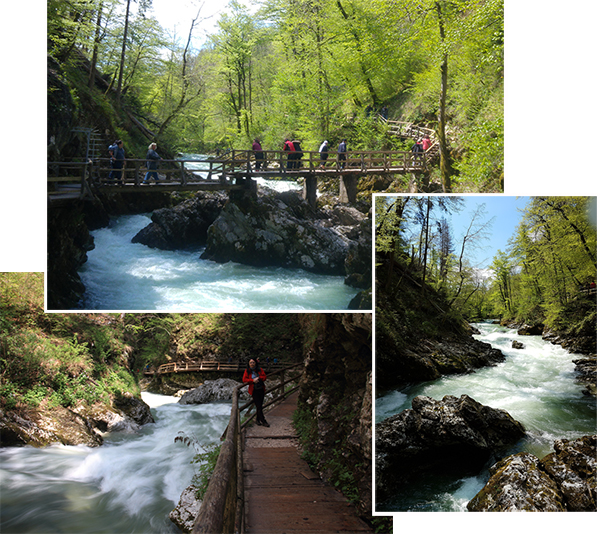 From Vintgar Gorge to Bohinj Lake was about 35 km and took us 45 minutes to arrive at the lake. We intended to view the Bohinj Lake from the top station of the cable car so we drove directly to the lower station. Along the way our car passed the lake and it looked rather ordinary. 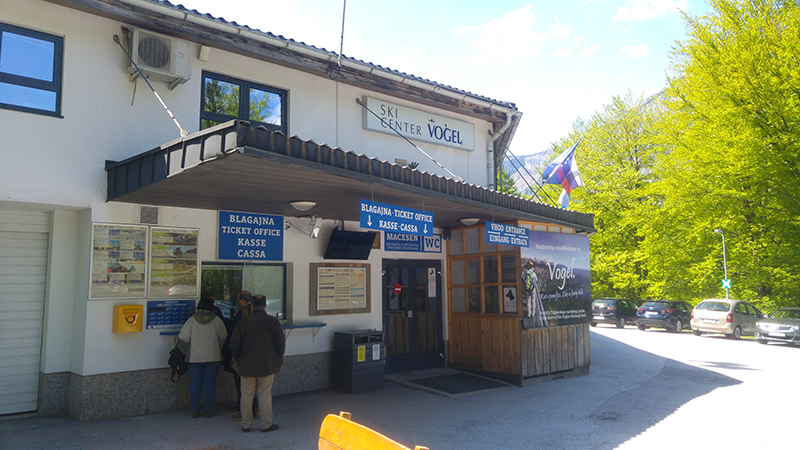 We bought our return tickets for €54 (€13.50 per person) for 4, this time there was no discount for student. So Lin Ying’s university card was of no use her. The cable car ride took only 10 minutes. 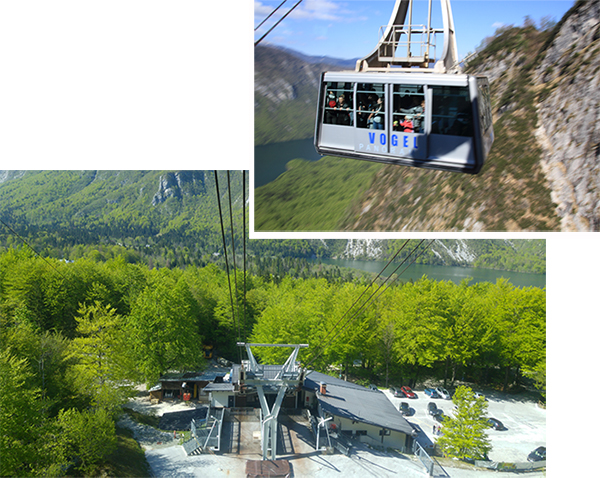 The cable car ended in a building that housed a cafe. On the outdoor deck of the cafe we could see the mountains of South Bohinj Range. From the top cable car station there was a chairlift that would bring visitors to Orlove Glave. Unfortunately the chairlift did not operate in April so we could not go further up. We stayed in the cafe, drank our hot drinks and enjoyed the view. 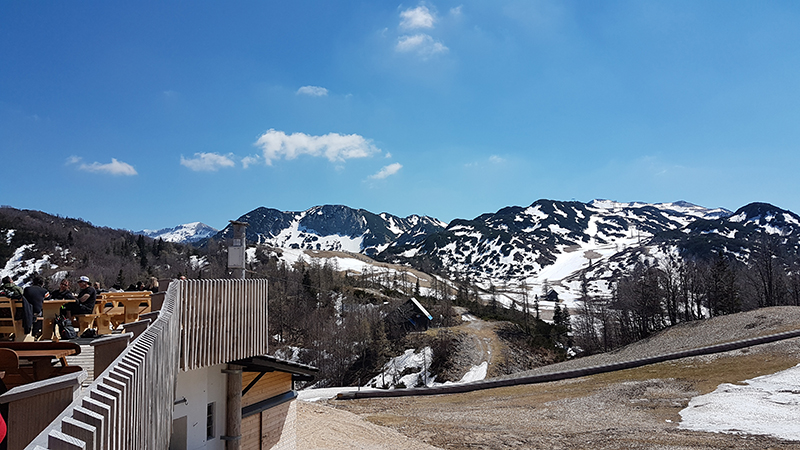 Bohinj Lake was suppose to be very stunning, but we found it rather ordinary and plain. Nothing spectacular. From the cable car we were able to see the entire lake. It did not look spectacular from the top or from the bottom. 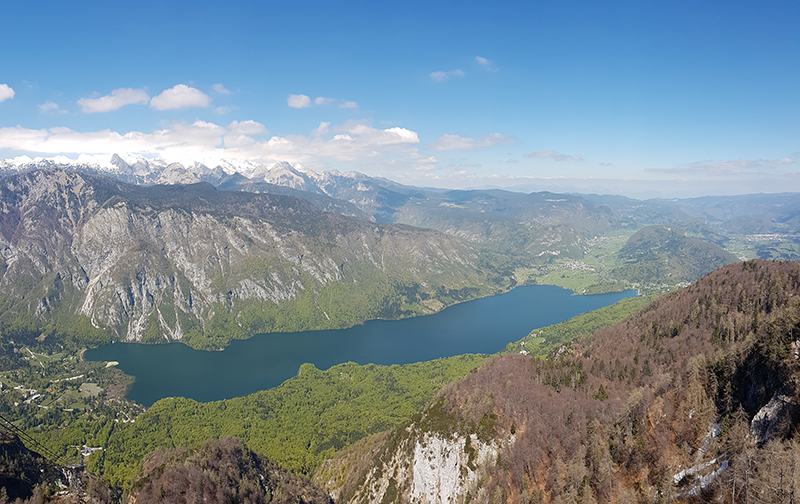 Lake Bohinj as seen from the upper cable car station

We cooked our second meal at the guest kitchen. The seasoned chicken meat that I bought from the supermarket was horrid. It was terribly salty. From now on, no more seasoned-meat for us! 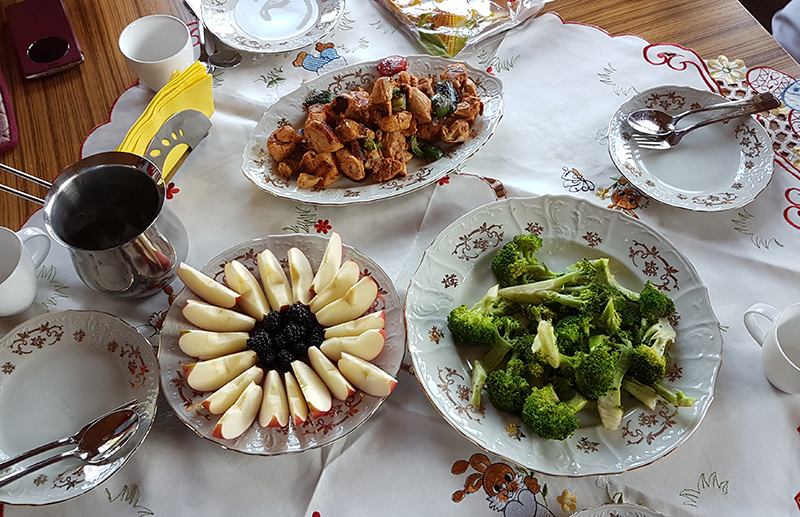 Late night visit at the Lake

We drove down to our favourite place at the shore by the lake again. The sun had just set, the sky was turning blue and the night lights were coming on. It was such a quiet night that even the lake water was very “quiet” too. 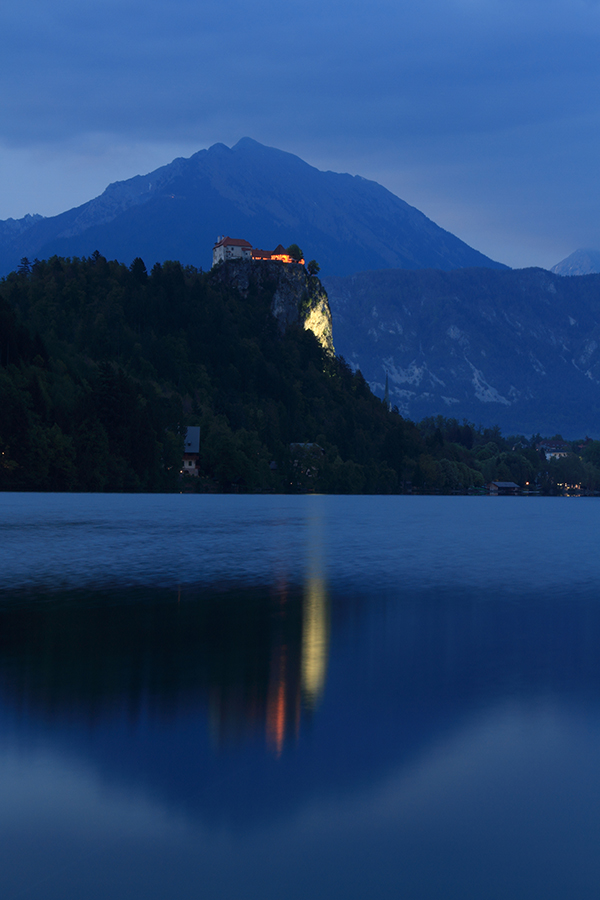 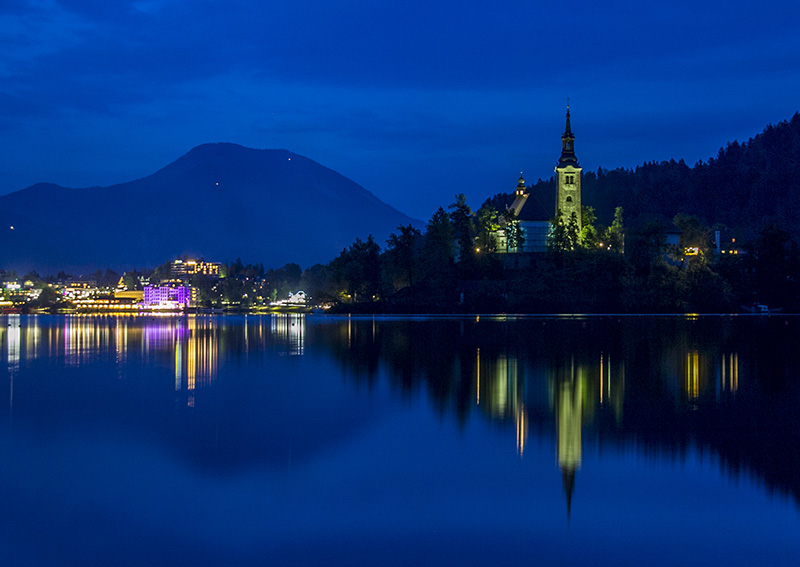