Plan for the four days in sicily

On the first day we planned to drive to Taormina a town of the city Messina in Sicily. The entire journey would be about 433 km taking at least 5 and half hours. It would be a long and tiring drive. On the fourth hour we should reach the port “Villa San Giovanni” where we would board a car ferry for a 10 to 15 minutes trip to Messina Port over at Sicily side. From there it would be an 1.5 hour drive to Taormina. We hoped to reach Taormina by about 5 pm which should leave us some time to explore the place. 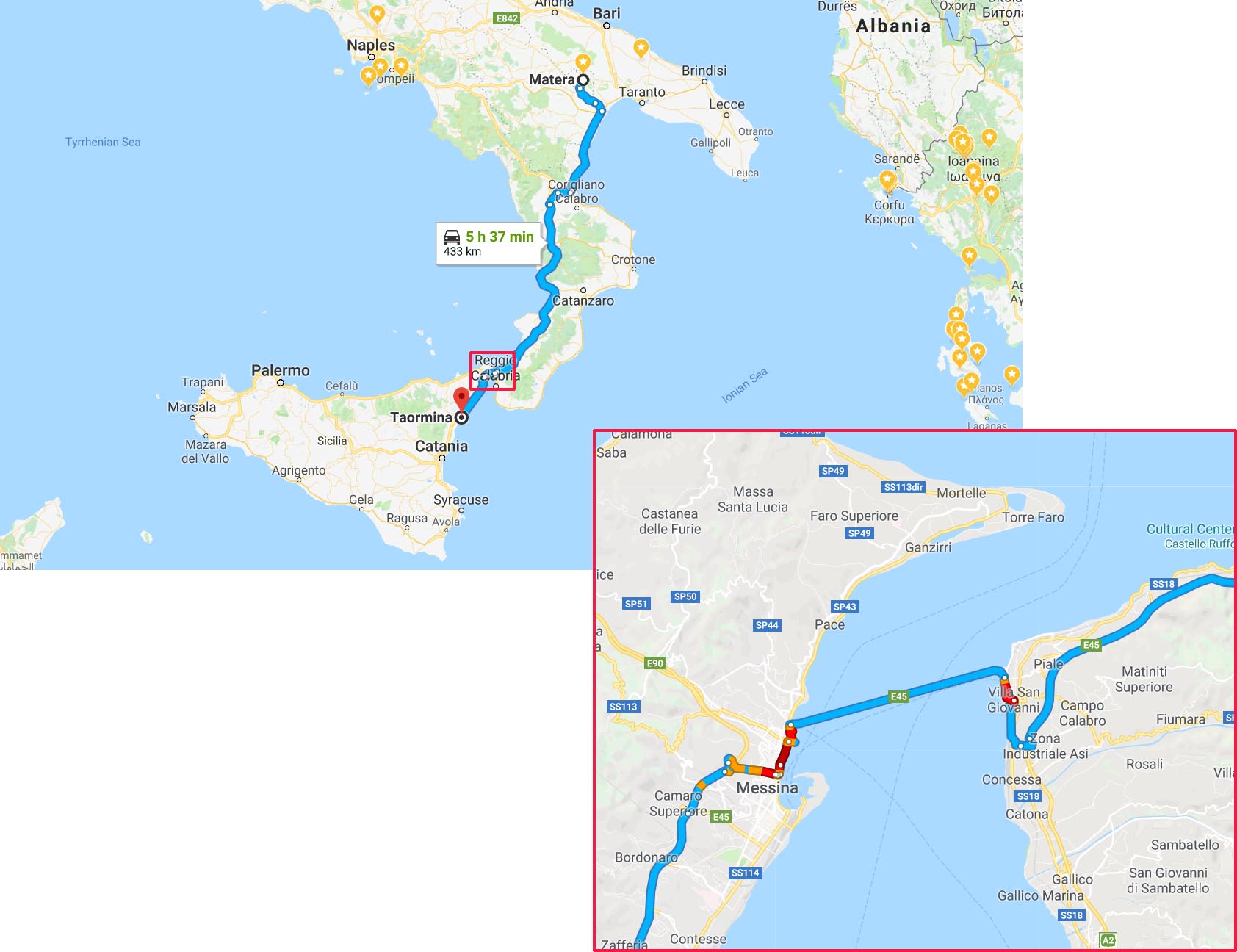 On the second day we planned to drive to the island of Ortigia, which was considered as the historic center of Syracuse. On the third day would be a drive on to Agrigento where the “Valley of the Temples” were located and on the 4th day we would visit “Greek temple and ancient theater of Segesta” before ending in Palermo city. On the 5th day we would leave Sicily. 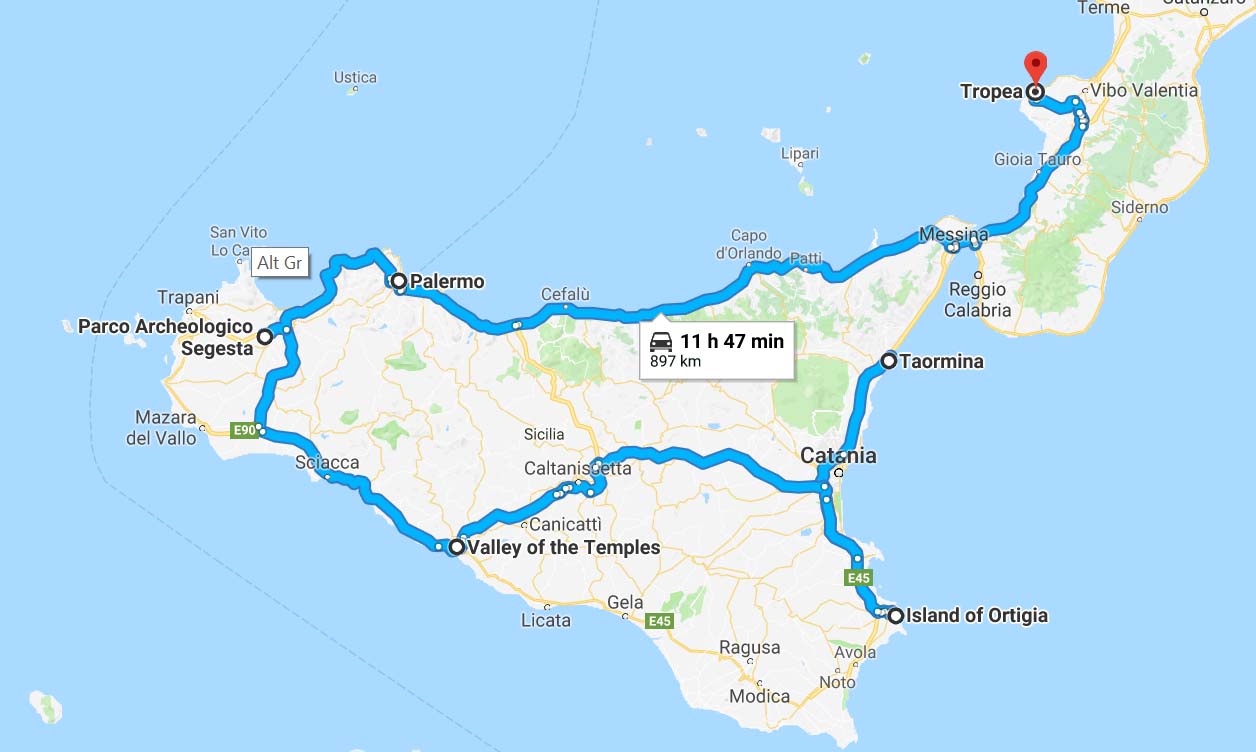 By the end of four days
Near the last moment we had a change of plan and still managed to have a wonderful time in Sicily. In our original plan it was to visit three towns/cities and three ruins. The ruins were mainly “Greek-style” as Sicily was once colonized by Greek. After our long drive to Taormina we had second thought about visiting ruins, especially Greek ruins as we had visited Greece a couple of years ago and had seen majestic Greek ruins after ruins. So by dropping the Greek ruins visits in Sicily would give us more time to visit the other towns/cities of Sicily.

At the end of the four days in Sicily we visited seven cities/towns, each having its own characteristic, each a delight to visit. There was totally no regret for dropping the ruins from our itinerary. 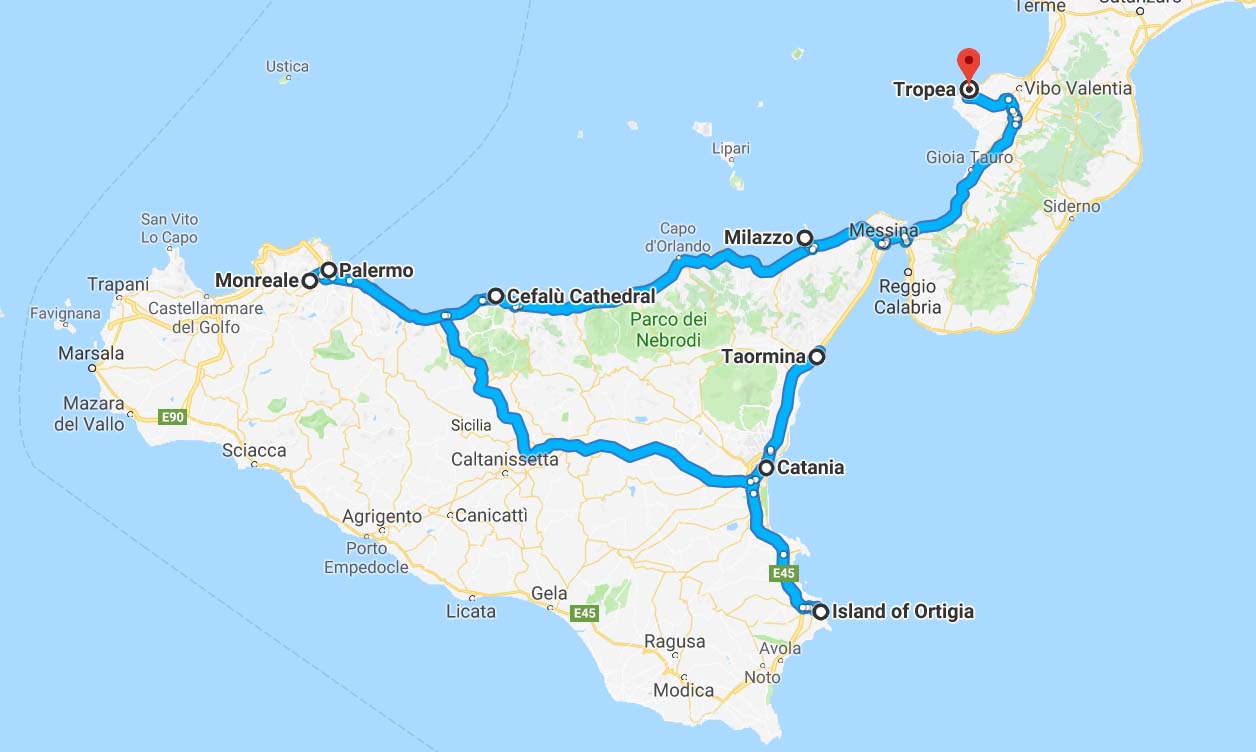 Sicily was the largest island of Italy and it was separated from the Italian mainland by the Strait of Messina. To get to Sicily we drove to the port, Villa San Giovanni, in the town of Villa San Giovanni. Both the port and the town had the same name!

At the port we missed a navigational sign and ended up at a “container/truck” lane. A truck driver signalled to us and we were back at the correct lane. We saw a ticketing booth, so Yat Thong stopped the car by the lane-side and I walked over to buy our ticket. I bought a one way ticket for a car (which include a driver) and one passenger. The cost was €38. I tried finding out if there would be saving buying a return ticket, unfortunately I had problem communicating with the staff. Anyway on checking from the internet later on, the saving was just €1 for return ticket covering more than 3 days. 1-day and 3-day return tickets had more saving. 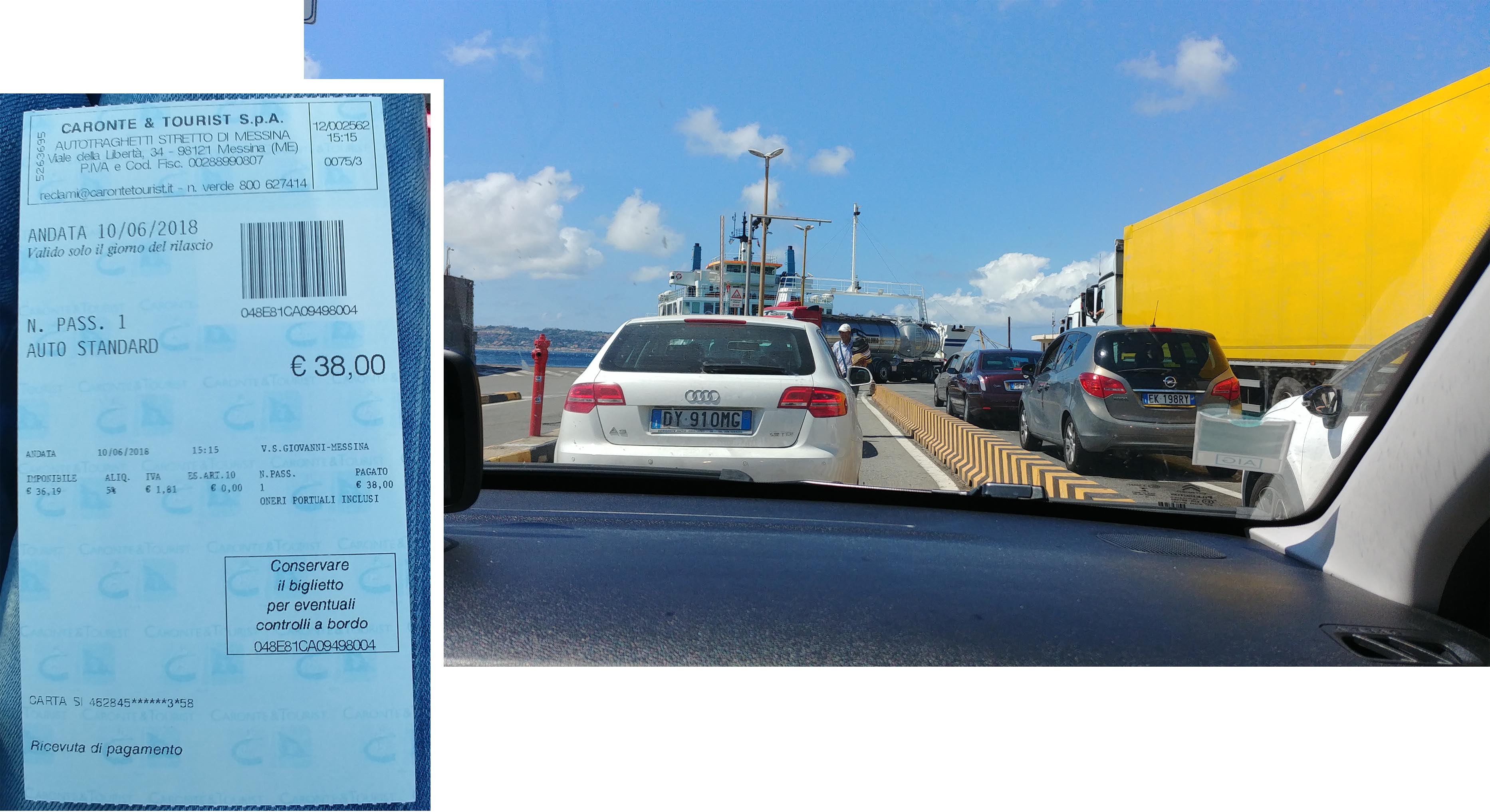 Waiting to board a car ferry to Sicily

Every day many vehicles and people crossing the Messina Straits to and from Sicily so ferry services were available 24 hours. We did not have to wait long before we were directed to board the car ferry.The car ferry had two ramps, one at each end of the ferry. Cars got in at one end at the departure port and exited on the other end at the arrival port. Which meant first in and first out. The sea journey was only 20 minutes.

On the car ferry to Sicily

Our first destination on Sicily was the town Taormina. The drive to Taormina from Messina Port was about 1 hour 20 minutes.  We took the coastal roads and we passed through Taormina beach and saw the old town perched high on a hill overlooking the beach.

At Taormina we drove straight to our “stay” on the outskirt. We had been on the road for more than 7 hours and badly needed some rest. After a good rest and a good dinner we were ready to explore Taormina old town.  Our host advised us to park at “Porta Catania Parking” as the old town was off limit to car. Porta Catania was  a multi-storey carpark built by the cliff side just below Taormina old town. 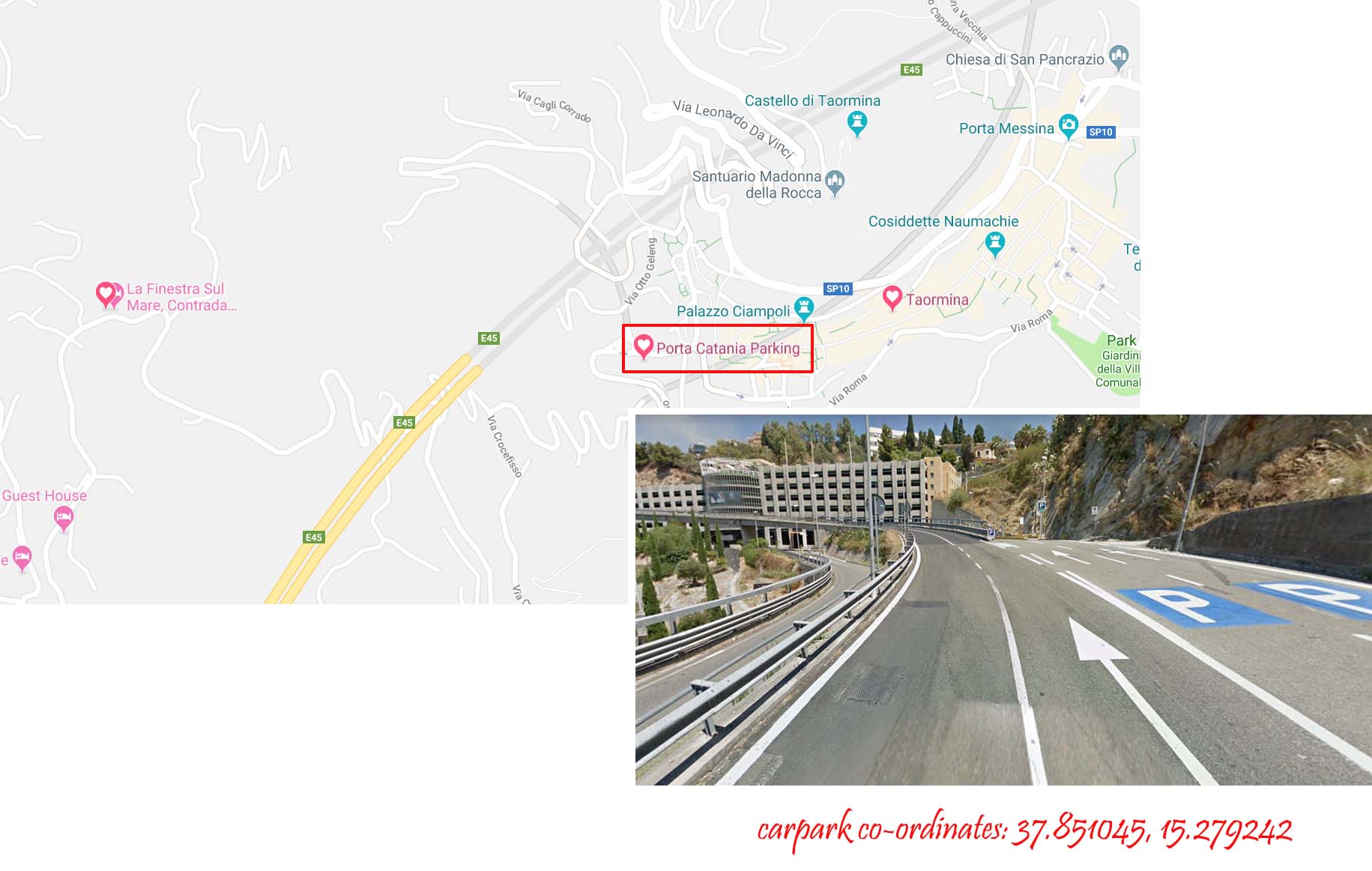 The parking charges at Porta Catania Parking was €1 for 1 hour and €6 for 2 hour. After 2 hours it was an additional €1 for every additional hour. We parked our car at level 1 and was wondering how to get to the old town when we saw elevators.  These elevators went up to the 7th level. A local sharing the same elevator as us told us that to get to the town we had to go up to the highest level. We exited the elevator at the 7th level and found ourselves in a big square.

Square after exiting the elevator at the highest floor

The square looked deserted, we walked near the edges of the square and caught some panoramic view of Taormina hillsides and its surrounding. A short walk brought us to an arch stone doorway. The arch stone doorway was the southern entrance to the old town. Unlike the square above the carpark, the town was crowded with visitors. 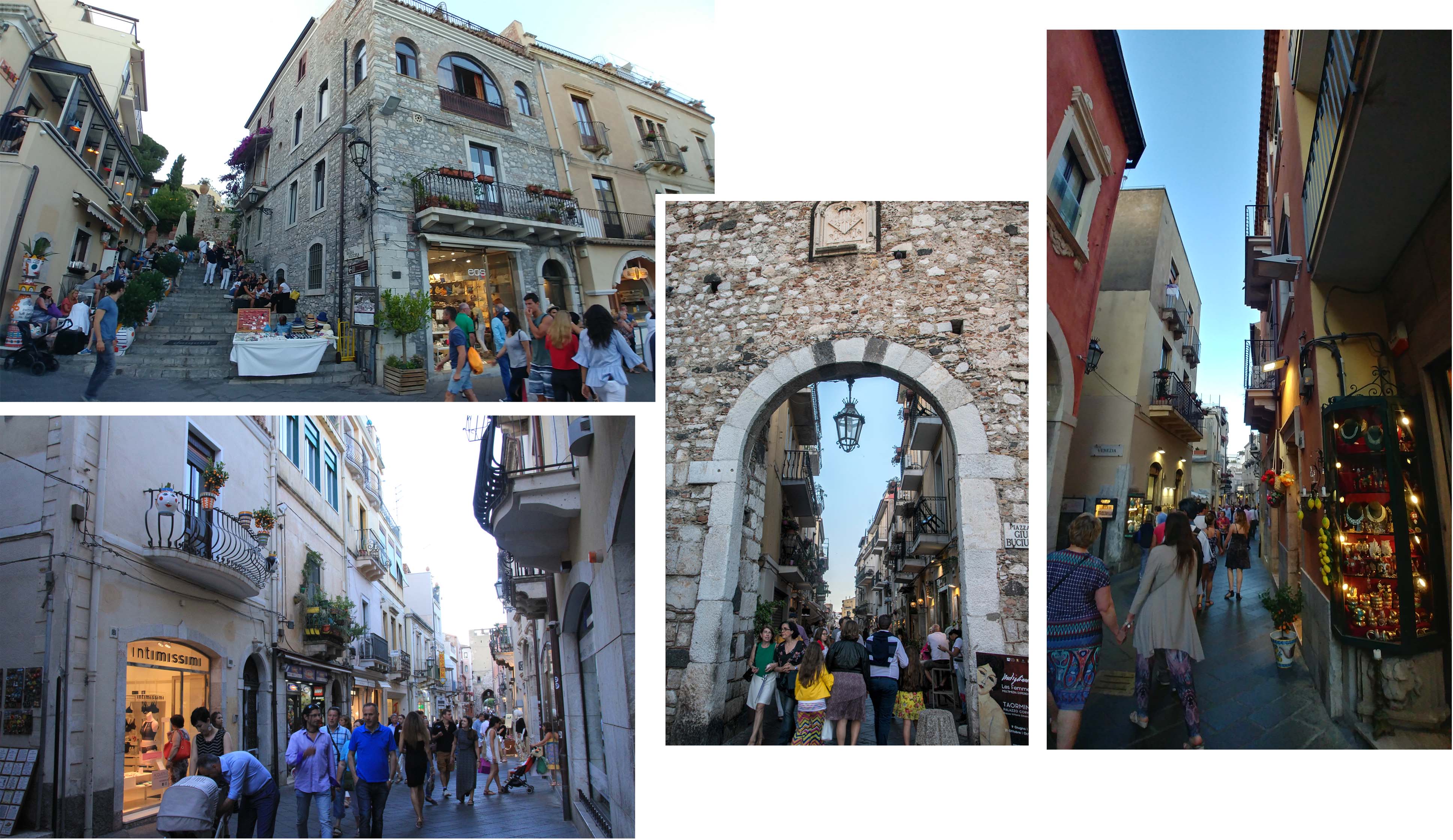 The old town was very vibrant and delightful. Two storey and three storey houses lined both sides of the pedestrian walkway. They were mainly souvenir shops, cafes and restaurant. The pedestrian walkway was about 900 metres and as the evening fell the street lights “golden” up the place.

We particularly liked the tiled square just in front of Chiesa di San Giuseppe. It had an unblocked view of the sea and horizon. Around the square were a couple of outdoor cafes/restaurants with life-band playing beautiful music. Somehow even in such a crowded place it still maintained a romantic ambience. 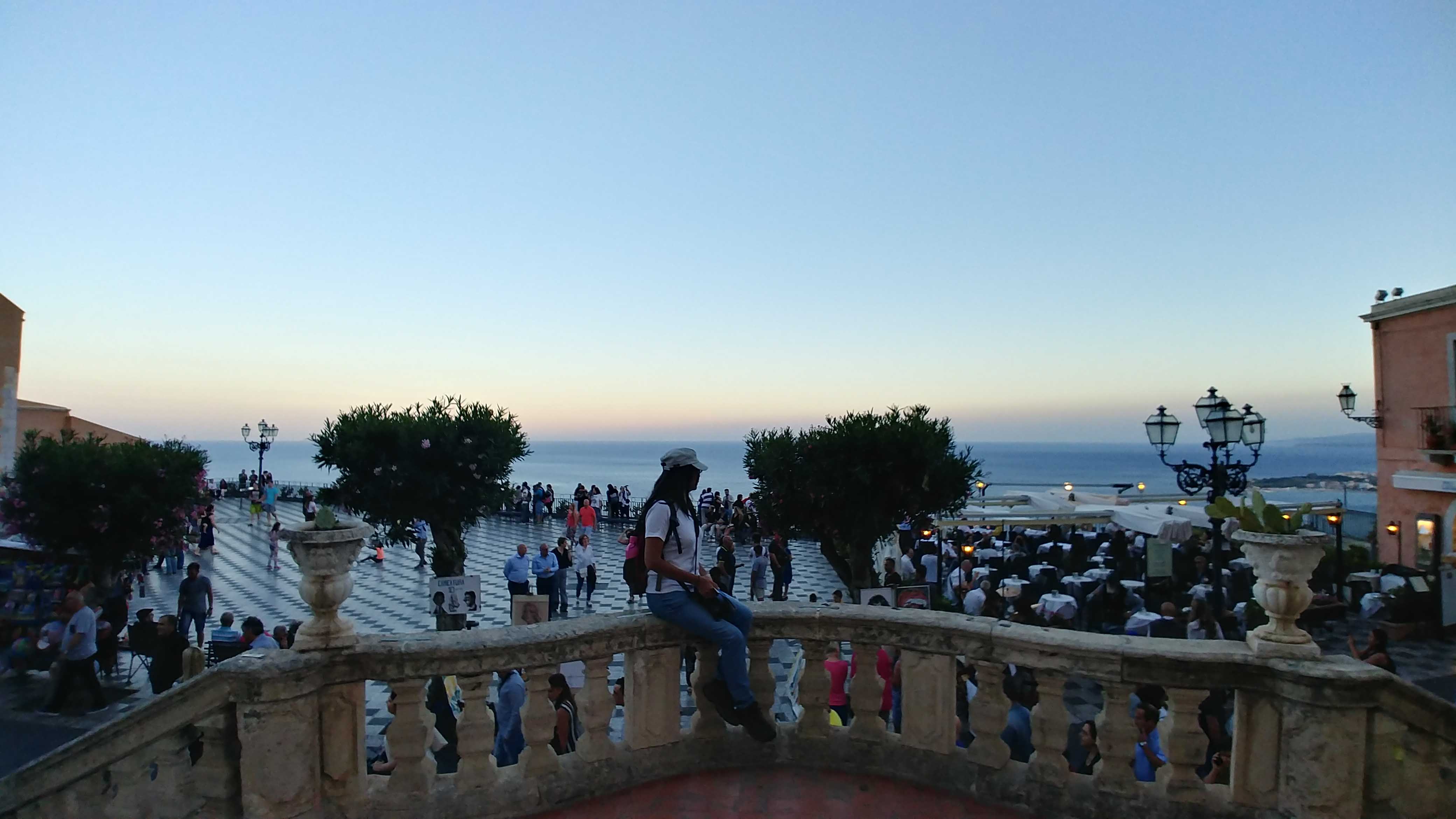 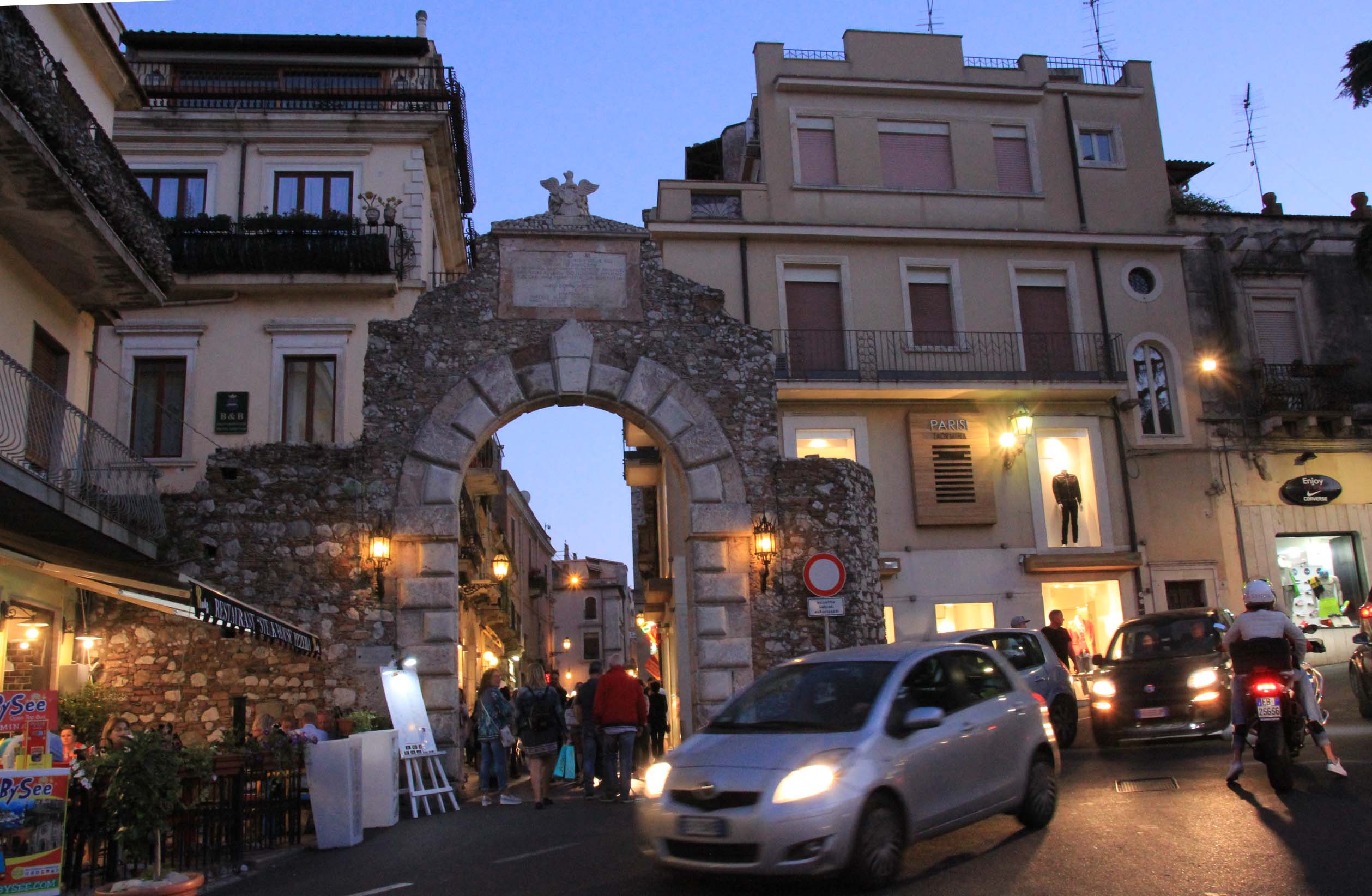 We went back to the square outside Chiesa di San Giuseppe and stayed there till night fall, till the place was “black and gold” before returning back to our stay. 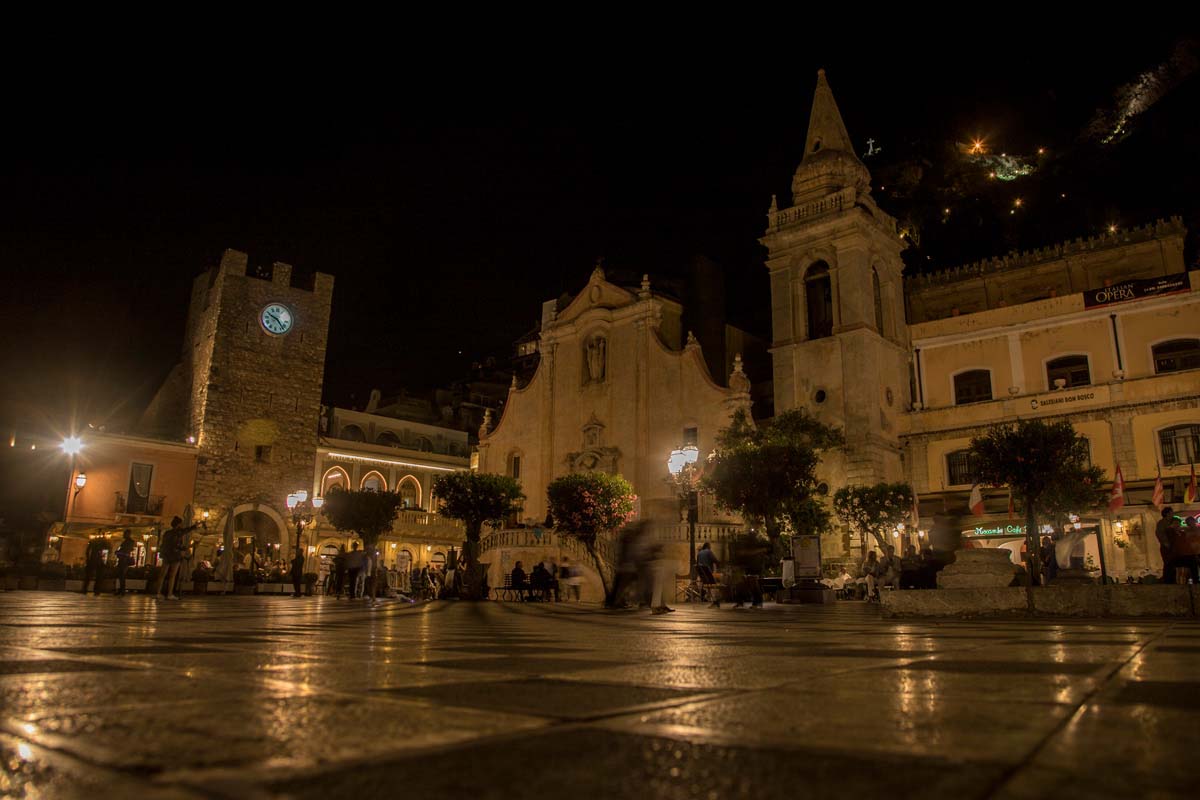 Our stay at Taormina

We had booked our stay “Appartmento IONIO ” from Airbnb (click “Gift Voucher” to received a cash voucher for new Airbnb signup). Once we booked the place about a few months before our arrival, our host Giovanni was already sending us the detailed instructions on how to get to his place.

We selected “Appartmento IONIO” because it had ensuite bathroom, cooking facilities, breakfast and free parking onsite.  Our “apartment” was one of the two listings offered by Giovanni, it was a separate unit attached to Giovanni’s main house. 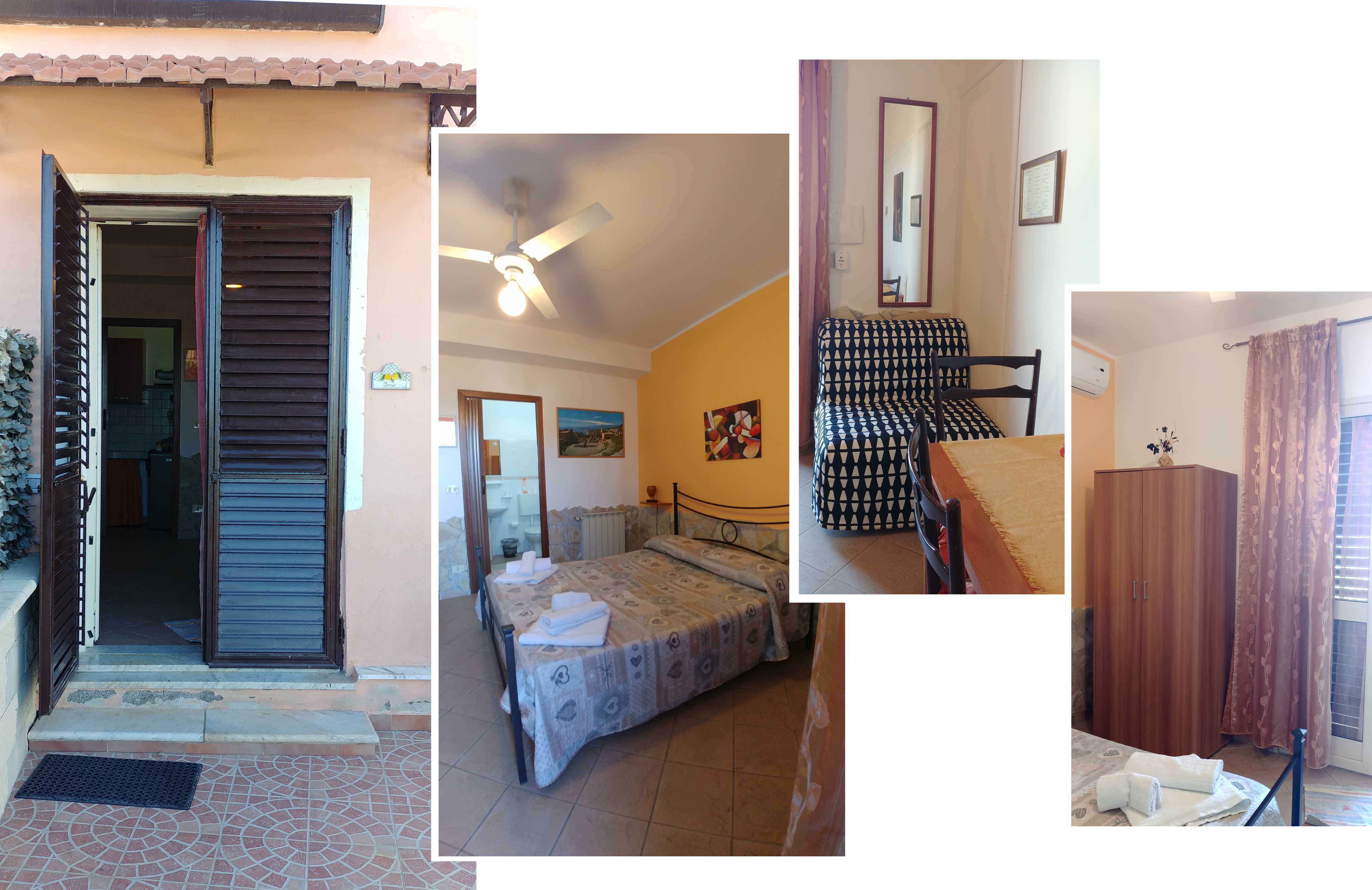 Our room at Appartmento IONIO

In the room was an ensuite toilet/bathroom and a small kitchen. The kitchen was in a windowless small room. Though it had a cooking stove, cooking utensils and everything that we needed to cooked a nice meal, I would not cook in that kitchen! The “cooking fumes” had nowhere to escape but back into our bedroom! 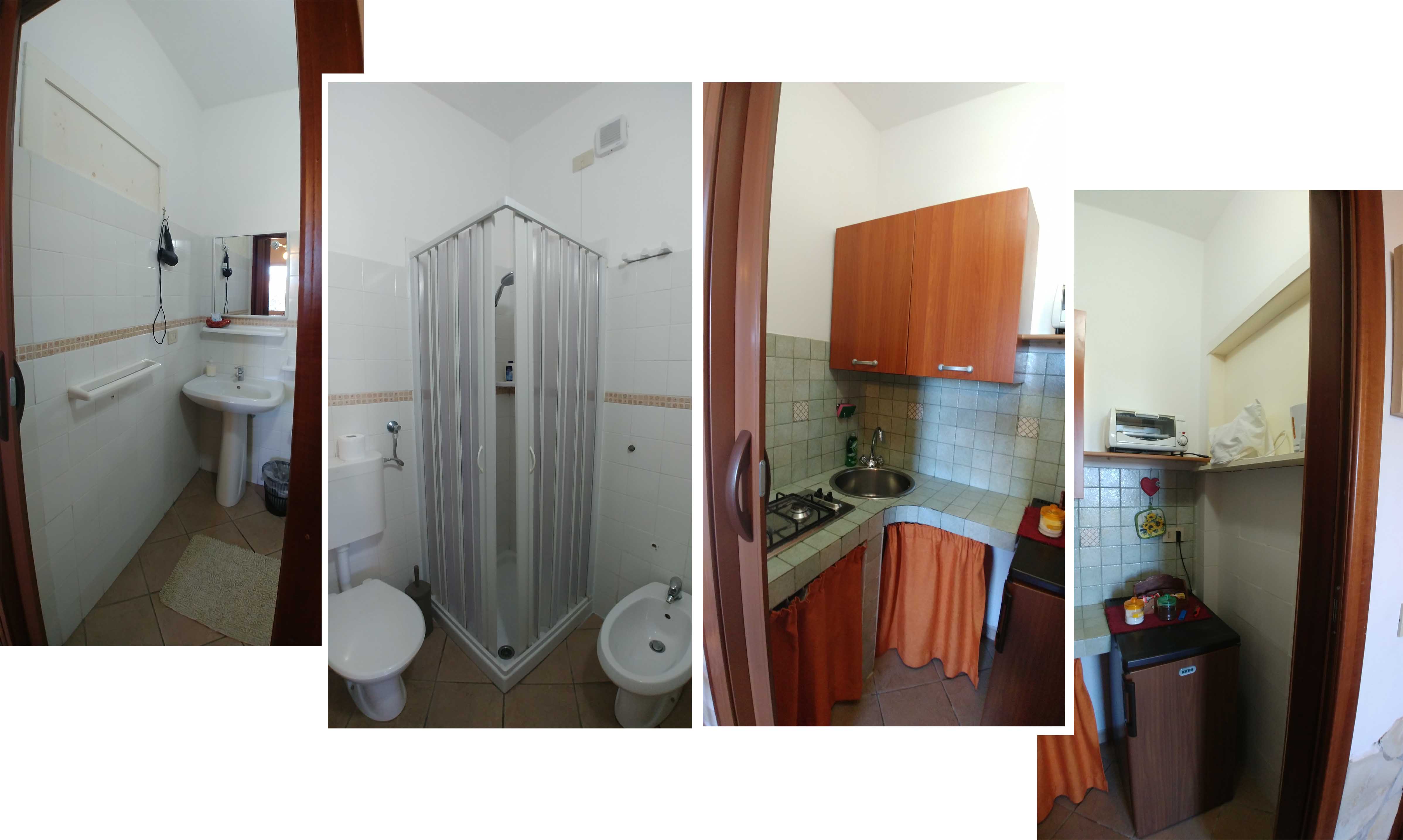 The apartment also had an private outdoor terrace with an outdoor cooking area. So instead of cooking our dinner in the tiny windowless kitchen in our room, I used the outdoor “kitchen”.

The thing we loved most about this apartment was its  outdoor terrace, particularly the “swing”. It was fantastic to relax on the swing staring into the blue horizon, enjoying the view and the breeze with no care in the world. 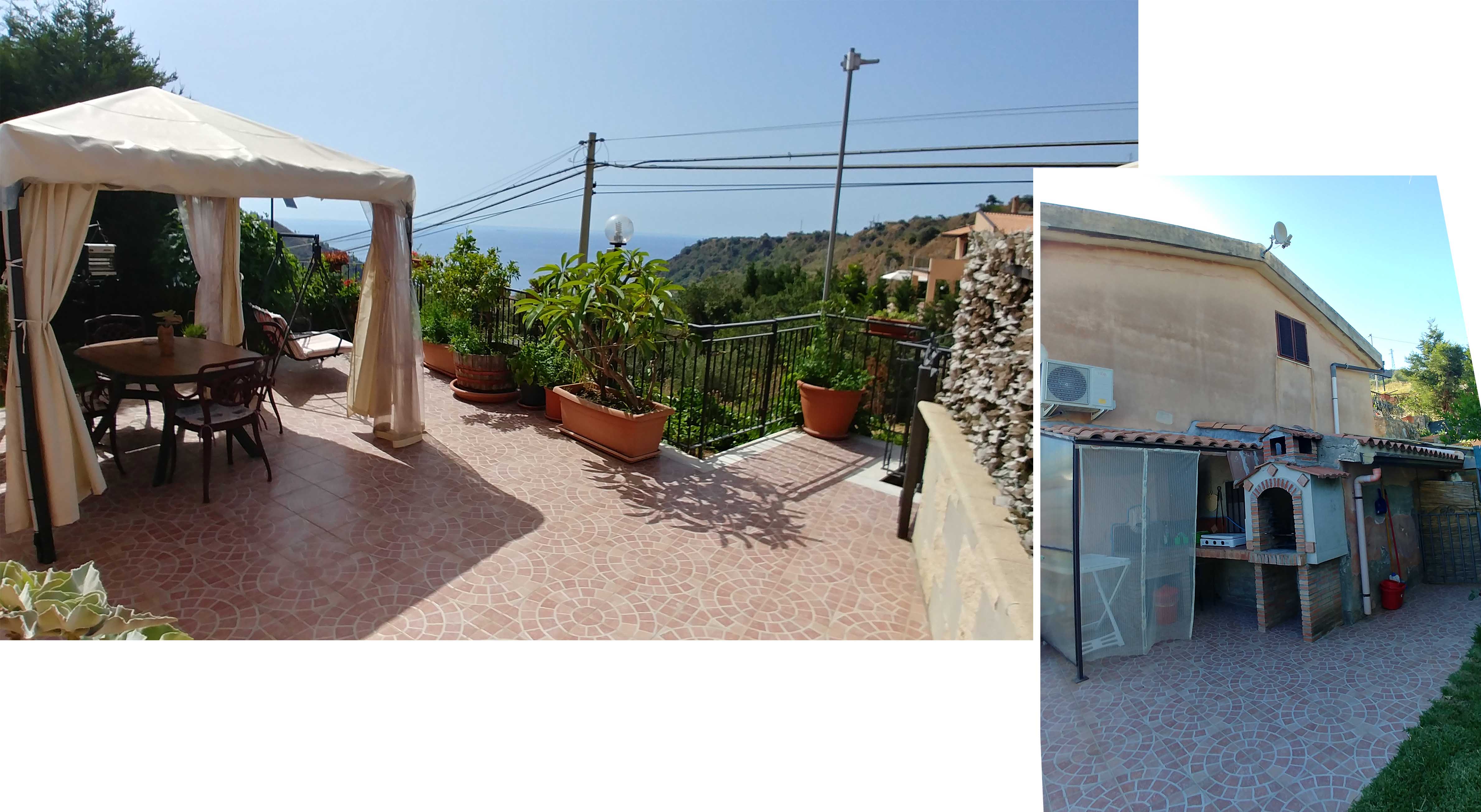 The next morning, we had a nice surprise to see our breakfast layout on the table in our outdoor terrace. The day before Giovanni’s wife had asked us for the time we would like to have our breakfast and how we would like our our eggs done. We thought we needed to go to the main house for our breakfast instead the breakfast was brought to us. This was our first Italian breakfast that served eggs! 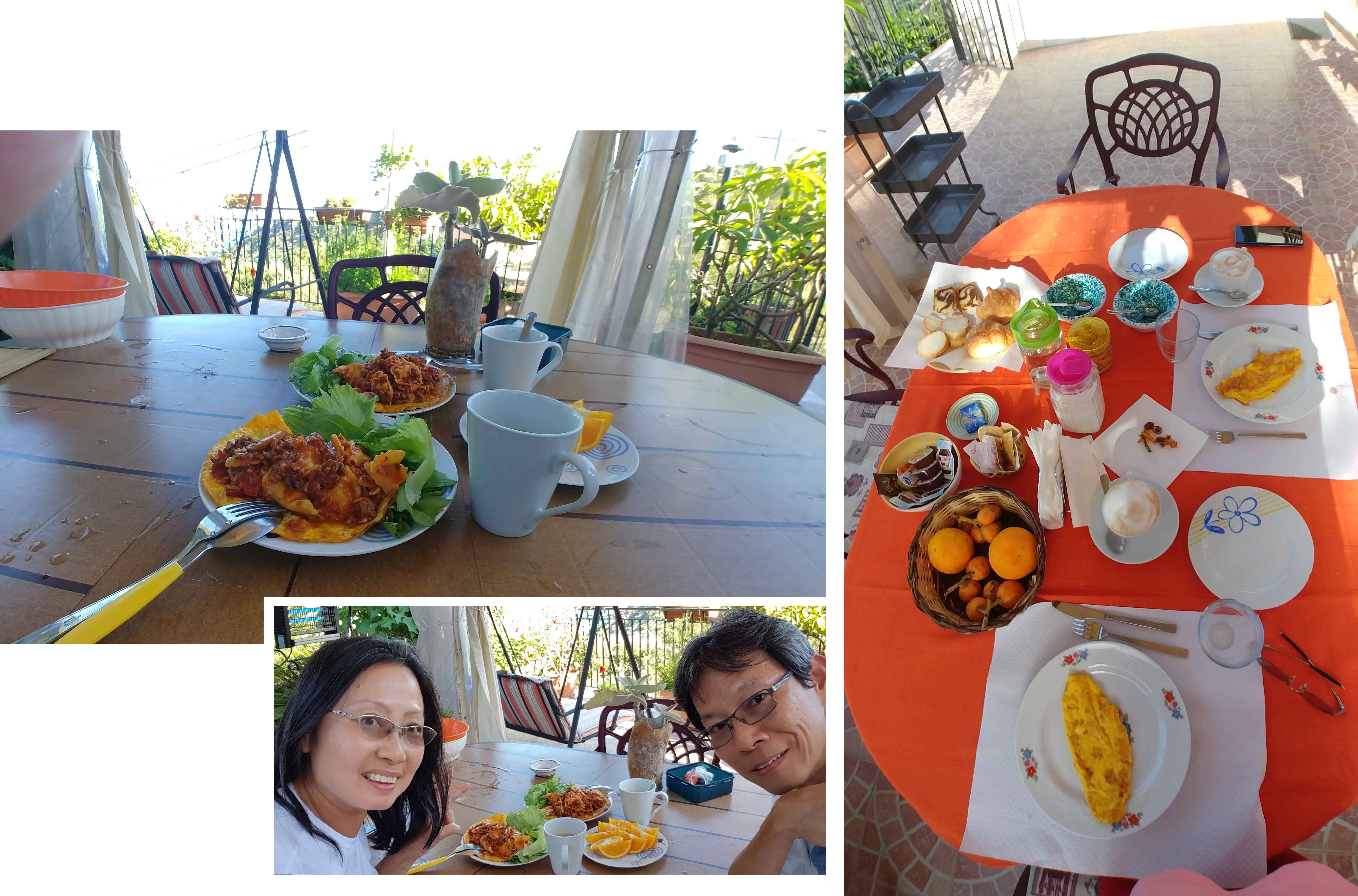 Self-cooked dinner and Breakfast from our host