The original plan for the day was to visit the ruins of the “Greek Theatre of Taormina” in the morning before driving to Ortigia. But we had since dropped all plan for visiting Greek ruins which left our morning free. Our new plan was to visit Catania city before driving on to the island of Ortigia. 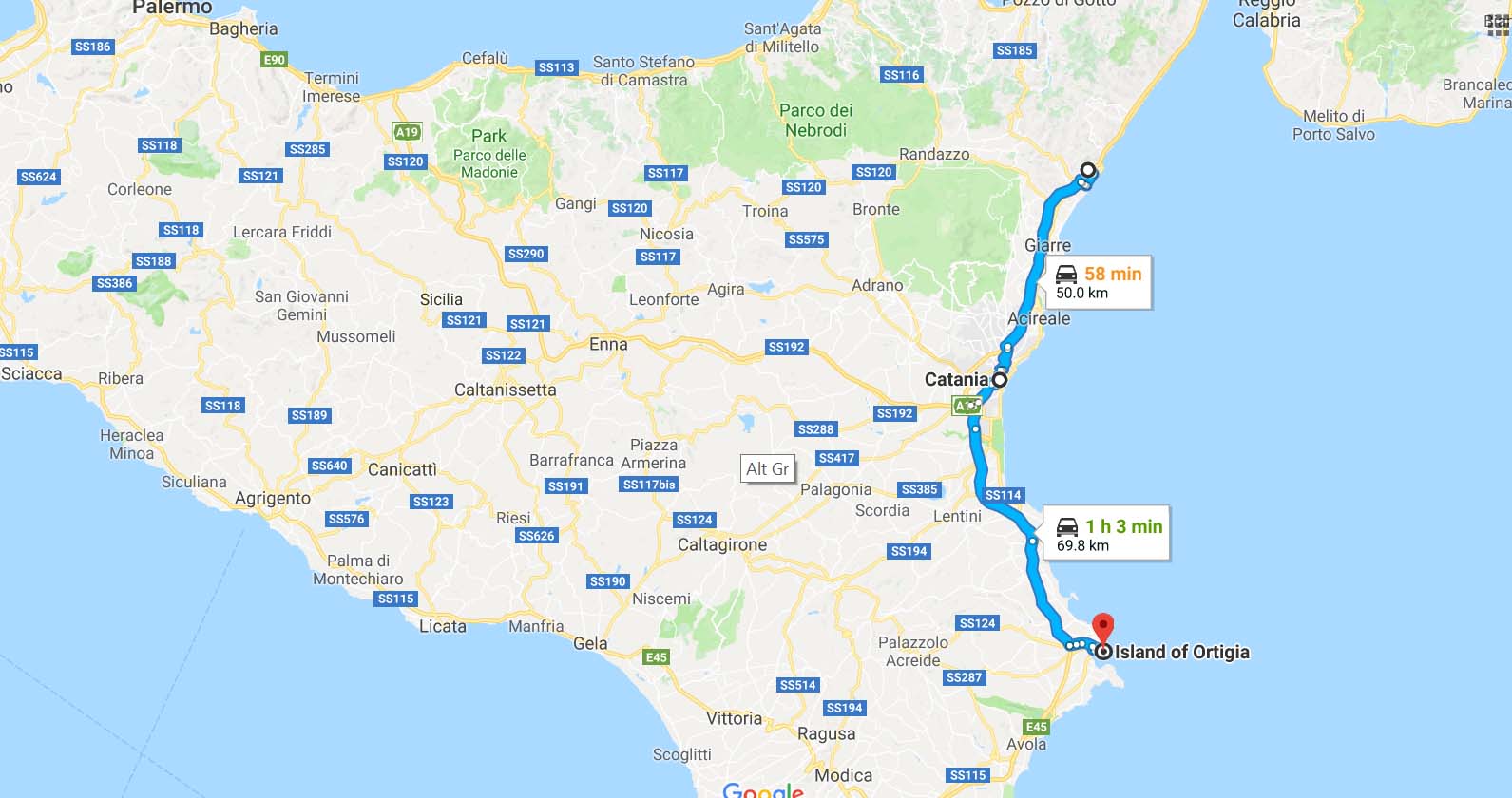 We nearly did not visit Catania old town due to a parking issue. In Ortigia we were able to explore the town in daylight and at night. Generally we felt that the town was more beautiful at night.

Catania was the second largest city in Sicily after Palermo. Our focus was on Catania old town, which like many  new or old towns in Italy, it was off limit to car. Getting to the old town was not difficult but finding a carpark was tough. We saw two caparks “Parking Catania Center” and “SS14 Parking” on google map so we drove onto the roads we thought would lead to the carparks, unfortunately we just could not find the entrances to the carparks. We saw many cars parking illegally below a railway track but the place looked so scruffy and far from the old town  so we rather not parked our car there.

We looped around for about an hour searching for the carpark entrances and were on the verge of giving up when we finally found another carpark. This carpark was not listed on the map and it was pretty near the old town.  The road to the carpark was one of the branches of a circle road. At the start of the branch was a “non entry for car” sign. But the sign was meant for the road section further up  but before that there was a left turn into an unmarked (on google map) car park. 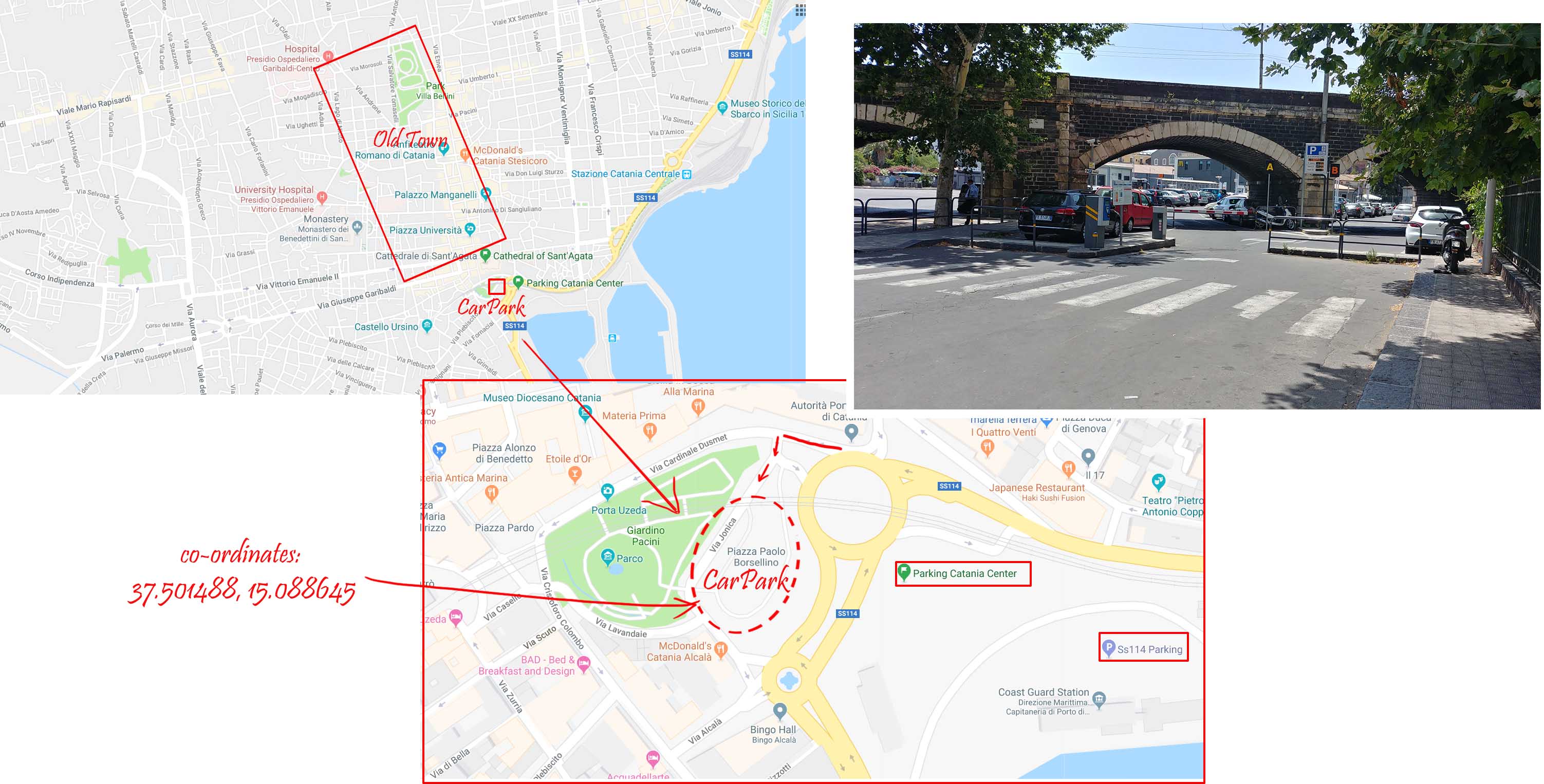 Carpark near to the old town of Catania

We were so glad to be able to park our car else we would have to leave without exploring the old town. On the road to the old town we saw a number of street vendors selling fruits and souvenirs. The stuff were pretty inexpensive so we bought some souvenir and a pack of strawberry. We saw an arch stone gateway, it was Porta Uzeda the south entrance to the old town.

Street vendors along the road to the old town

Porta Uzeda was part of a huge complex. Walking through the arch stone gate we seemed to enter a wide flanked by three storey building on both sides. The building on the right side was a museum. 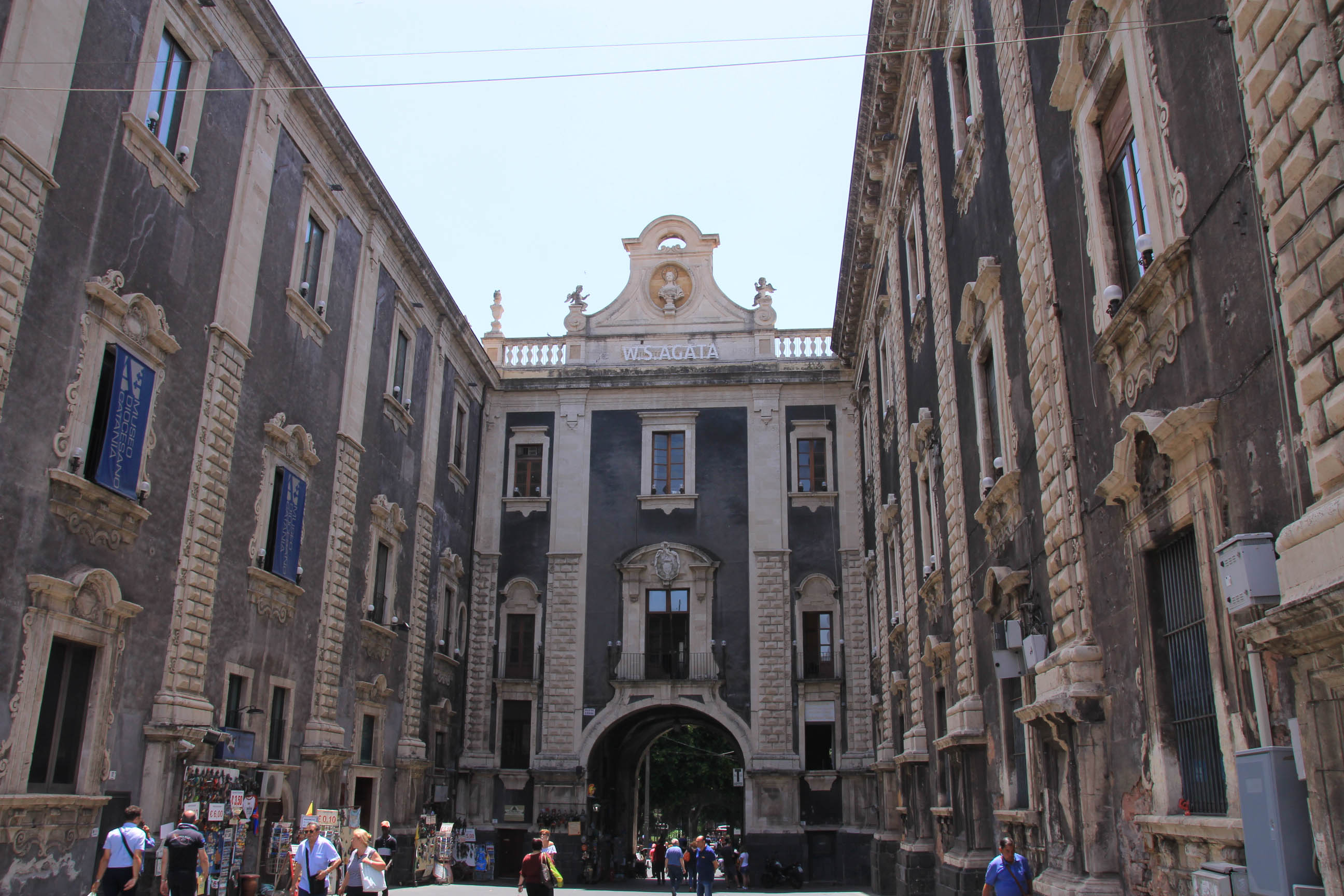 Further into the old town was the Piazza Duomo. On one side of the piazza was the Cathedral of Catania, also known as Cathedral of Sant’Agata and in the middle was an “elephant” fountain.

There were many versions as to the reasons why an elephant was used as the symbol of the fountain. Some versions said that once a flock of dwarf elephants lived at the foot of Mount Etna, others said that it was in memory of the wizard Elidoro who could turn into an elephant. Still others thought that the elephants was a symbol of victory when Catania won over Libya or Catania was an elephant town etc etc.

Cathedral of Sant’Agata and the Elephant Fountain

The old town was full of historical building and it was nice that the piazza was not overly crowded with visitors. We explored for about one and a half hour before we left for the island of Ortigia. 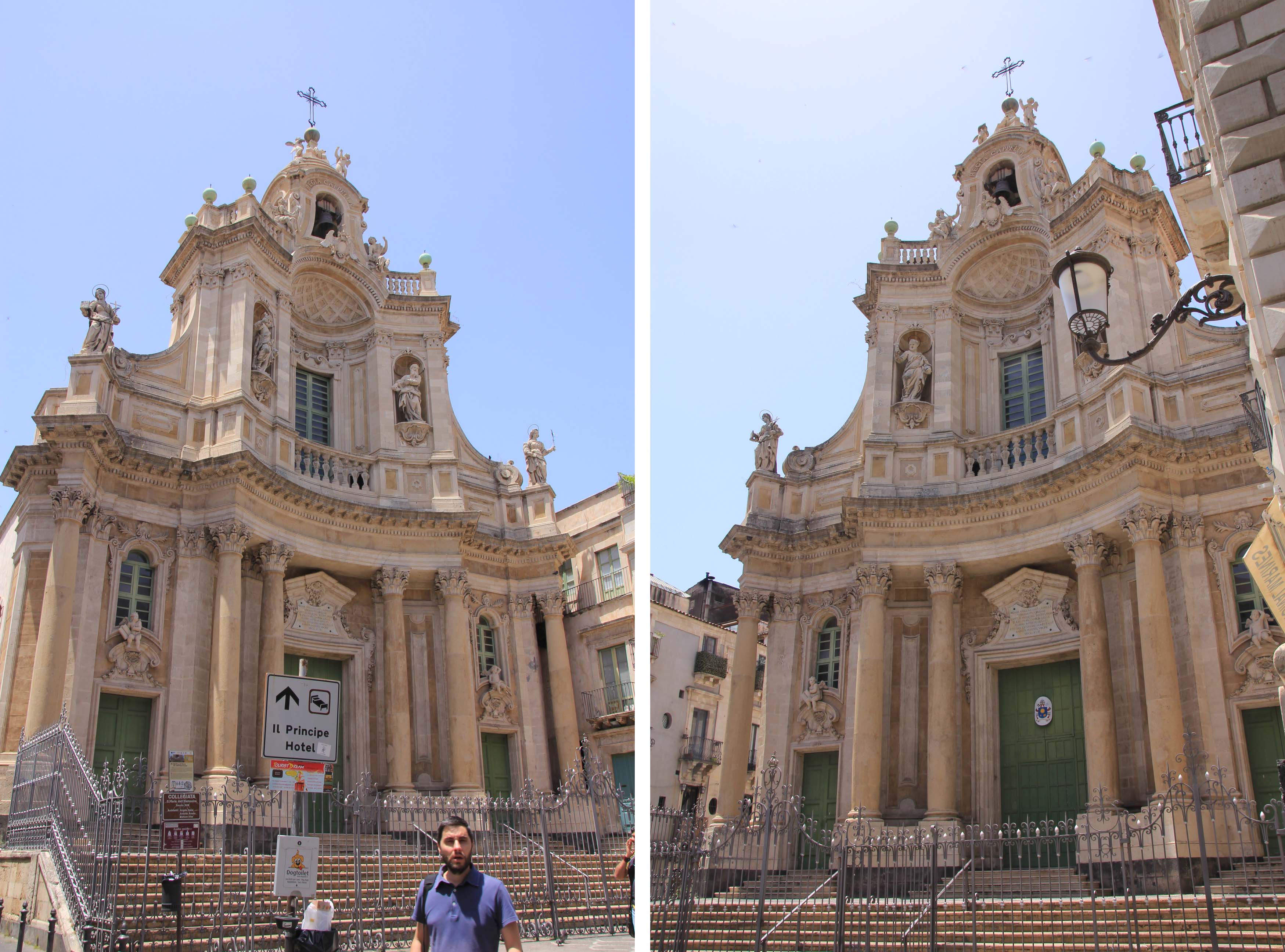 Another church at the piazza

The island of Ortigia was connected to the main island by two bridges. At certain part of the day the island was off limit to non-resident car. We had booked a place to stay for a night in Ortigia which would give us more time to explore the island. 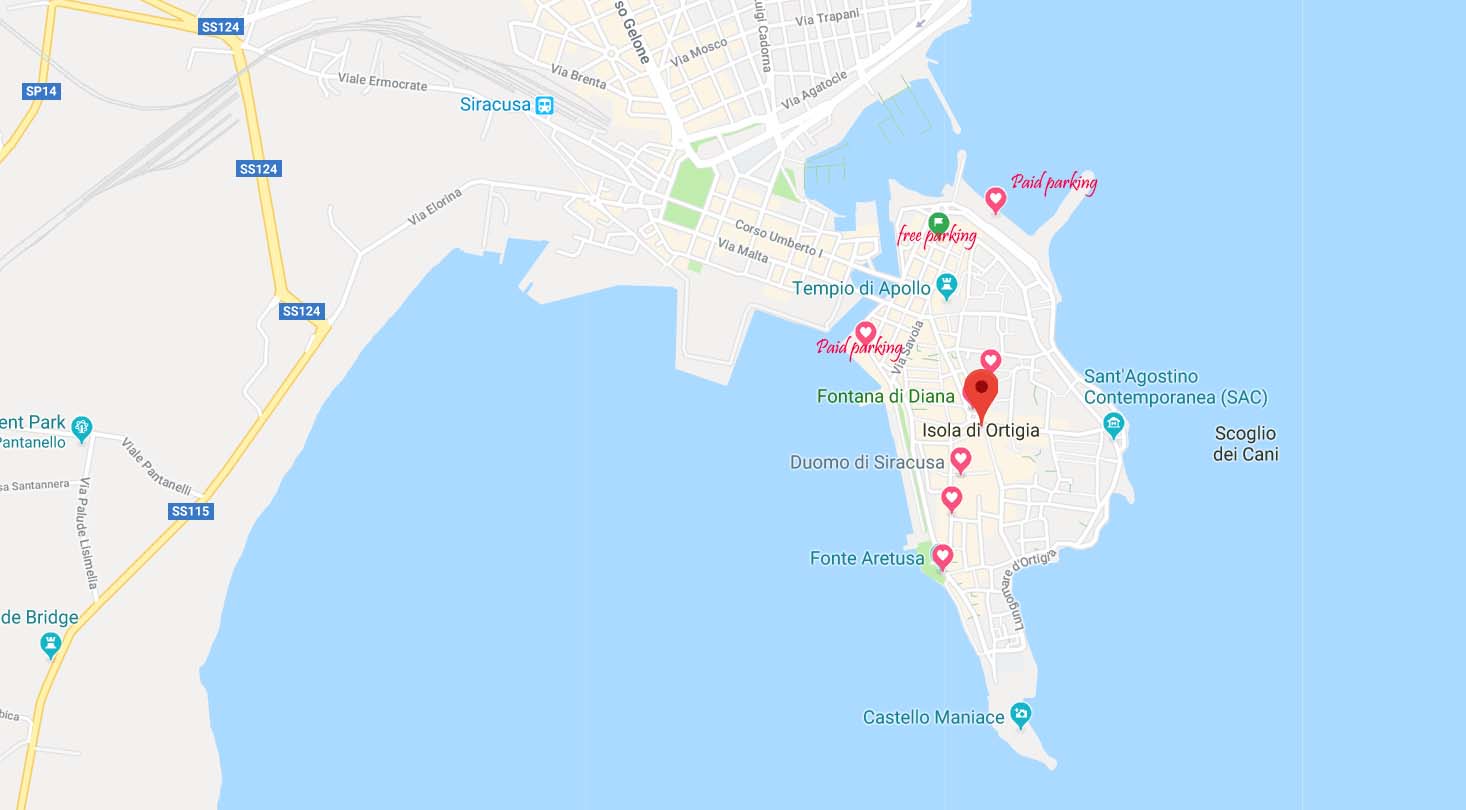 We had marked out one paid parking area on the main island (very close to the bridge) and three paid parking areas on the island. We had not decided where we should park as that would depend on the parking charges. We drove over the bridge onto Ortigia and turned right to “Parking Della Marina” which was just 100 metres from our “stay”. The parking charges was €1 an hour and we would be on the island for at least 20 hours. The advise from the parking attendant was to park for half the fee on the main island.

The idea of dragging our luggage from the main island to our stay for about 500 metres under the hot sun was just too unappealing. Luck was with us as we managed to contact our host. We were to drop our luggage at the doorstep and drove on to an area on the island that allowed free parking. 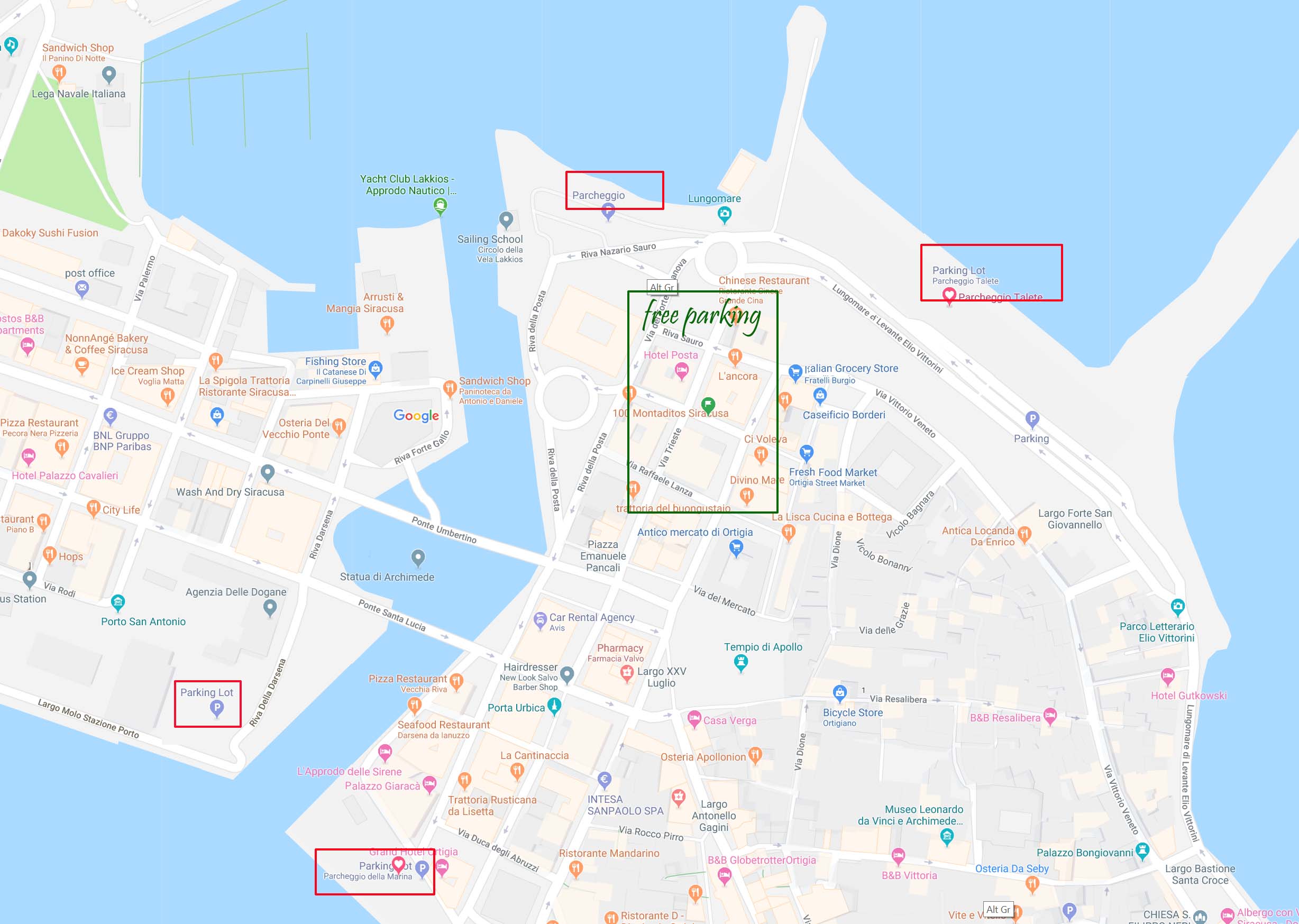 Parking on the mainland and in Ortigia

At about 6 pm after a good rest at our “stay” we came out to explore the island. In June the Italian sun was just too hot in the afternoon so we prefered to stay in to rest till 5 or 6 pm. This also gave us the energy to stay out till late at night. From 6 to 9.30 pm we had more than three hours to explore the places in daylight and after sunset we had a couple of hours more. In the night light some of the places appeared even more beautiful than they did in the daylight and with the cool weather it made strolling about very pleasant. 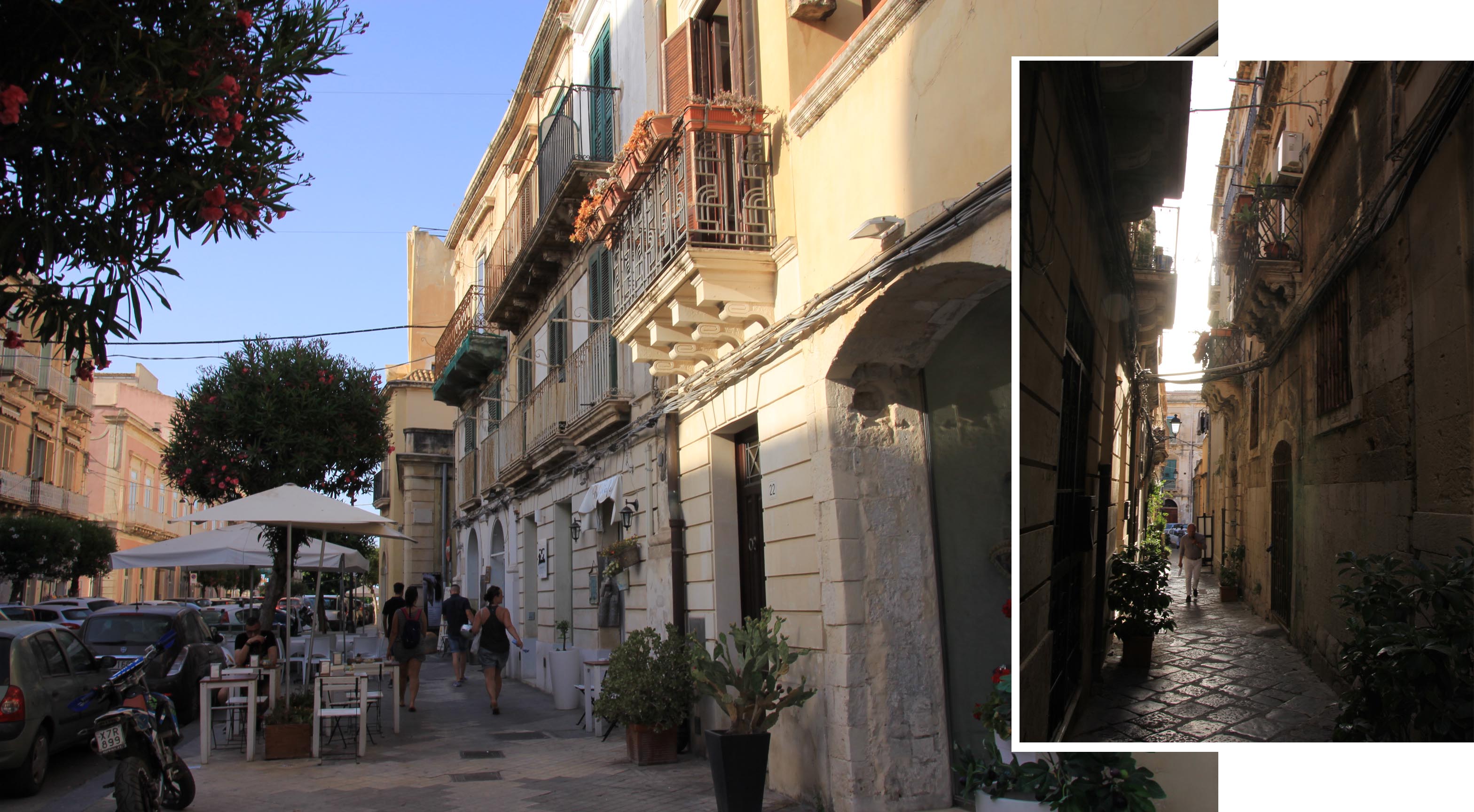 Streets and alleys of Ortigia

Our stroll took us to Piazze Archimede, in the middle of the square was a fountain, “Fountain of Diana”. In the middle of fountain was Artemis the goddess (also known as Diana in Roman), at her foot was a nude nymph Arethusa trying to escape from  the amorous Alpheus (peeking from behind the goddess). The spray of the fountain was not activated which in a way allowed us to have a clearer look of the fountain. 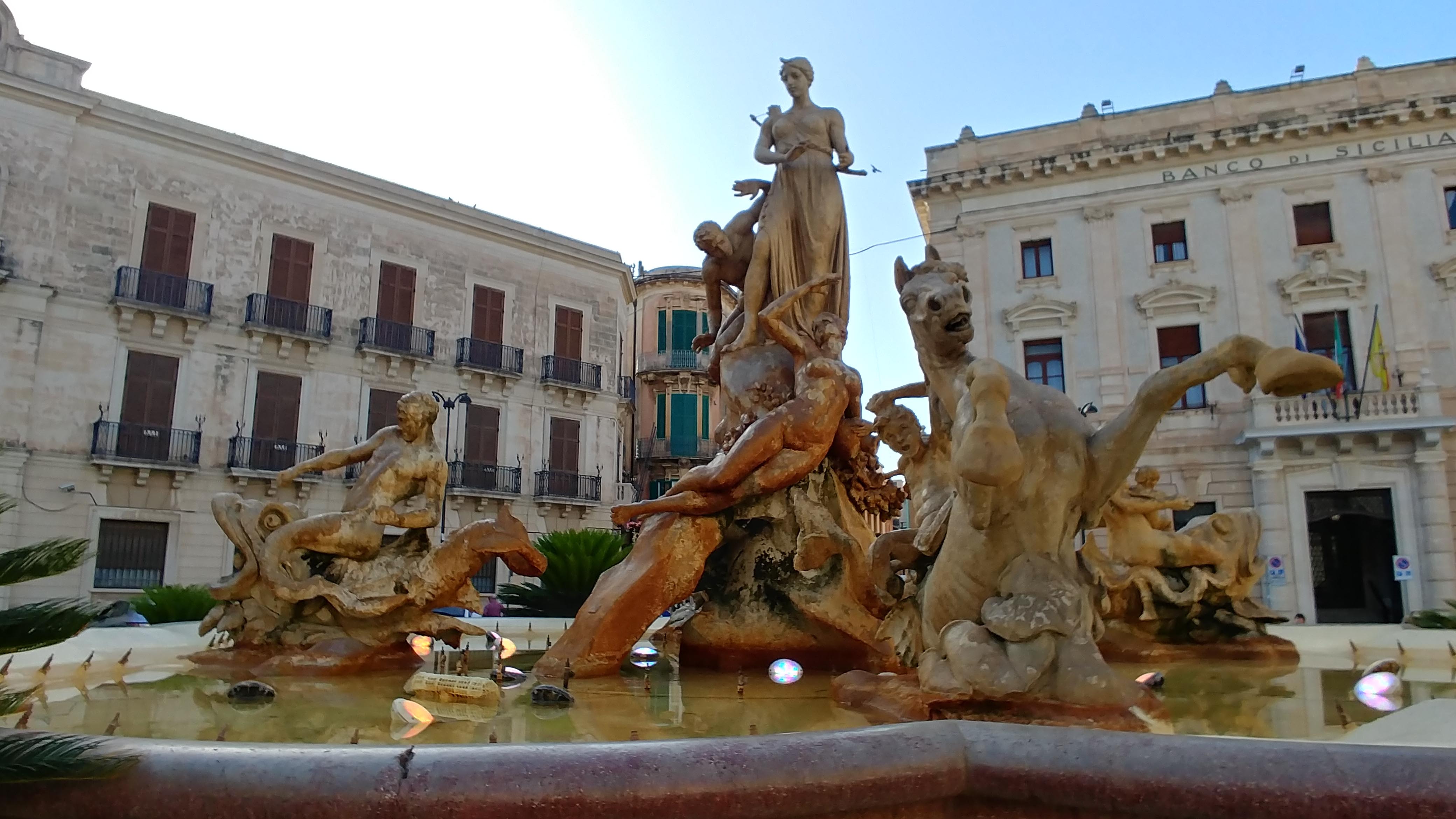 From the fountain we walked to Piazza Duomo where we saw the Cathedral of Syracuse. This Cathedral had a complicated history. The original building at this site was a Greek temple (Temple of Athena) built in the 5th Century BC. The temple was a Doric edifice with six columns on the short sides and 14 on the long sides. The present catheral was constructed in the 7th century and it corporated the battered Doric columns of the original temple into the walls of the current church. In 878 the building was converted into a mosque and converted back to a cathedral in 1085. 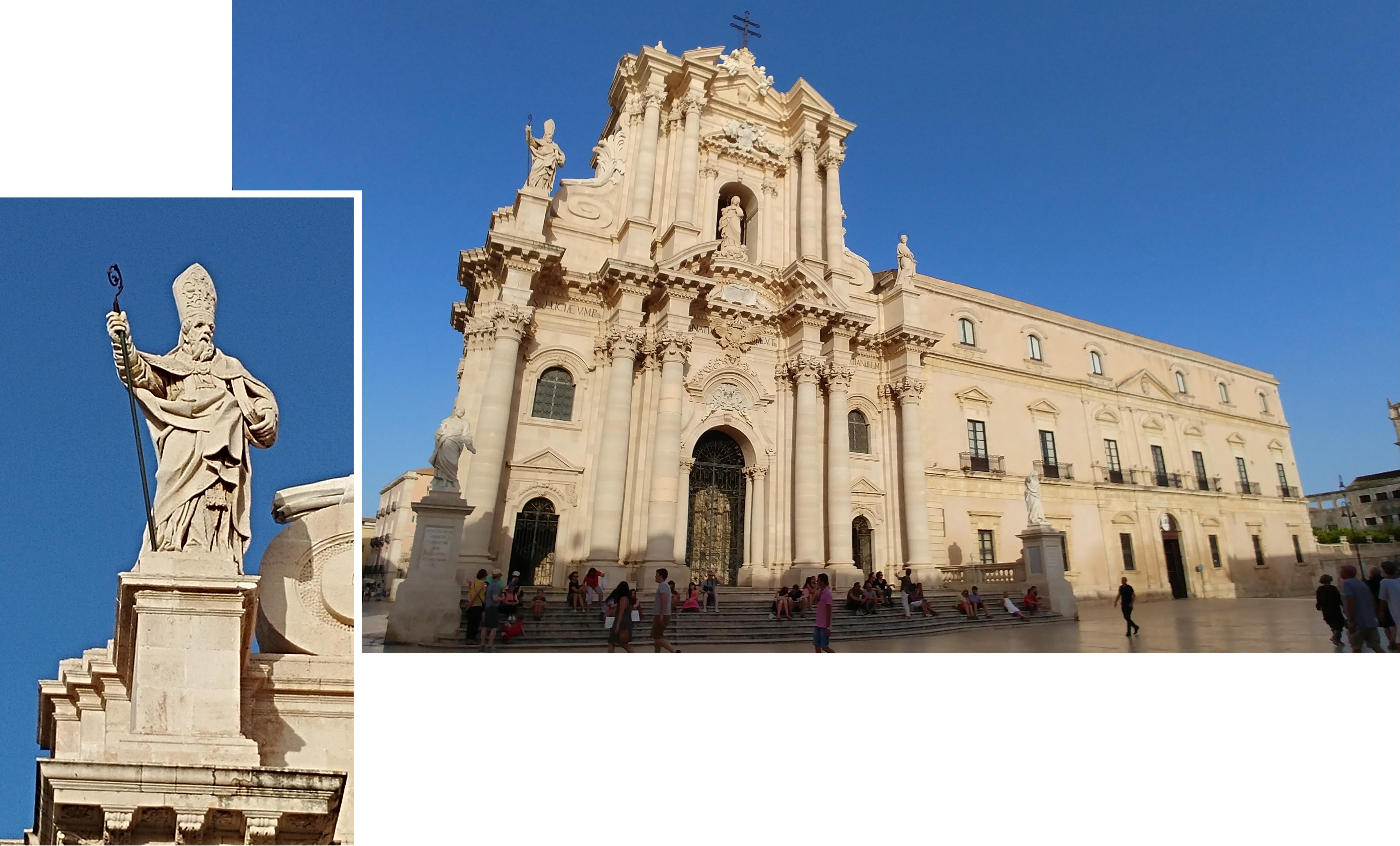 Cathedral of Syracuse and it statue of Saint Paul

We strolled toward the sea-side promenade and came to a structure that looked like a huge round concrete basin filled with water at the bottom. This basin was the Fountain of Arethusa. Apparently it was a natural fountain and according to Greek mythology the fresh water fountain was the place where the nymph Arethusa returned to earth’s surface after escaping from her undersea home. 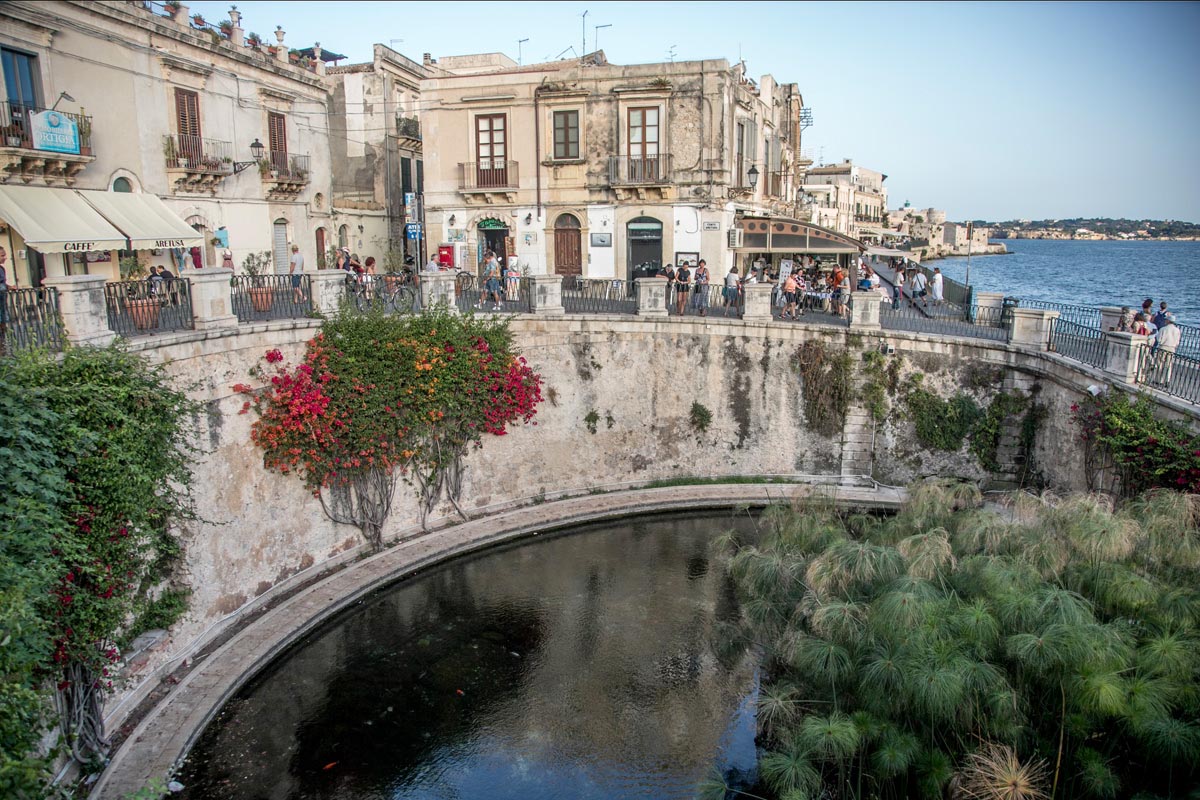 The sea-side promenade had a stretch of restaurants. We looked from one to another searching for one where we would like to return for our dinner in the evening. Eating dinner at one of these restaurants would allow us to enjoy the sun setting over the sea. From the promenade we walked towards the tip of the island, unfortunately the road to the tip was barricaded so we turned around and looped to the east side of the island. 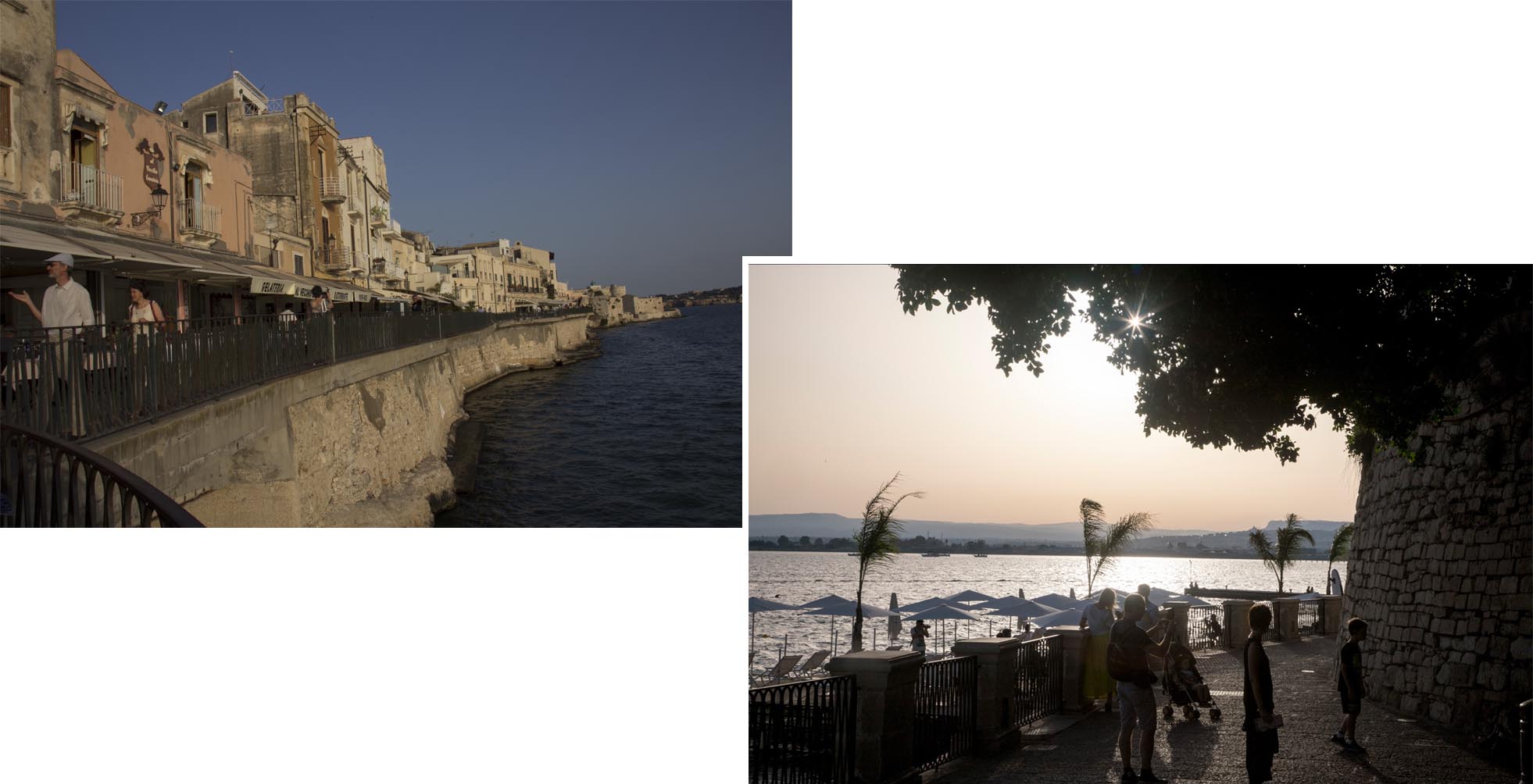 We walked to the east side of the island which was less touristy. The “east” side looked more run down but since it was still early for dinner we walked the whole east-stretch before turning back to Piazza Duomo.

East side of Ortigia

We decided to have our dinner at one of the restaurants at Piazza Duomo. Though we were early most of the outer tables facing the Cathedral of Syracuse were already reserved.  We took a slightly inner table which had a partial block view of hte cathedral 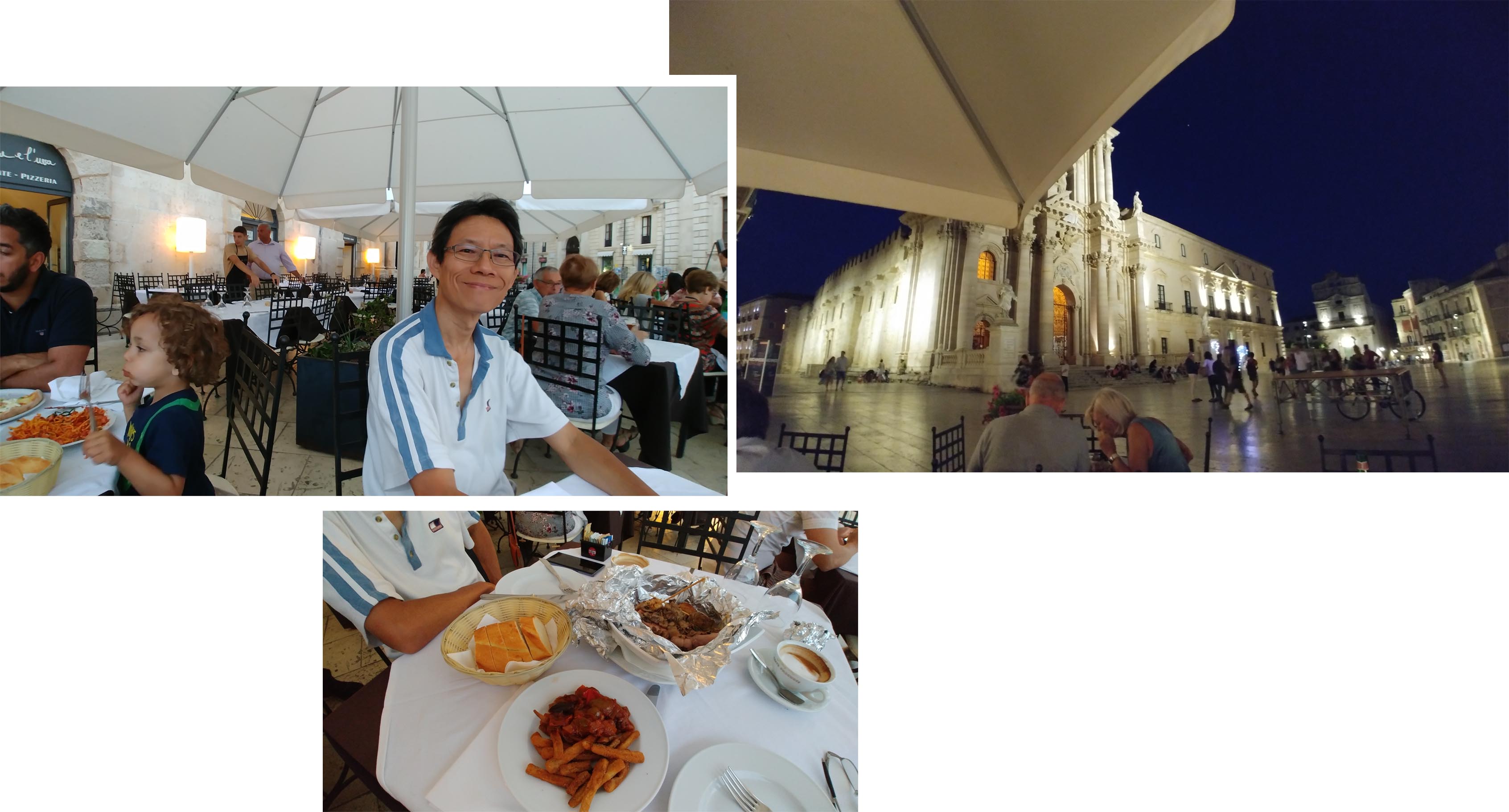 Dinner at a restaurant on Piazza Duomo of Ortigia

We had a slow dinner, eating and relaxing as the daylight faded and the cathedral lights came on. Our dinner costed €25 which was slightly pricey but normal for such a “vintage” location. 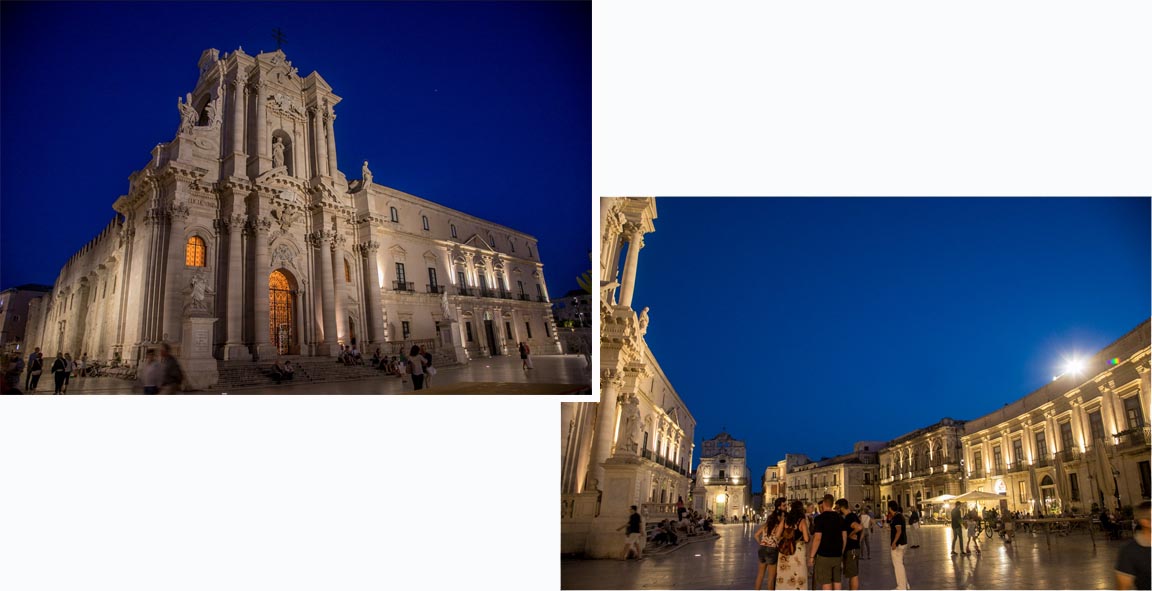 After dinner we went for a “after meal” stroll and walked back to Fountain of Diana. This time the water spray of the fountain was activated and with the night lights the fountain looked even more beautiful than its “daytime” version. The piazza around the fountain was rather quiet, there was one or two cafes but they were empty except for the staff. 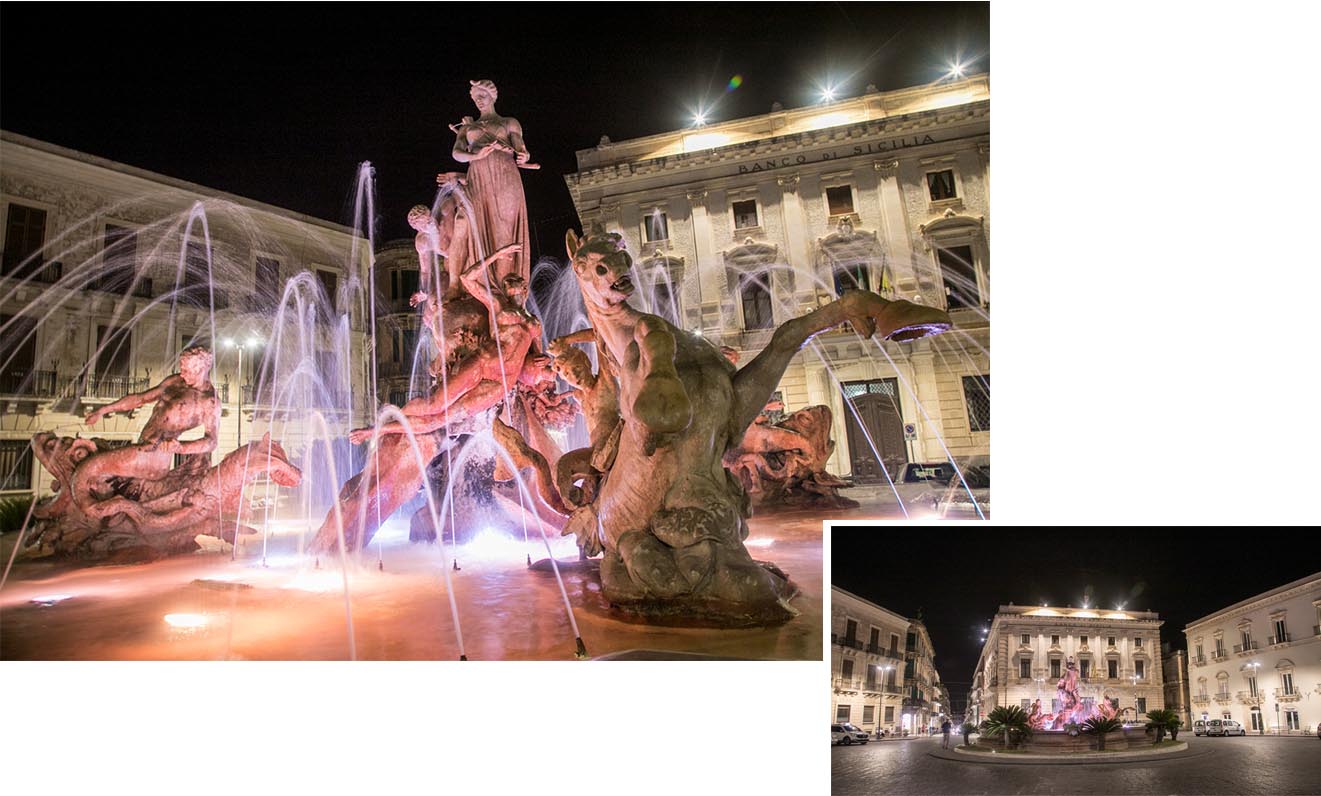 At about 11pm we went back to our stay. Just when we were to keep our cameras we opened our room window and saw a spendid view of the harbour! 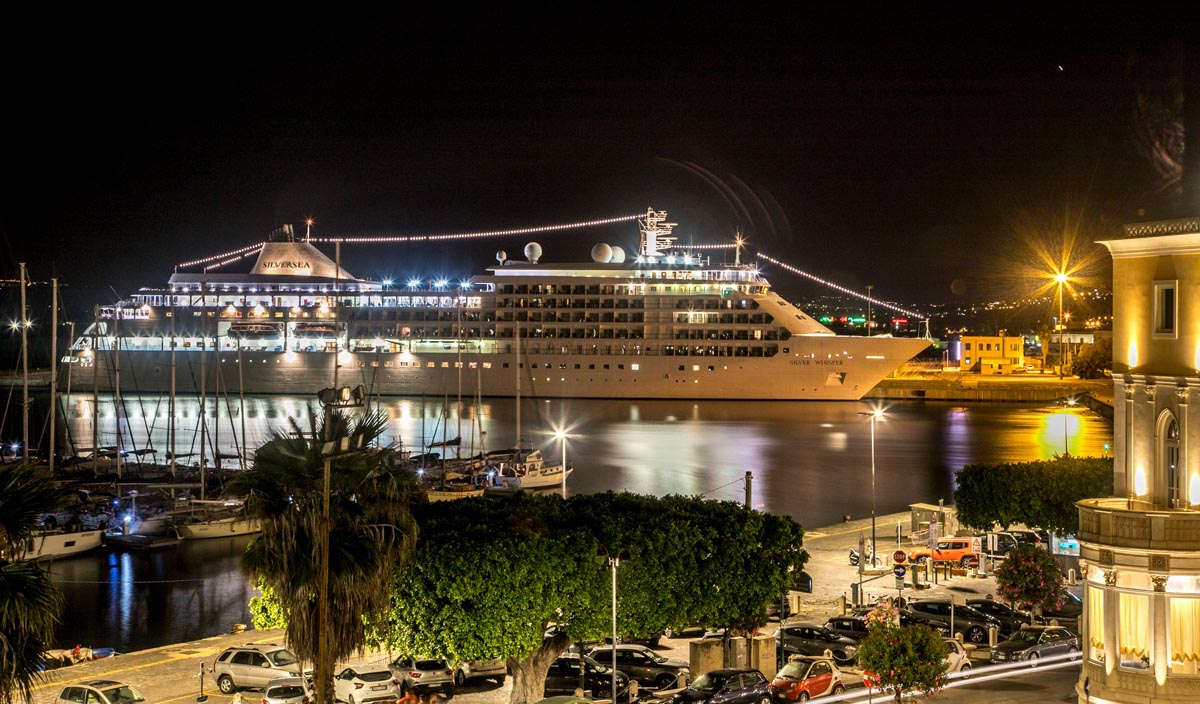 Our Accommodation at Ortigia

We booked our stay at “Porto Turistico Appartamenti” from booking.com for €50 a night. It was a double bedroom with good balcony view. The room did not come with ensuite bathroom, cooking facilities, breakfast or free parking onsite. The main reason we booked this listing was because we saw a paid carpark “Parking Della Marina” nearby. After our car theft incident we prefered to have our car as near to our stay as possible.

Our room was on the 4th level of the building and fortunately there was a lift in the building. Our double room was one of two rooms in an apartment. Lucky for us the second room was not occupy during our stay, so we got the whole place to ourselves! 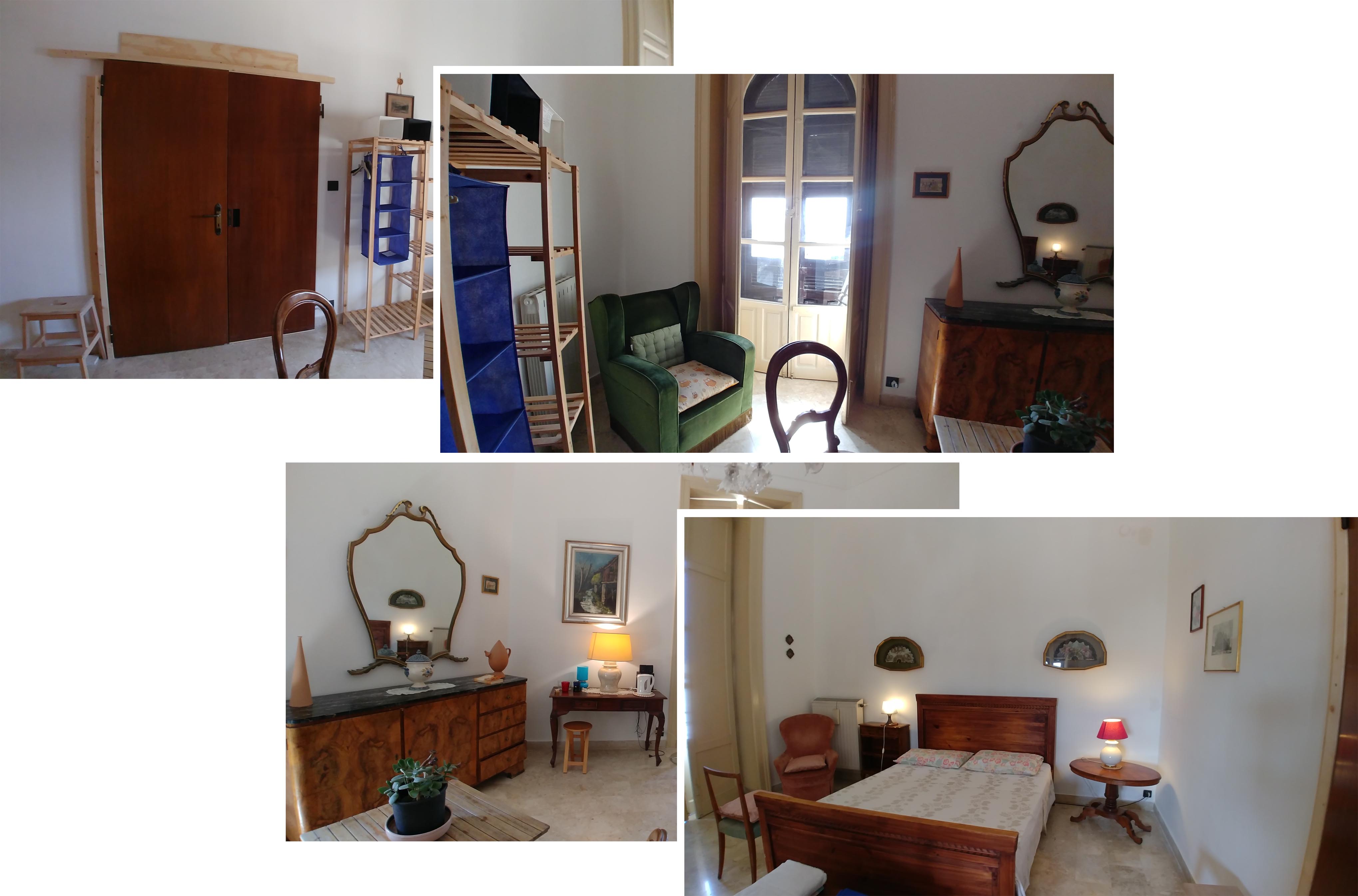 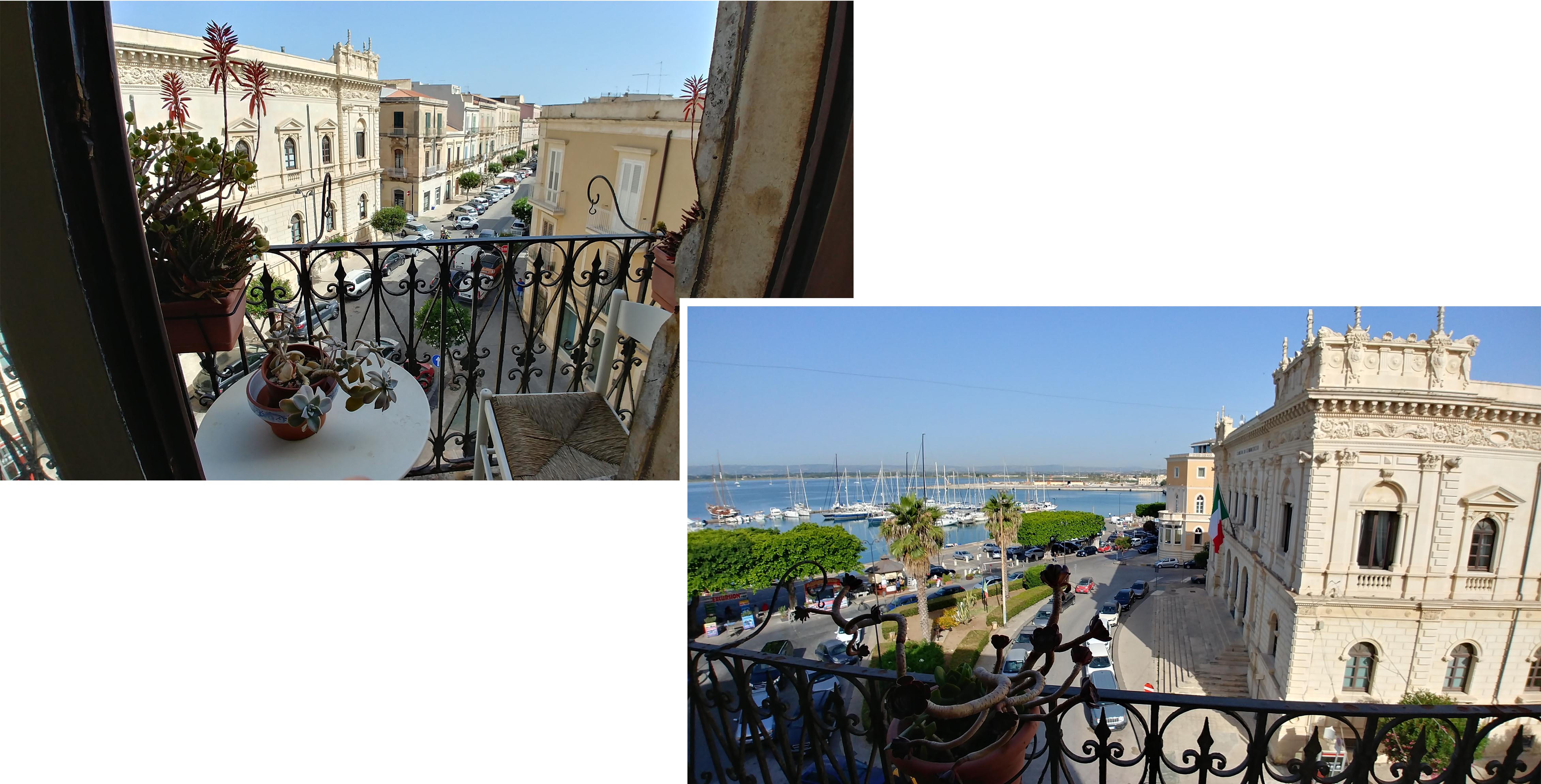 Window views from our double room

Outside our room was a common space with a fridge. There was also a short corridor that led to the shared toilet. 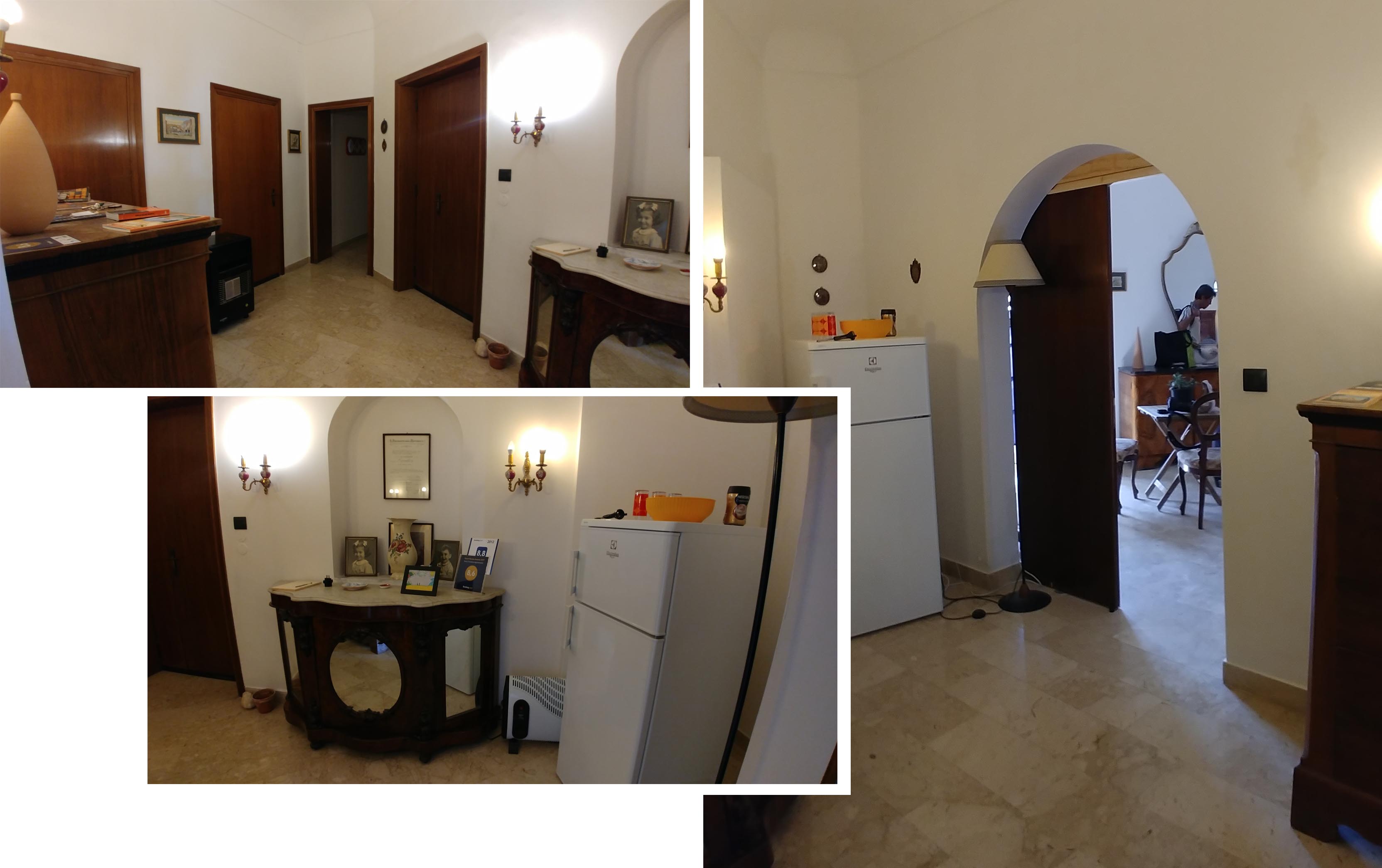 Common space outside our room

The toilet was very clean and spacious. The hot water was good and strong. 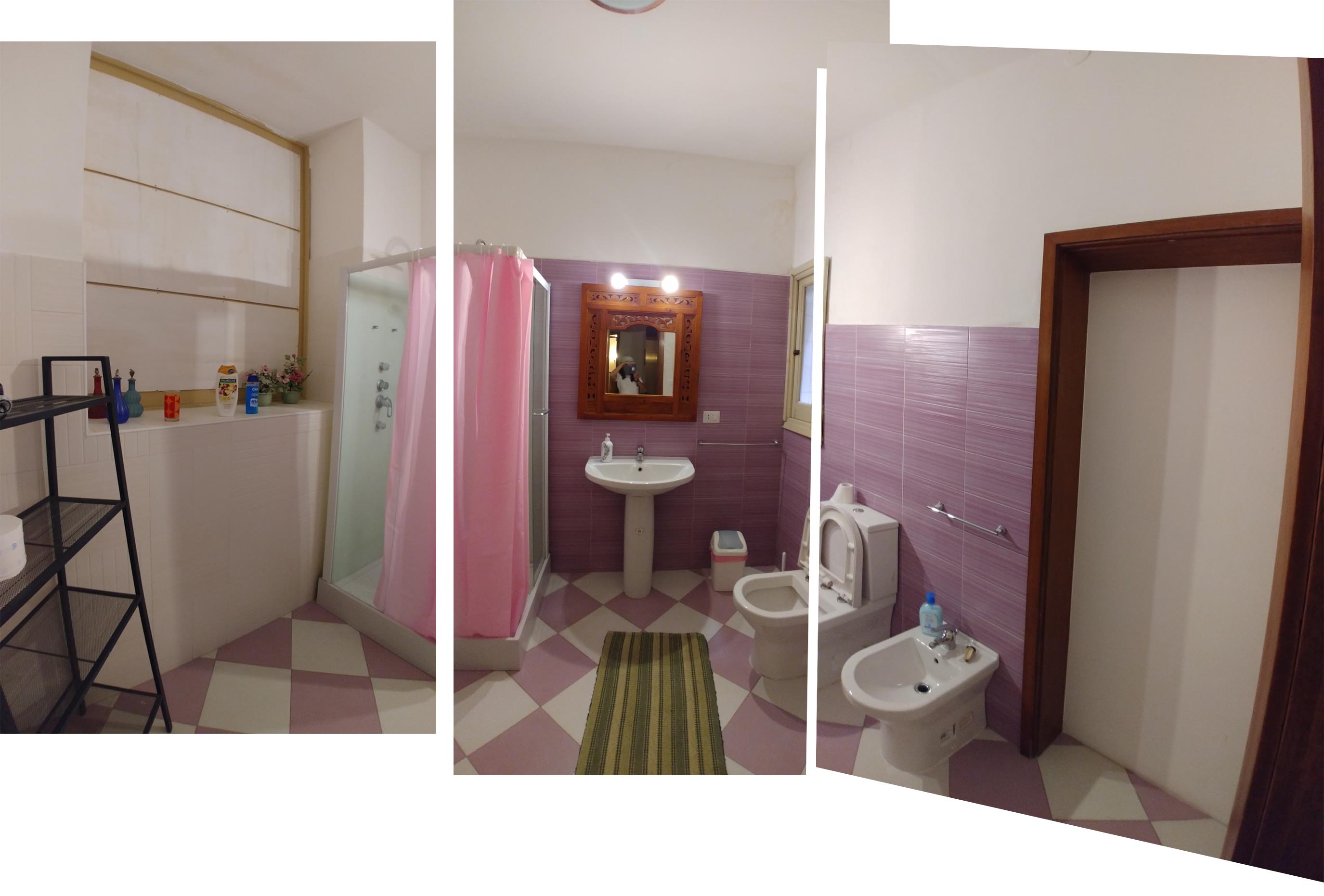 Shared toilet in our apartment