The plan for today went through two changes all because of Typhoon Mangkult. Originally we planned to explore Hanoi then it was changed to our Halong Bay Cruise (3 days – 2 nights) finally it was changed our Tam Coc Trip (4 days – 3 nights).

We had agreed to start our Halong Bay Cruise one day earlier  without realising that it would be cut one night short. Typhoon Mangult was touching down in Vietnam and all Halong Bay Cruise boats had to get back to shore so Vani of Lily Travel Agency advised us to start our cruise one day earlier. It was only when we were waiting at our hotel reception area to be picked up for the Halong cruise transfer that we found out  while chit-chat-ing with the receptionist that all cruise boats would have to return to shore the next day. This meant we would have only ONE night on the cruise!

We quickly called Vani and informed her we wanted a two-nights cruise so after some discussion the solution was to start our Tam Coc trip (4 days – 3 nights) immediately and then the Halong Bay cruise later. By then Typhoon Mangkult would have blown over.

So today became a “transfer – day” –  from Hanoi to Tam Coc. We expected to be in Tam Coc between 2pm to 4 pm.  We did not plan for any sightseeing just a walk near the vicinity of our hotels.

By End of the Day
The last minute changes to leave for Tam Coc instead of Halong Bay Cruise went smoothly. Vani postponed our Halong Bay Cruise to 5 days later and arranged for a Hanoi-Tam Coc transfer. We reached Tam Coc at about 2 pm and spent the rest of the day exploring Bich Dong Pagoda which was practically beside our stay.  The scenery outside our stay was also more beautiful than we expected.

We loved the breakfast at Amorita Boutique. There was a huge variety on the buffet table with fruits like banana, grapes, melon, guava and etc. There were ham, bread, tomato etc etc. Looking a the beautiful spread we felt pampered.

The staff that sat us down at the table gave us a menu and told us that we could ordered anything in it to supplement the food on the buffet table and we did not have to pay extra. The menu had western breakfast, all kinds of eggs (fried, hardboiled etc), hot drinks and juices. Wow! 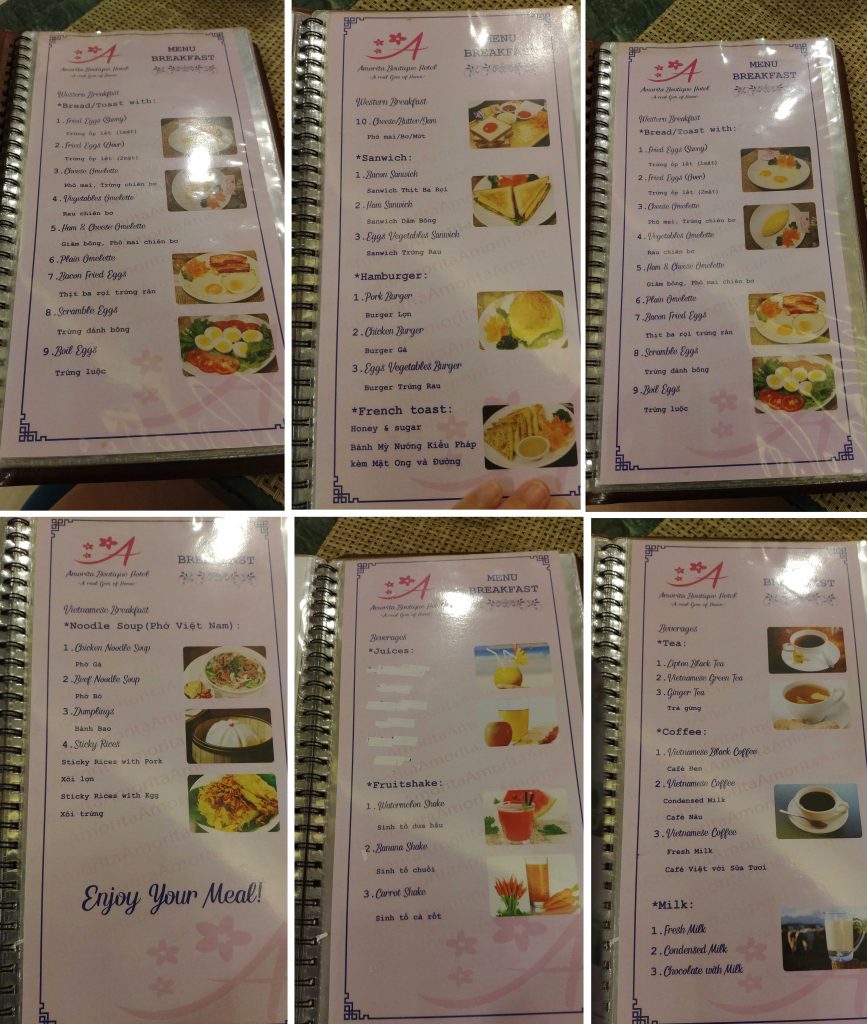 Order anything on the breakfast menu for no extra charges

getting from Hanoi to Tam Coc

We had arranged with Lily Travel Agency put us on a VIP-Limousine Van (8 passengers) to transfer us from Hanoi to Tam Coc. The ride per person was USD13 one way. A “runner” came to our hotel to pick us up. He put us and our luggage into a taxis and directed the taxis to take us somewhere. After about 15 minutes ride passing through the chaotic roads of Hanoi we reached a “place” where we were transferred onto a VIP-Limousine Van. The van had four individual seats, two in a row with an alley in the center. There was a row of three seaters right behind and the last (eighth) passenger seat was beside the driver. 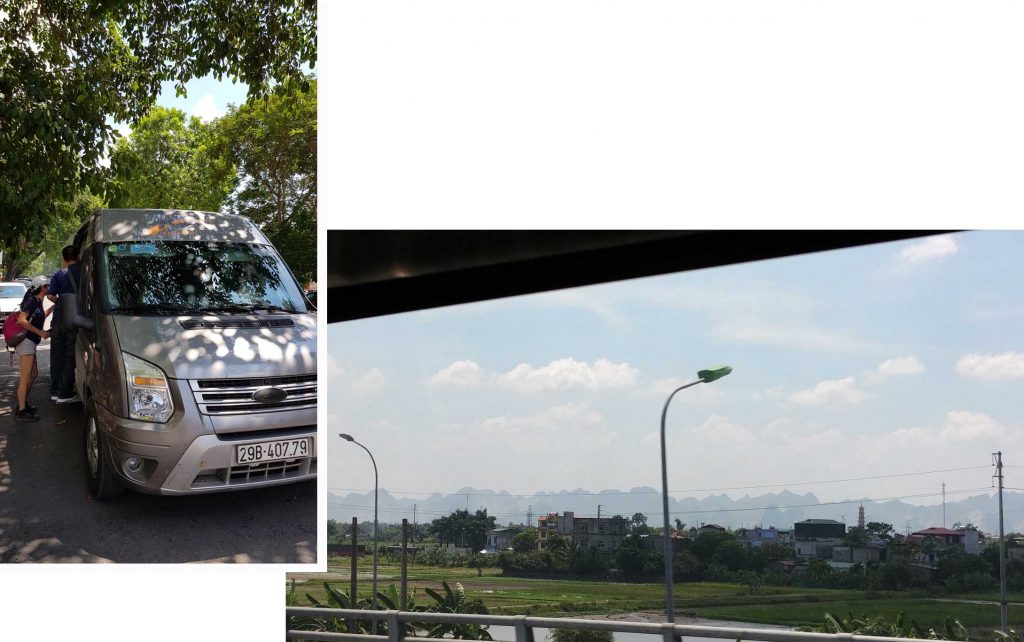 Our VIP Limousine to Tam Coc

On the van each passenger was given a bottle of mineral water. The journey was about 102 km and took 2 hours. Before reaching Tam Coc the van stopped at Ninh Binh Town and four of the passengers alighted. The van drove for another 7 km to Tam Coc and two passengers alighted in the town. We showed the driver the address to our “stay” in Tam Coc and he drove anther 2.8km to the gate of our hotel. 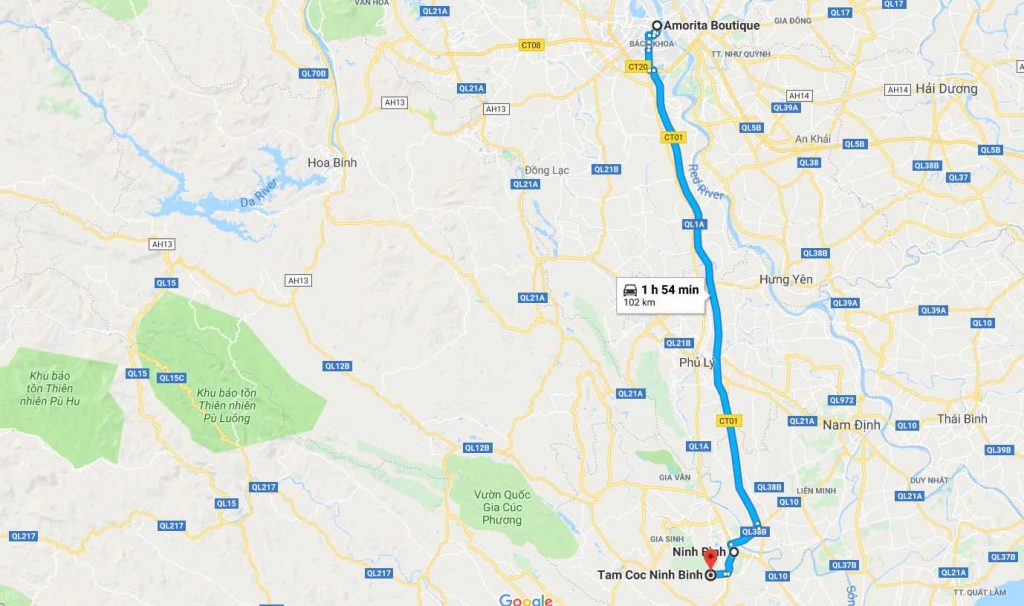 Route from Hanoi to Tam Coc

We chosed to stay in Tam Coc rather than Ninh Binh Town because Tam Coc was smaller, less busy and more scenic. Outside our hotel was a big pond and two gigantic  “hills” and the scenery was magnificent at sunset. 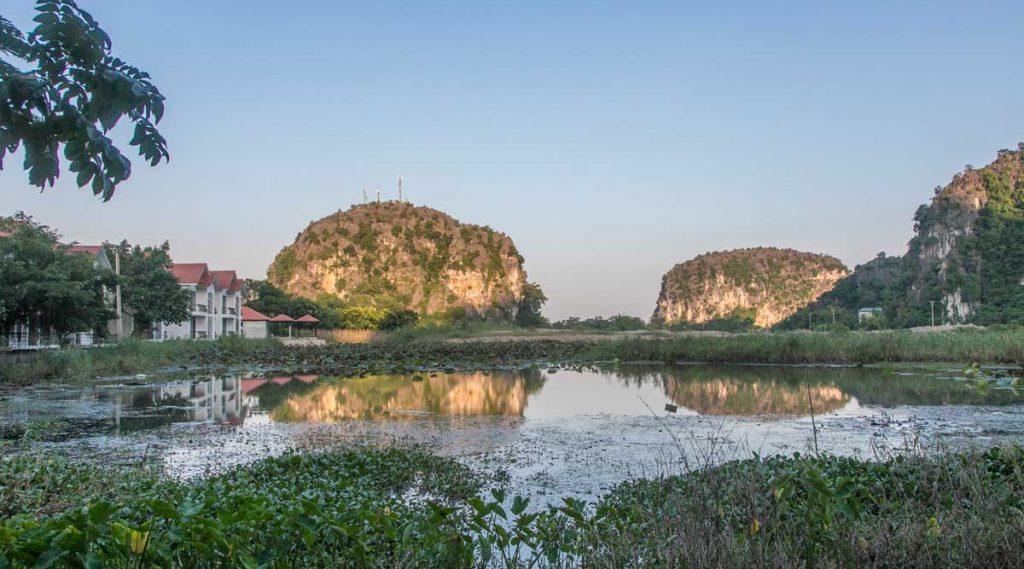 Sunset view just outside our hotel

We reached our hotel in Tam Coc at about 2 pm, after checking in and resting for a short while it was about 3 pm. The rest to the day was too short to go anywhere far so we decided to explore Bich Dong Pagoda which was near the hotel vicinity. It was a 5 minutes walk from our hotel to Bich Dong Pagoda. 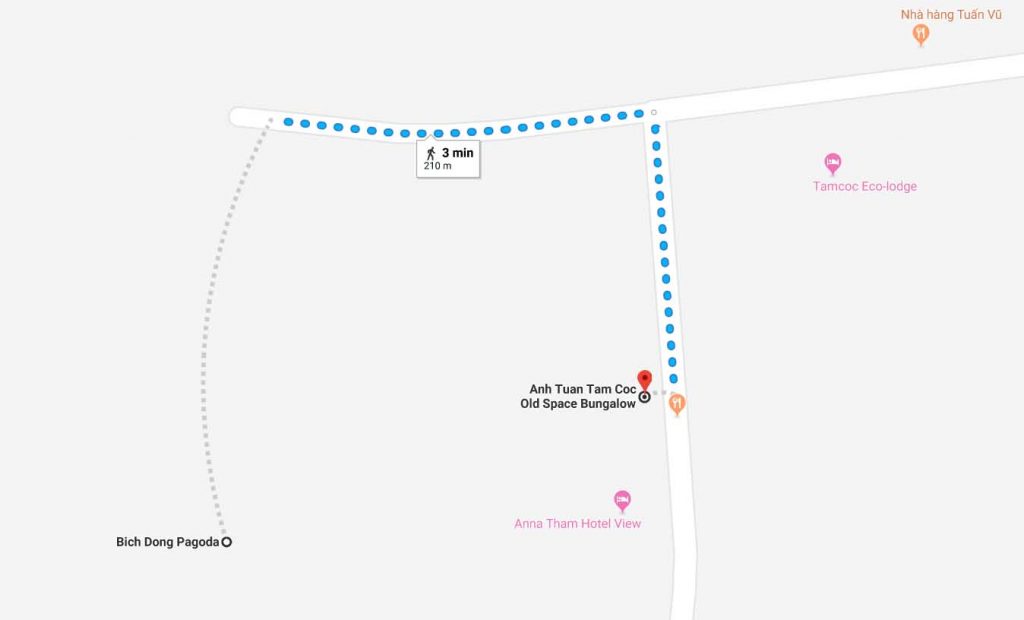 Bich Dong Pagoda was not about one particular pagoda, it was a name given to the entire area which involved many structures allocated from the base of Bich Dong Mountain to mid level to the peak. Interestingly none of the structures looked like the pagoda we were familiar with. The structures at the base were known as lower pagoda and those at mid level called middle pagoda and the one at the peak higher pagoda.

At the base of “Bich Dong Pagoda” was a huge lotus pond and a walkway led to a very ancient looking entrance. There was no charge for entry into Bich Dong Pagoda. 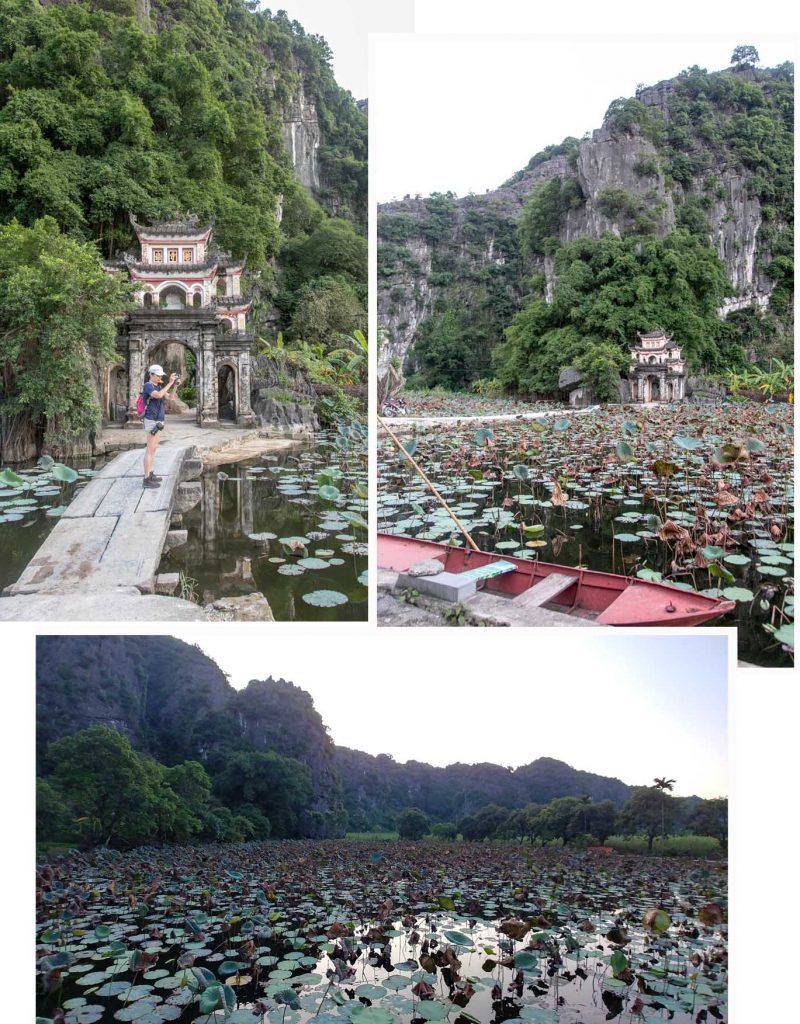 Bich Dong Pagoda was built by two monks name Tri Kien and Tri The who were propagating Buddhism and they went many places to build temples. They found the terrain and landscapes in Bich Dong Mountain beautiful hence they built Bich Dong pagoda.

From the base we went up about 100 steps which brought us to the mid level. We passed a couple of the buildings and they looked very old. 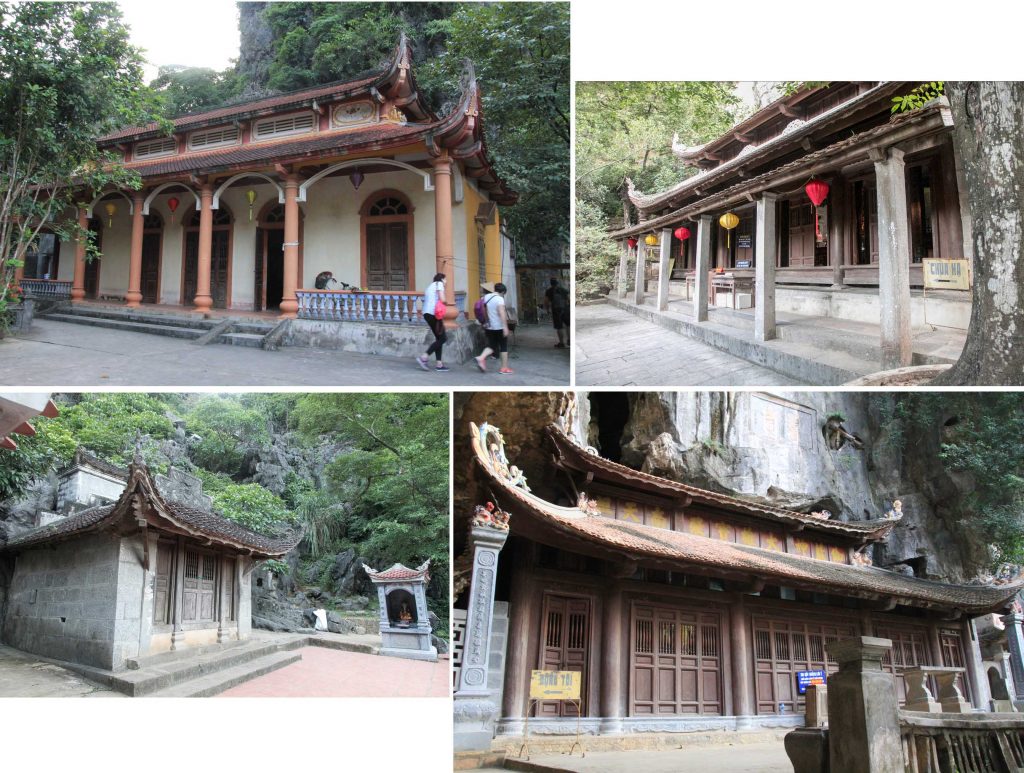 Behind one of the old buildings there was a cave and entering the cave was the only way to go further up to the top. The cave was dimly lighted and we saw a pavillion in it. We walked up a high concrete stairs before we saw the cave exit. 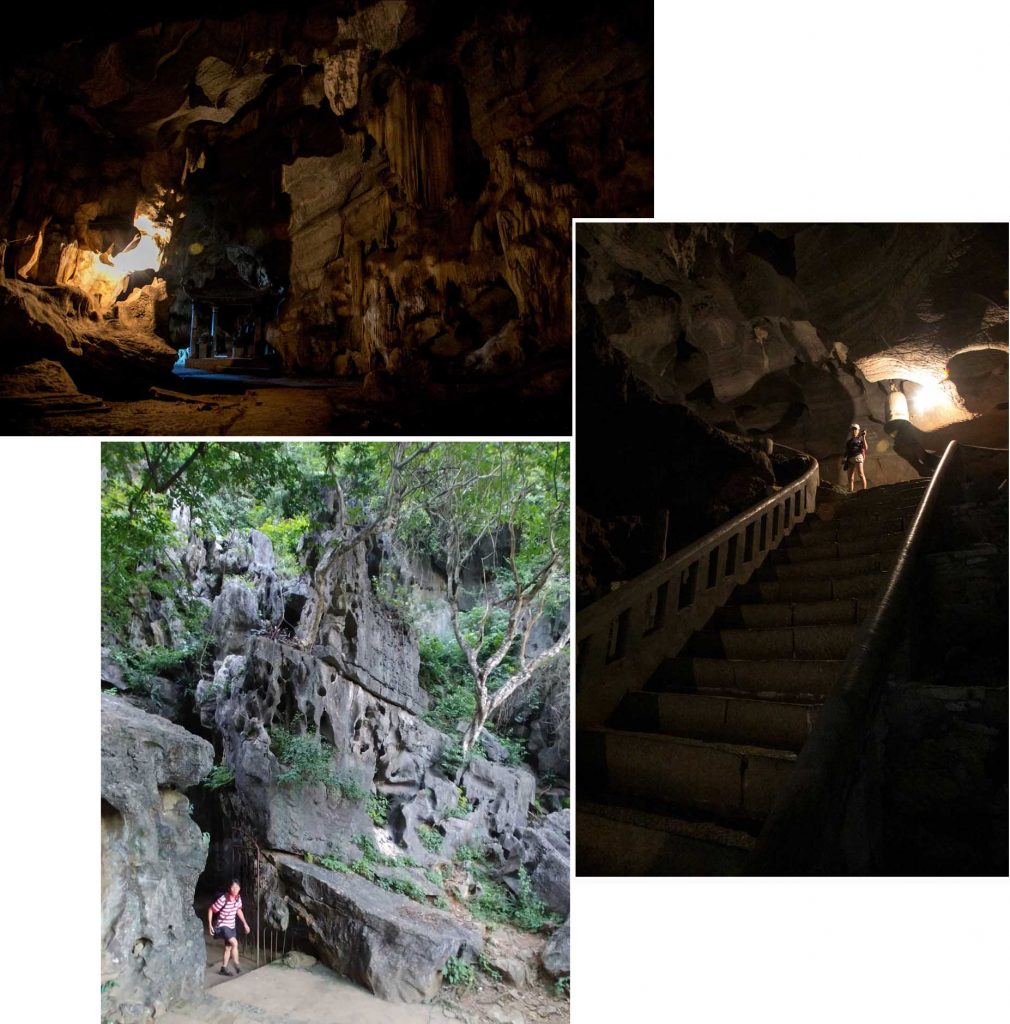 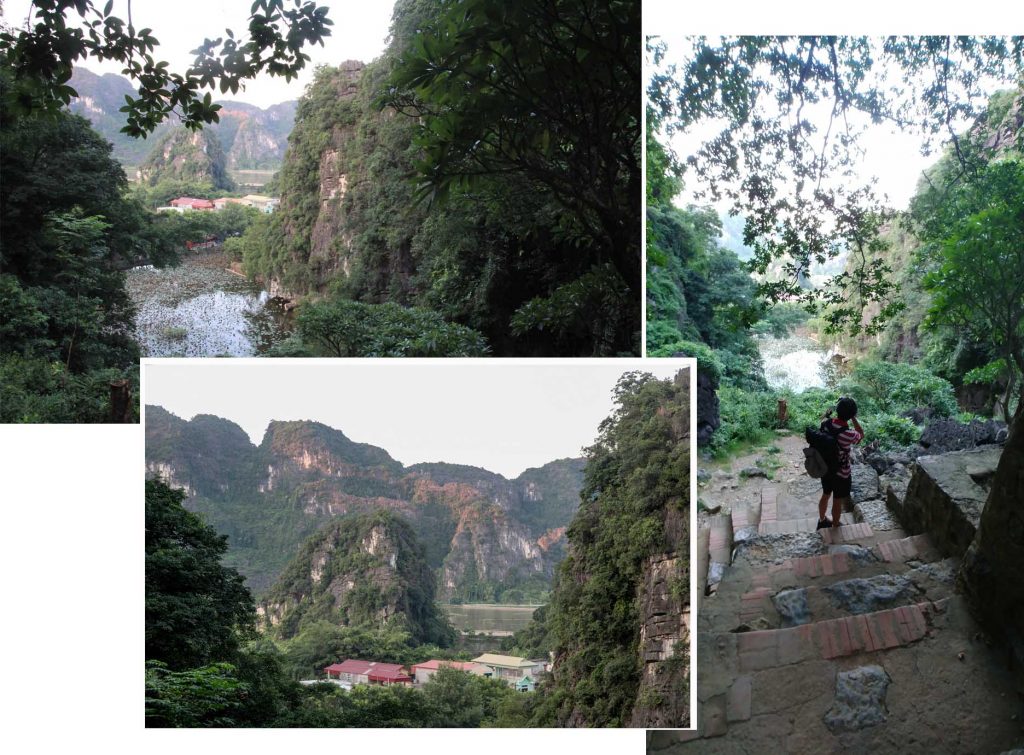 We were back at the base of Bich Dong Pagoda when we saw a group of tourists and their guide. From the slangs in their speeches we could guess that they were Taiwanese. The guide had arranged for “buffalo ride” for his customers. 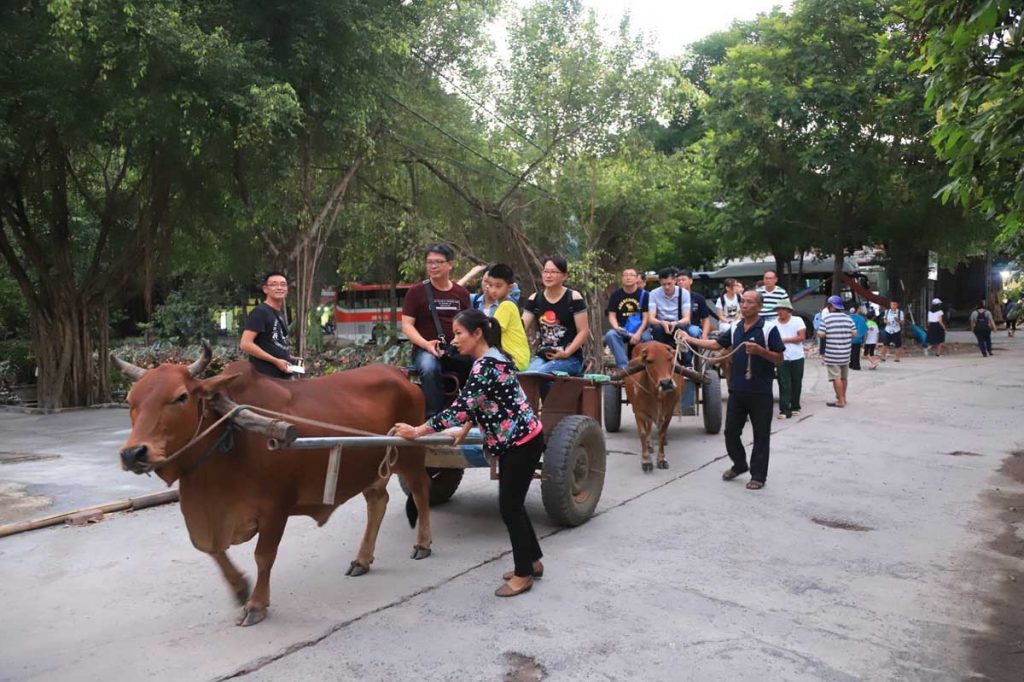 Accommodation for the next Three nights

I booked “Anh Tuan Tam Coc Old Space Bungalow” for three nights.  It was a relatively new hotel completed not more than six months ago. It came wth ensuite itoilet and breakfast. The cost for three nights was vnd1848000(usd80.0,  sgd109) and we booked it at booking.com.

Our room was huge and interestingly designed. The furnishing was made from bamboo and the room looked both modern and rustic.

The ensuite toilet was also very large, clean and modern with a rustic twist. Our host was a very creative person, the wall mirror in the toilet had a bicycle tyre as its rim and the wash basin sat on a car tyre!

The “bungalow” units at the hotel half surrounded a center outdoor relaxing area. We especially like this outdoor area and found it a great place to relax at anytime of the day. For the next three days whenever we were in our hotel we rather spent our time in this outdoor area which was also a  pouch/cafe/dining area than in our room.

For the first evening we ate dinner at a nearby restaurant. For three dishes and rice the cost came up to vnd150000(usd6.40, sgd9.00). For the next two evenings we ate at our hotel, our male host was the chef and dinner was served in the outdoor area/pouch/cafe/dining area. Our host was a friendly man he gave us one dinner treat so we paid only for the 2nd dinner which cost about vnd285000(usd12.00, sgd16.50). it consisted of three dishes and rice. 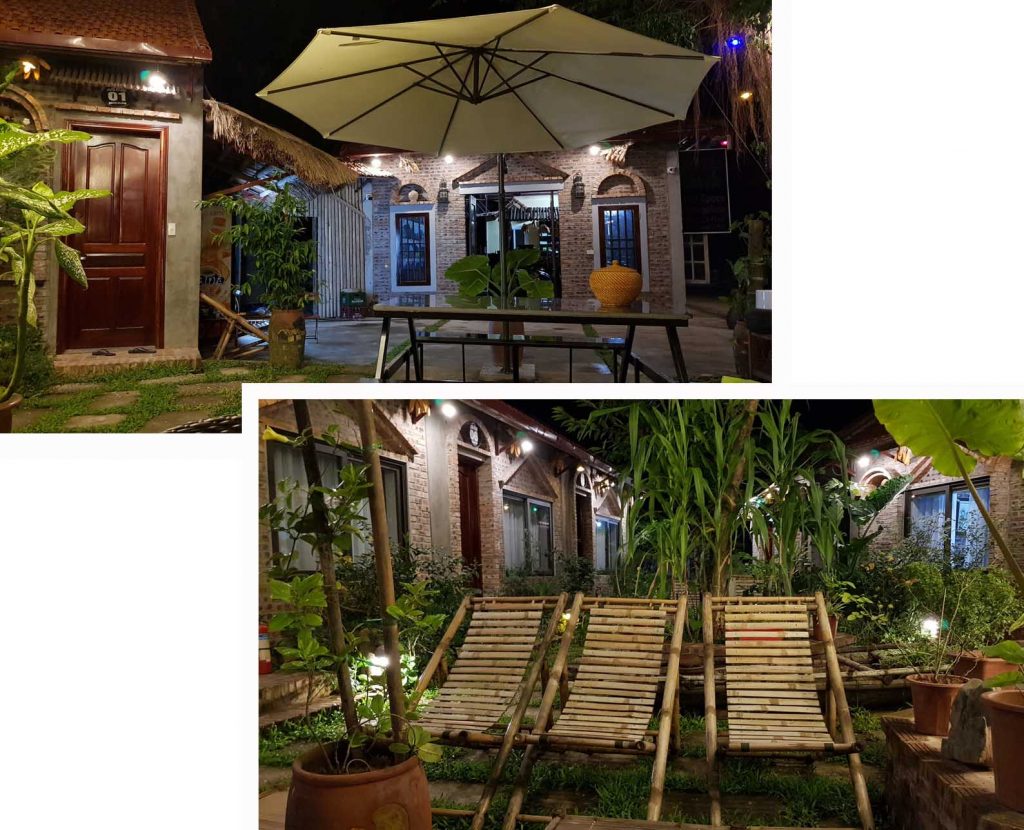