But after some discussion with our host we decided that each day we would do a slow and easy trip to one destination and for the rest of the day we would just chill and relax. So we dropped Trang An Boat ride and Hoa Lu ancient capital. 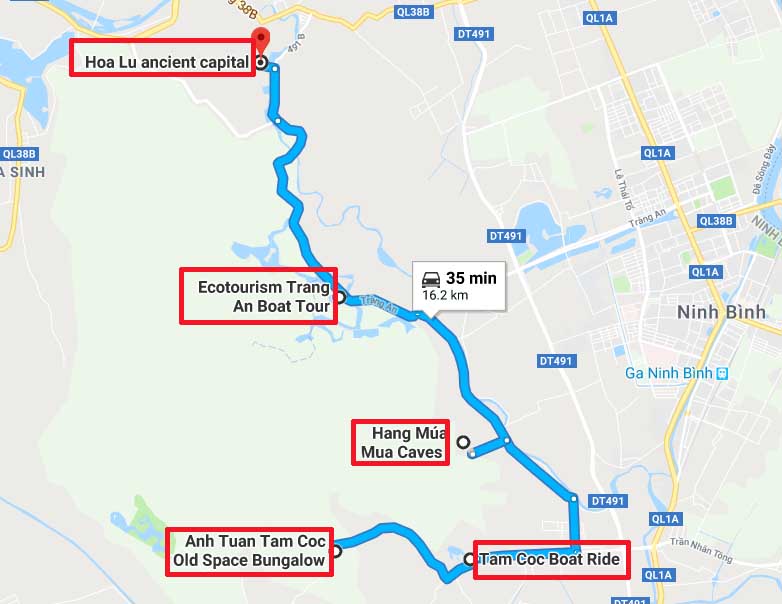 By end of the two days
We were glad that we only visited one destination for each of the two days. The weather was pretty hot so to be able to  explore relaxingly and to break as often to cool down made the trip more enjoyable. Mua Caves was not much of a cave but a cliff, very high very gigantic and impressive. Tam Coc Boat ride was enjoyable and the scenery was nice.

Overall we were still disappointed with Tam Coc, we had expected huge expense of bright yellow paddy fields but saw none. The “golden” scenery was nowhere to be seen. Had we came in the wrong month? 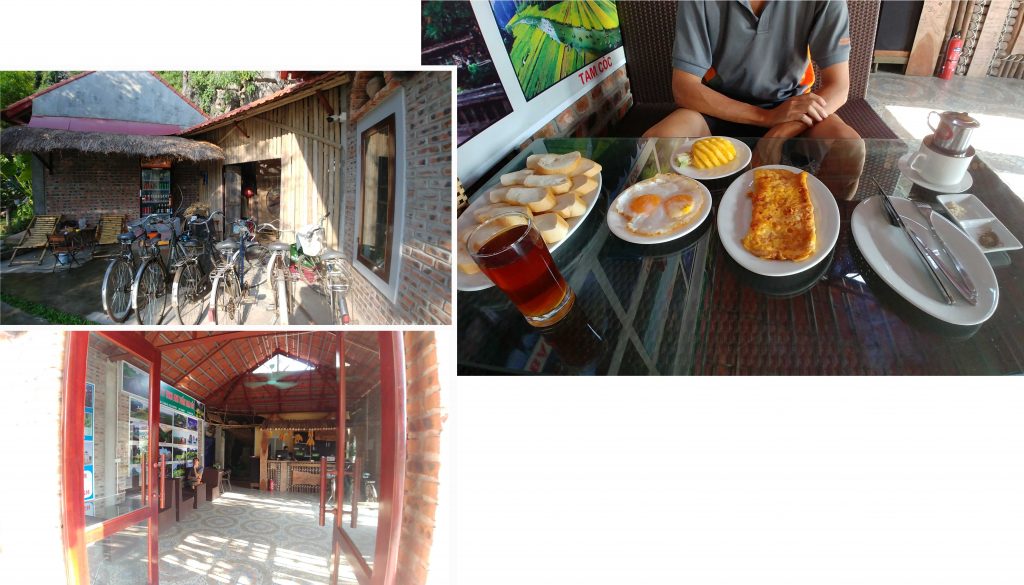 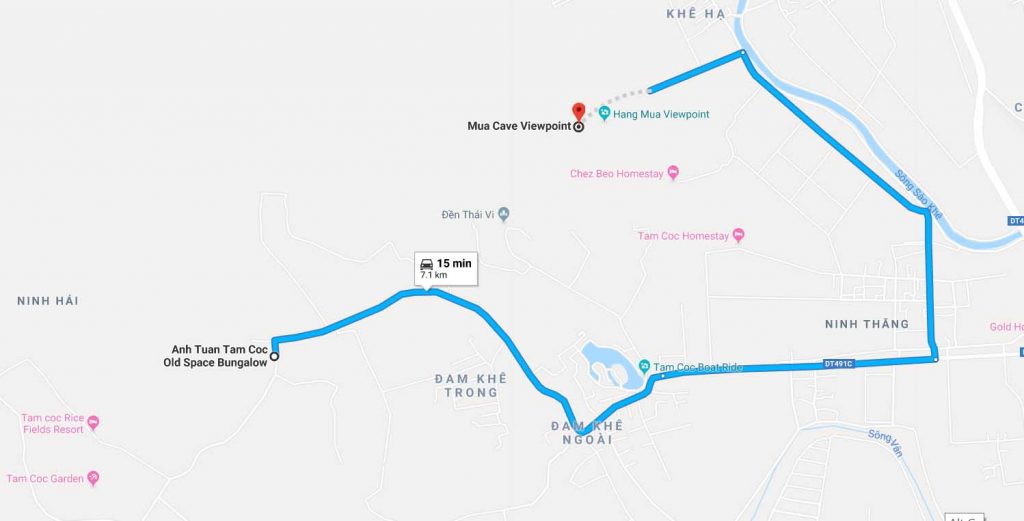 Route from hotel to Mua Cave

Our driver drove us right to the gate of the Mua Caves compound and directed us to the ticketing counter. We exchanged phone numbers and agreed to meet again 3 hours later at the same place. 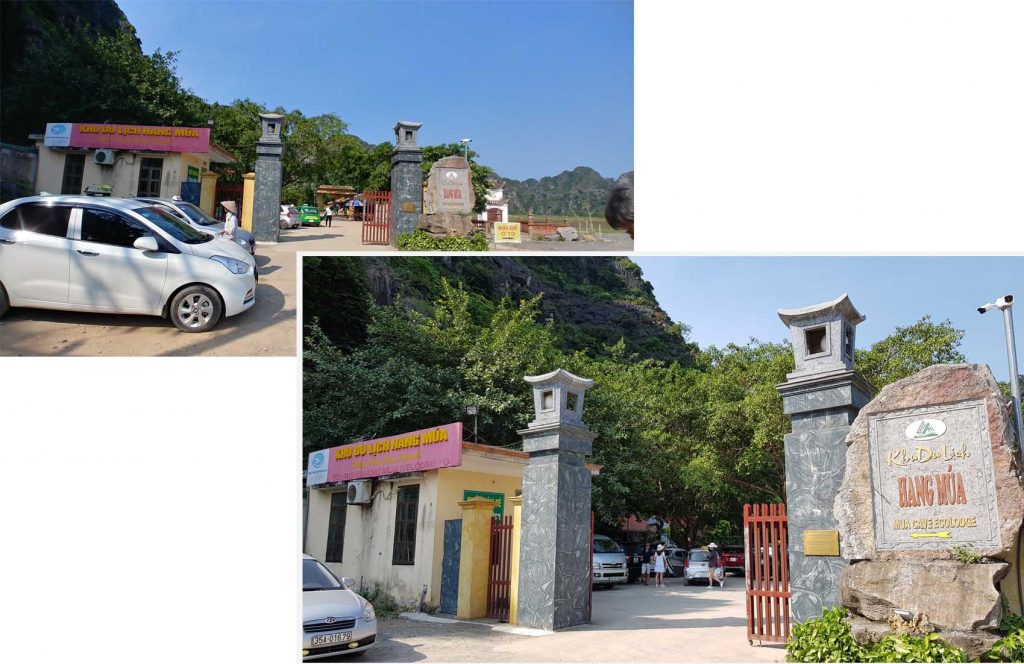 We bought our entry ticket at vnd100000 (usd4.30 ,sgd6.0) per person. The ticketing staff to told us that trekking to the top would take about 45 minutes one way. Trekking up…so the caves were on at the peak? 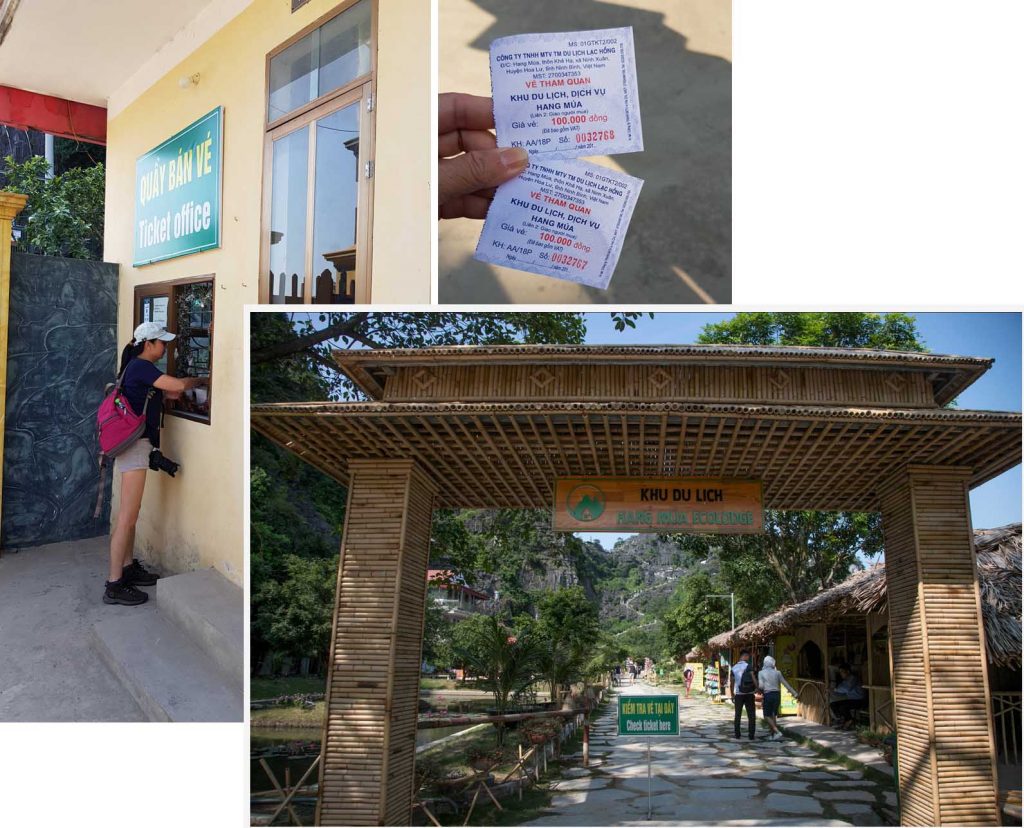 Getting our entry ticket to Mua CaveA

After the entrance we walked into a big compound, inside were a few bungalow hostels, restaurant (not in operation yet) and a large pond. 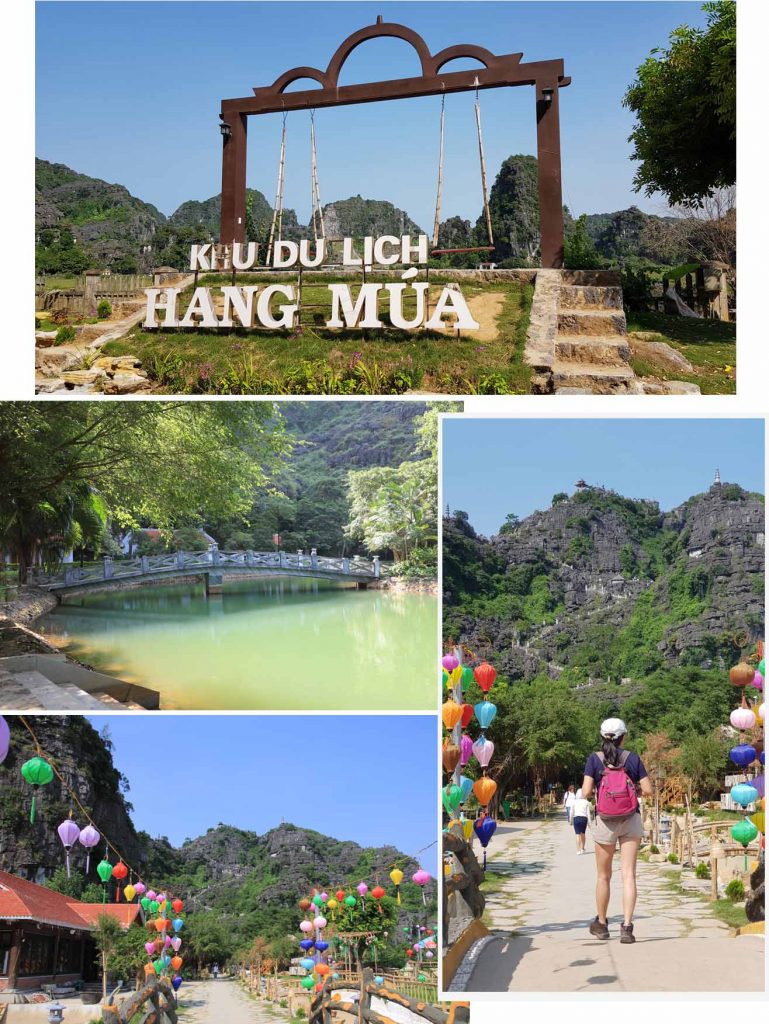 Then we came to the start of a long stairs that zigzag up to the peak. We could see a pagoda and a pavilion sitting high up on the peak. Everybody were walking up the stairs so that must be the way. We saw a small cave with a tiger statue standing at its entrance. The cave was small and shallow and not one for exploration. 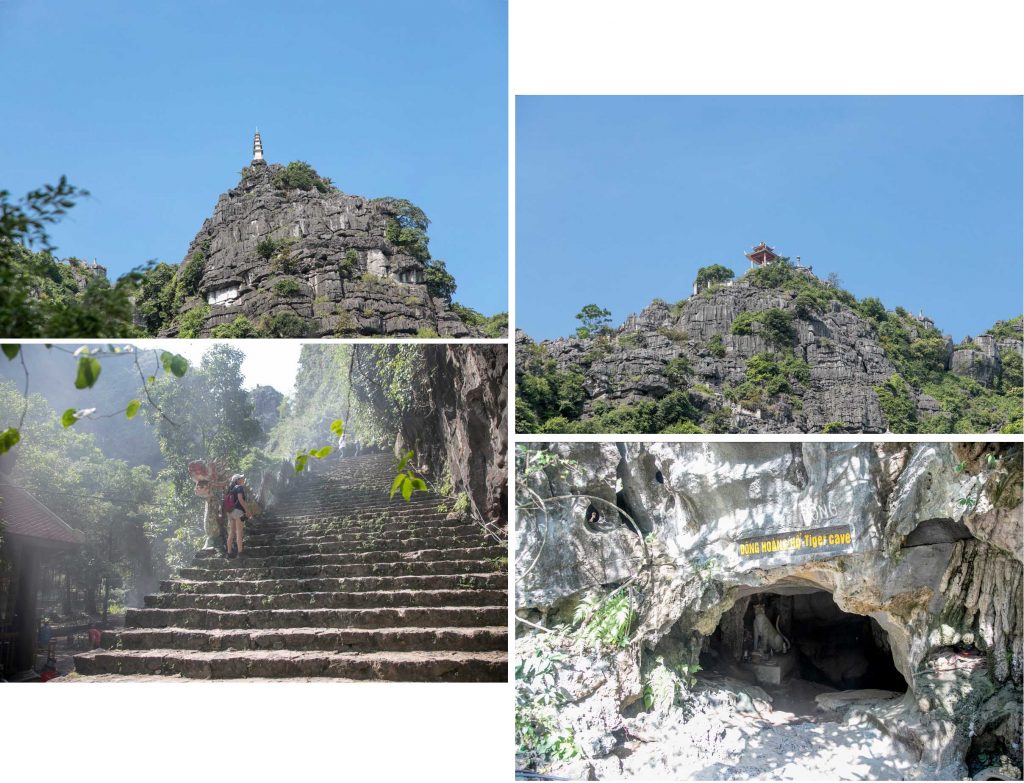 Going up the cliff

The higher we climbed the farther we could see and soon we could see the entire pond that was at the base of the cliff and higher up we were able to see the fields and beyond. It looked like we came to Tam Coc too late as most of the fields were harvested and were in the new planting stage.

Midway after about 20 minutes into our climb we reached a intersection of two branches. The right branch went up to one peak where the pagoda stood and the left branch went up another peak where the pavilion stood. We took the right branch heading toward the Pagoda, the climb was steps and steps and more steps. Near the top there were a couple of scenic viewpoints that gave us a 360° panoramic view of the entire place. 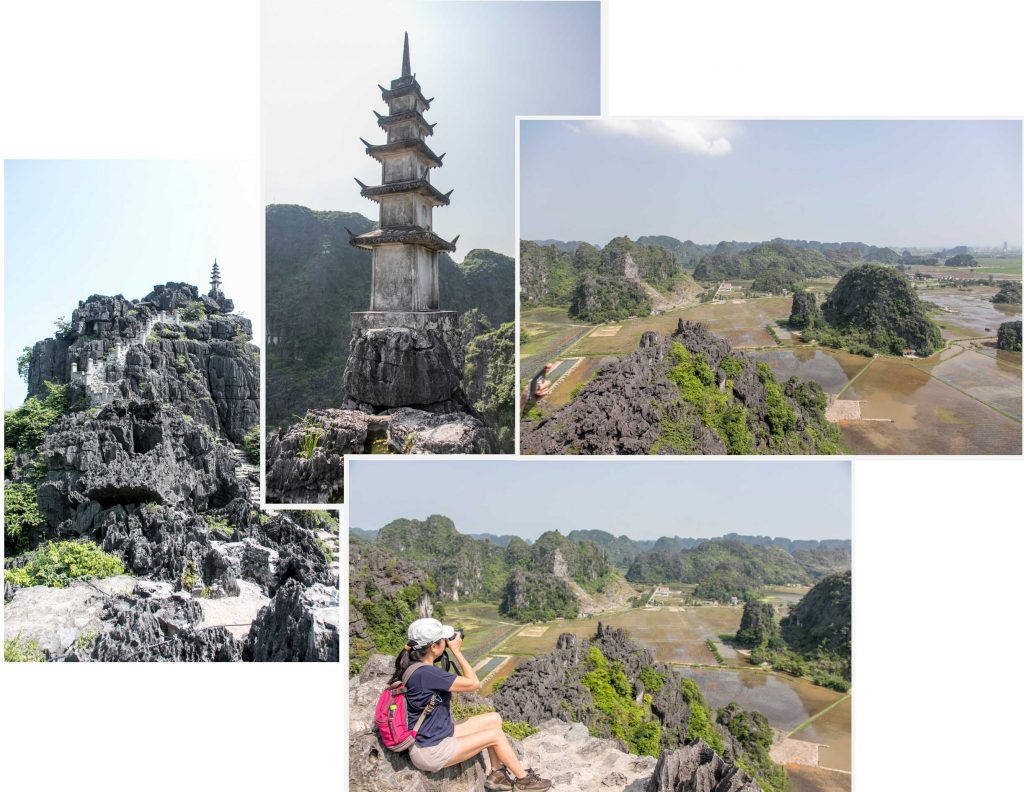 One of the Peaks at Hang Mua

After the right branch we went up the left branch which was another steep climb. Before reaching the top we saw a huge Chinese dragon statue at the top. A long dragon with nine “arcs” from head to tail. 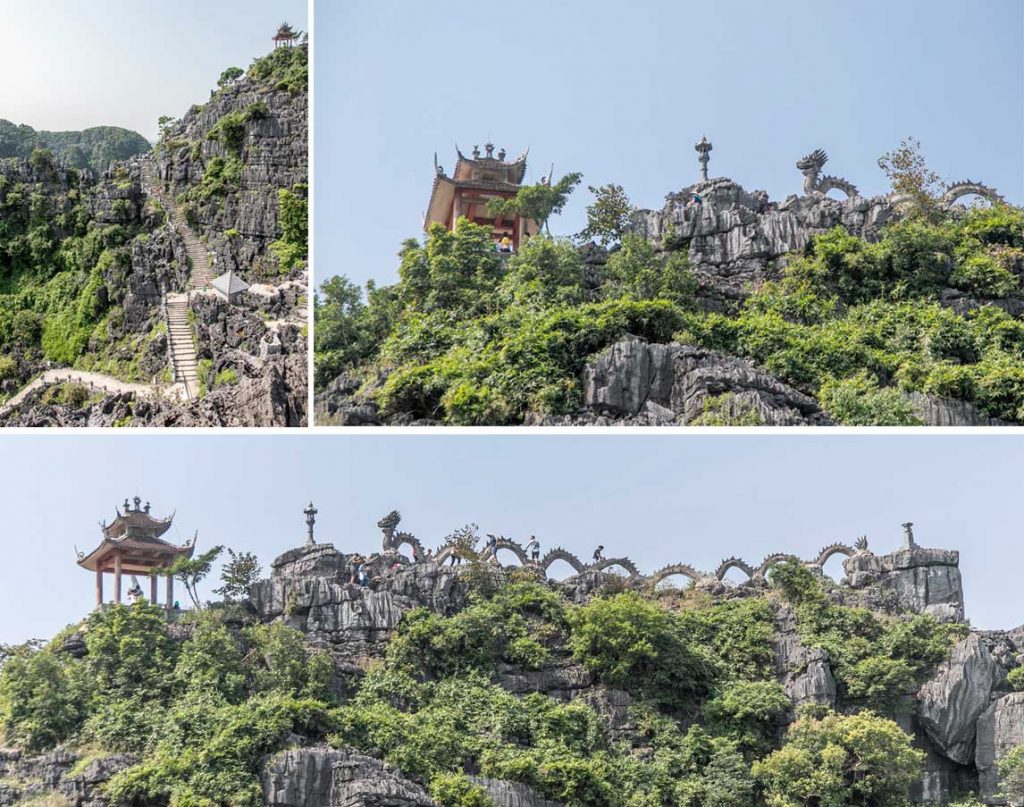 Pavilion and Chinese dragon on another peak at Hang Mua

After 15 minutes of slow climbed we reached the peak. The pavilion actually housed  a statue of the Goddess of Mercy.  There were many visitors sitting on the floor of the pavilion resting from the steep climb and the hot sun. The “nine-arcs” dragon was constructed on a ridge with steep and rocky drop on both sides. There was no path to walk along the sides of the dragon.

Near the peak was a good viewpoint of the valley below. We could see tiny row boats in the water channel gliding through. 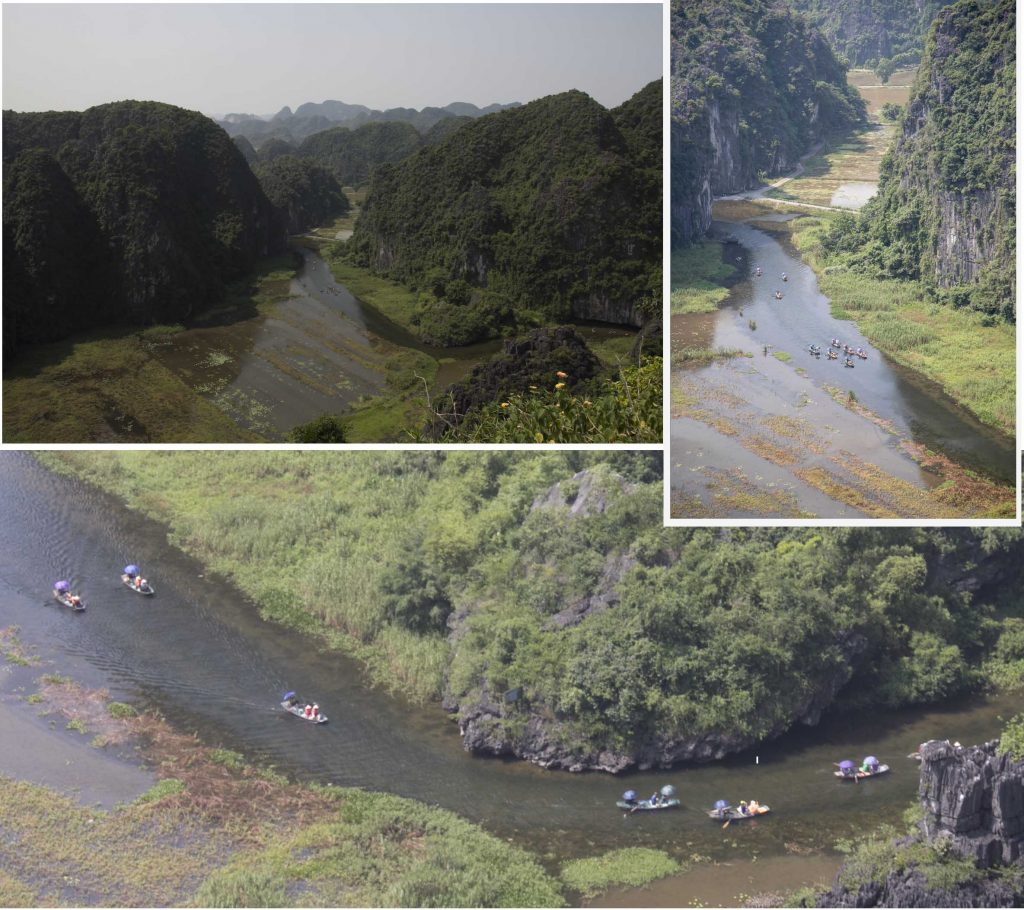 We were back to the base of Mua Caves at about 11am. Coming down was much faster and easier than going up. Besides the small “tiger cave” near the base of the cliffs/mountains there was no other cave! So why was this place call Mua Caves??

We stopped at a cafe near the big pond after we came down from Mua Cave and ordered a cup of tea and a coconut drink. The cost was vnd40000(usd1.70,sgd2.40). Before we could fully relax our taxis driver called and told us he had arrived (30 minutes early)! 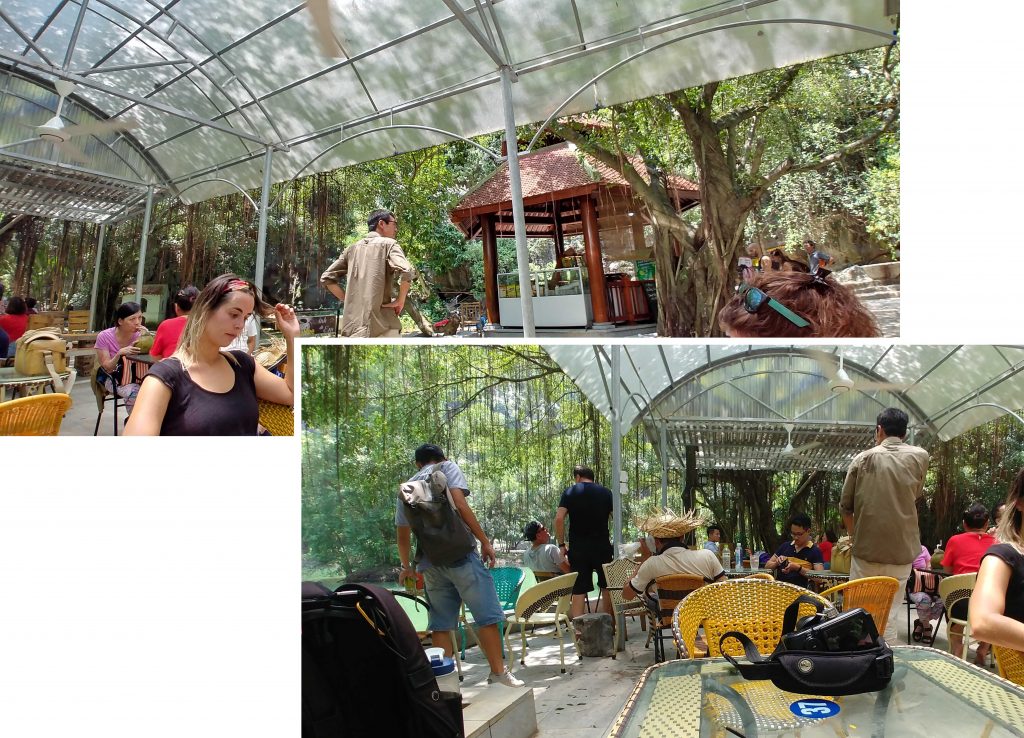 Cafe at Mua Cave (beside the pond)

It was noon when we left Mua Caves, it was too early to go back to our hotel so we told our taxis driver to let us down at Tam Coc Town near the Tam Coc Boat ride jetty. Tam Coc jetty was midway between Cave and our hotel. The taxis fee was vnd10000 (usd4.30 ,sgd6.0) 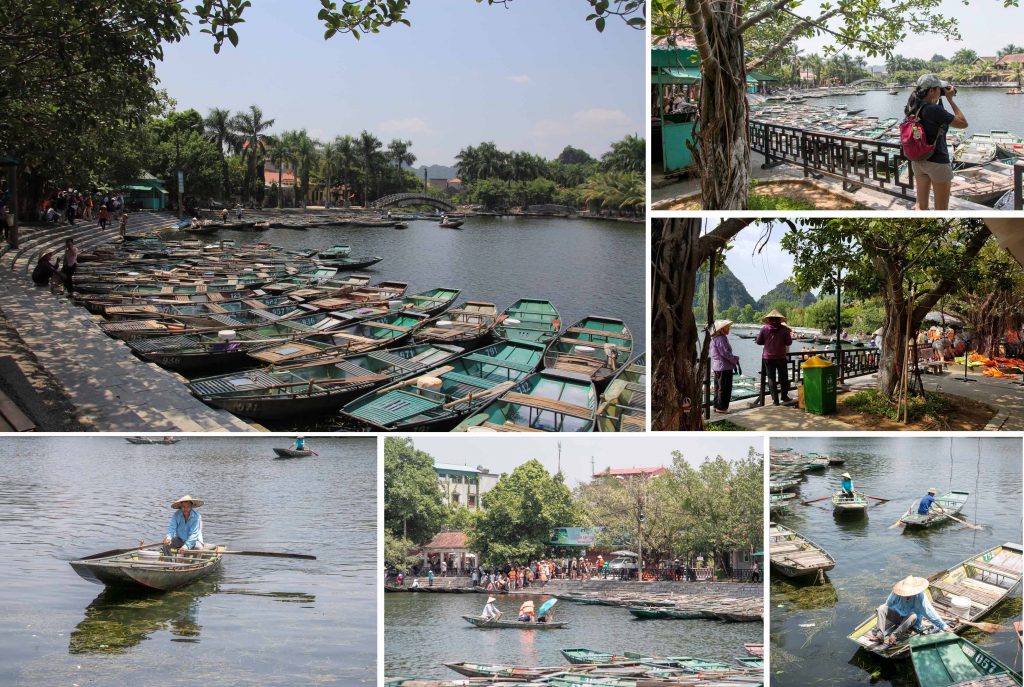 We explored the path that bordered the lake. Along the path were hotels/hostels and definitely looked like a great place to live in Tam Coc. Being beside by the lake had a great advantage, it would be so pleasant to see the many row-boats going by. 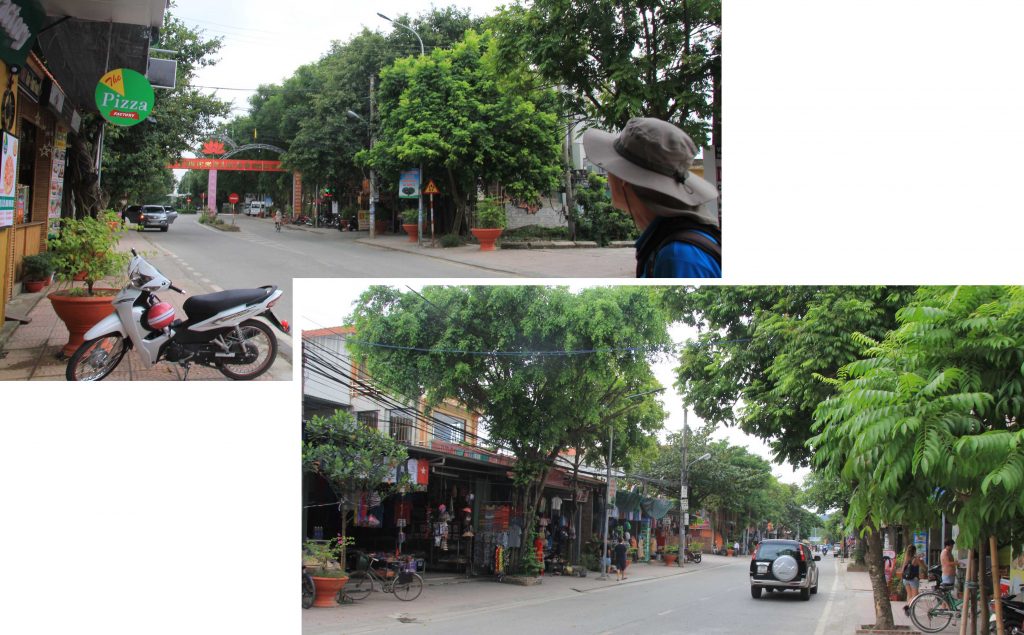 Tam Coc Town was pretty small. There were many shops selling sportwears and bags. The prices were even cheaper than the same stuffs in Hanoi. 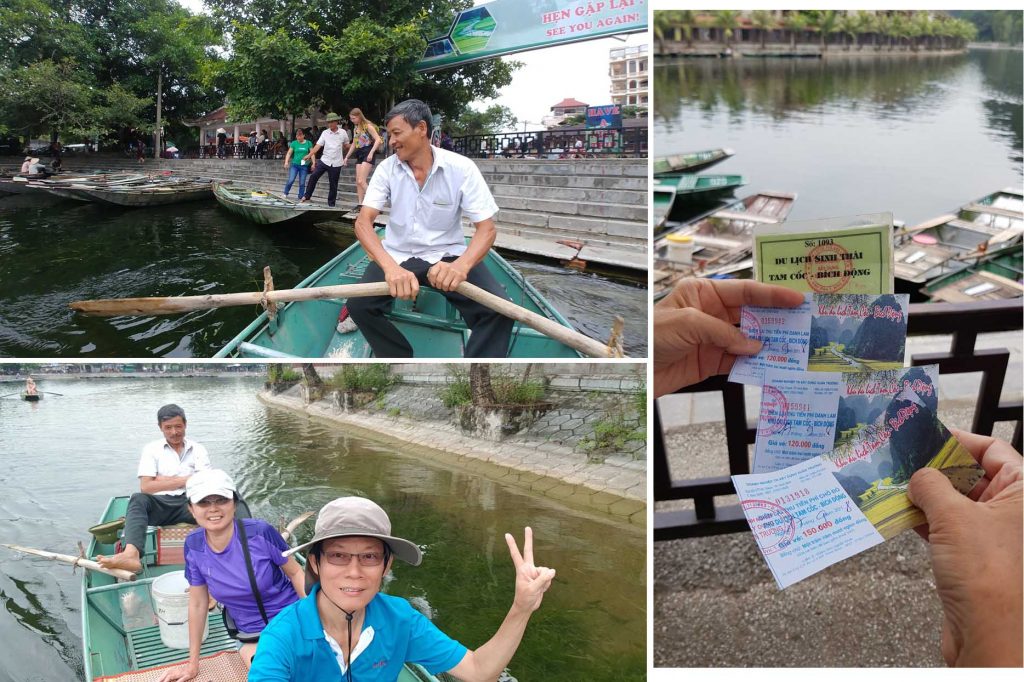 The entire boat trip was one and a half hour. 45 minutes to somewhere and then another 45 minutes back to Tam Coc Jetty. Like many other boat rowers, our “uncle” who was at the start rowed the boat using his hands soon switch to using his feet. It was amazing how his feet needed no hooking mechanism to the paddles and easily manipulated the paddles as our boat glided forward. 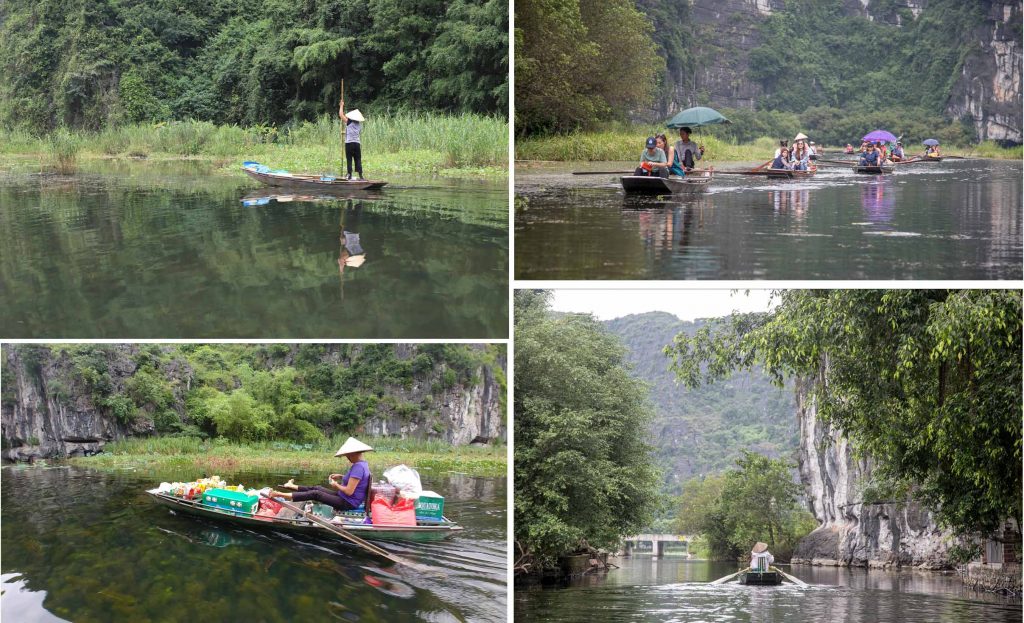 Soon our boat came to a section where we could see the “nine arcs” dragon on Mua Caves high up on the cliff. This time instead of standing up on the cliff and looking down into the water channel we were in a boat looking up. 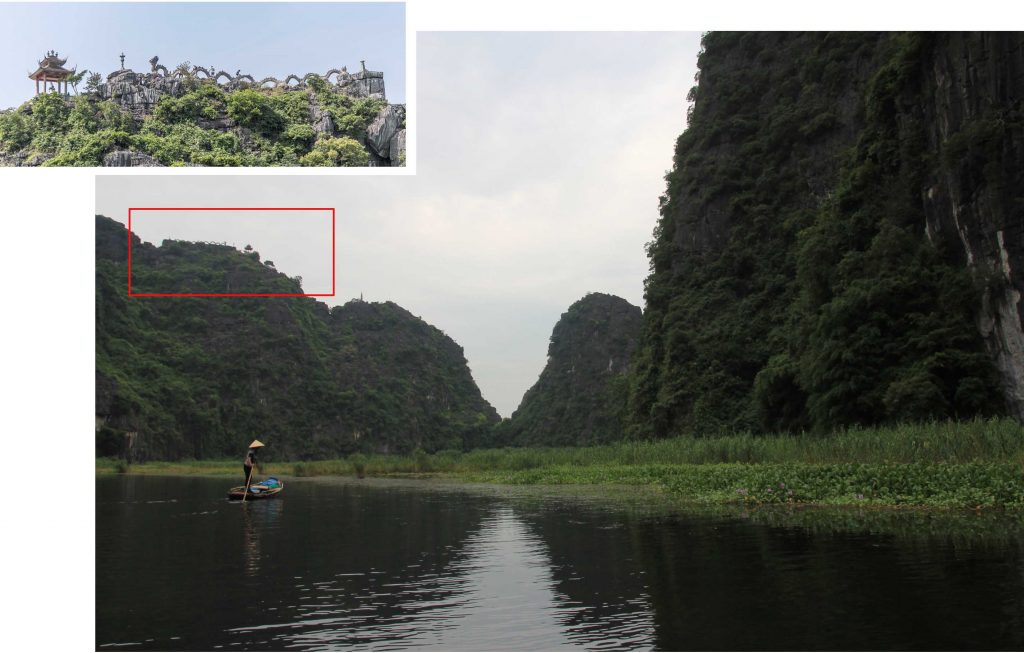 Cave Mua and it dragon on the cliff

The scenery of Tam Coc had been compared to Halong Bay, and it was known as Halong Bay on land. We had yet to visit Halong Bay so we were not able to compare. Soon our boat arrived at a opening of a cavern. Our boatman rowed into the cavern and for a while everything was pitch black until we spotted an opening at the other end. When our boat came out on the other end we were in some sort of a round bay. This was apparent the end point of our ride before our boat man turned back. Parked around the bay were several boat ladened with food and drink for sale. 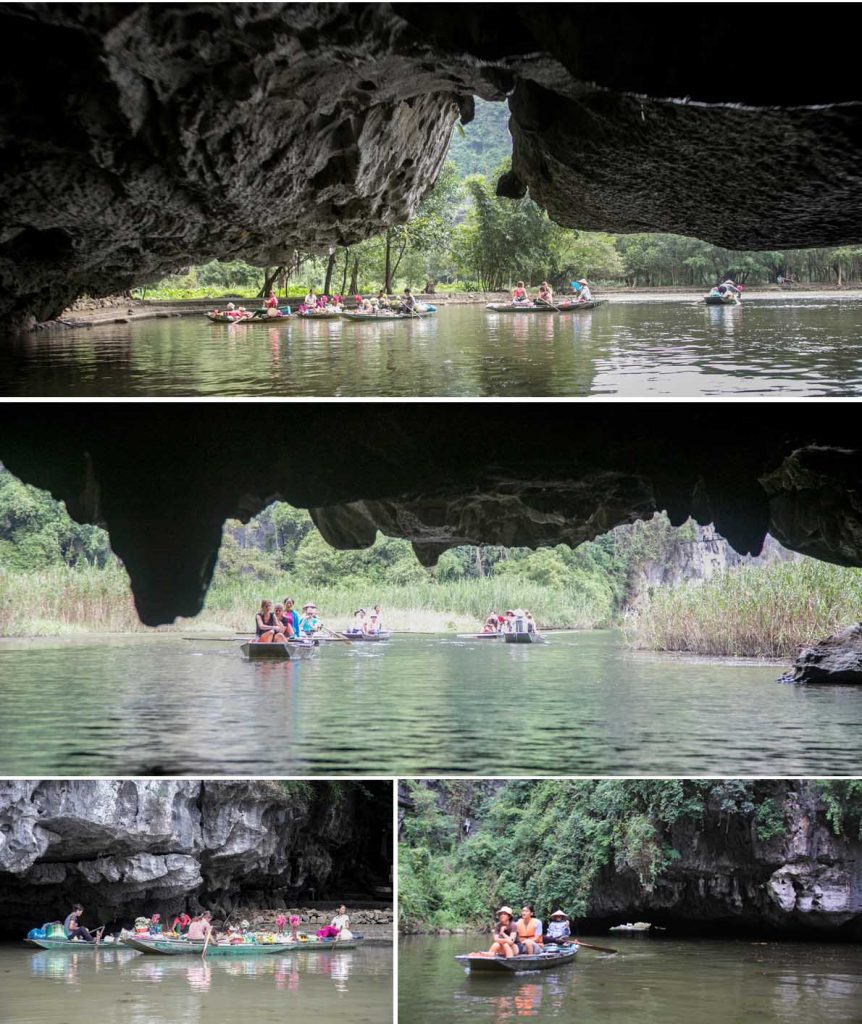 The far end of the boat ride

After about 10 minutes stop our boat man started our trip back. It was about 10 am and the weather was getting hotter. We were glad we started early and avoided the noon heat. With such a huge mass of water body all around us the heat would be intensified. 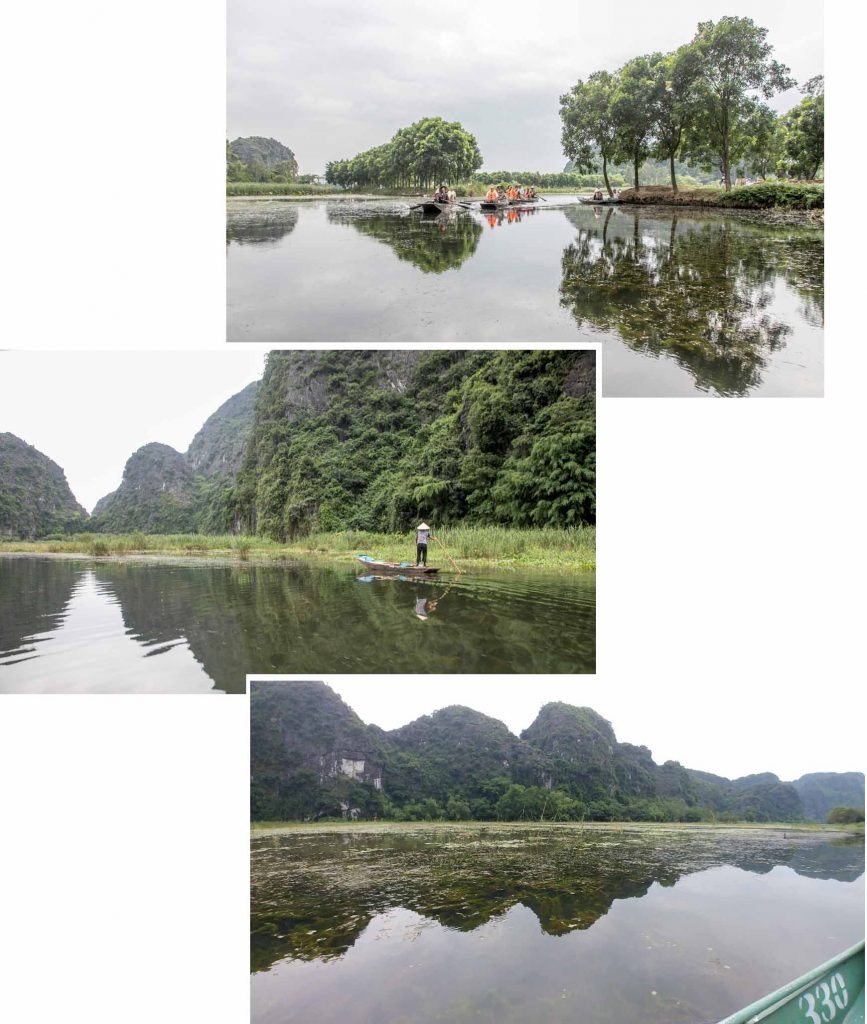 One of the best places to relax was at the porch/cafe outside our room at Anh Tuan Tam Coc Old Space Bungalow. The view was fantastic, the seats, tables  and umbrellas made the pouch so cosy and shady. It was a great place to chill with cups of Vietnamese coffee. The other hotels along the same stretch did not have a cosy pouch like ours. Some customers from those hotel even just came over for coffee breaks and dinner. 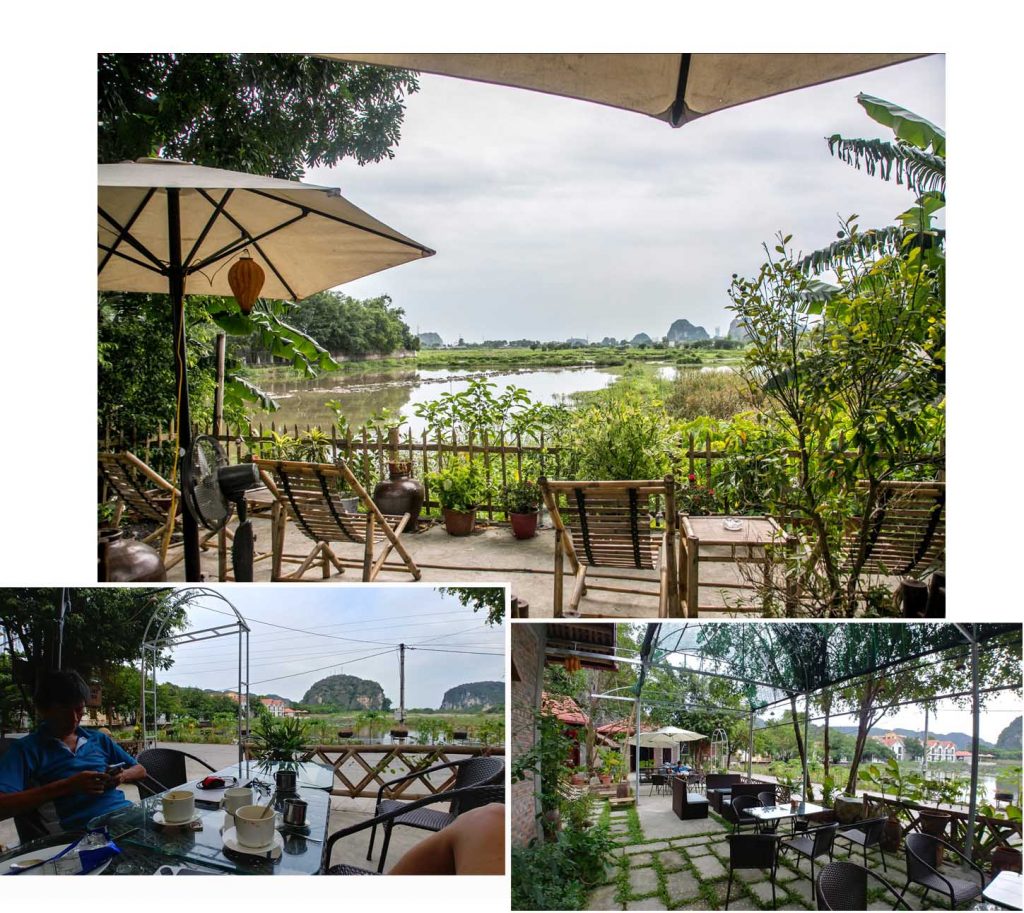 Cosy pouch/cafe outside our unit