We went from Granada to Cordoba. At Cordoba our main focus was Mezquita-Catedral de Cordoba (Mosque Cathedral of Cordoba), this building looked magnificent from the outside but it was its interior that took our breath away. It was so different and unique! After the mosque-cathedral we walked around the old town which was lovely and quaint. 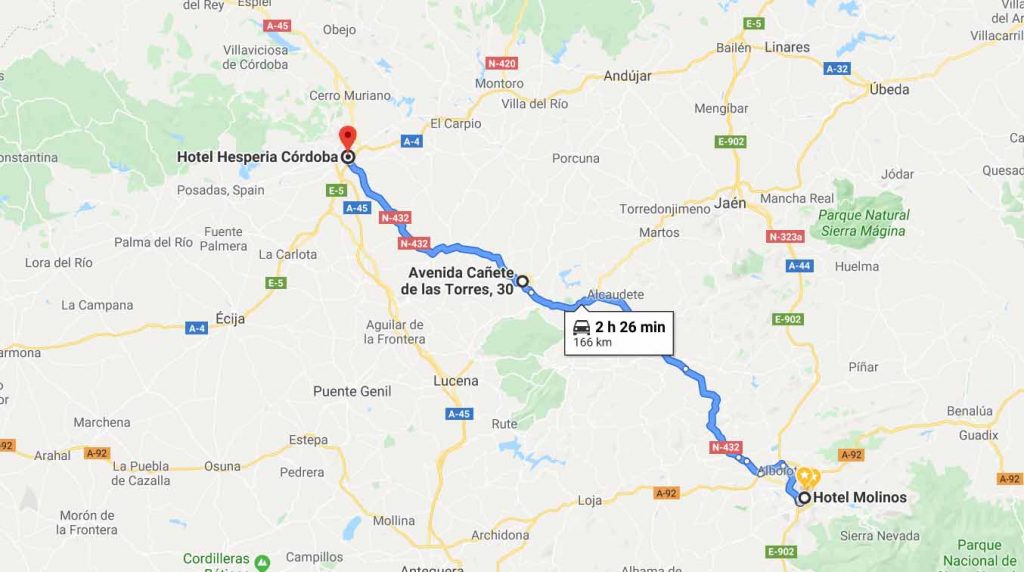 Route from Granada to Cordoba

We left Granada by driving though the town center, (since our car was permitted to be driven in the center), we thought we took the opportunity to see the town. It was a mistake as there were plentiful of traffic stops and beside those places we visited last evening there was nothing very interesting to see. After we left the town center it was a 2.5 hour drive to Cordoba. Midway about 1.5 hour later we detoured into Baena and stopped at a cafe for a coffee break. Baena was a quiet town and the cafe was pretty empty. 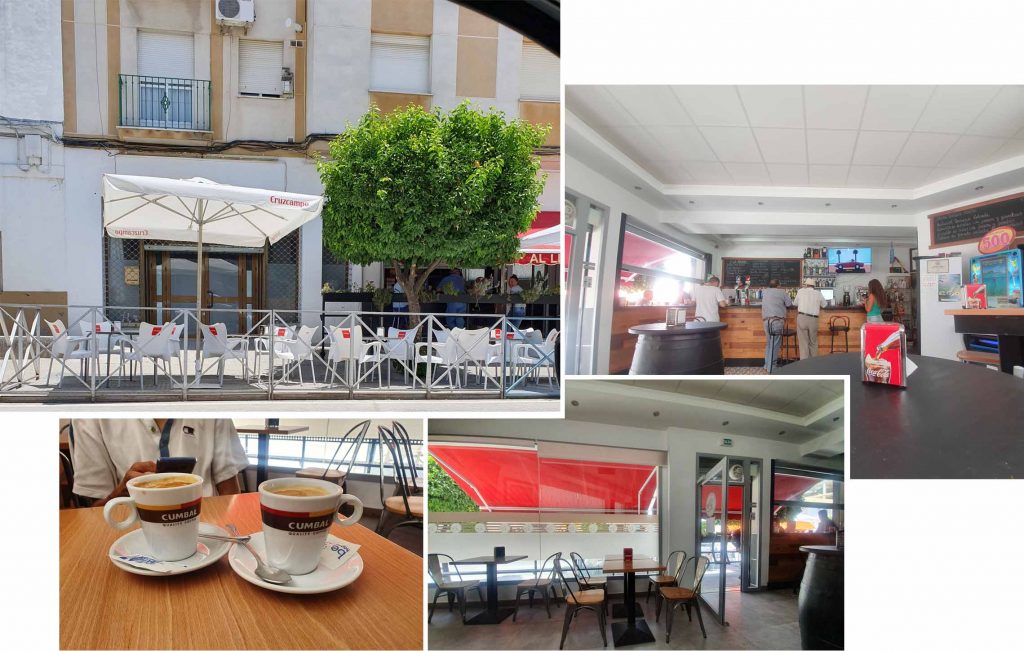 At about 3 pm we reached our “stay” at Cordoba. Our stay was opposite the old town across the river Guadaquivir. It was practically infront of the bridge, Puente Romano de Cordoba (Roman bridge of Cordoba). At 3 pm the sun was still very hot but it was also a great time to take beautiful photos. The sky was so blue and the Mezquita-Catedral de Cordoba at the other end of the bridge stood up prominently and beautifully. The combination of the bridge and the Mezquita-Cathedral created a beautiful scene. 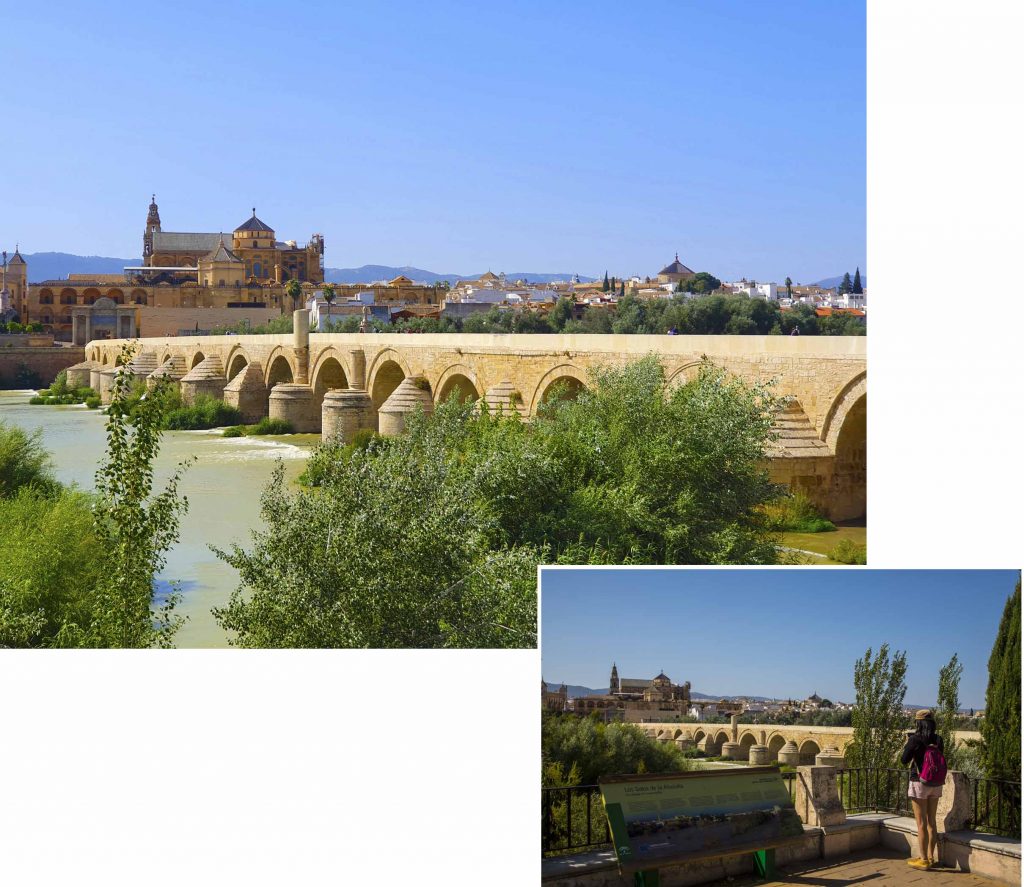 We walked across the bridge to the Cordoba old town. On the bridge was a statue of an angel with a  halo above its head. The angel was Saint Raphael. At the end of the bridge was Arco del Triunfo (Arch of Triumph) a bridge gate. The bridge gate had a high foundation on which Doric columns supported a classical entablature. Above the door was a panel with inscription mentioning the visit of King Felipe II to Corboda in 1570. 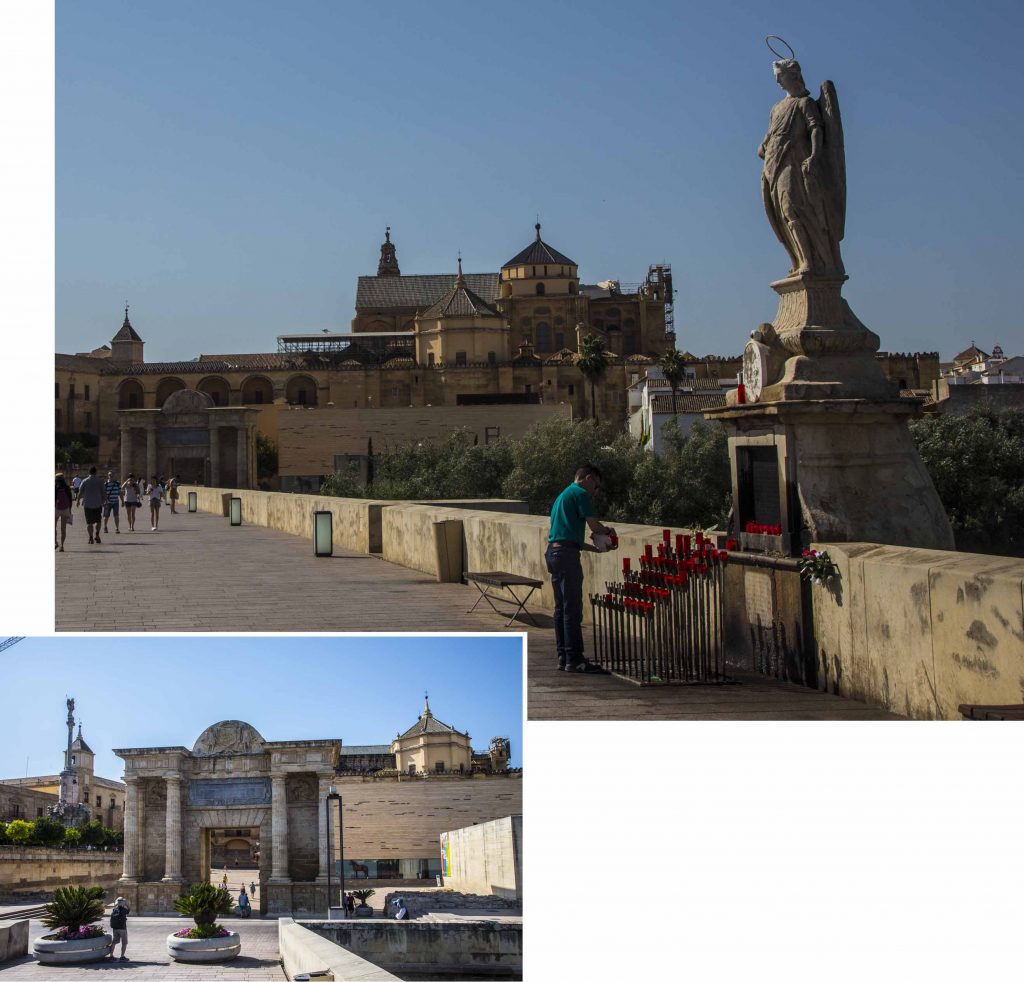 After the gate we walked into Plaza del Triunfo (Triumph), in the Plaza one of the most prominent structures in was Triunfo de San Rafael de la Puerta del Puente (Triumph of San Rafael of the bridge gate ). It was one of the many triumphs in the city of Cordoba. This one was dedicated to the archangel San Rafael, the guardian angel of the city.

The tallest building (54 m)  in the city was the bell tower of Mezquita-Catedral de Cordoba. It was originally a Muslim minaret which was converted into a bell tower after the Christian conquest. In 1589 an earthquake affected its structure and a new tower was built which enveloped part of the Caliphate remains. 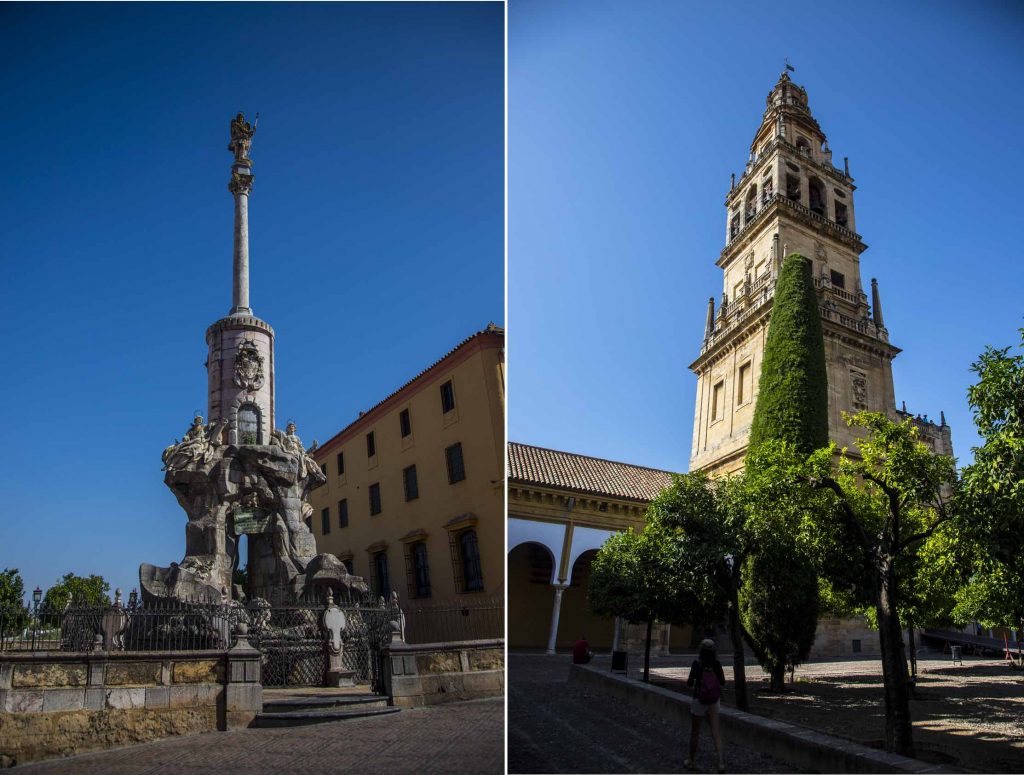 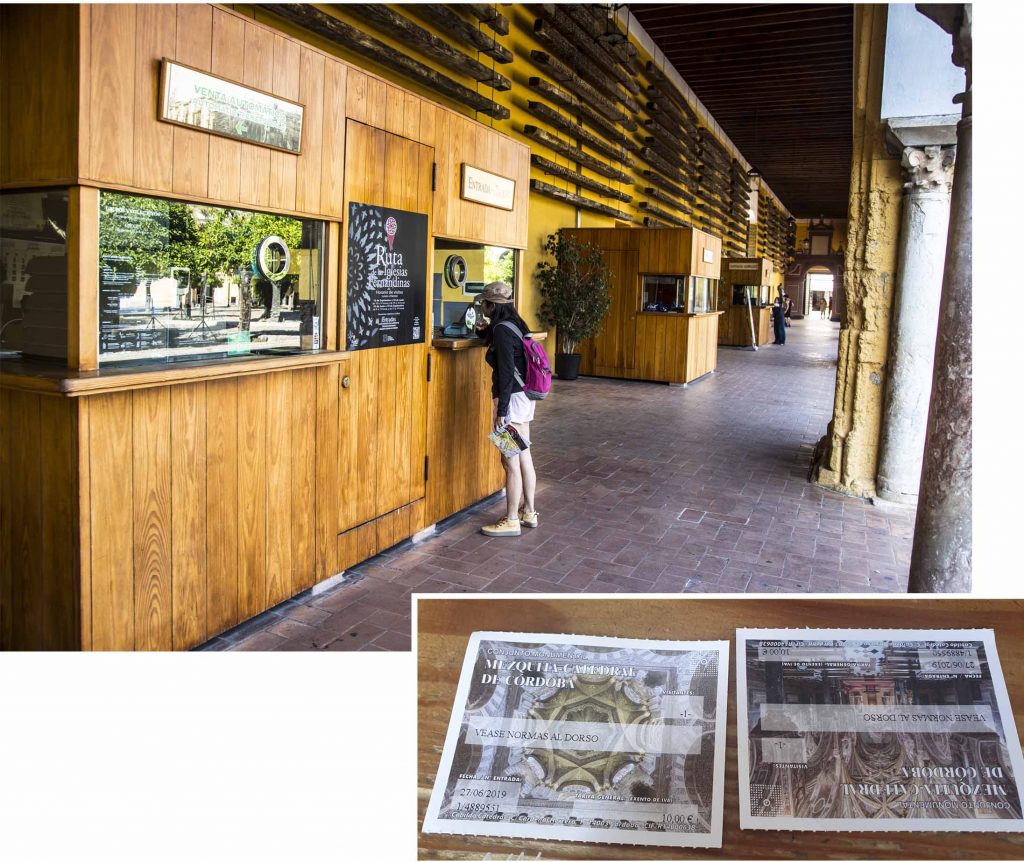 The interior of Mezquita-Catedral de Cordoba was amazing! We came to a hall with endless rows of columns with double arches, the design of the hall was fascinating. This was a “hypostyle hall” (a hall where its roof rest on pillars/columns) with 866 columns constructed from jasper, onyx, marble, granite and porphyry. The pillars held up double arches which consisted of a lower horseshoe arch and an upper semi-circular arch. The alternating red and white wedge shape stones that formed the arches made this hypostyle hall so uniquely different! 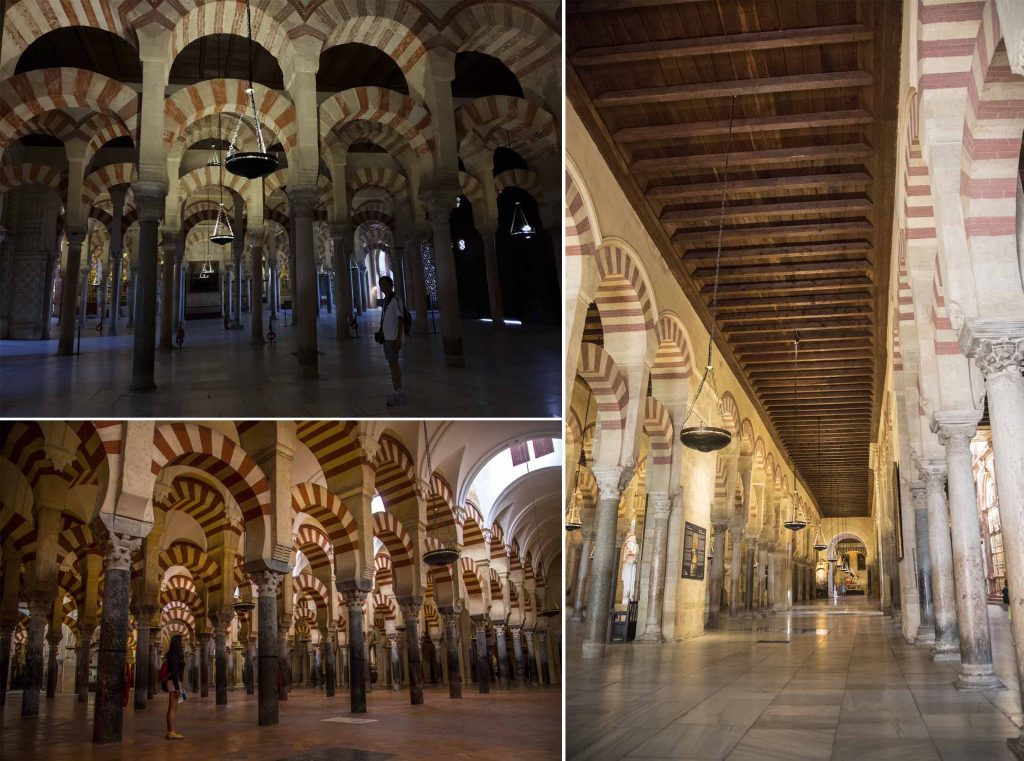 It was believed that the site of Mezquita-Catedral de Cordoba was originally a Christain church which was divided and shared by Muslims and Christians after the Islamic conquest. This sharing arrangement lasted till 784 when the Christain half was sold to “Emir Abdal-Rahman I” who then demolished the original structure to build the grand mosque of Cordoba on the same site. 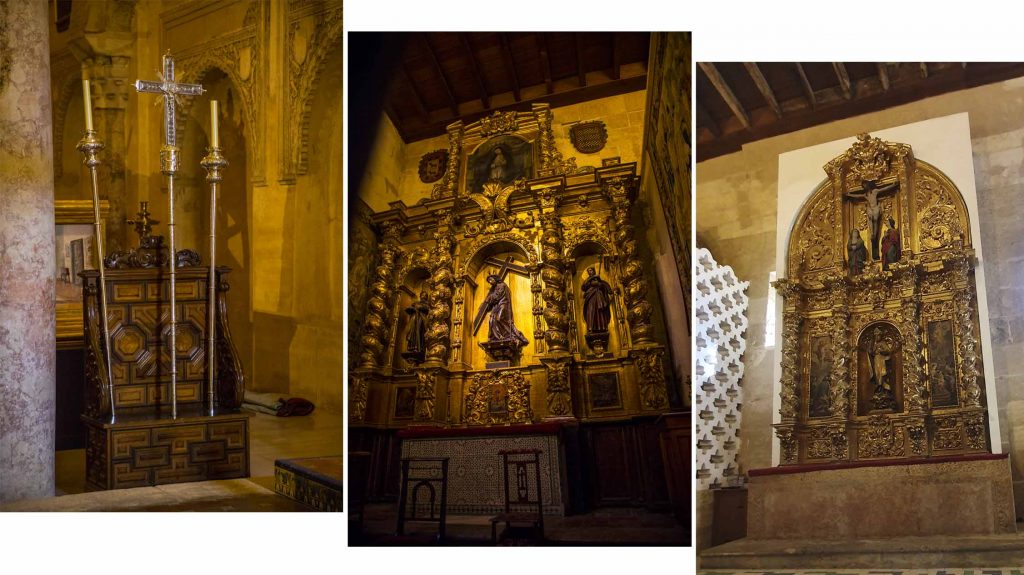 There were many rooms and each room was filled with fascinating “treasures”, statues, paintings, ancient artifacts. The architecture of the building adopted a “muslim style” and yet many displays in the rooms were “christian” stuffs. No wonder this place was called Mezquita-Catedral, a mosque and yet a cathedral.

Surprisingly there were not many to toursts visiting this beautiful place, which in a way was wonderful as it kept this entire place very serene and peaceful. The quiet ambience was just nice for us to explore the place slowly at our own pace as we drifted from room to room. The “muslim” architecture was lovely! We stayed on until the place closed at 7 pm. 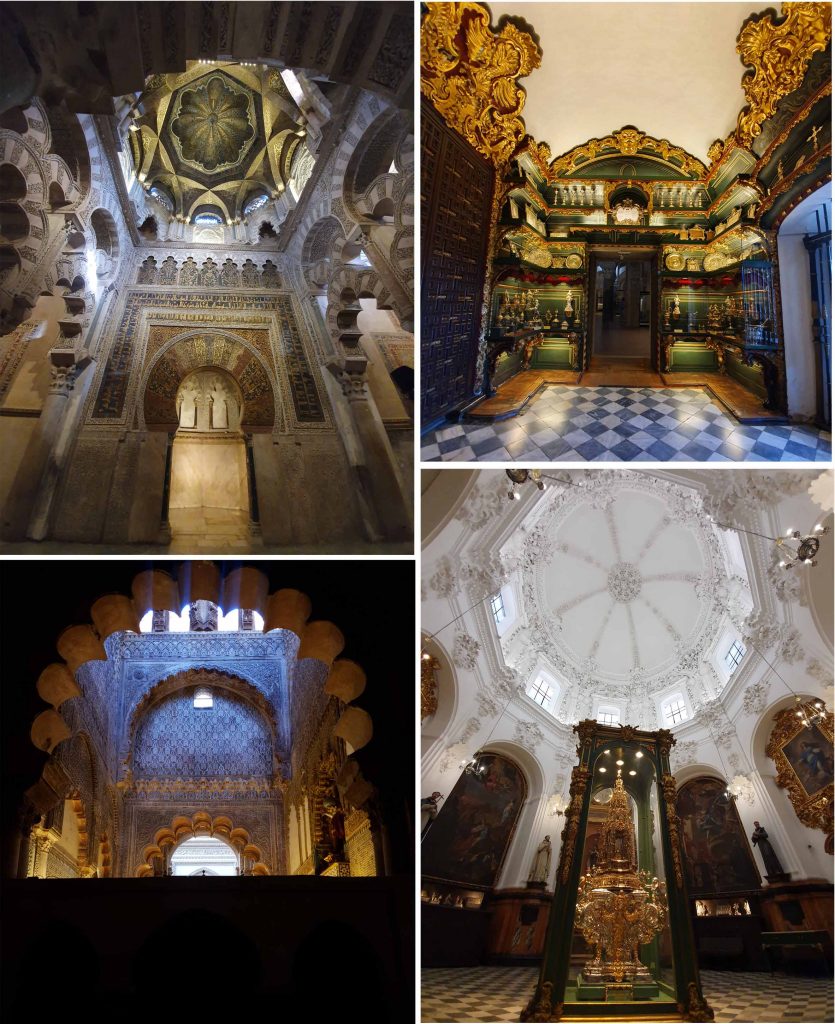 After Mesquita – Catedras de Corboda we went to explore the old town. It was a clean and quaint town with  many cafes and restaurants. There were some visitors walking around town but generally the place was not pack with people.  We did not stay long and left after another hour. 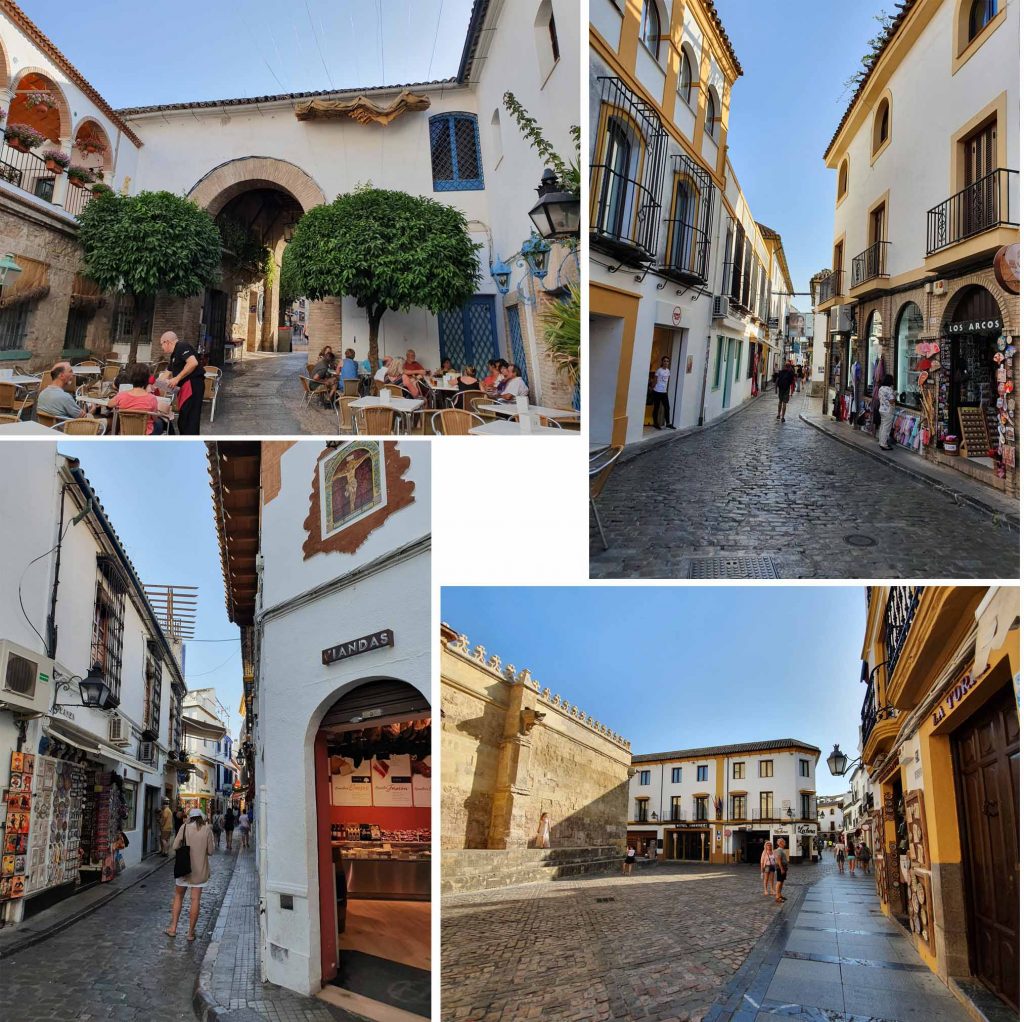 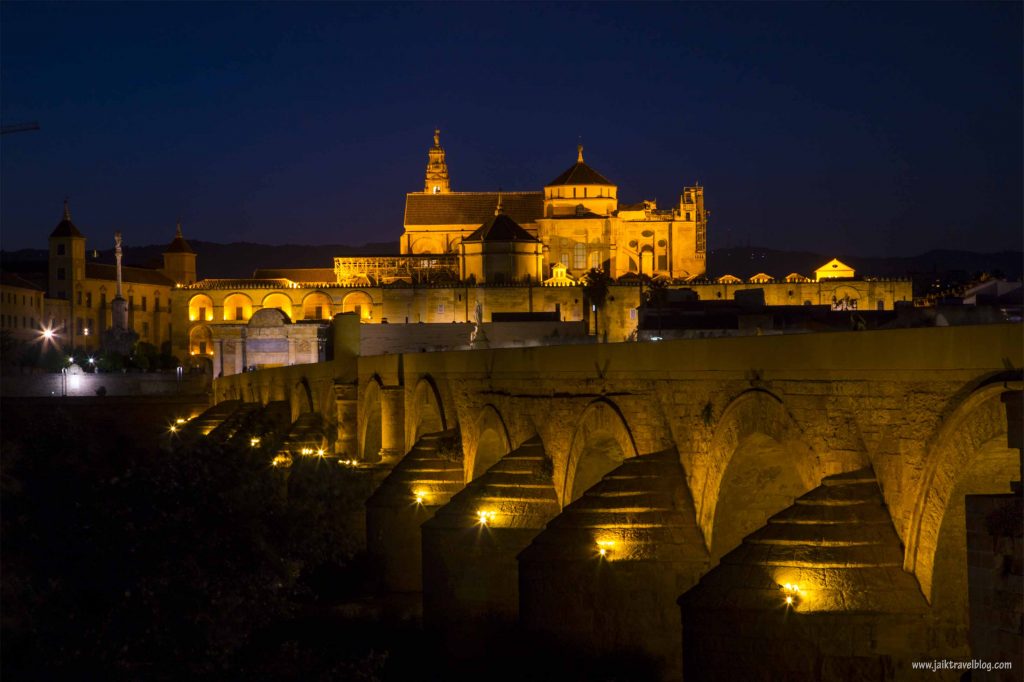 The cost of the double room was €69 per night. It did not include breakfast and parking charges onsite was €16.50. The reservation was done on booking.com. 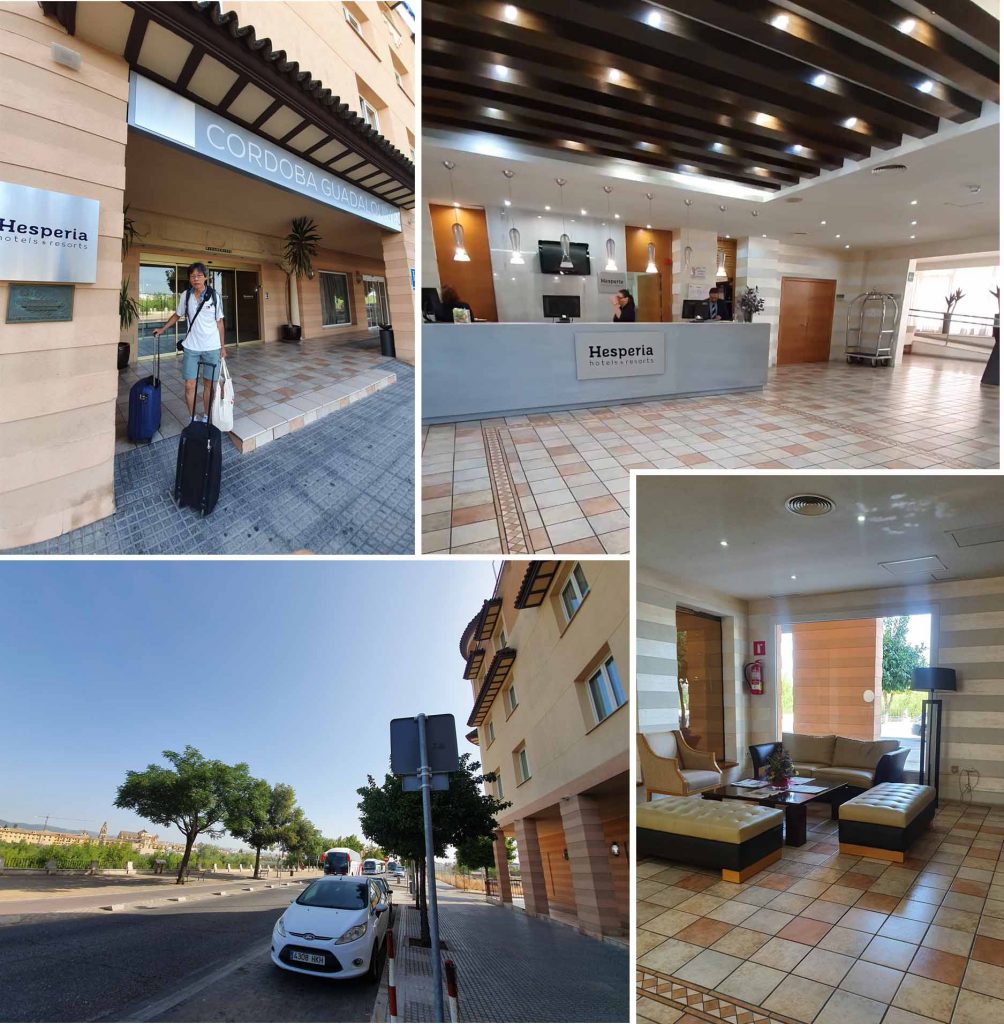 Our double room was on the second level. It was large, clean and comfortable. The room did not came with kettle or microwave. But no worries, we had our own portable kettle/pot so we could make tea any time. 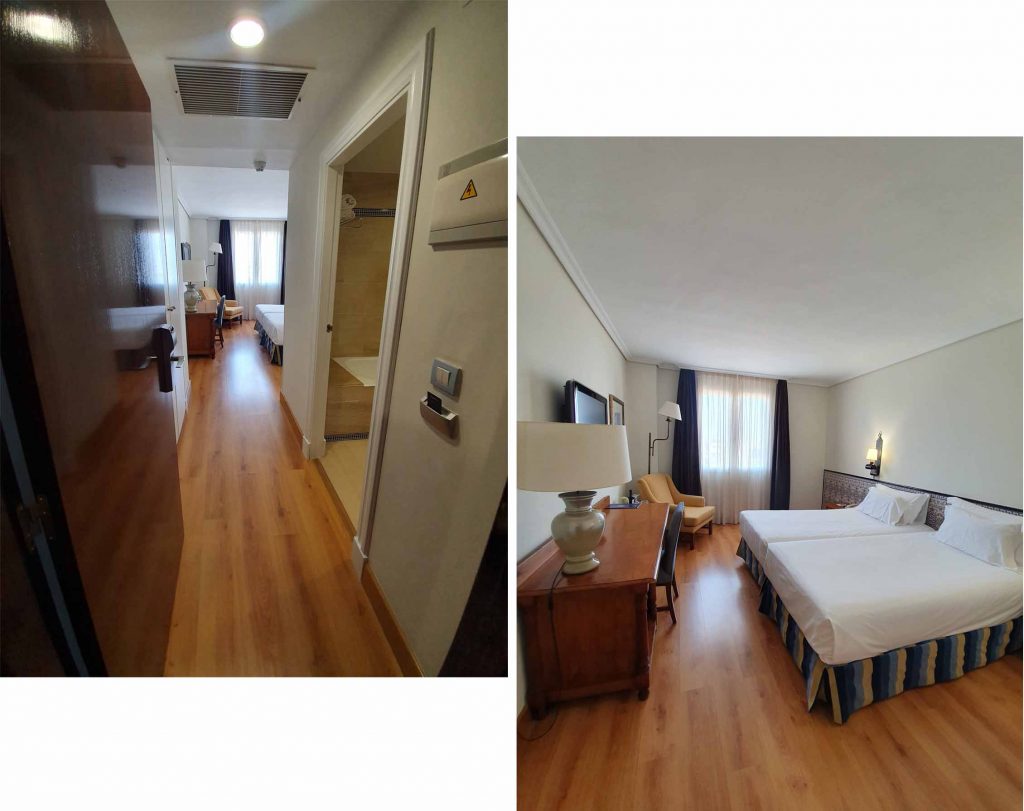 The bath room was clean, and large with shower and bathtub. 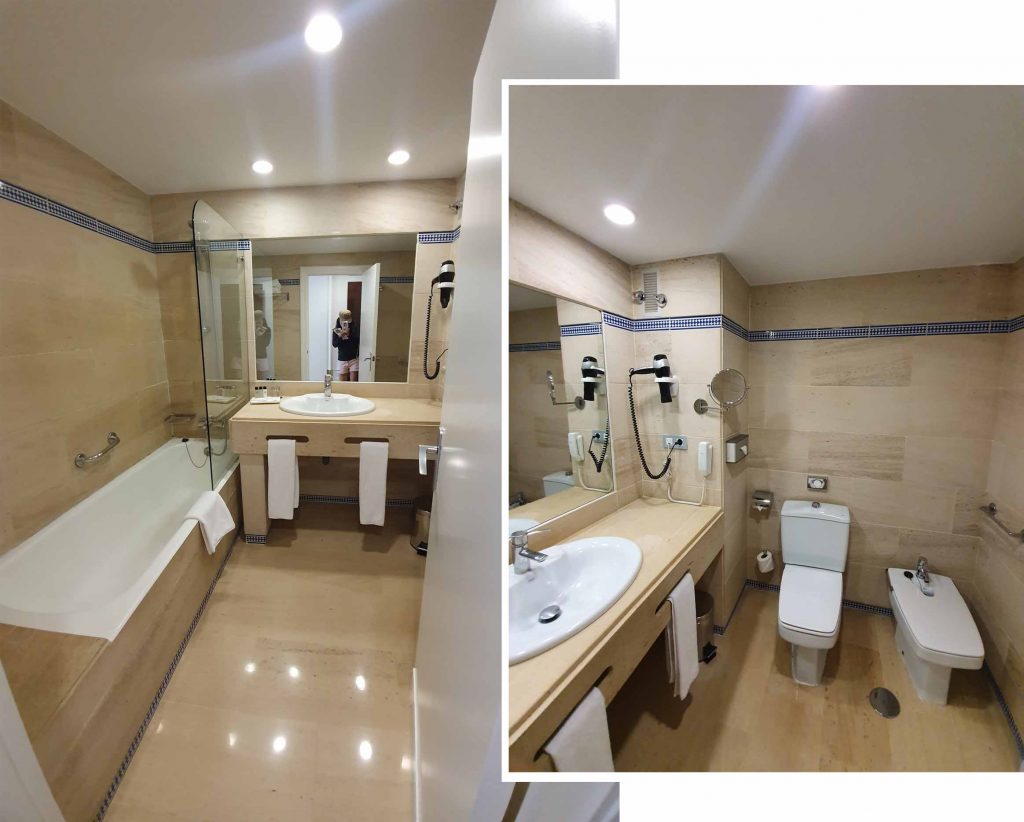 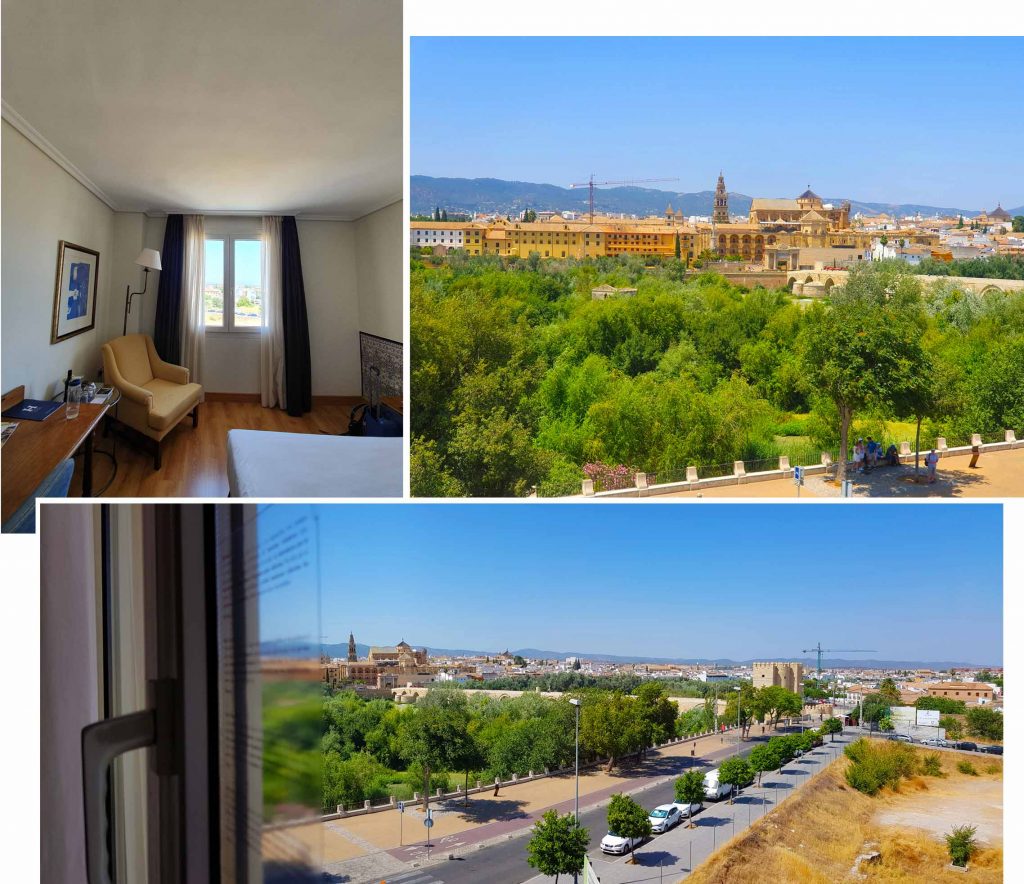 Window view from our room

Onsite parking was provided by the hotel at €16.50 per night but we did not use it at all. The roads immediately behind, beside and infront (to the right) of the hotel had free street parking. After parking we only needed to walk 50 m to the entrance of the hotel!