We drove from Cordoba to Daimiel Tablas wetland, unfortunately the weather was horribly hot so we did not get out of our air-conditioned car to explore the wetland. We drove on to Consuegra to see the amazing windmills. The sight of these windmills during sunset was incredible. For the night we stay in Consuegra town and visited the windmills the next morning again. 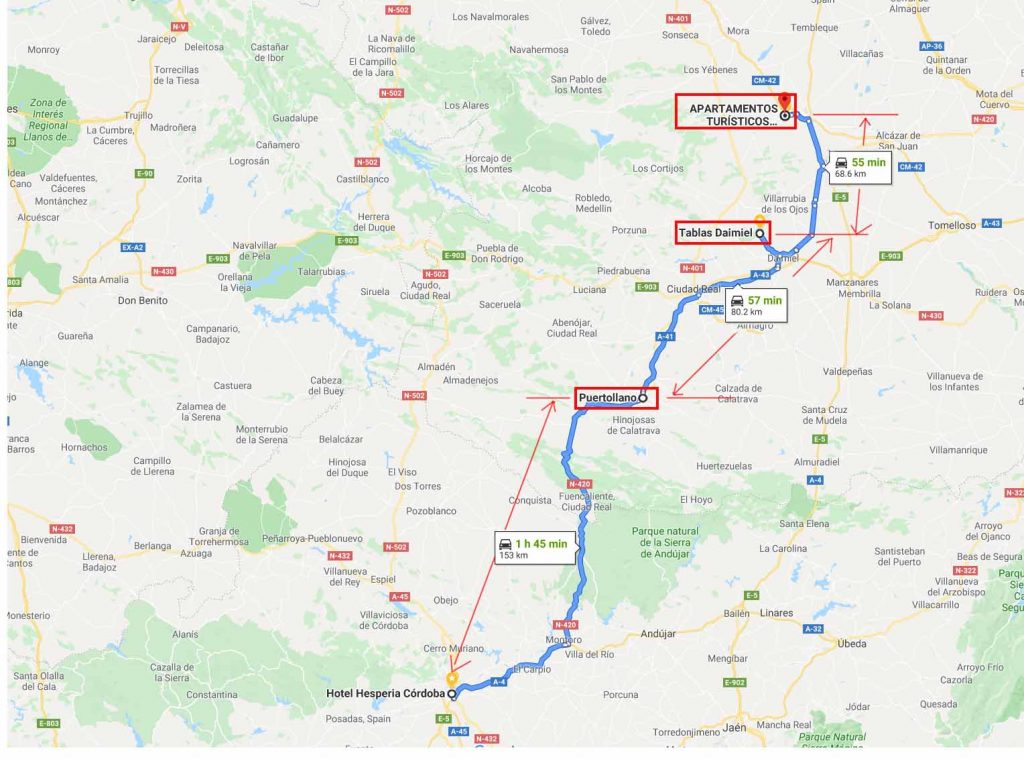 Our first coffee break of the day was in the town of Puertollano. It was about 1 hour 45 minutes drive from Corboda when we detoured into Puertollano for a coffee break. We parked our car by the side of the road, the parking charges was €0.95 per hour. We dropped in a euro dollar coin and got a ticket with slightly more than an hour of parking. We left the ticket on the dashboard of the car and walked down the road in search of a cafe. 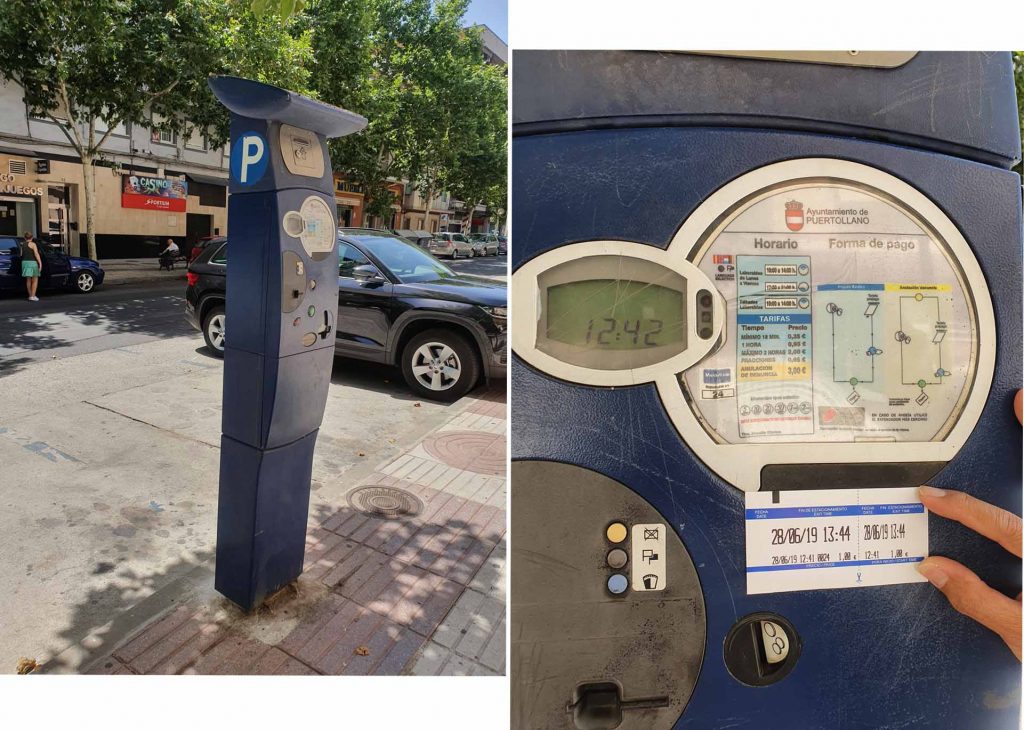 We had a nice coffee break at El Rinconcito de Raul. The cafe latte costed €1.20 per cup. The weather was turning very hot so we were very reluctant to leave the air-conditioned cafe to get back to our car and continue our journey. 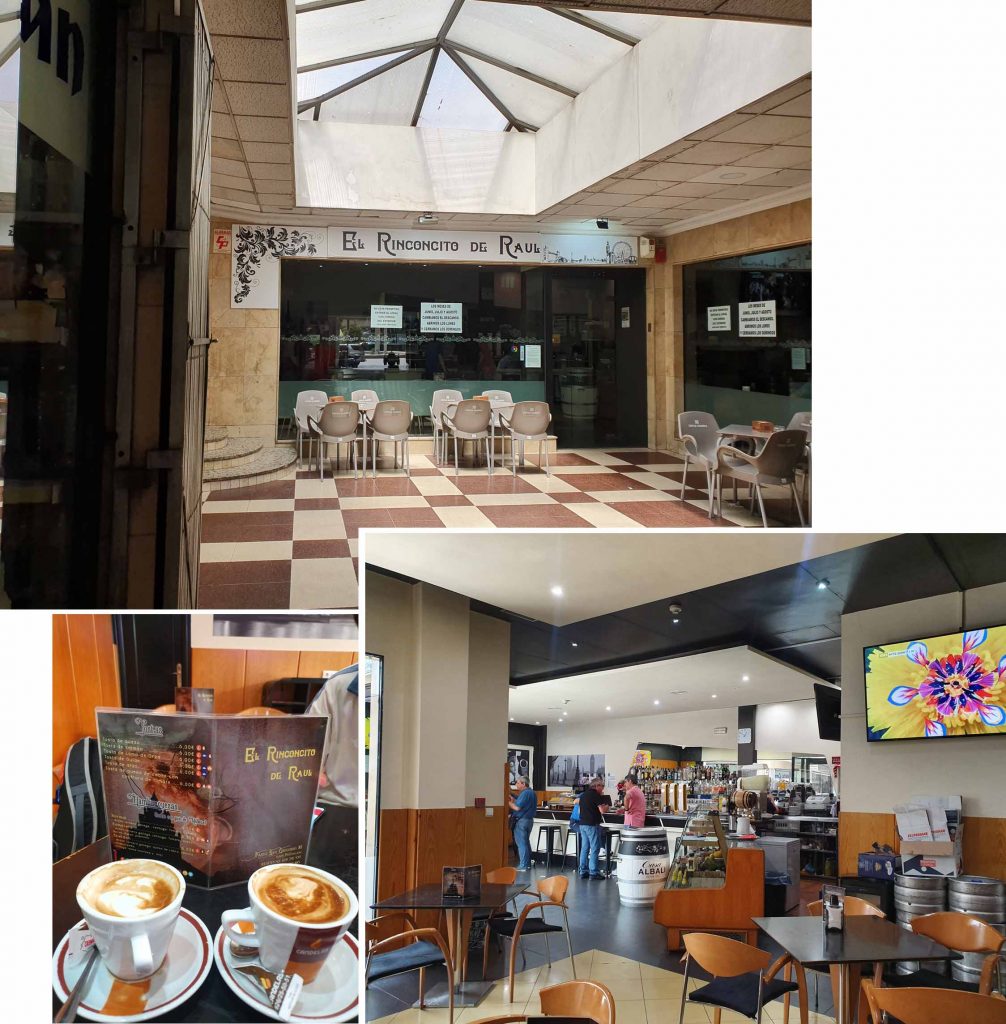 Tablas de Daimiel was a wetland that was located near to Consuegra Windmill our final destination for the day. We put the wetland in our itinerary list as we thought that it would be nice to experience some fauna and flora of Spain wetland. Unfortunately like all wetlands it was kilometres and kilometres of open land, all exposed to the sun.  We reached the wetland visitor center (co-ordinates: 9.137999, -3.696871) at about 2.30 pm. We were surprise that the center was deserted and closed! We did not step out of our car because the temperature outside was incredibly HOT, it was 44°C (111.2°F)! 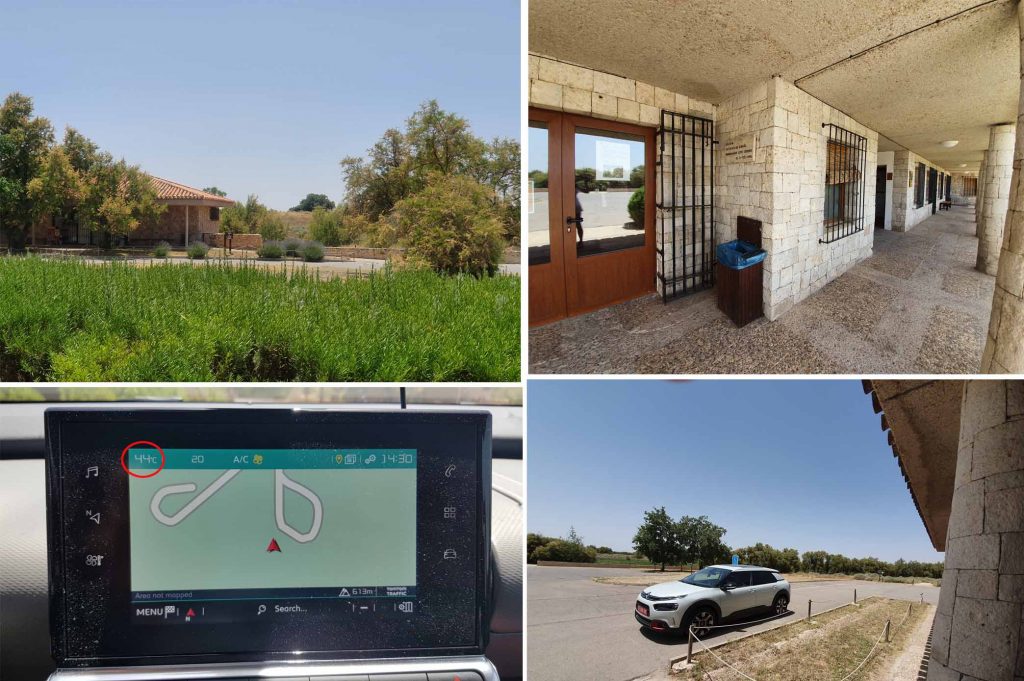 The wetland had a boardwalk but we did not know where the boardwalk began as the visitor center was closed and there were nobody around to ask. The hideous temperature outside the car was unbearable  so we rather stayed in the car and turned on the air conditioner full blast.

From Daimiel de Tablas wetland to Consuegra was about 1 hour for 69 km. Near the end of the journey we missed a turn off the highway, somehow the exit was not there. Our car GPS told us to exit but there was no exit! So we had to make a big loop to get into Consuegra. After dinner we walked up a hill behind our stay to visit Consuegra windmills.  The walk as more strenuous that we expected. 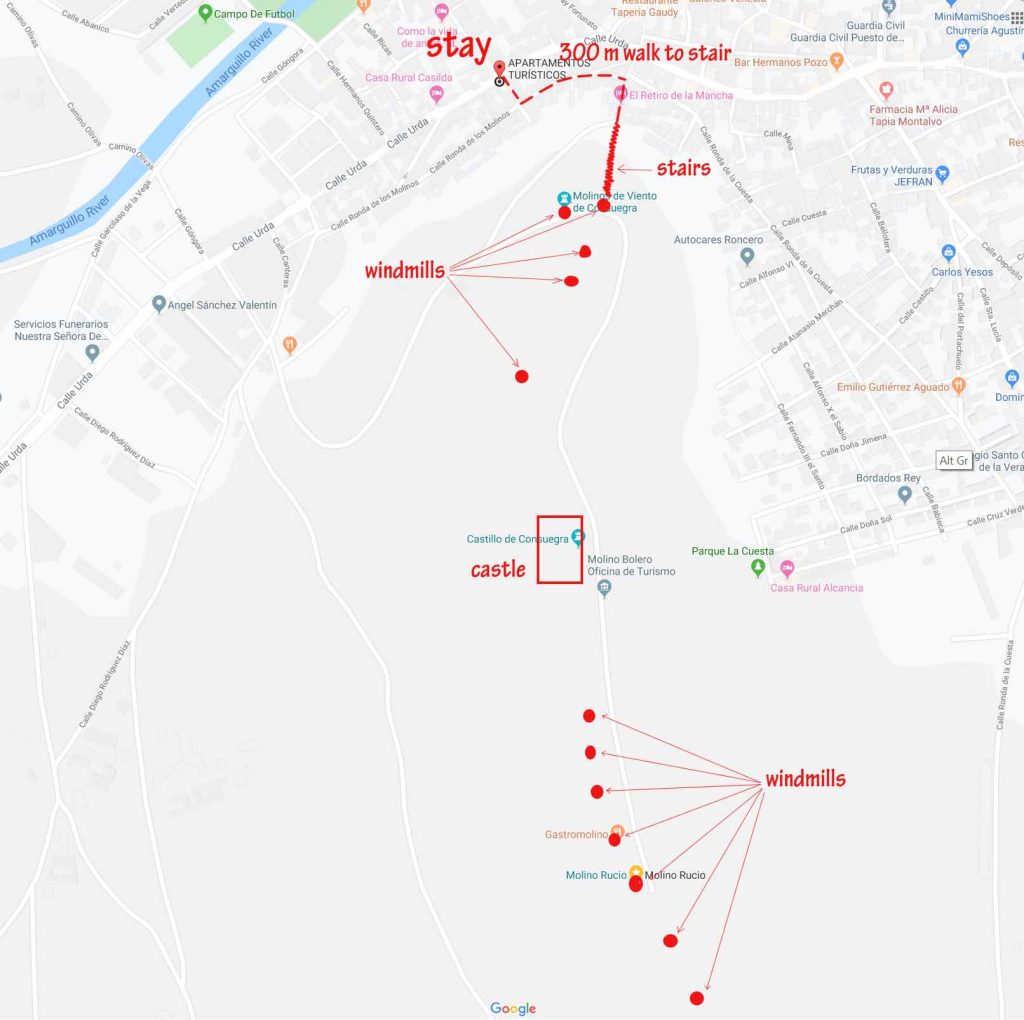 walking route from our stay to the windmills

From our “stay” we walked up some steps by the side of our apartment, the steps joined to a pathway running along a slope behind a stretch of houses. After walking another 300 m we reached a stairs that led up to the windmills. It was about 9.15 pm and the sky was still bright. We could see that the sun was setting. 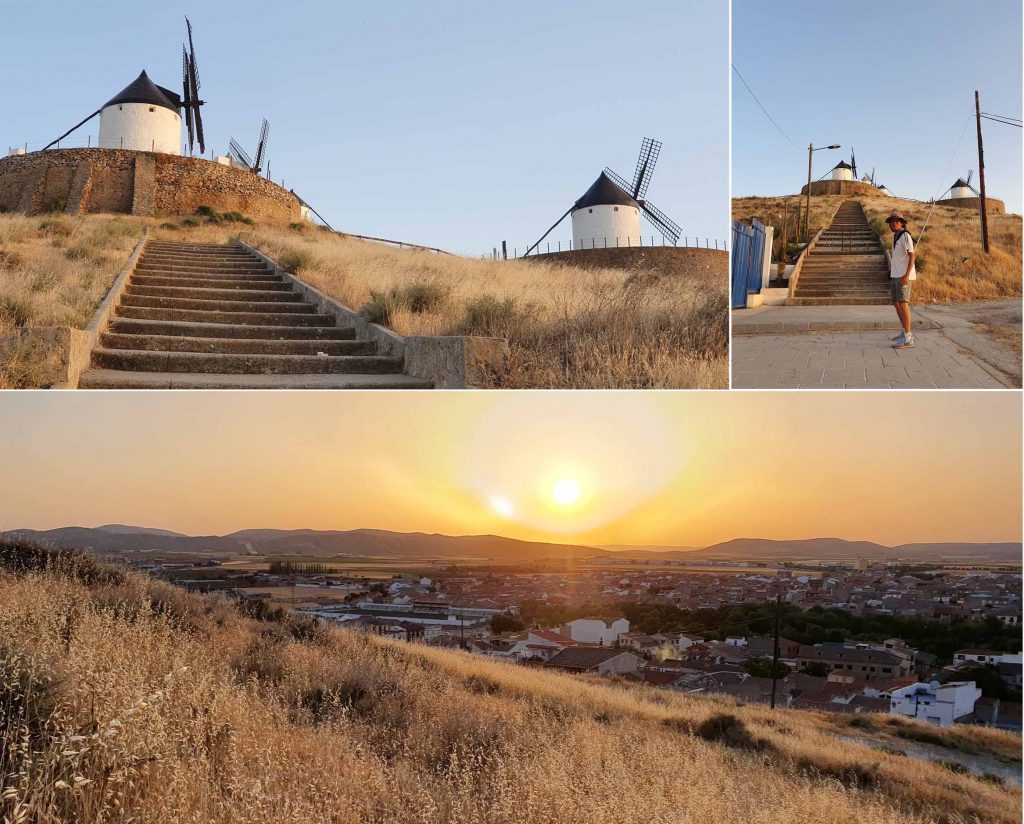 On our way up to the windmills

From the first windmill to the last was about a 1 km walk. There were two clusters of windmills with a castle/fort in between them. The first cluster consisted of five windmills and there were seven in the second cluster.

We walked from one willmill to the next and near the 2nd last windmill of the second cluster we stopped, found a place to sit and wait for the sun to set. The sun became a huge golden ball gradually lowering down to the horizon. It was an amazing sight. 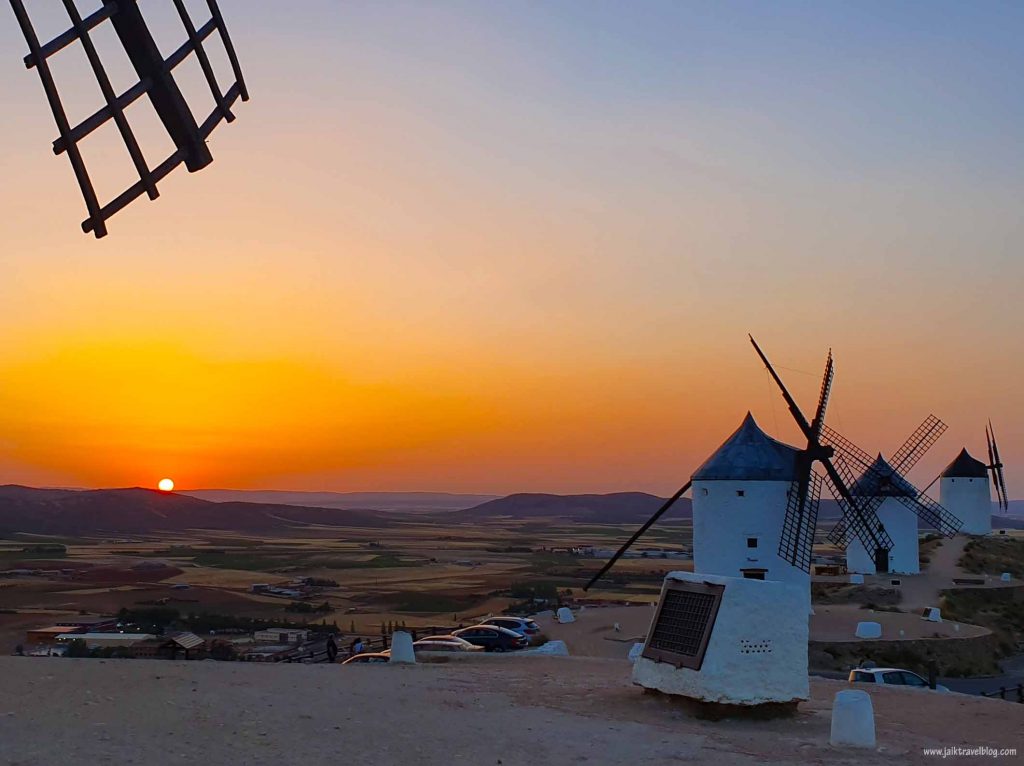 The setting sun at the windmills of Consuegra

After the sun disappeared over the mountain ranges the sky began to darken slowing turning bluer as the minutes went by. The wind up the hill was very strong. I had to hide by the side of the windmill to take cover from the wind. Yat Thong was “monkeying” around clinging onto a stone bollard. 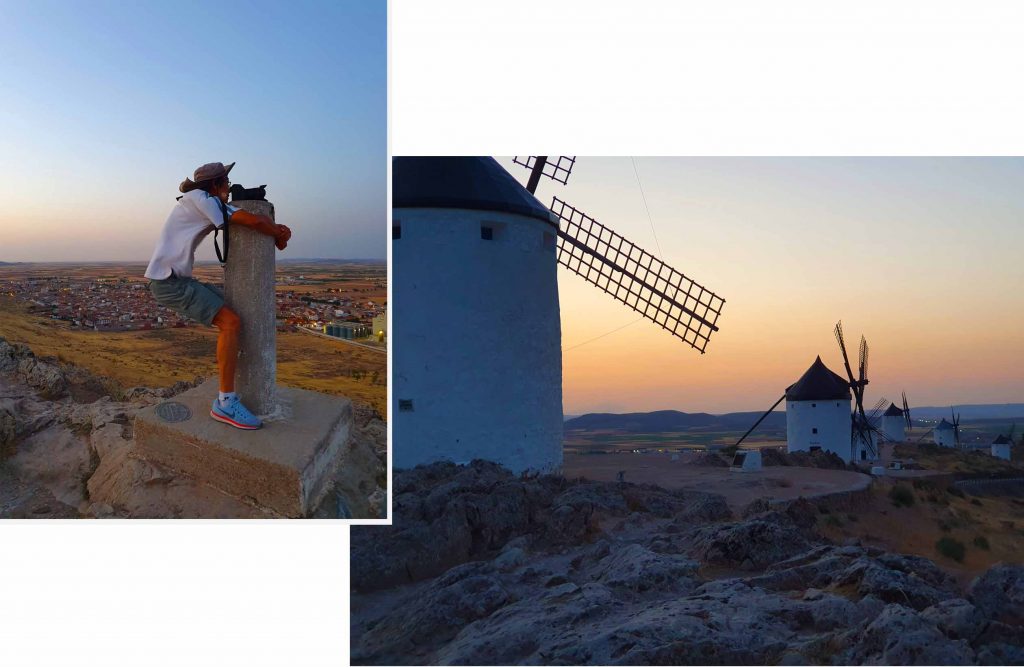 Having fun up the hill of windmills

It was already near 10 pm and there were no visitor but us on the hill. The cars were making their way down the road leaving the “Windmill Hill”. Our “stay” was just a short distance from the windmills and whatever time we left we would be in the comfort of our room stay” in 10 minutes. With that thought we felt no urgency to leave. 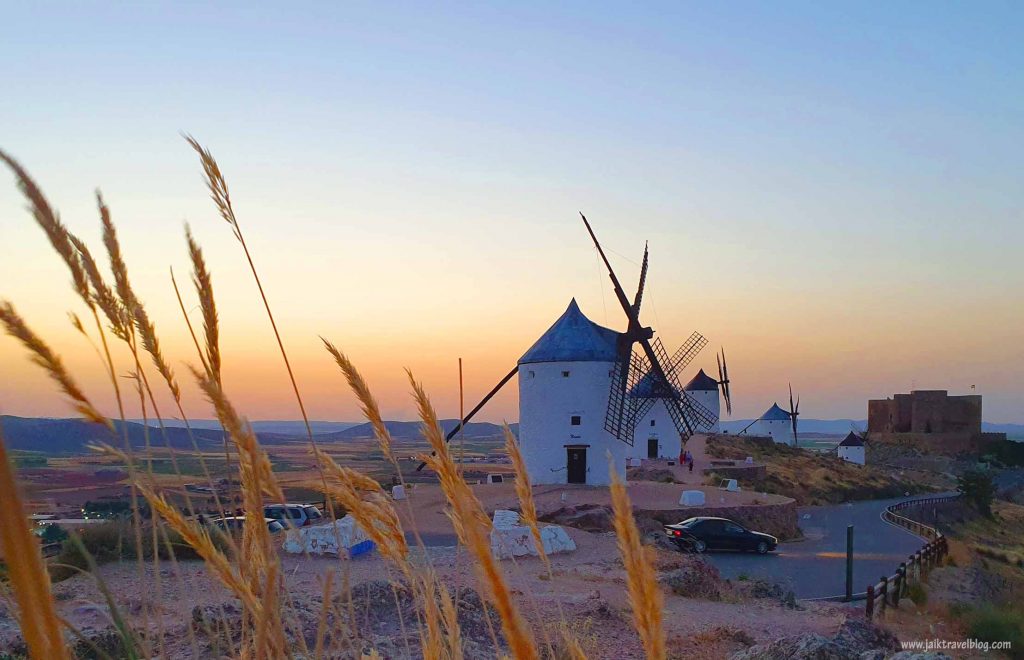 We remained on the hill to enjoy the beautiful scenery as long as we could. The colours of the far away horizon was evolving every mintues. Its colors were amazing there were lilac, orange, golden, yellow and blue. Soon the windmills lighted up and the scenery took on another dimension of “beauty”! 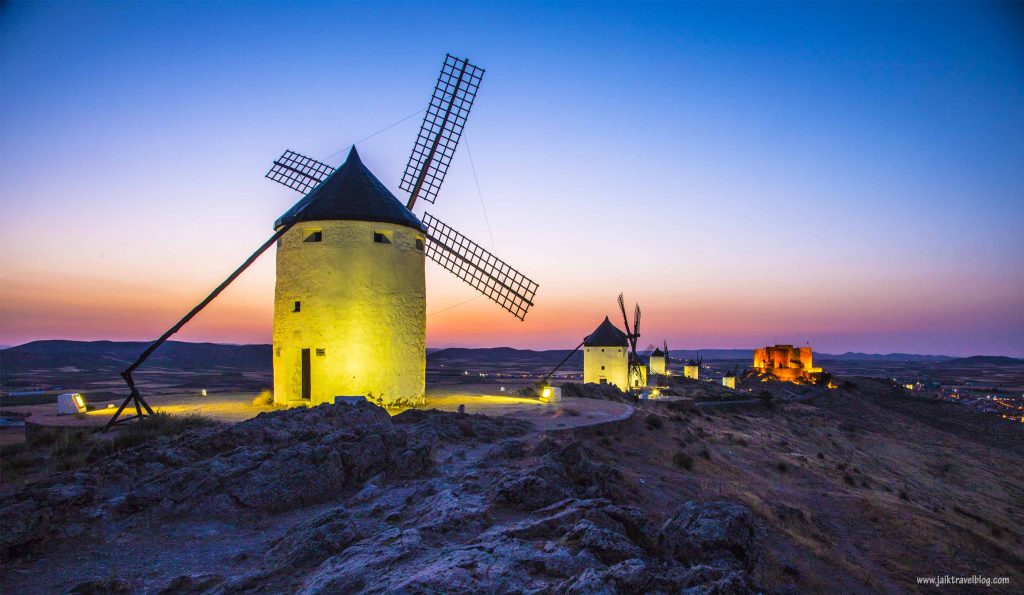 We waited until the sky turned all black before we left. It was about 11 pm when we walked back to the “starting” windmill then went carefully down the stairs with the flashlights from our handphones lighting the way.

The next morning before we left Consuegra, we visited the windmills again as we wanted to see how theylooked in the bright day. This time we went up by our car which was definitely so much less tiringly. 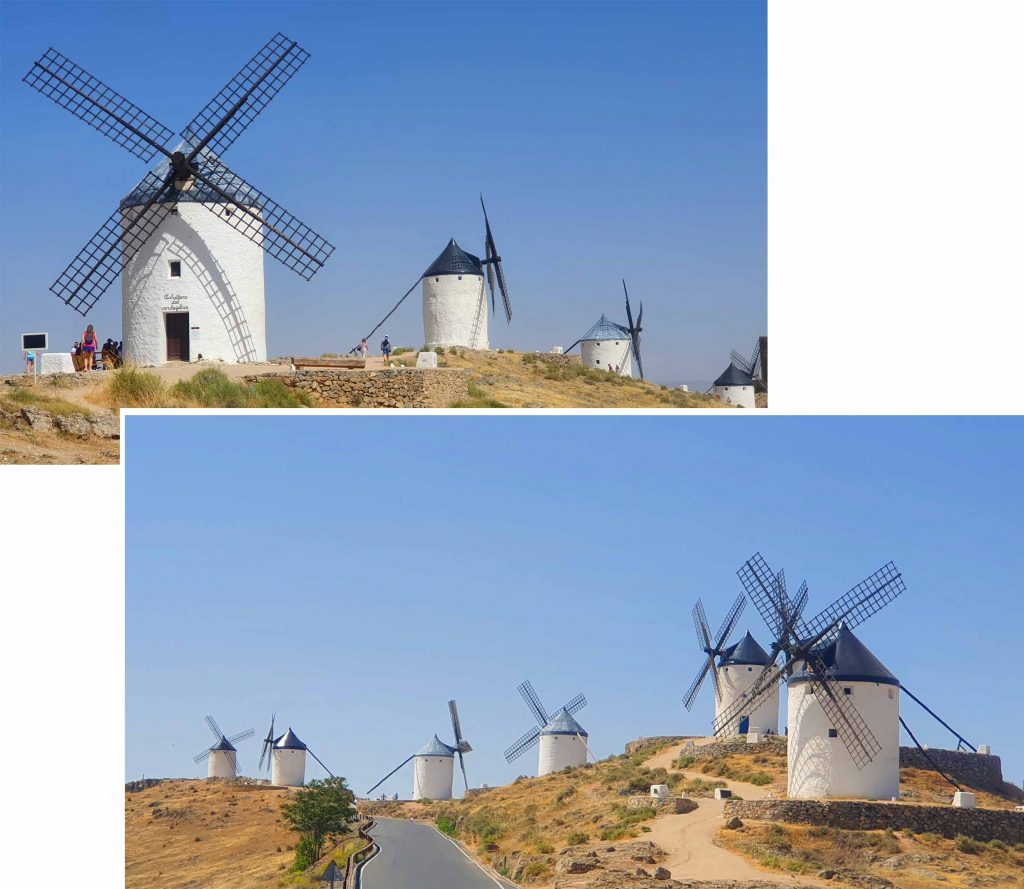 Windmills of Consuegra in the morning

We booked “Apartamentos Once Molinos” from booking.com. It was a studio apartment on the roof terrace. The cost of the apartment was €59 a night and onsite parking was €5 per night/stay.

Our apartment was on the 4th level  which was the roof terrace. The interior of the apartment was not very large and it came with a kitchen. The apartment being on the roof was quite hot and bright in the day. We had to keep the blinds down to cut off the bright rays and the aircon blasting to cool down the place. 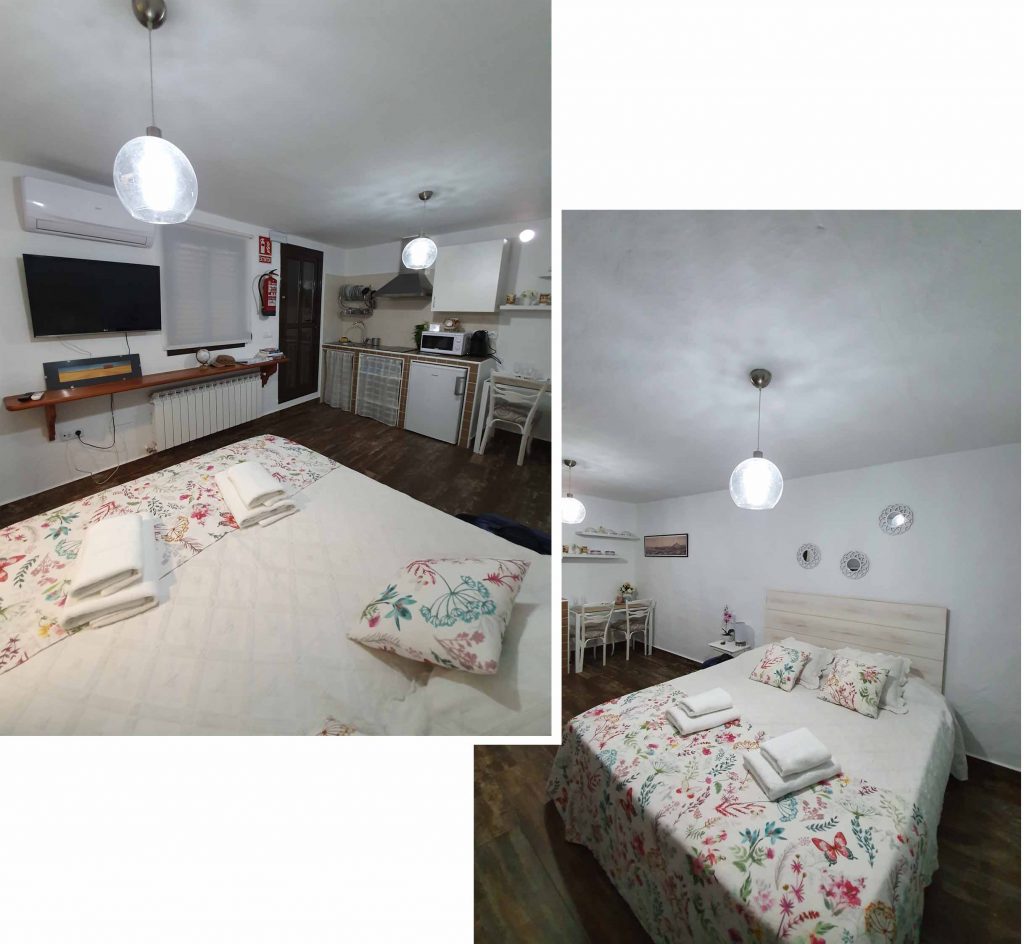 Apartment on the roof terrace

The bathroom in the room was rather small, it was just a narrow stretch at one side of the room. Generally the studio apartment and its toilet was clean and neat. 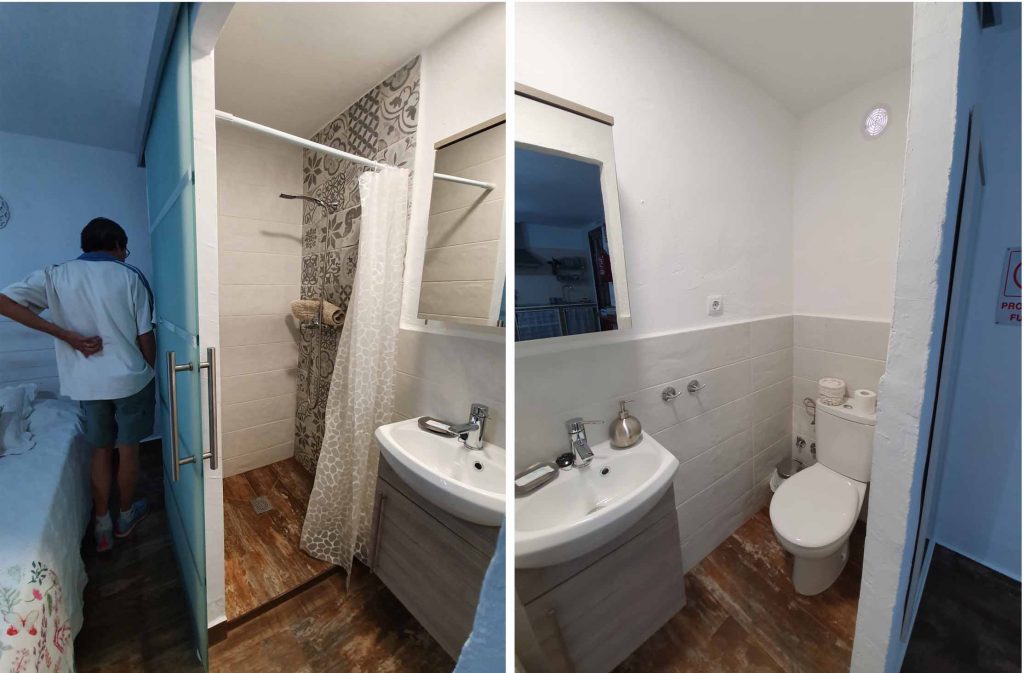 Toilet and shower in our studio apartment

One of the reasons we were willing to pay a higher price for the small apartment was that it was on the roof terrace with a view of the windmills. 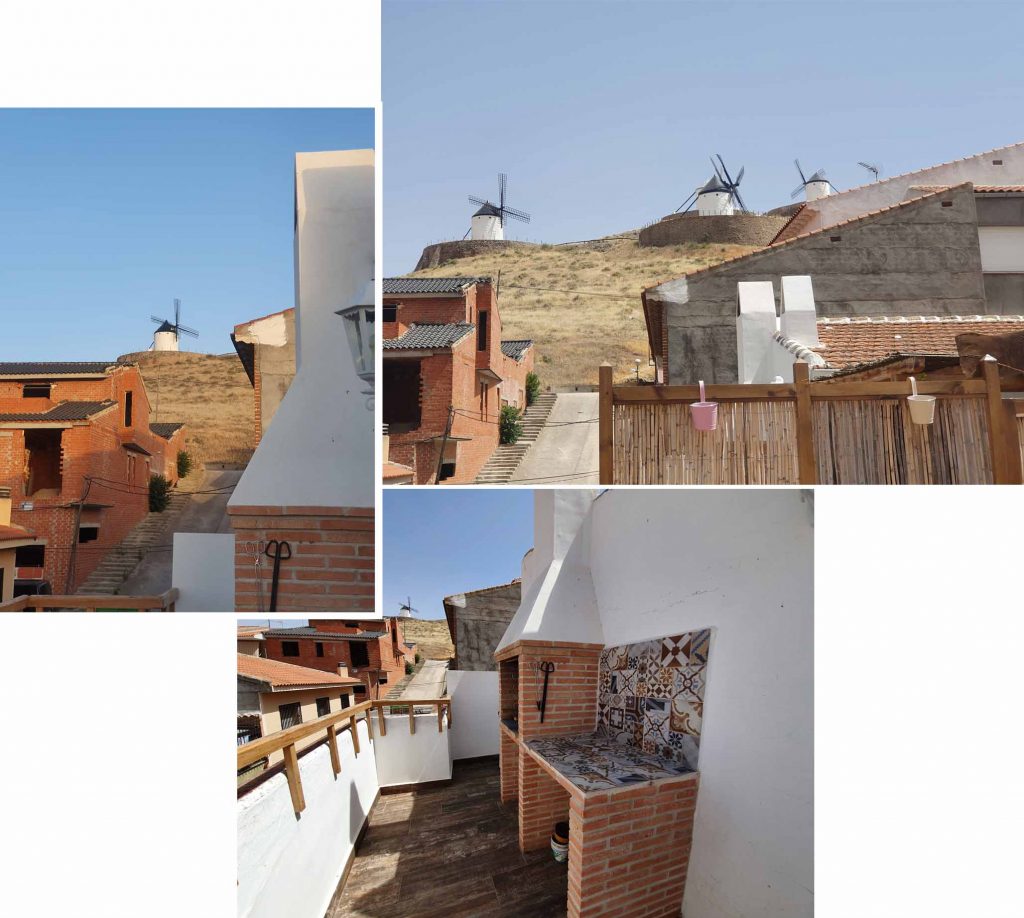 Windmills of Consuegra as seen from our stay

On arrival we found that the information in the booking listing was INCORRECT. The  “roof terrace” was divided into two sections. The “Apartment with Terrace” had a much reduced size roof terrace while the larger section was converted to a shared roof terrace assessible to all the other units in the building. 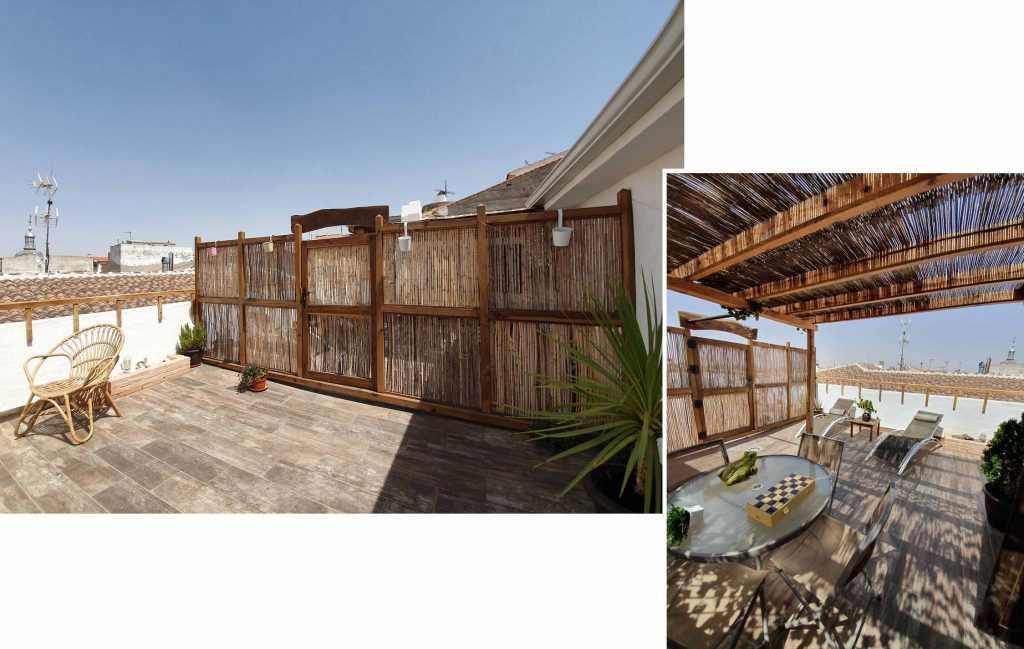 Shared terrace (left) & Our private terrace (right)With the roof terrace given access to all units, we ended up having little privacy on our “reduced” terrace. We had to keep  both the filmsy terrace door (on our side of the terrace) and our apartment door close all the time for better security.

We cooked two meals at our stay. There were supermarkets close by so we drove to one of the supermarkets to pick up some stuffs to cook our meals. 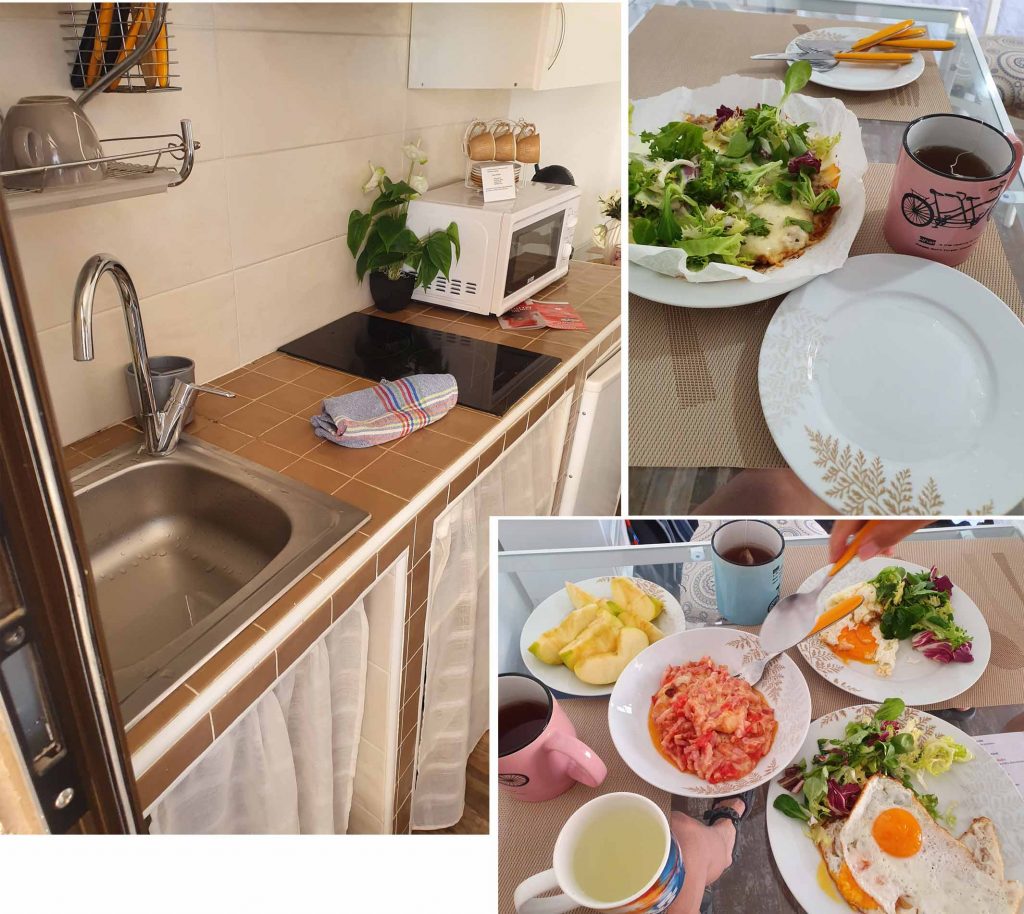 Dinner and Breakfast at our stay

Generally we liked Apartamentos Once Molinos for its location, its proximity to the Windmills of Consuegra. As for the our unit “Apartment with Terrace” it was too hot to “live in” during summer. Another unit on the lower level would be better and we could still come up to the shared terrace for a view of the windmills any time.

We did not like the fact that there was a missing washing machine in our apartment (it was listed in the booking). We purposely paid for on site parking so that we could bring up our clothes to be washed. If we knew that there was no washing machine in the apartment we would park our can on the street which was just a short walk to the apartment. We feedback to the host the inaccuracy of its information on the booking.com website and hopefully she would correct them for future customers